A first-time mum has revealed how she had to give birth without her husband by her side after he was involved in an horrific accident days before their baby arrived.

Skye shared her story with Tiny Hearts Education, to reveal how quickly life can change and the moment which led to her partner watching her labour over Zoom.

The Adelaide-based couple said everything turned upside-down in ‘five seconds’ on the Tuesday before her son Xander was born. 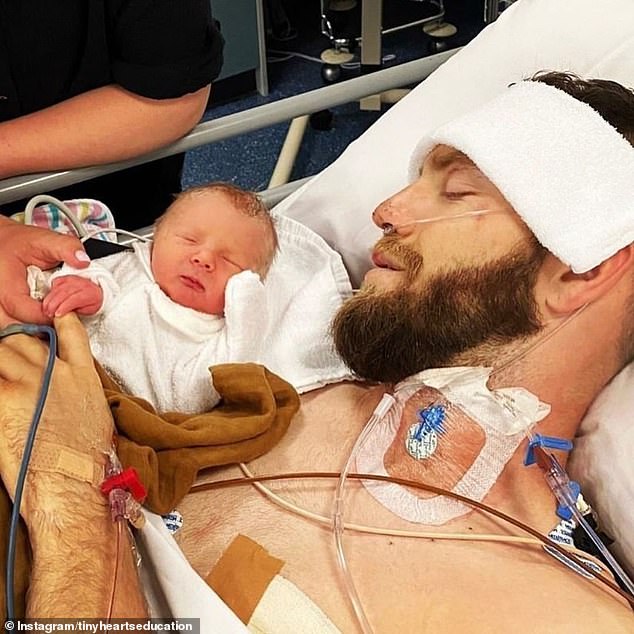 Xander and his dad Josh, pictured, ended up staying ‘just down the corridor’ from each other in Adelaide Hospital

Her partner Josh had been excited to go for his ‘last bike ride before baby was born’ but was involved in a terrible accident which left him ‘unresponsive and gripping to life’.

‘He was choking on his own blood, barely breathing. It took 2.5 hours to get him stable enough to transport him via helicopter to the hospital,’ she revealed.

But friends hadn’t alerted the young mum of the nature of the accident, initially explaining he had been taken to hospital for a knee injury.

Skye had been struggling with gestational diabetes so they didn’t want to worry her.

She learned how desperate things really were when she got to hospital and was told she had three minutes to ‘say goodbye’ before he was taken into surgery.

‘We were told his injuries were the worst some of the surgeons have ever seen and that he should not be alive,’ she said.

‘His body has been through an extreme amount of trauma. He has broken ribs, collapsed his lung, split his spleen in half, lost his kidney, broken his back, cracked the top of his pelvis, ripped the muscle of his pelvis, shattered his knee cap, and had a major internal bleed requiring four units of blood. Along with bruising and puncture wounds over his body.’

Josh went into surgery for six hours after Skye’s visit.

Heavily pregnant and unwell Sky was left wondering if her baby would grow up ‘without his daddy’.

At 1.30am, the Friday after the bike accident, Skye went into early labour.

She was ‘just down the corridor’ from her badly damaged partner but he couldn’t be moved to watch his son’s birth.

‘It was at this stage we got Josh on the phone via Facetime. His friend had to hold the phone as he was too weak to hold it. After an hour and 30 minutes of pushing, Xander was born,’ she said.

‘This is not how we had planned our little boy’s arrival, but we have made the best out of a terrible situation, and our little man was already so loved by his daddy, who had a visit every morning and night.’ 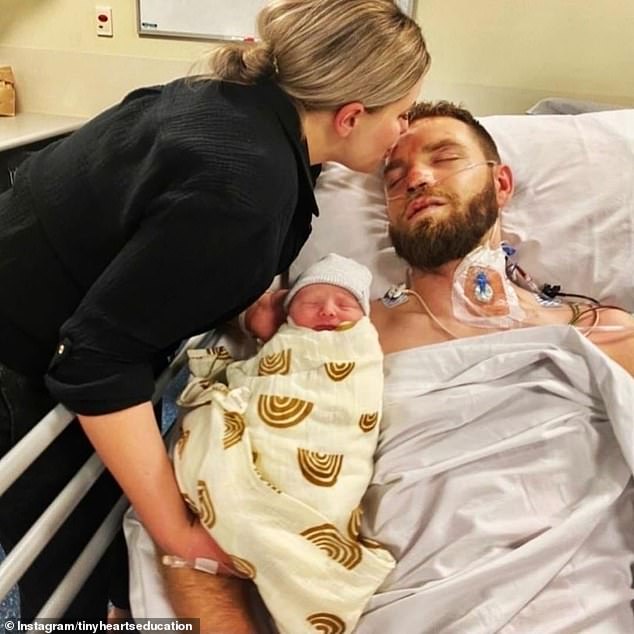 It has been seven months since the accident which almost took Josh’s life, he has not been admitted to  hospital for complications from the accident for over two months

It has been seven months since the accident and two months since Josh has had to be admitted to hospital for complications.

And the story, which was published by Tiny Hearts on Instagram, proved to pull at fans’ heart strings.

Many praised the mum for being so courageous in the face of adversity.

Others sent their best wishes to the family.

‘This is heart-breaking! I just hope he is recovering,’ said another.

‘Oh gosh so scary! Glad he survived. Thinking of them all,’ wrote another woman.