‘How did I survive as a kid?’ Husband shocked after receiving a VERY strict list of instructions from his wife on how to pack school lunches

An Australian mum has revealed her husband’s hilarious response to a five-point text missive she recently issued detailing exactly how he was to make school lunches.

Taking to Facebook to share her husband’s reply, the mother explained she created the list ahead of scheduled surgery because one child was a fussy eater and the other suffered from autism – and their kids’ school didn’t come with a canteen.

Her list included extensive instructions on how sandwiches were to be packed, what sort of fruit or snacks were eaten by which child, plus a reminder to always include ice packs.

‘How did I survive as a kid?’ he replied jokingly. ‘Sandwiches and chips on one side, Prima in the middle and a bit of fruit on the other.

The woman said her husband had asked her to send him the list ahead of her scheduled hospital visit so he could start practising preparing his kids’ lunches.

‘Yes, I know its a lot, and I know that we grew up on Vegemite sangas, a bag of chips, apples and a Prima and we survived,’ she said.

The woman added although her list seemed like a lot, the family had routines around meal prepping so cut up vegetables and fruits were always on hand.

‘Sandwiches or wraps in separate containers,’ she wrote.

‘Then in Yum Box cucumber, carrot, strawberries, hummus in the little tub (only for her, he will have cheese and chive dip), kabana, crackers, cheese, frozen banana bread or muffin.

‘In a separate container for her she needs fruit boost so just some grapes and watermelon cut up.

‘Ice packs for their lunch bags are in the freezer. They’re black. They go in compartment at the back.

‘Put Yum Box in, sandwich container and a bag of popcorn each on top. If wrap, she just has cucumber, ham, lettuce. Oh and yoghurt pouch for them,’ she concluded. 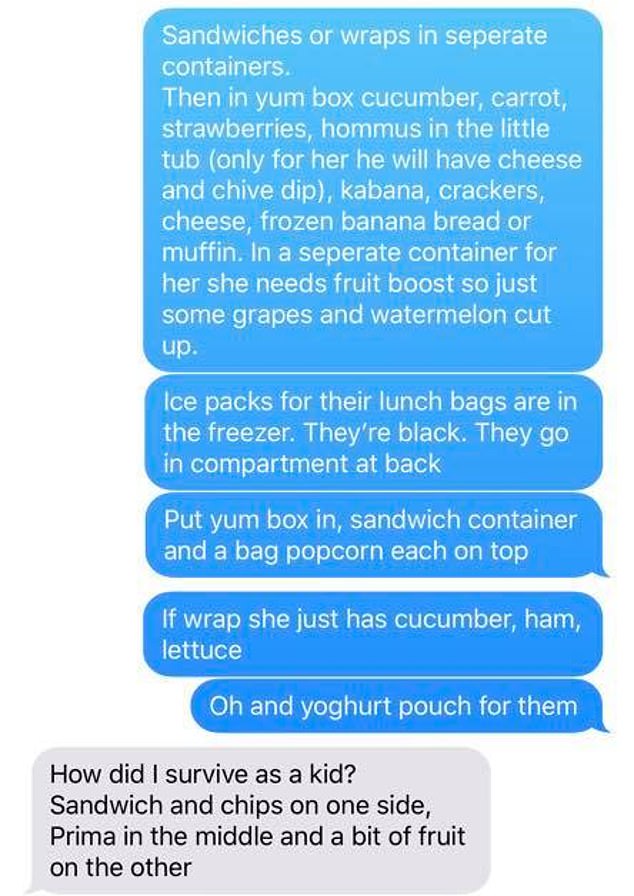 Many parents who saw the post online were quick to say they sided with the dad in terms of his response to his wife’s instructions.

‘Not gonna (sic) lie,’ wrote one person. ‘I didn’t even read all the instructions. That was too much. I’m with hubby, chips and a sanga!’.

‘No offence but it seems a bit excessive. Most blokes would say shove it and send an apple and a Vegemite sandwich,’ another wrote. 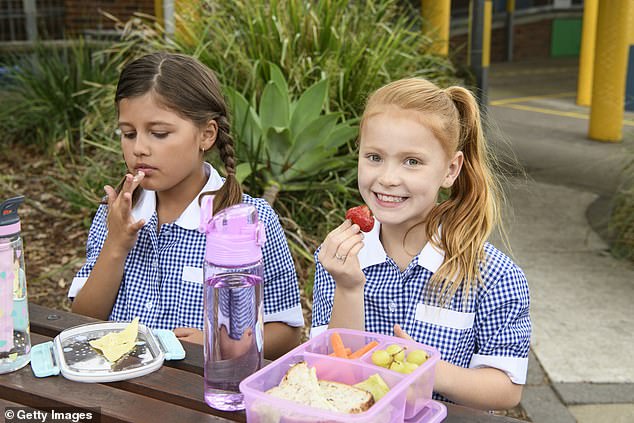 The mum did find a few supporters thought with some commenters saying if they had to pass on instructions about lunches to their partners, their lists would be similar.

‘My daughter has pretty much the same lunch as yours,’ wrote one. ‘Love our Yumbox. And I would have been sending very similar instructions.’