‘I’m just finishing a bit of croissant, I’m ashamed to say that but there you go’: Huw Edwards leaves BBC viewers in stitches as he wipes his mouth live on air during local election coverage

Hugh Edwards has left BBC viewers in stitches after he wiped his mouth and admitted eating a croissant live on air during the channel’s local election coverage.

Reeta Chakrabarti was presenting the latest local elections figures at a screen in the BBC News studio when the camera panned back to an unsuspecting Edwards, who initially licked his lips before having to wipe away crumbs with his fingers.

He had anchored the BBC’s coverage overnight, which ran from 11.40pm on Thursday night to 6am this morning.

He thanked Reeta, before telling viewers: ‘I’m going to admit to you that I just had a little bit of croissant.

‘So I’m just finishing it and I’m ashamed to say that, but there you go. It’s 20 to six in the morning.’

And viewers have taken to social media to share their enjoyment of the incident.

One said: ‘Huw Edwards eating a croissant is the only #LocalElections22 news you need today.’

Another added: ‘Choosing a croissant when you have to appear on live TV is BOLD. I’m impressed there’s no flakes of it in sight.’

A third said: ‘I love watching that man on TV. He could eat a three course meal during the news and I would forgive him and watch.’

Huw Edwards initially licked his lips, before having to use his fingers to wipe away crumbs from the croissant 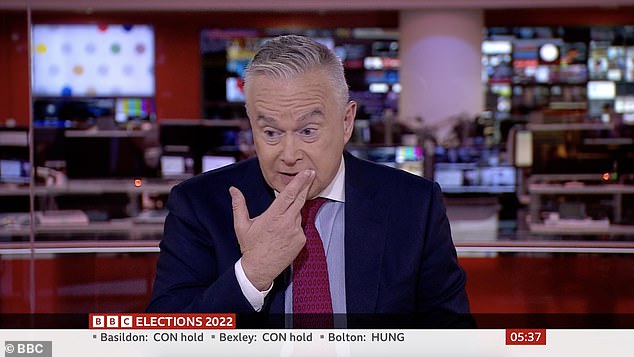 He had been presenting the BBC’s overnight coverage of the local elections, which ran from which ran from 11.40pm on Thursday night to 6am this morning 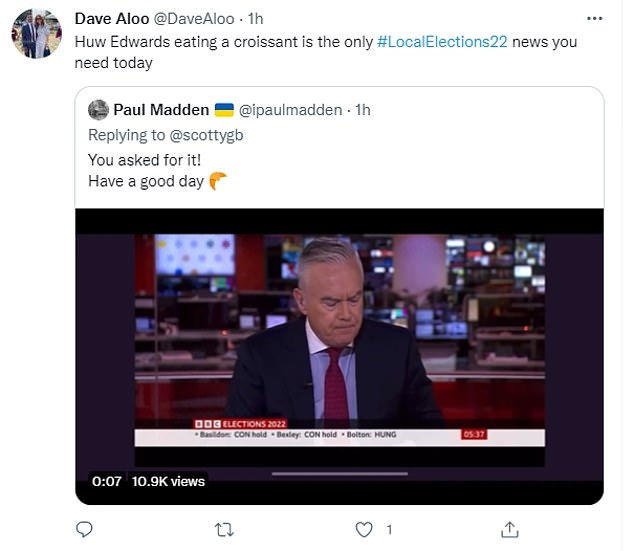 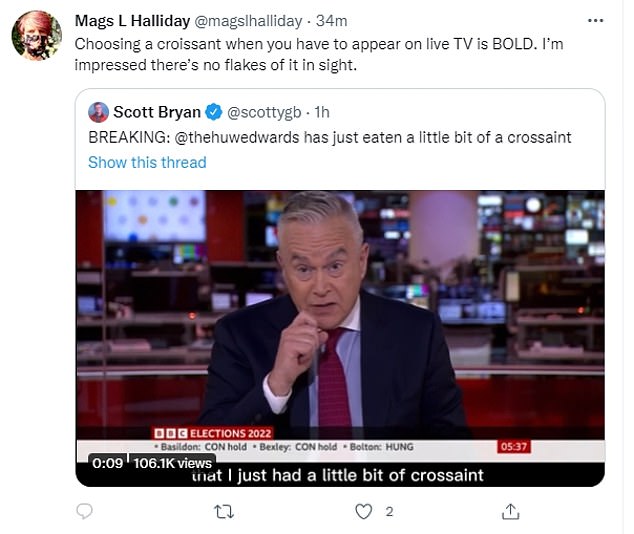 Others have referred to the news presented as a ‘national treasure’ and told him not to be ashamed.

Another added: ‘We’re going to croissant over now to our reporter at the polling booths.’

And a third said: ‘Big Bite of Croissant (BBC) news is undefeated.’

It comes as Boris Johnson is today facing demands to quit from furious Tories as the party suffered a local election nightmare in London – but Keir Starmer failed to make big strides towards power.

After a campaign dominated by sleaze and Partygate, the Tories were defeated by Labour in the totemic strongholds of Wandsworth and Westminster – which they have held since 1978 and 1964 respectively. 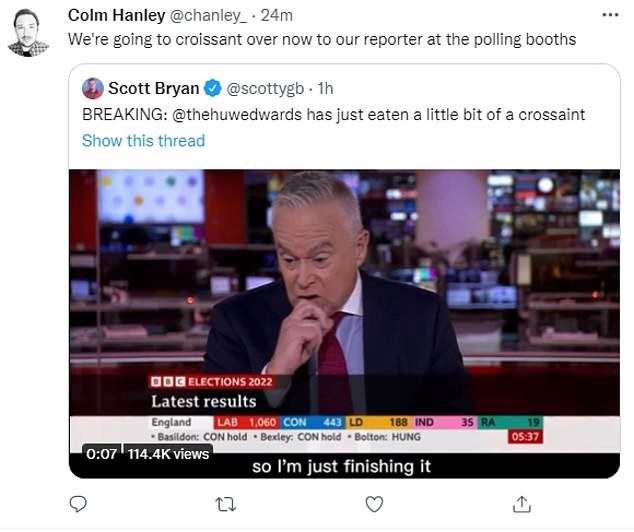 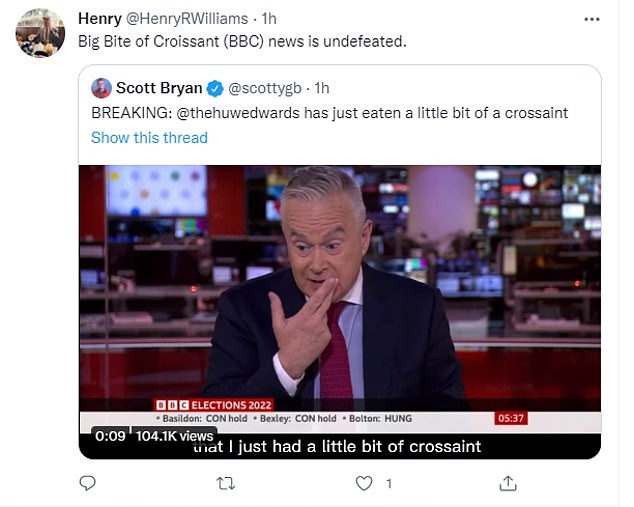 The Conservatives also lost Barnet and Southampton to Labour and West Oxfordshire and Worcester to no overall control.

As counting continues, livid local leaders are already turning on the PM, ordering Mr Johnson to ‘look in the mirror’ and consider whether he should stay.

But so far the results have not been as apocalyptic as some had predicted, with voting guru John Curtice saying Labour still does not look in a position to win a majority at the next general election.

He added: ‘Outside of London, as compared to 2018 when these seats were last contested, it looks like their seats are down slightly.’

‘And for a party that is trying to regain ground in the so-called Red Wall seats in the Midlands and north of England, this wasn’t quite the progress they wanted.

‘There is still a very substantial legacy of the impact of Brexit on both the character of the Conservative and Labour supporters.

‘The Conservatives are still much stronger in Leave areas, and therefore Labour is still struggling to make more progress there.’

Sir Keir described Labour’s gains as ‘absolutely brilliant’ and a ‘big turning point’ for the party.

Speaking to Labour campaigners in Barnet, he says: ‘We’ve changed Labour and now we’re seeing the results of that.’

However, the leader of the Labour group of Barnet council, said this was less of a reflection on enthusiasm for his party and more a reflection of disillusionment with the Tories. Barry Rawlings told BBC Radio 4’s Today programme: ‘I’ll be honest, it’s not us being wonderful.

‘I think a lot of Conservatives haven’t voted this time, I think they feel alienated from No 10 and that they are, I don’t know, they’ve been disappointed with Boris Johnson and so not voting and I think that’s made a difference as well.’