Three Manhattan hotels — the Trump International, Hyatt Place Times Square and Hampton Inn Times Square — were found to have not properly cleaned rooms between guests during the coronavirus pandemic.

Sanitizing measures were not completely performed after rooms were booked, vacated and rebooked under a different guest’s name at the Trump property, which overlooks Central Park, Hyatt Place and Hampton Inn.

The rooms at each property were checked for clean bed sheets, pillow cases and towels, that in some cases went unchanged.

Surfaces and commonly used items, including remote controls and thermostat settings, also were not wiped down in every case. 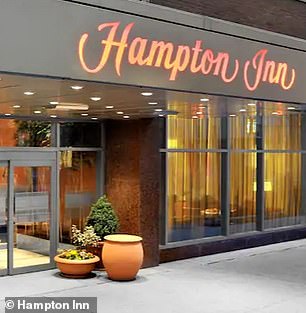 The Hyatt Place Times Square, and Hampton Inn Times Square were  Manhattan hotels found to have not properly cleaned rooms between guests during the coronavirus pandemic 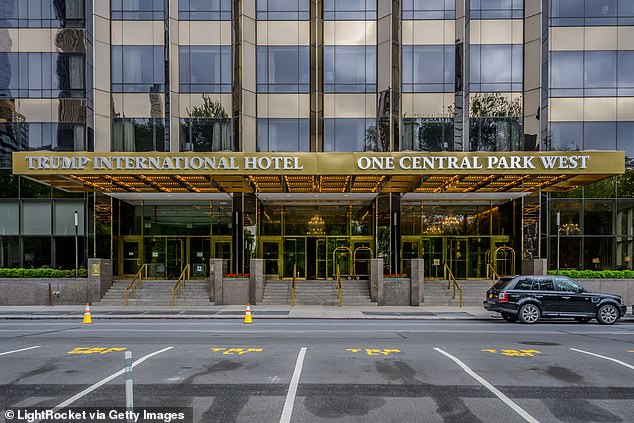 The Trump International Hotel, which faces Central Park, also was among hotels that did not pass a hidden test to see how well they cleaned their rooms during COVID-19

The findings were made in a report on Inside Edition broadcast Monday.

The news outlet had sent a correspondent undercover to determine whether the rooms were properly cleaned between guests during the coronavirus pandemic.

So far, New York State has had more than 392,000 confirmed cases of the coronavirus, which has been blamed for close to 25,000 deaths.

As the nation has moved to reopen after lockdowns were imposed to contain the spread of the pandemic through out the states, hotels have begun to resume full operations after the pandemic cost the industry about $38 billion.

To see how well hotels in New York were sanitizing their rooms in between bookings, Inside Edition correspondent Steven Fabian used a washable, invisible spray paint that can only be seen under UV lighting to spray the Inside Edition logo on to bed sheets and pillow cases used on the bedding of each room.

Similarly, an invisible gel was used to put a handprint on surfaces and applied to commonly touched items, including remote controls and thermostats. 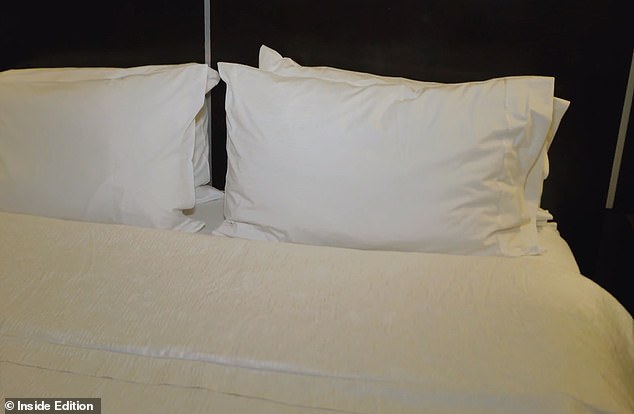 To see how well hotels in New York were sanitizing their rooms in between bookings, Inside Edition correspondent Steven Fabian used a washable, invisible spray paint that can only be seen under UV lighting to spray the Inside Edition logo on to bed sheets and pillow cases 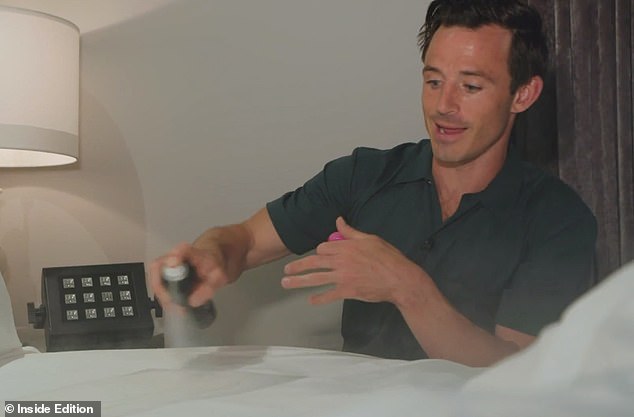 UV lighting later reveals the imprint of the program’s logo

The test of a room at Trump International, which can be booked for about $600 a night and comes with a Personal Protective Equipment welcome kit that includes a mask and cleaning products, revealed the bed sheets and bath towel were changed.

However, the pillow case revealed the program’s logo under UV lighting. The desk and remote control also were not wiped down.

A manager called to the room immediately left upon arriving and finding the show’s camera’s in the room.

A spokesperson for Trump International later sent a statement accusing the program of faking the report.

‘Following an internal review, we have concluded that the claims made by Inside Edition are categorically false,’ the statement claimed. 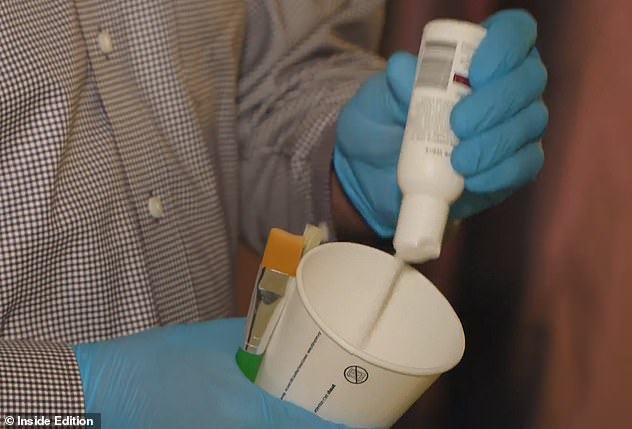 An invisible gel also was used to put a handprint on surfaces and applied to commonly touched items, including remote controls and thermostats 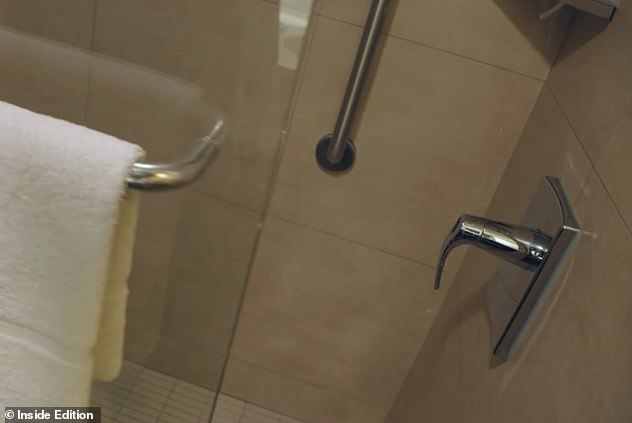 The invisible gel was applied to surfaces that are commonly touched, including shower knobs 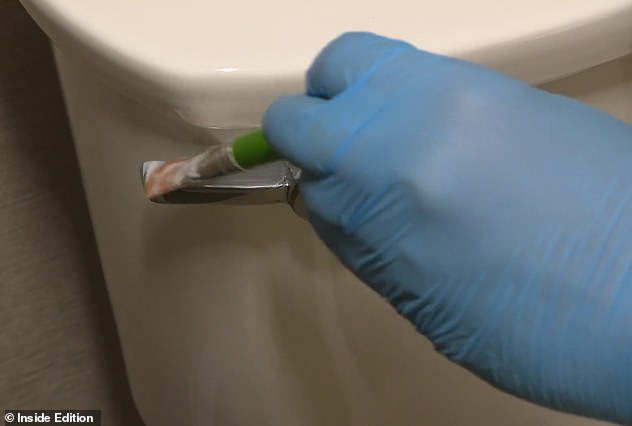 ‘Trump International Hotel and Tower New York is one of the premier luxury hotels anywhere in the world and has received countless accolades, including the Forbes Five-Star award for the past 13 years.’

The test of a room at the Hyatt Place Times Square that goes for as much as $230 a night and includes a view found the logo appeared on the bedding when UV light was shined on the sheets and a pillow case.

The surface of the room’s desk was wiped down and towel replaced, but the remote still revealed the invisible gel under UV lighting. A manager who came up to the room after the failed test said staff ‘would look into it.’

‘But don’t you think during Coronavirus times they should be going the extra mile to keep rooms clean?’ Inside Edition’s Fabian asked the manager.

‘Absolutely, and that’s what we’re doing,’ she replied. 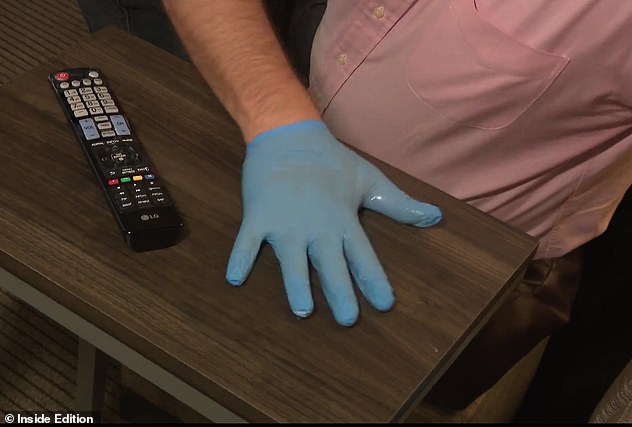 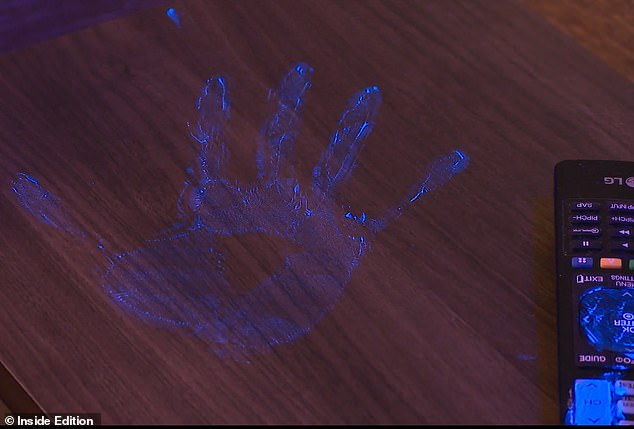 A spokesperson for the hotel chain, which is owned by the family of Illinois Governor J.B. Pritzker, later told the news outlet that the company was ‘deeply concerned about the situation described, as it is not representative of Hyatt’s rigorous and enhanced cleaning protocols that have been deployed globally due to COVID-19.’

‘We are working with the hotel’s owner to ensure the hotel is implementing proper cleaning protocols that are consistent with Hyatt’s commitment to cleanliness for the safety and wellbeing of our guests.’

The second test of the Hampton Inn Times Square room that can be booked for $101 also revealed the bedding went unchanged. A remote control and thermostat also had not been wiped off.

When called to the room, a hotel employee says he must get the manager, but no one returned, Inside Edition reported.

A statement from the company about the independently run hotel said ‘cleanliness is one of our highest priorities, especially during these unprecedented times.’

‘An internal investigation revealed that our housekeeping team relied on a visual inspection of the room’s cleanliness to determine which areas received attention, deviating from our protocols,’ the statement explains.

‘This is a violation of our standards to thoroughly clean each room. Both our housekeeping team and management apologize for this mistake and we are retraining our team members to reinforce our procedures.’