I can’t resist the Siren’s call!

‘Grrrrrrrr!’ goes the hydraulic drill, cutting rudely through the sultry summer air. ‘Boom!’ cry the scaffolding planks, thrown roughly to the ground. ‘Claaangggg!’ shriek the metal poles, hurled in the lorry’s back. The siren’s song this most certainly ain’t, and proof that even The Goring, that most regal of London hotels, cannot escape the ceaseless cacophony of our capital.

Yet at Siren, the hotel’s new seafood restaurant, the beguiling song of those mythical temptresses is very much present, mellifluous above the din. Not so much in the piped muzak, rather in the soft summer breeze that wafts through the room, and the vast picture windows, thrown wide open and gazing out over a small but immaculate garden. And the trees and plants that are scattered across the room, matching the kitsch, over-the-top (but somehow charming) chintz fabric that covers the chairs. 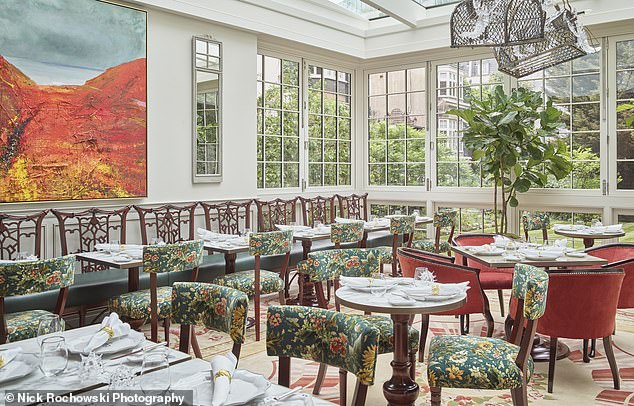 At Siren, The Goring Hotel’s new seafood restaurant, the beguiling song of those mythical temptresses is very much present. Not so much in the piped muzak, rather in the soft summer breeze that wafts through the room, and the vast picture windows, thrown wide open and gazing out over a small but immaculate garden

There’s no getting away from the maritime theme either. This is the new Nathan Outlaw gaff, after all. And Outlaw is a true piscine king, a benevolent and rather brilliant kraken of the kitchen. Glass lobsters crawl up glass chandeliers, while menus are clad in shagreen. There are spiky glass sea urchin things on the marble-topped tables, and napkin holders in the shape of golden seaweed. It’s just the right side of too much, not so much ironic as a sly, jolly grin from Russell Sage Studios. It’s Home Counties deluxe meets the oyster bar. In this most English of hotels.

Waiters wear double-breasted beige linen suits, while the head barman sports a natty velvet jacket. All wear ornate brooches that remind me of classic Hammer. The sort of thing the Duc de Richleau might sport in The Devil Rides Out. While battling with Mocata and Satan himself. But with Nathan and his head chef Andrew ‘Ginger’ Sawyer behind the stoves, there’s nothing debased about the food. Crusty white bread comes from the St John bakery. No shame in that, as few can bake better. And as we slather it with sweetly saline whipped cod’s roe, they bring out the fish, truly sexy fish, John Dory, lemon sole and turbot, glistening, bright-eyed and red of gill. Whisked up that morning from Outlaw’s Cornish day boats – you’ll be hard pushed to find fresher.

Cuttlefish black pudding is gentle, soft and subtle, an actual crumbly blood sausage, the tiny chunks of cephalopod adding discreet chew and the mildest tang of the sea. An apple catsup is sharp and tart, adding much-needed bite, while a small pile of chopped kohlrabi remoulade adds welcome crunch. There’s a Cornish crab risotto that oozes, all’onda, like the waves. It looked just right, but I didn’t steal a bite. ‘Too good to share,’ says Graham. ‘But divine.’ 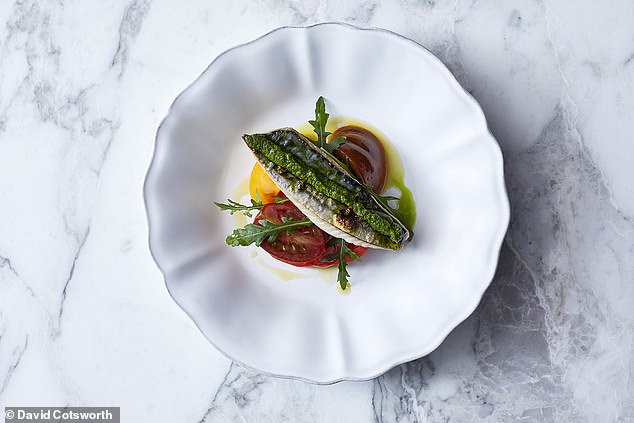 Grilled mackerel. Siren manages to keep the essence of The Goring, traditional in spirit, if rather more modern in terms of menu

There are Doncaster oysters, and baked scallops, and whole grilled lobster with garlic and herbs, but it has to be turbot. So damned fresh I swear I saw it wink. It’s cooked beautifully, as you’d expect. A little under, so the middle is still a touch opaque. But that freshness sings, like the eponymous beasts, through the pert tautness of the flesh, flesh with that elusive ozone whisper. There’s a crab sauce too, so deep and richly flavoured that it has a caramel burr. But not so strident that it dares dim the brilliance of the main event.

Service is as warm as it is well drilled; the whole front of house a suitably classy affair. And Siren manages to keep the essence of The Goring (and yes, you can still gorge on Oeufs Drumkilbo and lobster omelette in the main dining room), traditional in spirit, if rather more modern in terms of menu. While The Dining Room has one foot in the past, Siren is very much a taste of Goring future. Prices are hotel deluxe, but then the very highest level of fish cookery never does come cheap. This, though, is one siren whose call even Odysseus would find difficult to resist.