American expat’s brutal reality check about the cost of living for Aussies who slam the American minimum wage: ‘At least we can still buy a house’

An American expat has taken to TikTok to complain about the cost of living in Australia – claiming he doesn’t know how anyone affords to live Down Under.

Alex Castro, who was excited to move to Australia at first, said the real cost of living dawned on him when he saw rental prices.

Alex Castro, who was excited to move to Australia at first, said the real cost of living dawned on him when he saw rental prices

‘Then I found out no, that’s by week, I don’t know how anyone affords to live here,’ he said.

His first trip to the supermarket continued to blow his mind.

‘So one of the first photos I took in Australia because the price of a 30-pack of Coke was so high, and this was on sale,’ he said.

The photo shows a carton of the popular soft drink with a yellow tag noting it was 33% cheaper than usual at $23.60.

He said a Maccas meal at home is $5, with the same thing costing $13 here.

The American, who is making a culture-shock series on TikTok, said he is sick of Australians taking aim at Americans over their minimum wage.

‘Aussies love to rag on our minimum wage but at $7-per-hour you can afford a $188 mortgage,’ he said.

But it appeared Australians were quick to defend their country against the expat.

‘We can have emergency surgery here without going bankrupt,’ one man said.

‘The cost of living is higher but our minimum wage is also almost 3x higher than USA, and we get more gov benefits, healthcare, and paid time off,’ one woman added.

Others told him to remember the exchange rate – which closes the gap on the price of everyday items.

‘Also when comparing things online remember the tax in the US is added at checkout – ours is included in the advertised price.’

Some said he can’t compare living in a major city to buying in a minor one.

And some said that the cost of food has gone up a lot since their last visit to the states before the pandemic.

‘I just got back from America and groceries were soo much more expensive in the US. Standard fruit, a chocolate bar, chips etc. We were shocked,’ the man said. 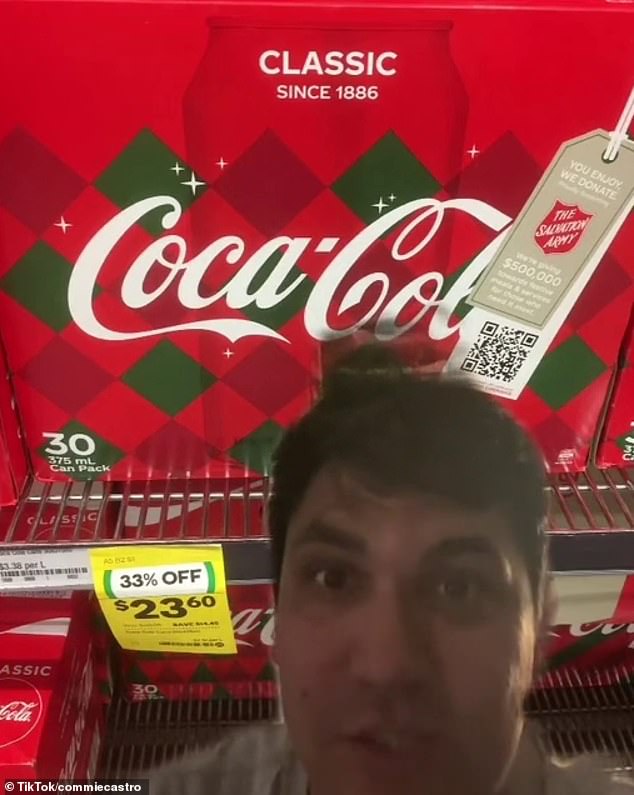 This was one of the first photos the American took in Australia, because he was shocked by the price of Coke

‘There is no way that’s true,’ the TikTokker argued.

But others had the TikTokker’s back.

‘All benefits included out cost of living is still astronomically high compared to the US,’ one woman said.

‘He’s not wrong the cost of living here is ridiculous. I don’t know why more people aren’t outraged?’ added another.

‘American as well. Been here for 20 years. Yeah the prices shocked me too. Especially alcohol.’

Before one woman chimed in that electricity prices would shock him too.

‘That is actually cheaper here than in the US,’ he revealed.