‘I don’t think it will be my last match’: Maurizio Sarri is confident about his Juventus future

‘I don’t think it will be my last match’: Maurizio Sarri is confident about his Juventus future even if they fail to overturn first-leg deficit in Champions League showdown with Lyon

Maurizio Sarri believes his future is safe at Juventus regardless of whether the team overturns a 1-0 deficit to Lyon in the Champions League on Friday.

While Sarri led Juventus to a record-extending ninth successive Serie A title, the Bianconeri have yet to really adapt his quick passing schemes and lost four of 12 matches after the restart.

Sarri knows that despite the dominance domestically, the true test for any Juventus coach comes in the Champions League – a competition that the Bianconeri have not won since 1996.

‘I don’t think it will be my last match,’ Sarri said Thursday when asked if he thought he would be fired if the team is eliminated.

‘I think I’m dealing with top-level managers – they’re not amateurs. They’ve already made their evaluations, independently of the result tomorrow.

‘This question implies that the managers are fans and that they merely follow the emotional wave.’

Sarri has two more seasons on his contract and has said he intends to see it out. 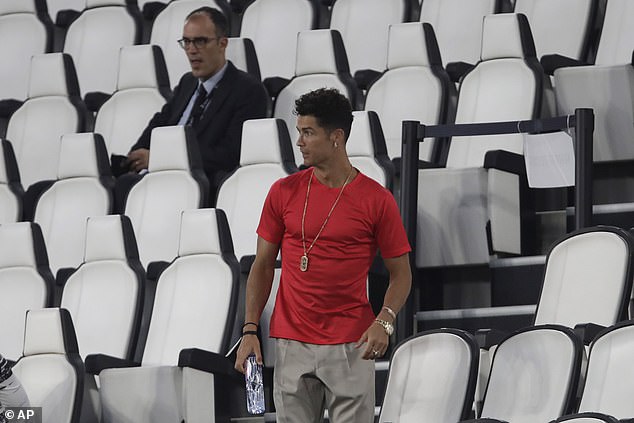 The game at Allianz Stadium will be held without fans due to the coronavirus pandemic. It was postponed from March.

The winner will advance to the quarter-finals in Lisbon.

‘His status is up to the medical staff, although yesterday he did some work on the pitch,’ Sarri said.

‘We’ll try to get him back right up until tomorrow morning. Then we’ll see what his availability his and what the doctors say.’