‘I encountered it three days ago’: The sexist comment that left MKR’s Ash Pollard speechless

Ash Pollard has appeared in numerous TV shows since making her debut on My Kitchen Rules in 2015, including Dancing With The Stars and I’m A Celebrity… Get Me Out Of Here!

And on Friday, the outspoken 32-year-old addressed some of the sexism she has encountered during her three years in the entertainment industry.

Speaking on Studio 10 on Friday, Ash claimed she ‘absolutely’ has first-hand experience of misogyny.

‘I encountered it three days ago’: My Kitchen Rules’ Ash Pollard (pictured) revealed on Friday the vile sexist comment from a man in the TV industry that left her speechless

When host Sarah Harris asked Ash if she had experienced sexism in showbusiness, she replied: ‘Yes absolutely. In fact, I encountered it three days ago.

‘I was walking through the hallway… and I said, “Oh, gosh, I’m absolutely slammed right now”, and one of the guys said “I’d like to”.’

Panellist Joe Hildebrand, 42, then asked her to clarify what the man was suggesting. ‘To slam you?’ he asked, and she nodded in reply. 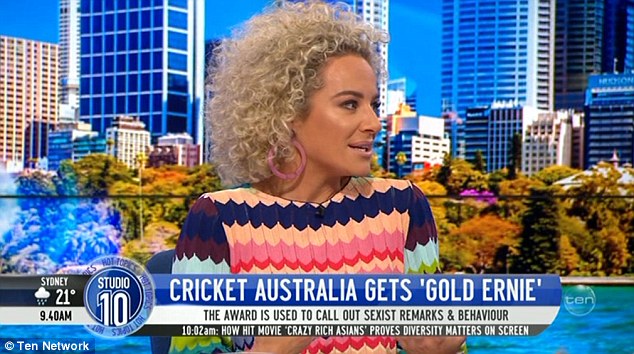 He said what?! Ash recalled on Studio 10: ‘I was walking through the hallway… and I said, “Oh, gosh, I’m absolutely slammed right now”, and one of the guys said “I’d like to”‘

‘Yes, dammit!’ Ash replied, adding: ‘I actually just turned around and was just like, “What? Like, are you all right?”‘

Ash later admitted that she had been guilty of saying inappropriate things herself.

‘I’ve been guilty of saying stupid things as well, we all have,’ she said. ‘And in the moment you kind of think, “Oh, I’m going to be funny.” 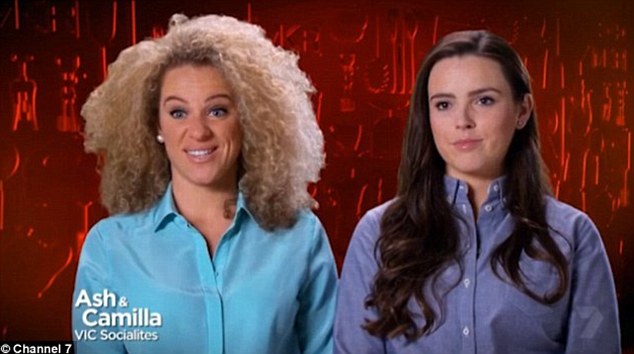 Screen time: Ash (left) has appeared in numerous TV shows since her debut on My Kitchen Rules in 2015. Pictured with her friend Camilla Counsel (right)

‘But then you realise once you’ve said it, it’s like, “I should not have said that”. But you almost don’t know how to come back from it.’

Sarah asked Ash if she thought that the person who made the remark about wanting to ‘slam’ her was trying to be funny, and she agreed.

After appearing on various TV shows, Ash launched her breakfast radio career at 101.3 Sea FM in January this year. 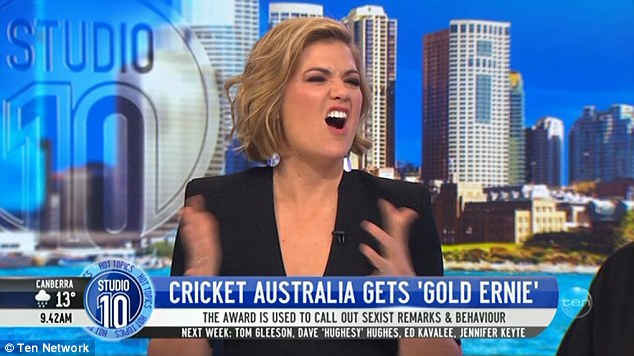 Knowing the line: Studio 10 host Sarah Harris (pictured) asked Ash if she thought the man who made the remark about wanting to ‘slam’ her was just trying to be funny. She agreed, saying: ‘He was, he is a nice person. But it’s not funny, to start with. It’s not funny at all’