I fear Prince Harry has killed off any sliver of hope of building bridges, writes REBECCA ENGLISH

Smug, sloppy, dishonest, appalling. And those were the more printable phrases I heard yesterday to describe the first tranche of Harry and Meghan’s Netflix opus.

Revisionist bull**** is another.

For while it failed to contain many of the ‘truth bombs’ some had predicted (it’s quite clear those are being saved for next week’s instalment), yesterday’s offering is being viewed by those on the inside as an insidious hatchet job from start to finish: on Harry’s family, the institution of the monarchy, the media and the very fabric of this country.

From those snide remarks about how he was the only man in his family to have married for love, as opposed to picking a woman who ‘fitted the mould’, to Meghan’s gleeful re-enactment of the exaggerated curtsy she first gave the Queen on meeting her (much to Harry’s clear discomfort), the couple’s sly trashing of the Royal Family and the kingdom that embraced them through the prism of the prince’s all-encompassing hatred for the media laced every minute of the Sussexes’ three-year revenge project.

Don’t be fooled by recent attempts to distance themselves from the series: the end credit ‘For Archewell Productions’ tells you all you need to know.

What has hurt people most, however, is their out-and-out attack on Harry’s late grandmother and her proudest legacy, the Commonwealth – the family of nations that Harry and Meghan were both more than happy to be associated with as youth ambassadors, until she stripped them of their royal duties.

The documentary sees British writer and broadcaster Afua Hirsch question the Queen’s championing of the organisation she refers to as ‘Empire 2.0’ (seemingly forgetting that such is its reputation, countries without any link to Britain’s colonial legacy have been clamouring to join).

‘To have allowed that particular slander about the Queen’s intentions towards the Commonwealth is appalling,’ a former Palace staffer told me.

‘This was a direct attack on the Queen and an organisation that Harry and Meghan were very happy to be associated with – until they quit their jobs to make money, that is. Can you imagine if Her Majesty had been alive to see that? She would have been devastated.’

The late Queen, I have been told by several sources, was left confused and heartbroken by her grandson’s behaviour over the past four years.

She put a brave face on matters and insisted on keeping a line of communication open with him right up until her death, but make no mistake – she was deeply, deeply hurt.

As is the King, Harry’s father, who has been virtually airbrushed out of the documentary series so far – an expendable spare part sacrificed on the altar of Diana, Princess of Wales’ ‘awesomeness’, in Harry’s words.

Instead, many of the sly digs have been reserved for his brother and sister-in-law: Harry’s suggestion that their marriage was one of convenience (anyone who has seen them together close up will know what a fallacy that is), to Meghan’s intimation that their public reserve (as opposed her own touchy-feeliness) spilled over into private froideur.

Anyone who has come into Harry’s orbit says he is a complex man who has been scarred by his childhood experiences and trauma. 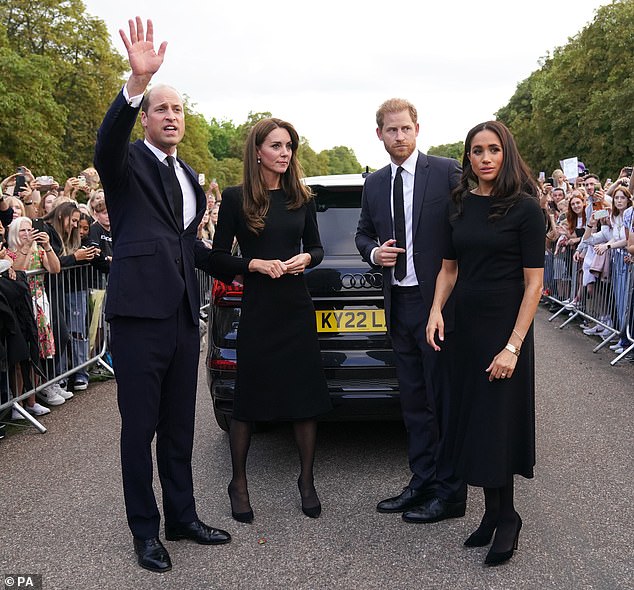 Many of the sly digs have been reserved for Harry’s brother and sister-in-law. Pictured: William, Kate, Harry and Meghan at Windsor Castle following the death of the Queen in September

He clearly adores his wife and their little family and the ‘docu-series’ reminds us once again of how much happiness they have brought him.

So why not just sit back and relish the happiness he has now?

I asked a friend, who knows all the main players in this drama well, why Harry and Meghan had chosen to goad his family yet again. ‘Meghan? That’s easy. She wants fame, fortune and a ‘legacy’. To become an icon on the world stage. Oh, and she ALWAYS wants to have the last word,’ they replied.

Whatever his reasoning, the sum achievement is that Harry has, once and for all, ridden a coach and horses through the remaining sliver of hope that he could one day build bridges with his family.