‘I grew up in the streets’: Celtic midfielder Ismaila Soro discusses his tough upbringing in Abidjan

There must be a French phrase for jumpers for goalposts. It matters little, of course, as Ismaila Soro’s recollections of playing in the streets of Abidjan need no translation: he speaks the international language of the joy of football.

‘Toujours,’ he exclaims, when recounting when and how he played football in the alleyways near his home in the capital of the Ivory Coast. ‘Toujours,’ he repeats, this time with a smile, as he recalls day-long games in temperatures nearly 30 degrees.

The childhood experience is universal in its essence. It resonates from Abronhill to Abidjan. It has become a stereotype. But the journey of the 22-year-old Celtic midfielder has been extraordinary by any measure.

Sitting in a flat in Glasgow, speaking through Zoom, Soro may consider street life in the Ivory Coast just part of his youthful experience. It had, certainly, the element of fun but it also instilled a shard of flint into the sunniest of souls.

‘We played in bare feet,’ he says. ‘Just a vest. No replica strips. Just playing morning, noon and night. All day, every day. We made our own goalposts. It was our life.’

There is no self-pity in this, rather a joyful exuberance. He was singular in his talent but he was not alone in life. There was a full team of Soro siblings. He has five brothers and five sisters.

But only one has made it to Paradise in a route that has seen him play in Moldova, Belarus and Israel. There was a street full of children playing football. Only one has a professional contract.

The journey has thus been demanding but the player seems unaffected. His past, it seems, has equipped him for any challenge. ‘It was hard, truly tough,’ he says. ‘We didn’t have much.’

He had football, however. ‘I grew up in the streets. My big brother always said to me: ‘Come on, let us play football’. So we would go out with all our friends and play. Toujours.’

The games were endless, though Lanzini, his big brother, finally called it a day, bringing a halt to his football career as a boy.

Ismaila played on, moving into the second division of the Ivory Coast league as a 16-year-old. ‘I knew then I could be a player,’ he reveals. 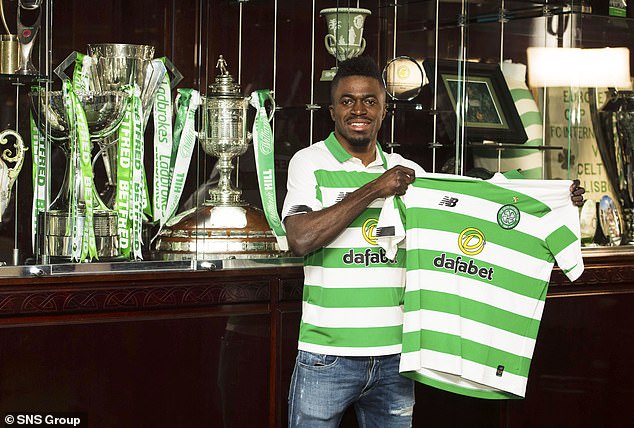 ‘I always had the dream but then I knew it was possible. The dream became an obsession. I worked hard and believed something could come.’

Europe beckoned. He answered the call. The president of the academy side at Moussou in the Ivory Coast had contacts in Moldova. The potential of the young player was obvious but so was his desire to realise it fully.

The street player knew his fate and fortune lay abroad. Initially, it was in the byways of European football.

‘Israel was a step up,’ he agrees. ‘But not too much. The football in Moldova and Belarus was of a good standard. So it was not too difficult to adapt in Israel. It was warmer, though.’

The ascent from the streets to a club with Champions League aspirations seems seamless but Soro’s smile cannot disguise the challenges he has faced.

His late father, Adama, counselled his son against a sporting career, instructing him to study at school. ‘He was strict, but I believed.’ Faith won out over parental advice. ‘I don’t know what I would have done if I had not been a footballer,’ he says.

‘I would have studied, I suppose. But who knows what I would have become? My brothers and sisters are all still in Abidjan. They work or are at school. I suppose I would still be there with them.’ 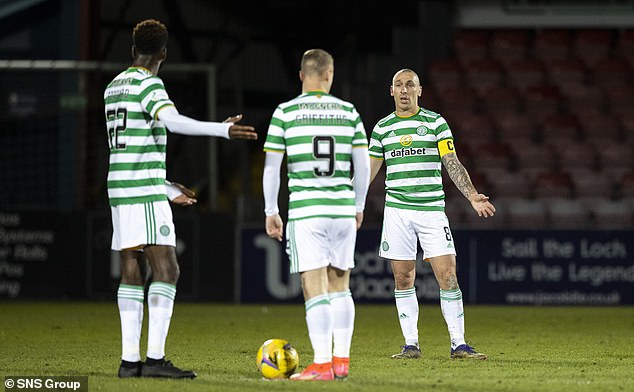 Instead, he is in Glasgow. The dream lives on, surviving the blows of European weather, resisting the rigours of lockdown for a young man far from home and overcoming a sluggish start to his Celtic career.

The French have a word for it. ‘Frisson,’ says Soro, recalling his first impression of Celtic when he arrived to sign in January of last year.

He scored his first goal in December. It was thus a long, tough initiation but Soro has not travelled from the streets of Abidjan to fail in Paradise.

‘My first impression was that frisson, goosebumps. I just wanted to play in this magnificent stadium in front of the fans,’ he adds.

He watched the defeat to Copenhagen in the Europa League from the stands just a month after he arrived. He was disappointed by the result but entranced by the stage on offer to him.

He remained largely on the sidelines until he was called on in the wake of a spell of poor results for the club. He immediately showed excellent form, acting as a reliable and perceptive prompter from midfield.

But how had he found the transition from Israel to Glasgow and the realisation that first-team football seemed initially beyond his grasp?

‘It was tough,’ he admits. ‘It was hard in the beginning,’ He had two months of ‘normal life’ before lockdown. He has few complaints, but pertinent observations. 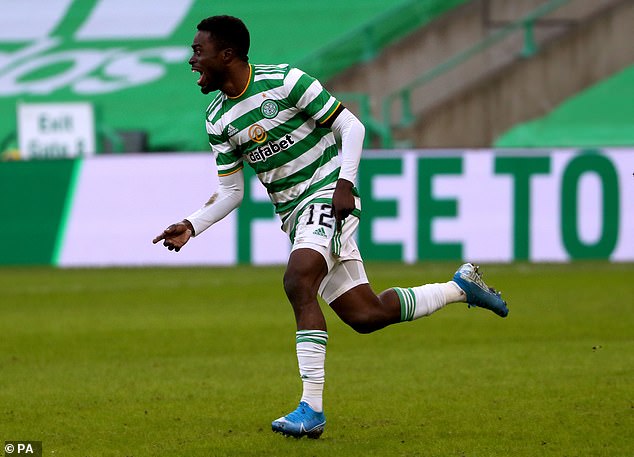 ‘Belarus is colder than here but has in one day sun, rain, snow, then sun again. I find that strange. But the moment I arrived (at Celtic), I felt home.’

He speaks of the ‘strong spirit’ at the club and the support he found in the dressing-room. He does not shy away, though, from confronting the turmoil of his early days when a first-team spot seemed far away.

He took solace in the advice of Vakoun Issouf Bayo, who similarly found it difficult to find a place in Neil Lennon’s side. His countryman is on loan at Toulouse but left Soro with a message of motivation.

‘He told me to work hard, to focus on that,’ says Soro. ‘He said you never know when your chance might come but when it does, you must take it. It can all go off the scale after that.’

That did not happen for Bayo, at least not yet. But Soro has laid down a marker for next season with assured performances before making way for the return of Scott Brown to the team.

‘It was very, very hard,’ he says of the struggle to break into the first team. ‘You go to training, work hard but don’t play at the weekend. That is tough.’

He realises this is the reality of life at a big club. It does not dismay him. ‘My character, my way, is never to let go, I always push myself. I was determined to play in the first team and take my chance.’

He has a strong sense of the unyielding imperatives of first-class football but still allows himself to dream. 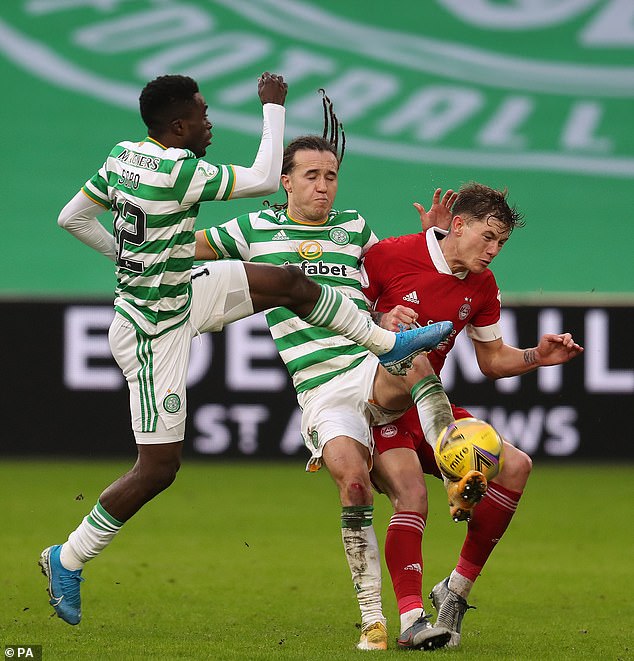 The tough-tackling midfielder has won plaudits for his work rate, energy and passing range

‘Yes, that dream would be to play in Europe under the lights in front of all the fans,’ he explains. His immediate ambition is routine but sincere. ‘I want to be a big part of this club going forward. I want to win trophies and make the fans happy,’ he says.

This is the normal drive for the professional footballer but Soro immediately switches to the less than traditional aspects of his upbringing where academies were only reached after endless hours on the rudimentary training fields of city streets.

‘I still keep close to Abidjan,’ he says. ‘I call home every day. My mum is proud. She just tells me to eat well and put a coat on when I go out. Like every mum, I suppose. I am a Christian and every day I pray. I give thanks to my father every day.’

The family live on the same street where Soro took his first steps towards that journey to Paradise. He has bought a house there, too.

There is a new generation of children playing there. There is one difference from the era of Ismaila Soro honing his trade in the crudest of surroundings.

‘Everybody in that neighbourhood is now a Celtic fan. I take them back strips and other gear. They all watch the games online,’ he says.

It is a brief look back at the homeland, for Soro is a character who looks forward. He has come far. But there are miles to go. He still talks of dreams but he knows they can come true.

It is a lesson he learned on the streets of Abidjan.