There are 12 electrodes strategically placed around my bare torso and a high-tech mask strapped tightly around my face.

I’m sweating and red-faced, pedalling steadily on an NHS exercise bike in a warm clinic, and as the incline is gradually increased, the ride is getting harder. My breathing gets faster and shallower, and my heart pumps harder.

Every molecule of oxygen I absorb and every trace of carbon dioxide I exhale is being tracked and recorded by the machines at my side. There is a blood-pressure cuff taking intermittent measurements on my left arm; and the sensors are mapping an electrocardiogram of my heart activity on the screen.

It’s a fitness test I desperately want to pass. For the results will tell me how likely I am to survive major surgery that could prolong, and even save, my life. In November 2018, I was told I had stage-four bowel cancer, which has spread through the lymph nodes into my liver. For six months, since I started chemotherapy in January, its growth has been slowed.

But now the tumours must be cut out or the cancer cells will begin to multiply again. This involves taking out half of my liver and a section of my bowel. It’s tricky, risky surgery – my liver consultant, Ricky Bhogal, tells me one in 20 patients don’t survive the procedure on the liver alone. Doing both together, as my surgeons are suggesting, is an even bigger risk.

So here, at the Royal Marsden Hospital in London, one of the world’s leading specialist cancer centres, I’m being put through my paces to assess whether I’m a good candidate for the surgery.

Thousands of patients across the country are now thought to be undergoing these assessments before operations – a rigorous process that calculates how risky surgery might be for someone based on their overall fitness and how well they absorb oxygen.

It is important to know how they might cope because the operation and even the general anaesthetic places the body under the same stress as running up a hill.

Studies have shown that those with the lowest scores following the 15-minute bike test – known as cardiopulmonary exercise testing, or CPET – take longer to recover from surgery and are more likely to end up with complications. About 80 per cent of those who pass the Royal Marsden’s tests go forward for surgery. The remaining 20 per cent may need further assessment before being approved.

Some hospitals also offer tailored programmes of home-based strengthening exercises and advice on eating well to patients while they’re on the waiting list – a pre-op bootcamp, minus a yelling fitness instructor.

Dr Ravi Raobaikady, the consultant anaesthetist at the Marsden’s Admissions and Pre-Assessment Unit, says: ‘The CPET helps us understand how well a patient will cope with the stress and how we can help them climb that hill of major surgery.’

There is little robust data to prove that boosting a patient’s fitness pre-surgery can improve their outcome. But that, certainly, is the tantalising hypothesis and it’s why the Marsden has been using a prehab programme for a decade. 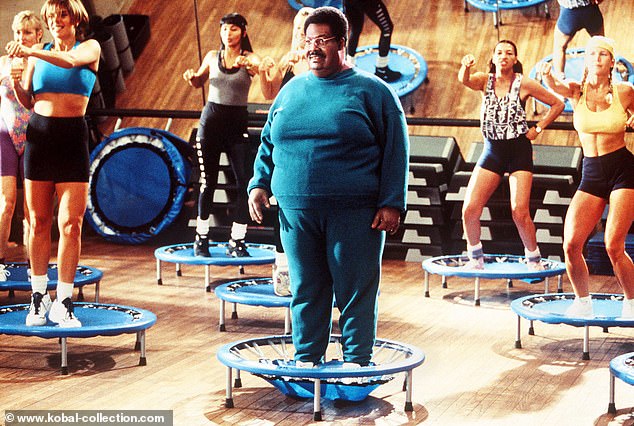 If you’re unfit, like Eddie Murphy in The Nutty Professor, above, surgery may not be approved

Dr Ramanathan Kasivisvanathan, head of anaesthesia and perioperative care, says the service ‘ensures we operate on patients at the right time and get them as well as possible before surgery’.

It involves maintaining the heart rate at about 80 per cent of maximum capacity while using an exercise machine that simulates walking up stairs. Patients are also offered diet and exercise advice by staff.

Data based on 59 patients with oesophageal and stomach cancer suggests complication rates after surgery reduced from 80 per cent to 29 per cent.

It also found the average patient who had been through prehab stayed in hospital for eight days compared to 12 days for those who did not.

Gastrointestinal surgeon Krishna Moorthy, co-lead of Imperial’s programme, said: ‘Surgery puts demands on the heart and the lungs and the trauma leads to inflammation, which causes toxins to be released into the muscles, making them weaker.

‘The fitter you are, the easier it will be to withstand this process. We followed a group of our patients through the whole process and the data showed, after recovering from surgery, they were fantastically stronger and fitter and more active than before they were diagnosed with cancer.’

Whether that will happen in my case remains to be seen. I’m relatively fit anyway. For my prehab assessment, and under the careful supervision of exercise physiologist David Bruce, a specialist CPET technician, I perform an exercise involving blowing into a tube which measures the volume of air exhaled in one second, and uncovers any restrictive lung disorder such as asthma. Then I move on to the bike test. I passed, and was duly approved for the double surgery, which I underwent earlier this month.

I was in hospital for about ten days but up and walking about after a week. It’s been tough. After something like this, your body puts everything into healing so you feel vulnerable and weak.

I can see why you need to be in good shape to cope. So any plan to help make sure patients are can only be a good thing.