‘I know guys on the front line… a few are dead’: Emotions running high ahead of all-Ukrainian tie

‘I know guys on the front line… a few are dead’: Lesia Tsurenko admits emotions are running high ahead of all-Ukrainian tie with Anhelina Kalinina at Wimbledon

On Wednesday, in the shadow of Wimbledon’s showpiece attractions, Lesia Tsurenko and Anhelina Kalinina will face off for the first time.

The compatriots have not decided how, even if, they will mark the occasion. They might sport a blue and yellow ribbon — should rules allow.

All that is certain: no second-round clash will carry as much symbolism as this all-Ukrainian tussle.

‘We just want to remind (people) that Ukraine is in trouble and we need help,’ said Tsurenko, who beat Britain’s Jodie Burrage on Monday.

She is normally based in Kyiv; Russian targets sit 100 metres from her home. Tsurenko’s sister escaped to her new Italian base but their mother remains in Ukraine’s south. ‘She is promising me to come to Italy one day, but I don’t believe her.’

The toughest part? ‘A lot of people I know are on the front line. One guy has been taken by Russians.’ They know he is alive but little else. ‘Two more guys are fighting… a few people are dead.’

No wonder the 33-year-old has other priorities. ‘Emotionally, winning or losing doesn’t exist any more.’

Kalinina, the 29th seed, has not been home since February but she has felt the fires of war, too. Her parents’ home did not escape the bombs that scorched Irpin. ‘There are no apartments any more,’ she revealed. ‘They are living on bags and praying every day.’ 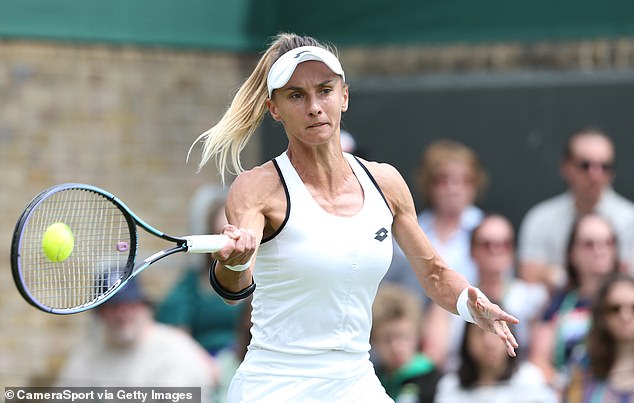 Her grandparents are now stuck in occupied territory. ‘They can’t leave. Next door are Russian soldiers.’ For Kalinina, results have consequences. ‘You go further, you earn more money,’ she explained. ‘I’m not a superstar so I’m helping with what I can.’ Family and those she barely knows. ‘It’s a lot to them, and for me that’s huge motivation.’

Both looked close to tears while speaking on Monday. Both will carry that baggage on to court on Wednesday.

After her comeback victory over Hungary’s Anna Bondar, Kalinina admitted it has been ‘impossibly difficult to concentrate’ on tennis.

Tsurenko has been seeing a psychologist. On the day a crowded shopping centre was hit by a Russian missile strike – killing 13 people – she, too, conceded: ‘This tension will only be released when the war will finish.’ 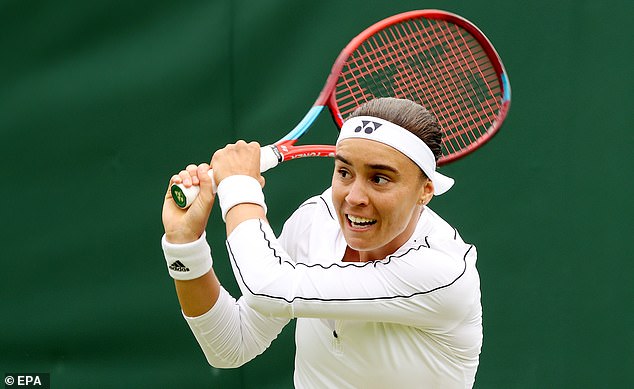 These Championships will at least allow Tsurenko to escape one source of stress — Wimbledon’s decision to ban Russian and Belarusian players means she experiences ‘definitely less tension’ in the locker room.

‘I feel good being at the tournament without having to see players from those countries again,’ said the world No 101. ‘In most of the cases it’s nothing personal. I just heard from one Belarusian player that she’s supporting us, me, and Ukraine, and she’s against the war.

‘I haven’t heard from anyone else… not saying anything to me makes me feel bad.’

Kalinina has little sympathy for those bemoaning the ban. She added: ‘We cannot compare what they are missing and how many millions of people are killed, still dying, and how many refugees… are out of money, out of family, out of their jobs. They don’t have anything.’