‘I needed to take that time away’: From Big Bash to Aussie smash for Ashleigh Barty

‘I needed to take that time away’: From Big Bash to Aussie smash for Ashleigh Barty as former cricketer reaches Australian Open quarter-finals

Less than three years after playing a season of professional cricket, Ashleigh Barty has transformed herself into a national Australian tennis heroine.

The 22-year-old, part Aboriginal Queenslander is the first female from the home nation into the Australian Open quarter-finals for 10 years, and riding a wave of goodwill.

She now faces world No 6 Petra Kvitova after an engrossing fourth round in which she fought off the relentless, deafening challenge of Maria Sharapova to win 4-6 6-1 6-4 before an adoring Rod Laver Arena.

It is a far cry from the Australian summer of 2015-16 when, disillusioned with tennis after a highly promising junior career, Barty took time out to pursue cricket.

Despite having done little more than play with bat and ball in her backyard, she made the Brisbane Heat team in the women’s Big Bash.

She looks back on it as a transformative period, having opted to return to tennis when that season was finished, and acknowledged that it was just what the doctor ordered.

‘Absolutely. I needed to take that time away,’ she said. ‘I feel like I came back a better person on and off the court, a better tennis player. For me, having that 18 months off was vital.

‘Sitting down with my team late last year, it was one of the goals we set out that we wanted to go deep into the Slams, and I feel like that was the next step for me. It’s amazing that it’s happened in Australia. 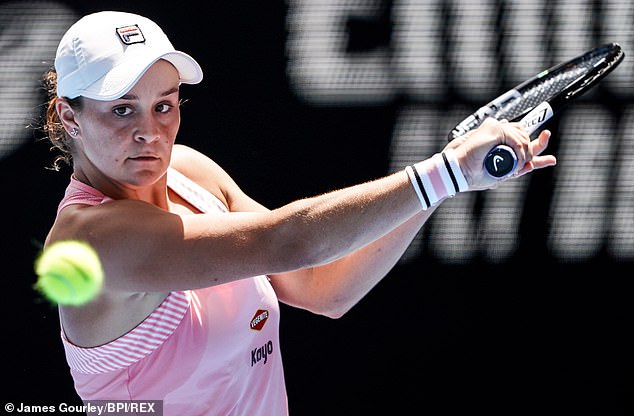 Sharapova turned herself into even more of a pantomime villain by taking a ridiculously long seven-minute toilet break after Barty had turned the match around by winning the second set.

She almost came back from 0-4 down in the decider, but Barty just about held her nerve. Another severe test now awaits, with Kvitova showing her pedigree by taking down highly promising American teenager Amanda Anisomova for the loss of only three games.

This tournament had looked to be the possible moment when Sharapova might finally make some impression after her return from a Meldonium ban in April 2017, a comeback that has yielded surprisingly little.

She has only reached one Grand Slam quarter-final in that time, and is still anchored around No 30 in the world as she approaches her 32nd birthday.

Repetitive shoulder problems and a tendency to serve double faults have been a hindrance, although she was beginning to look dangerous here.

‘I have spoken about my shoulder openly in the last few weeks, months, years,’ she said.’ 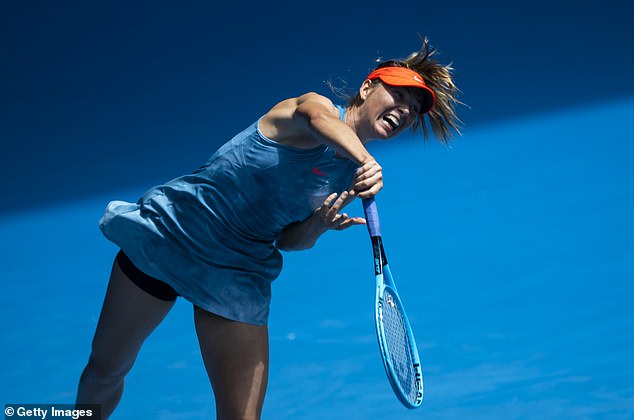 ‘It’s definitely been an issue for the majority of last year and going into this year, as well. But it’s something that, as I said after my first match, it’s a pain-management type of thing. I’m still working through it.’

She was much more comfortable discussing that than more controversial areas, such as the ludicrously long toilet break that saw her booed back onto the court by the home crowd.

‘I think that’s a silly question to ask,’ she responded when asked about the reaction.

She refused flatly to answer if her inability to take Meldonium now that it is outlawed was hurting her bid to get through a fortnight at the Major tournaments, but it is increasingly difficult to conclude otherwise.

Sharapova is not the only big name absentee from the bottom half of the women’s draw.

In a startling result Wimbledon champion Angelique Kerber was hammered 6-0 6-2 in just 56 minutes by America’s Danielle Collins, the 25 year-old world No 35 who is a graduate from the University of Virginia and holder of a degree in media studies.