‘I thought everything was over for me at 78, then this happened’

As the winner of a BBC talent show for senior musicians, Bette Wernick shows Kerry Potter why you just can’t beat a golden oldie

Let’s start with the blindingly obvious, the first impressions, the shallow stuff: Bette Wernick looks sensational. Even more so when you discover the woman in the skintight PVC trousers is a 78-year-old pensioner from Barnsley.

‘I’m surprised the photos turned out so well. I’m amazed, honestly,’ says Bette the day after her shoot, in her down-to-earth Yorkshire brogue. She isn’t a model – rather a singer, and the standout star of Rock Till We Drop, a recent four-part BBC talent contest series featuring older musicians.

If the very notion of yet another TV talent show fills you with dread, I urge you to give this one a chance. Usually my least favourite genre, I adored this series. Spandau Ballet bassist Martin Kemp (still handsome) and rapper Lady Leshurr (a sweetheart) were charged with putting together bands consisting solely of musicians aged 64 plus. The two rival groups then competed for a coveted slot performing on the main stage at last summer’s Isle of Wight music festival.

It’s wholesome, joyful viewing and the contenders are a delight. There’s Roy, a 95-year-old drummer who first picked up his sticks at 16. Another drummer, Arty, 73, doesn’t let being wheelchair-bound (due to a childhood bout of polio) hold him back, while Martin, a 67-year-old postman who lives in a static caravan, swaggers like Jagger around the rehearsal room. If you missed it in March – it slipped by largely unnoticed on BBC2 on Tuesday evenings – it’s still available on iPlayer.

Bette, a miner’s daughter who grew up in poverty before becoming a BBC house singer, is talent-spotted by Lady Leshurr. Spoiler alert (although the competition element of the show isn’t that important): her band wins and we see Bette belting out her bluesy vocals while prowling the stage in spike-heeled Jimmy Choo ankle boots, in front of tens of thousands of largely millennial and gen Z festivalgoers last year. 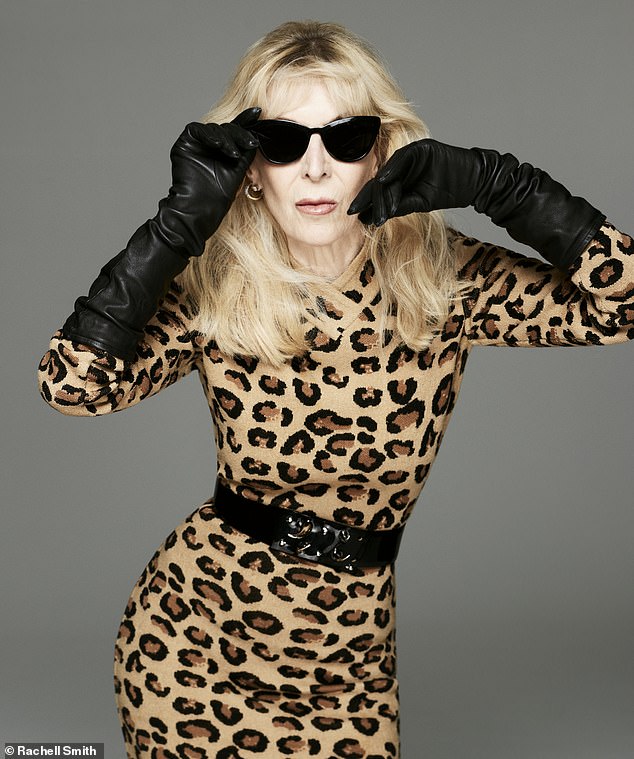 ‘The lesson here is never give up on your dreams,’ she says. ‘I thought everything was over for me at 78, and then this happened and I was performing at the Isle of Wight festival. I remember watching Jimi Hendrix on TV playing there all those years ago [in 1970]. He was a god to me – and there I was on the same stage!’

The show conveys the loneliness and isolation suffered by many older people, a problem worsened by Covid lockdowns. It was filmed last year as the country was emerging from the most severe restrictions. ‘That was a difficult time, but I got through it by listening to music and working out new songs,’ says Bette, who has lived alone since her husband Pete died from cancer in 2012.

‘When lockdown was over, I thought, “What am I going to do now?” I didn’t know what to do with my life. I was getting a little… not depressed, but worried about the whole thing, as was the case for lots of people who lived alone. Then the show happened and it gave me something to focus on.’

Her stepson, who lives in Australia, saw a Facebook ad placed by the show’s production company, sent a video of Bette singing in the front room of her cottage in the village of Cawthorne, and that was that. 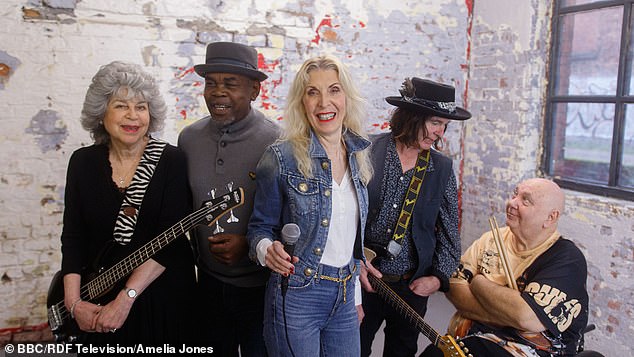 Bette knew she could sing from a young age – her dad would come home from the pub with his pals in tow, get five-year-old Bette out of bed and have her stand on the kitchen table to serenade the lads. She bought records from the age of 12, obsessed by Billie Holiday and Elvis Presley (‘We all loved him, wanted to marry him’). Her other big love was fashion: ‘I began buying Vogue in my teens. I think it cost two shillings and sixpence. My mum used to buy The Lady magazine and send for second-hand clothes that were advertised in it. There I was in Barnsley, probably wearing a debutante’s hand-me-downs and thrilled to bits.’

‘I’ve always lusted after designer clothes but my Northern upbringing made me hunt for a bargain. In my wardrobe I have beautiful pieces found in second-hand shops, like an Azzedine Alaïa dress [which she is wearing, above]. I’ve had it for at least 30 years.’

At 21, she moved to London with £5 in her pocket, a bed booked at a YWCA hostel and a dream of becoming a professional singer. ‘When I arrived, I’d never even had a boyfriend – I’d led a very sheltered life. When I look back, I don’t know how I had the nerve to do it.’ But she did it in style, arriving in the city at the height of the 60s. ‘It was a fabulous time!’ she says. ‘There were four of us girls sharing a room and we’d head to the King’s Road on a Saturday and go to Mary Quant – I had the haircut, and I wore geometric tights and ridiculously short skirts. The clothes, the whole way of life – it was wonderful.’

She landed an admin job at the weekly music paper Melody Maker. A colleague heard Bette singing as she wheeled the tea trolley around the office and put her forward for an audition. She was soon part of a soul band called The Rag Dolls, with whom she toured the UK before the whole band were offered parts in the musical Hair. ‘Because of my voice, I was asked to play Sheila, one of the lead roles. But I turned it down. I felt I couldn’t act and I was shy. I thought it would be too much of an ordeal.’ Instead she picked up session work on the periphery of the 60s music scene and worked in cabaret clubs, a perfectly respectable career – but not enough for Bette. She wanted more. 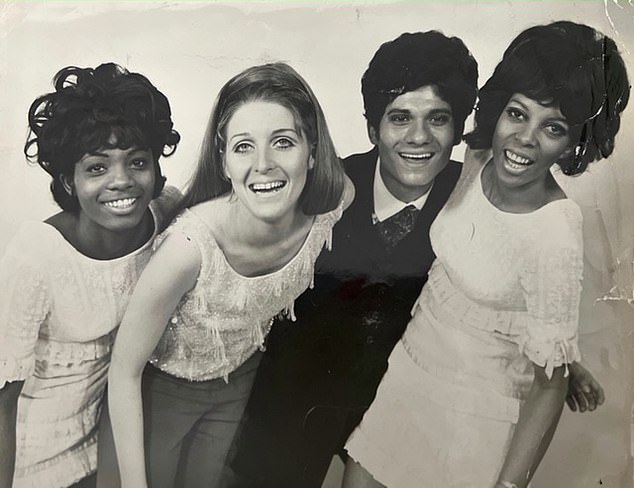 Her first singing job was with soul group The Rag Dolls

This path did, however, lead her to the love of her life, Pete, who worked in the gambling industry and already had a son from a previous relationship. They met when she was booked to do a season at a cabaret club in Blackpool in the early 70s.

‘I turned up on my first night. It was pouring with rain and I thought, “What am I doing here? I’m 30 years old, I’m getting nowhere.” So I ordered a large scotch at the bar to steady my nerves. A voice then said to me, “I’ll get that for you.” Without looking, I replied, “No, thank you!” But then I turned round and thought, “Oh! He’s quite nice.”’ They had more drinks together after Bette’s set, propping up the bar, talking and laughing until 4am.

The couple, who didn’t have children together, were inseparable until his death a decade ago: ‘When he died, I thought, “What the hell would I do next?” I was so used to being with him all the time. There was a huge chasm in my life.’

Ten years on, would she consider another relationship? She shakes her head: ‘I’m very, very fussy. I haven’t been out with anyone since. The longer you live alone, the more you get used to it. I wouldn’t say I was looking for a man.’ But doesn’t ‘it’s never too late’ apply to your love life, too? I ask. ‘I don’t know. It would have to be someone very special. He’d have to have a great sense of humour because my husband made me laugh from the first moment I met him.’

She is not short of male attention, having recently joined Instagram to publicise her singing. ‘My stepson said I should do it. I’m quite a private person and all of a sudden you’re connecting with people you don’t know. Some bloke the other day sent me a message saying I looked and sounded fantastic. I replied with a thank you and then he immediately tried to do a video call with me! I nearly died! (Those not trying to woo Bette are welcome to follow her @bettewernick.)

The 70s and 80s were her professional purple patch. She was employed by the BBC, working in its famous Maida Vale studios, performing with radio orchestras and travelling the world to work on song contests. When the BBC stopped employing house singers in the late 80s, Bette and Pete moved to Australia for three years while he launched a business there, and she gradually found herself singing less.

I was offered a lead role in the musical Hair, but turned it down. I felt I couldn’t act and was shy

It wasn’t until after his death, when Bette was mired in grief and desperate for distraction, that she decided to try getting back into singing. It was dispiriting. ‘It should have been easy to continue – I was a professional, I still had a great voice, I had a CD of songs, I’d learned how to use an iPad for backing tracks. But it was impossible to get work. One female agent was so awful, she destroyed my confidence. I emailed a BBC conductor I used to work with, told him that Pete had died and I wanted to work again and he ignored me. I was 68 at the time and I can only put it down to ageism.’

By the time Rock Till You Drop cropped up, she was singing for charity fundraisers at her local village club, so you can see why her success on the TV show proved so transformational. The band have remained firm friends since filming and are about to record some tracks, which, if successful, will lead to a full album.

As for her striking, age-defying looks, Bette attributes this partly to good posture. ‘I learned this from my dad, who never lost his posture.’ She eats a Mediterranean-style diet (no red meat, lots of fish, the odd glass of red wine), never snacks, always wears sunscreen on her face and neck and borrows friends’ dogs to take them on hearty walks. A fear of dementia informs her healthy lifestyle – she’s seen it ravage the life of her mother, who died from it at just 69, and two of her closest childhood friends, both exactly the same age as Bette, who were put into care homes. ‘I wake up in the morning and thank god I’m here and I’m healthy and everything is going well,’ she says. ‘I’m completely fired up and I want to make the most of the time I have left. This is the start of the next phase of my life.’