‘I thought I was going to die every night’: Oprah opens about her experience with menopause

Oprah, 68, has opened up about the terrifying symptoms she experienced during menopause, revealing she suffered from such severe heart palpitations that she ‘thought she was going to die’.

The TV host recently detailed her struggles with menopause – a process that is signaled by the end of a women’s menstrual cycle and can include mild to serve symptoms – in the hopes of destigmatizing the natural aging process.

She sat down with longtime friend Maria Shriver on an episode of Paramount Plus’ The Checkup With Dr. David Agus, the media mogul explained that – while she didn’t experience hot flashes like many women, she did go through horrific heart palpitations that left her fearing for her life.

Winfrey explained that her symptoms worsened, with the TV mogul admitting that she was often left up at night frantically questioning whether she was going to make it through until the next day.

‘I have journals filled with: “I don’t know if I’ll make it until the morning,”‘ she shared. ‘I thought I was going to die every night.’

The 68-year-old media mogul appeared on an episode of The Checkup With Dr. David Agus and explained she suffered from a lack of knowledge alongside Maria Shriver 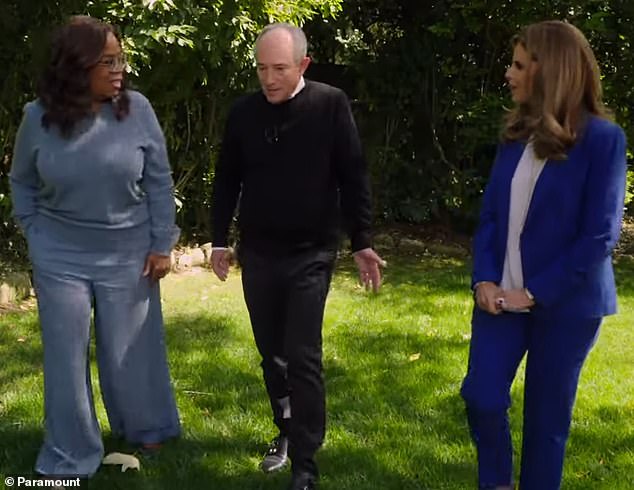 Winfrey added that she dealt with severe symptoms including heart palpitations, the inability to focus and restlessness

The symptoms that left Oprah feeling like she was ‘going to die’: What is menopause and what does it entail?

While experiencing menopause, the host added that she began to feel restless and wasn’t able to focus enough to read – which prompted her to put an end to ‘Oprah’s Book Club’.

Perhaps one of her most extreme symptoms was heart palpitations, she revealed.

‘I was perimenopausal, like in my late 40s, and having heart palpitations.

Winfrey explained she went to five different doctors, desperately trying to find treatment and a cause for the heart palpitations.

She described a time she went to a female heart doctor who put her on heart medication and gave her an angiogram, which is a scan that shows the blood flow through arteries, veins, or the heart.

‘Nobody ever once suggested that it could be menopause,’ Winfrey said.

Part of the reason Winfrey said she found herself in pain was because she suffered from a lack of knowledge on the issue and had never had someone in her life to discuss it with – adding that her mother was a ‘very shutdown person’.

‘I couldn’t get my mother to talk about it. I was just trying to find out what are the possibilities of me having hot flashes or something,’ the author said before noting that her mother didn’t even remember her body going into menopause.

‘My mother was a very, you know, shutdown person [and] I think she did not have symptoms that she recognized. 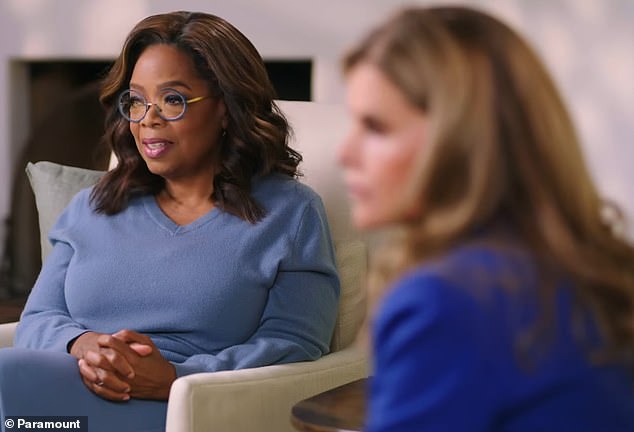 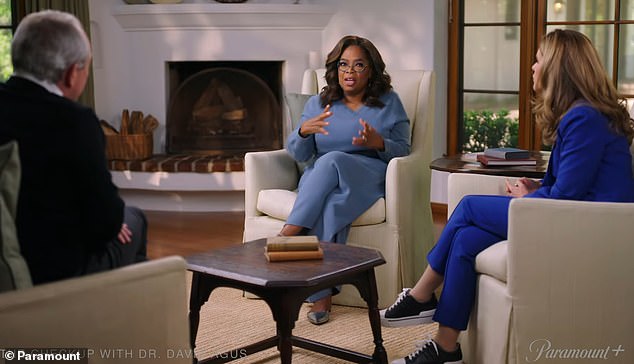 Winfrey explained that her symptoms worsened, prompting her to search for more for information 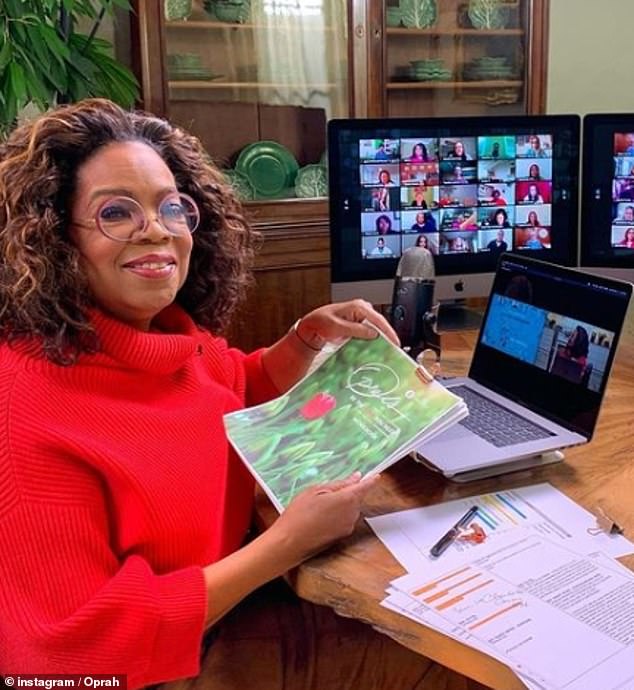 While experiencing menopause, the host added that she began to feel restless and wasn’t able to focus enough to read – which prompted her to put an end to ‘Oprah’s Book Club’

Shriver echoed Winfrey’s concerns regarding the lack of information and stigma surrounding menopause, noting that the pair is ‘adamant’ about bring attention to it because many women often don’t recognize the various symptoms.

‘I think women think that, “Oh menopause means the end of my period,” but they don’t connect the dots of heart palpitations, anxiety, depression, listlessness, lack of concentration.

Throughout their discussion, both Winfrey and Shriver explained that society has misrepresented the aging of women and has failed to provide a substantial amount of knowledge.

‘The whole culture is set up to tell you that the thing that is most natural. We’re surrounded by these beautiful trees here,’ she said as she pointed to the interview setting. 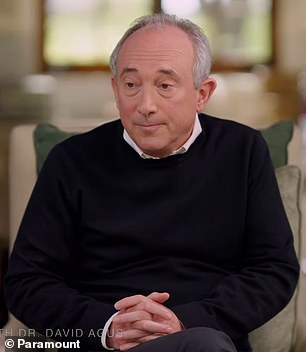 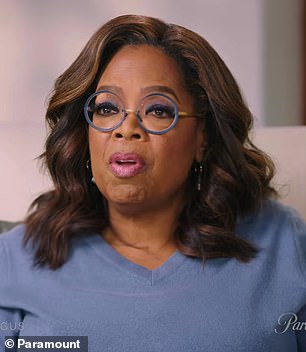 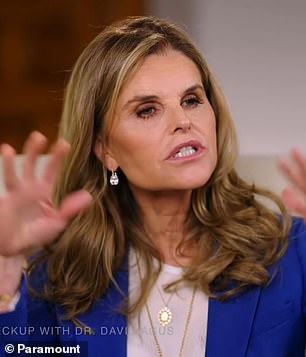 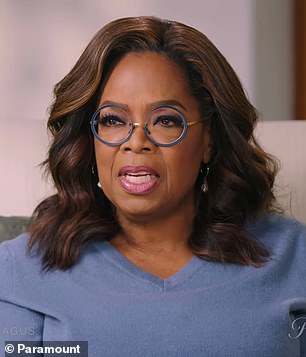 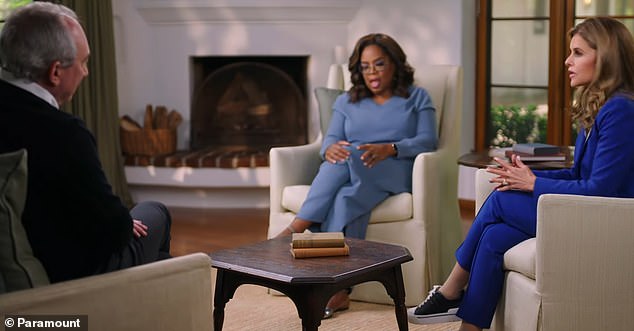 ‘There’s that whole thing out there in the zeitgeist (that) women who are in menopause are crazy, and then women are crazy in general.

‘The stigma will go away if women feel empowered and feel like there’s not something wrong with them if they talk about these issues they’re going through.’

‘Especially for Black women,’ Winfrey added. ‘We have been known for bearing a lot and being the strong ones and keep moving no matter what.’

The cancer specialist and CBS News medical contributor – hosts the show and discusses difficult health problems the stars have faced as well as how these struggles impacted their family members.

‘These artists were willing to take us deep into their own health stories, often for the first time in such a revealing way.

‘Their stories are captivating and scary, though ultimately uplifting and inspiring,’ Agus said.

The Checkup With Dr. David Agus with guest Oprah will premiere on Paramount Plus.