‘I will protect you if your governor FAILS.’ vows Trump

‘I will protect you if your governor FAILS.’ Donald Trump ramps up attempt to blame states for coronavirus deaths – but reveals it will be MAY before thousands of new ventilators arrive in big numbers

President Trump continued to characterize the federal government as a backstop for the states in dealing with the coronavirus pandemic in comments he made at Tuesday’s taskforce briefing.

‘I will protect you if your governor fails,’ he told the American people. ‘If you have a governor that’s failing we’re going to protect you,’ he added.

For weeks the president has told the governors of the 50 states that they should be trying to acquire their own supplies to combat the virus – including ventilators, which Trump said Tuesday would be heading to the national stockpile in big numbers, but wouldn’t hit more than 10,000 until May.

President Trump said Tuesday, ‘I will protect you if your governor fails,’ as he said the federal government was slowly adding tens of thousands of ventilators to its stockpile 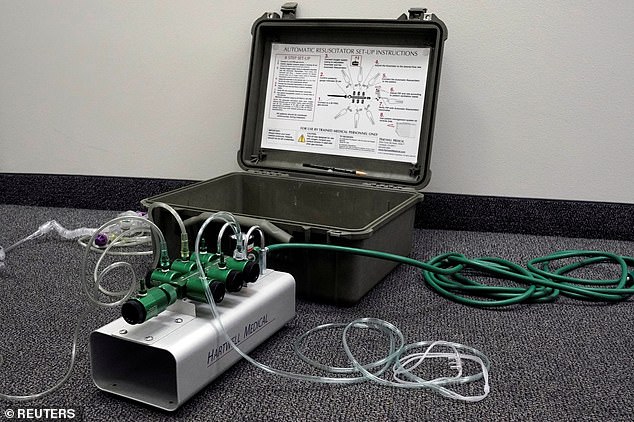 This particular ventilator can serve seven patients at one time. Trump gave the most recent ventilator update at the coronavirus taskforce briefing on Tuesday

‘These are the ones that we’re building for the most part,’ Trump explained, naming Ford, General Motors and General Electric as the companies taking part.

Overall, 110,000 ventilators would be available ‘over a short period of time,’ the president said.

‘I don’t think we’ll need them. Hopefully we won’t need them,’ Trump said.

He told reporters that he hoped that there would be access ventilators to send to other countries including the United Kingdom, which requested 200 ventilators from the Americans earlier Tuesday.

British Prime Minister Boris Johnson is currently in intensive care due to COVID-19, the disease brought on by the coronavirus.

‘We’ll have them for the future and we’ll also be able to help other countries who are desparate for ventilators,’ Trump assured reporters Tuesday.

So far, New York City’s been the epicenter of the virus in the United States.

On Tuesday, the president played nice with the governors, for the most part.

‘I want to remind governors and emergency managers that sharing real time data with us about equipment and their needs is very imporant,’ Trump said at the top of the briefing.

He added that the White House team was getting along ‘very well’ with the governors, before warning that if any of them failed the fedral government would swoop in.

‘But the governors are working well with us over the last period of time,’ Trump said.

But when Trump was asked who would be blamed if people got sick in Wisconsin for voting in-person during Tuesday’s primary election, the president pointed a finger at that state’s leader – Gov. Tony Evers, a Democrat, who had wanted the in-person voting cancelled.

‘You have a Democrat in Wisconsin as governor. Ask him. That’s his problem,’ Trump said.

‘Again, some governors fail. And I won’t let them fail because when they fail I’ll help, but that’s run by Democrats right now,’ Trump added.