Border police have been blinded with lasers and strobe lights as they struggle to shore up Europe’s eastern frontier defences against the flow of migrants unleashed by Belarus.

Polish authorities say soldiers loyal to Alexander Lukashenko, the despotic ruler of the former Soviet republic, have been arming refugees with tear gas as he steps up his so-called ‘hybrid war’ on Europe.

The latest escalation of this crisis started on Friday night as Belarus troops ripped down posts next to barbed-wire barriers that the Polish government has installed along 120 miles of the 250-mile border between the two nations.

They released video footage showing border guards targeted by strong lasers and bright strobe lighting. A spokesman for the Polish Border Force said about 100 migrants were armed with tear gas, which was used against their guards.

Pictured: A grab from a video showing a green laser is shone through a barbed wire fence 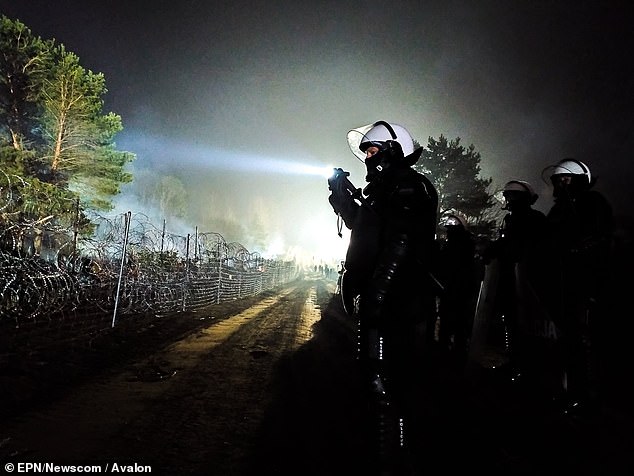 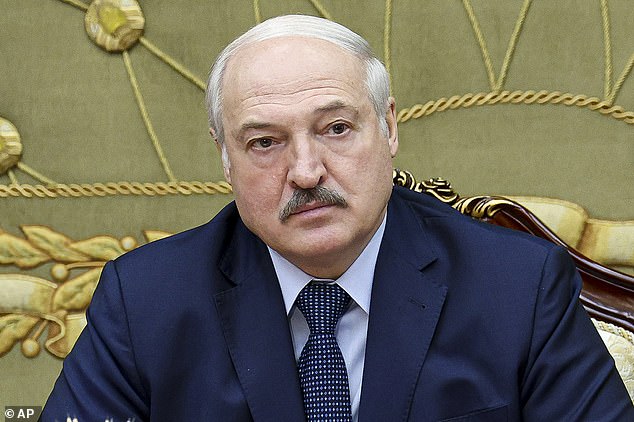 Videos have also shown Belarusian officials with wire-cutters and handing out tools to refugees to destroy fencing as they encourage the mass migration into the EU in revenge for Brussels’ support of the Minsk dictatorship’s critics.

The latest illegal incursion came as nations bordering Belarus, alarmed by the dramatically increased tensions and Russian military manoeuvres in the region, discuss whether to deploy a rarely invoked Nato treaty article that would lead to a unified response from all 30 signatories.

Consideration of such a move demonstrates how worried neighbouring states are by Belarus’s belligerence.

Donald Tusk, the Polish former EU president, has called for Nato to invoke Article Four, while Lithuania’s National Defence Council met to agree on the criteria for seeking a unified Nato response to the border threat.

Lukashenko, who has ruled his country for 30 years and is Europe’s last dictator, has lured thousands of migrants to his country with visas and specially arranged flights.

They are then sent onwards to the EU in revenge for sanctions imposed after his crackdown on protests last year, following a fraudulent election and the illegal diverting of a Ryanair passenger flight to seize a prominent dissident in May.

The EU condemned the act of air piracy, barred Belarusian carriers from its skies and slashed imports of several key export commodities, including petroleum products and potash for fertiliser use. 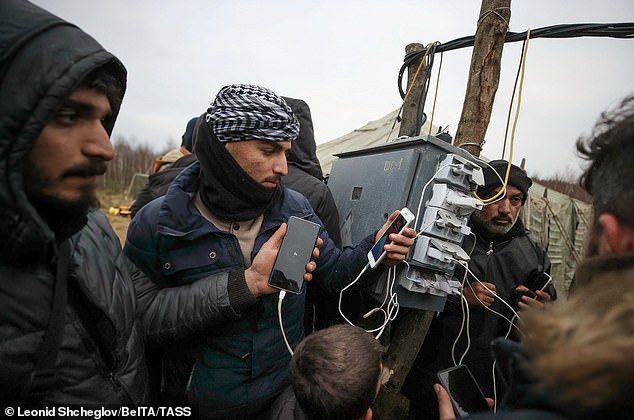 Moscow denies orchestrating the Belarus policy. Yesterday, Putin said: ‘We have nothing to do with it.’ He blamed the West for the crisis, saying its policies in the Middle East were the reason migrants wanted to flee and go to Europe.

But Lukashenko told a defence magazine yesterday he wanted to deploy Russian Iskander missile systems – which have a range of 300 miles and can carry conventional or nuclear warheads.

Meanwhile, hundreds of migrants, reported to be mainly Kurds, are sheltering in freezing conditions in a militarised no-man’s zone on the border between Belarus and both Poland and Lithuania, which refuse to let them into their countries. Belarus says that there are 2,000 people in a rapidly growing camp on the Polish border, including pregnant women and children. Poland says there is double this number, with more arriving every day.

Warsaw said there were 219 attempts to illegally cross the Polish-Belarusian border on Friday. Last month, they logged 16,800 such efforts – four times more each day than for the whole of last year.

Yesterday, Poland confirmed that the body of a young Syrian was found near the border, the 11th confirmed death since the crisis flared up in the summer.

There are fears the number of fatalities will rise as the winter weather deteriorates.

Over recent weeks, I met such human pawns, hiding from Polish border forces in Europe’s last primeval forest. They are desperate. 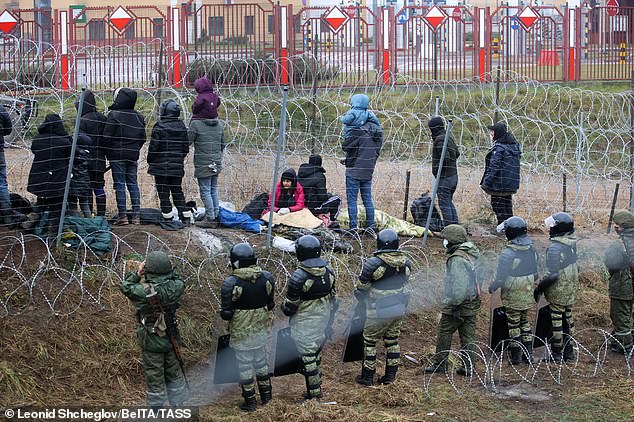 ‘There is no future in Syria,’ said one middle-aged man. ‘We have lost track of who is fighting who in our country. There are no jobs, no schools for our children, no hospitals for our families… no hope or future.’

Most want to go to Germany – yet many have little idea they will most likely be bounced back and forth across the border or stuck for weeks in woods in freezing temperatures.

Lukashenko’s diplomatic isolation has entrenched him in the embrace of Russia, with Putin having long sought to tighten his control over Belarus and other former Soviet states.

A Western diplomat in Minsk said they believed Moscow would invade Belarus if the Lukashenko regime was seen at risk.

General Sir Nick Carter, chief of Britain’s defence staff, told Times Radio there was a greater risk of tensions in the new era of a ‘multipolar world’, and said authoritarian rivals were willing to use any tool at their disposal, such as migrants, gas prices, proxy forces or cyber attacks. ‘The character of warfare has changed,’ he said.

Earlier last week, the US warned European leaders that Russia may be about to invade Ukraine after satellite images showed tens of thousands of troops on the border.

President Joe Biden also expressed alarm on the migrant crisis. ‘We communicated our concern to Russia, we communicated our concern to Belarus,’ he said. Both Ukraine and Poland have sent thousands of extra troops to reinforce borders. The Baltic states issued a joint statement from their defence ministers last week warning that the migrant crisis could ‘spill over into the military domain’. The following day, a squad of 250 Russian paratroopers carried out ‘snap’ exercises with Belarus forces just three miles from the Lithuanian border.

Since the start of this month, Grupa Granica, a migrants support group, has received calls for help from 1,000 refugees stuck in the forests, including 100 children.

Among those who have succeeded in crossing into Poland is Malak, 26, an Iraqi due to give birth in three weeks. She made the journey with her husband and three young daughters in the hope of giving them a better life in Germany.

Their first six attempts to enter Poland were thwarted by Polish border guards, despite Belarusian officials helping to cut fencing.

Malak said they left Iraq as there was ‘no future there’, adding: ‘I would advise all those thinking of coming to do it.’

This is not the message that Europe wants to hear.