At-risk patients, discovered via a saliva test, may be able to avoid dementia if they take a low-dose of the painkiller from middle age for the rest of their lives, they add.

Ibuprofen is thought to dampen inflammation in the brain, which leads to the death of nerve cells and is associated with Alzheimer’s.

Lead author Dr Patrick McGeer, from the University of British Columbia, said: ‘Individuals can prevent that from happening through a simple solution that requires no prescription or visit to a doctor.

‘This is a true breakthrough since it points in a direction where Alzheimer’s can eventually be eliminated. If it is applied worldwide, Alzheimer’s would disappear. Our discovery is a game changer.’

Although the ideal ibuprofen dose is unclear, the researchers believe between one and two pills a day would likely be effective, with Dr McGeer adding: ‘$30 [£21] a year can save your life.’

Alzheimer’s affects around 5.5 million people in the US, with a new case being diagnosed every 66 seconds. Approximately 850,000 suffer in the UK.

Aerobic exercise such as walking and running may halt dementia by preventing the brain from shrinking, research suggested in November 2017.

The scientists, from the universities of Western Sydney and Manchester, analysed 14 studies with a total of 737 participants.

The participants were aged between 24 and 76, with an average age of 66.

They were made up of healthy individuals, Alzheimer’s patients and people with mental health problems, such as depression and schizophrenia.

Scans of the participants’ brains were investigated before and after completing exercise, such as walking or treadmill running.

The exercise programmes lasted between three months and two years, with participants completing two to five sessions a week.

‘Our discovery is a game changer’

Since 2016, the researchers have been following 500 people at-risk of Alzheimer’s.

Their susceptibility was determined via a saliva test, developed by the same scientists, that measures the concentration of a specific protein, known as Abeta42.

Dr McGeer said: ‘Unfortunately, most clinical trials to date have focused on patients whose cognitive deficits are already mild to severe, and when the therapeutic opportunities in this late stage of the disease are minimal.

‘Consequently, every therapeutic trial has failed to arrest the disease’s progression.’

Previous research suggests Abeta42 deposits in the brain cause inflammation, which destroys nerve cells and is associated with dementia.

Levels of Abeta42, which is secreted in the mouth, that are two-to-three times higher than average is strongly correlated with Alzheimer’s later onset.

Dr McGeer added: ‘We have a simple test that can indicate if a person is fated to develop Alzheimer’s disease long before it begins to develop.’

Alzheimer’s symptoms typically affect people over 65, however, its clinical onset may occur in the brain up to a decade earlier.

The scientists therefore recommend people undergo the saliva test at around 55 and then take ibuprofen if necessary.

Dr McGeer said: ‘If they exhibit elevated Abeta42 levels then, that is the time to begin taking daily ibuprofen to ward off the disease.’

Speaking of his hope to have the test available globally, Dr McGeer added: ‘I hope it would be picked up and applied worldwide.

‘They can find out for themselves if they will develop Alzheimer’s and treat themselves.

‘Nobody is more motivated than the person themselves.’

The researchers hope to be clearer on the ideal ibuprofen dose to prevent dementia by next year.

The findings were published in the Journal of Alzheimer’s disease. 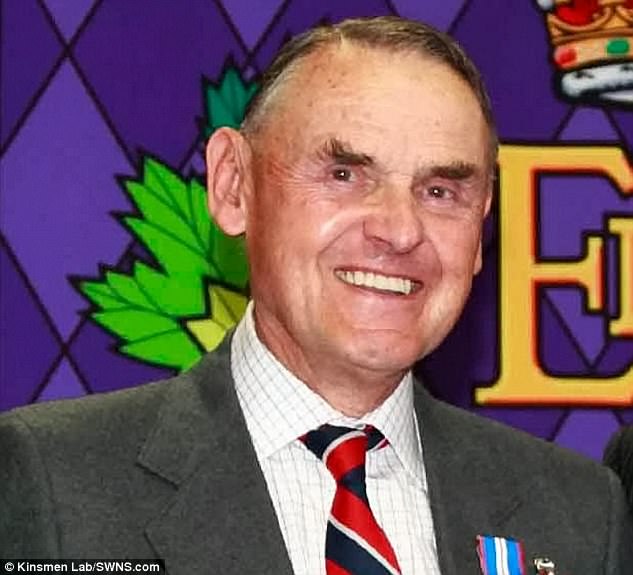 Lead author Dr Patrick McGeer, from the University of British Columbia, said: ‘Individuals can prevent that from happening through a simple solution that requires no prescription’

Pauses in speech and taking longer to talk may be early signs of mental decline, research suggested in July 2017.

People with a family history of Alzheimer’s disease who are at-risk of developing the condition are less able to express their ideas and have reduced ‘fluency’ when speaking, a study found.

They also use words such as ‘it’ or ‘they’ rather than specific names for things and speak in shorter sentences, the research adds.

Julie Liss, a speech expert at Arizona State University, who was not involved in the study, said: ‘Those are all indicators of struggling with that computational load that the brain has to conduct’.

The researchers, from the University of Wisconsin-Madison, conducted a picture-description test on 400 healthy people.

Such tests involve participants viewing a picture and answering a multiple-choice question about it.

The researchers carried out the same test on 264 people in their 50s and 60s, most of which had a parent with Alzheimer’s disease and were considered at-risk of the condition.

Professor Tara Spires-Jones, deputy director of the Centre for Discovery Brain Sciences at the University of Edinburgh, said: ‘The use of anti-inflammatory drugs like ibuprofen has been linked to reduced risk of developing Alzheimer’s in past studies of large populations.

‘However, these types of studies do not prove that anti-inflammatory drugs themselves actually decrease risk of disease, as other factors not related to the drugs could have the effect.

‘A good illustration of this is the fact that in children, shoe size correlates very strongly with reading ability.

‘However, it is not the size of the kids’ feet that causes their enhanced reading, rather the longer time they have spent learning to read, which coincidentally is also more time for their feet to grow.

‘Going back to anti-inflammatory drugs and dementia risk, it is still not clear whether this correlation with decreased dementia risk means the drugs cause the decreased risk.

‘Clinical trials using anti-inflammatory drugs in people who already have Alzheimer’s have failed, but it remains possible that using this type of drug many years before the disease starts could be preventative – but more work is needed to be sure.’

Alzheimer’s will be as manageable as HIV within 10 years

This comes after an award-winning scientist predicted last month that Alzheimer’s will be as manageable as HIV within 10 years.

Professor Goedert believes drugs under investigation for Alzheimer’s often fail due to them being taken too late into the disease’s progression.

His colleague Professor Bart De Strooper, from University College London, with whom he shares the four-million euro Brain Prize money, added: ‘The mistakes we have made is the trials is that treatment has been given too late.

‘It’s like popping a statin to stop a heart attack.

‘But when we first started we knew almost nothing about Alzhiemer’s and now we understand a huge amount.

‘In 10 years we will have a completely different picture.’