Ibuprofen pill claims to cut side-effects and be faster

Since its launch in 1969, ibuprofen has become one of the UK’s biggest-selling drugs, helping millions find fast and effective pain relief.

But the popular painkiller — which costs as little as 2p a pill — has been dogged by safety concerns about damage caused to the stomach lining over time.

It’s been more than a decade since studies showed arthritis patients who regularly took high doses of 2,400mg a day were three times more likely to suffer potentially fatal gastric bleeding than those not on the medication.

Ibuprofen is one of the UK’s biggest-selling drugs and helps people find pain relief, however studies have long showed that high doses of the painkiller can cause fatal gastric bleeding

Ibuprofen can damage the protective barrier of mucus that lines the stomach and reduce blood flow to the lining, making it harder for ulcers or perforations to heal.

But now, British company infirst Healthcare has come up with a solution that could allow people in chronic pain the same amount of relief from ibuprofen with half the dose — and no risk of gastric bleeding.

The secret is mixing ibuprofen with a fatty substance called a lipid, which occurs naturally in the body. The pharmaceutical industry already uses lipids to make medicines more soluble — improving their absorption and providing faster relief. But to do this, the lipids have to be structurally altered in the laboratory.

Ibuprofen is already well-absorbed in the stomach — that’s what causes gastric issues — so the lipid in the new pill has not been structurally altered.

It therefore does not dissolve easily in water, which allows it to pass through the stomach without being absorbed and travel lower in to the intestines, where it is more effectively taken up, according to the developer.

Explaining how the new pill is made, Dr John Brew, a pharmacologist at infirst Healthcare, says: ‘We heat the lipid and dissolve the ibuprofen into it, then allow it to cool and thicken. That then goes into a capsule made from gelatin. The capsule melts in the stomach at body temperature [37c] and the active drug comes out. 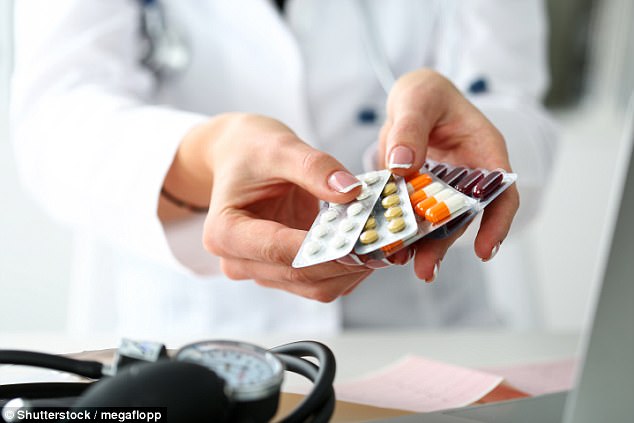 ‘The drug is designed to melt into a liquid but, crucially, it does not mix with water in the stomach.’

Instead, Dr Brew says, the drug floats on the surface of the liquid in the stomach, much like a blob of fat in a washing-up bowl.

This is thought to be the key to why the new formulation is potentially much safer and more effective than standard ibuprofen.

Normally when we swallow ibuprofen it gets into the bloodstream by being absorbed through the lining of the stomach.

However, the lipid layer around the active drug means this does not happen and instead, the mixture passes through the stomach to the first part of the intestine, called the duodenum.

This is where the majority of digestion takes place. Partially digested food is mixed with bile and digestive juices which contain enzymes that further break down foods. This bile also breaks down the fat-based ibuprofen, allowing it to be absorbed through the walls of the duodenum.

‘Therefore, the new ibuprofen is safer because it never comes into contact with the stomach lining,’ says Dr Brew.

The theory is that ibuprofen is also more effective when absorbed through the duodenum rather than the stomach, as this part of the intestine connects directly with the lymphatic system, which transports fluids in and out of the bloodstream.

The lymphatic system is packed with immune system cells called macrophages, which are despatched to a site of injury or inflammation. As ibuprofen seeps through the duodenum, it gets taken up by macrophages.

By contrast, when ibuprofen is absorbed into the bloodstream through the stomach, it circulates round the body until it eventually reaches the affected joint.

In a study by the company and researchers at the University of Leeds and Erasmus Medical Centre in Rotterdam, 462 patients with knee osteoarthritis were divided into three groups and given 1,200mg ibuprofen (two tablets three times a day) either in the lipid-based pill or standard capsules; or 2,400mg standard ibuprofen.

Results after a few months found that those who took the lipid-based ibuprofen obtained as much relief as those on the double-dose regimen, according to the journal Osteoarthritis And Cartilage.

The new ibuprofen — Flarin — goes on sale in LloydsPharmacy from today at a cost of £7.95 for 30 capsules, and will be available in other pharmacies from March.

Rob Moots, professor of rheumatology at the University of Liverpool, said the research on Flarin was ‘robust’ and the drug could help many patients reduce their intake of ibuprofen.

‘But only when the drug is much more widely used will we find out if it really delivers on its promise,’ he adds.