Ice addict, 34, who helped create a government meth rehab program is sentenced to jail for beating a stranger with a golf club after relapsing

An ice addict who helped create a government meth rehabilitation program four years ago has been jailed for beating a stranger with a golf club after relapsing.

Jamie Coyne was sentenced to three-and-a-half years behind bars after pleading guilty to doing an act or omission causing bodily harm at the Albany District Court, in Western Australia, this week.

The 34-year-old helped set up the Ice Breakers methamphetamine rehabilitation program in 2015, which is backed by the state government, before later relapsing, Perth Now reported.

He used ice in the 24-hours before the unprovoked assault in November 2018.

Coyne approached the 47-year-old victim, who he did not know, while the man was chipping golf balls at the front of his Spencer Park unit, the court was told.

He arrived at the scene on his motorbike and CCTV footage shows him shove the victim to the ground before punching and kicking him.

Conye then grabbed a golf club and repeatedly hit his victim, leaving a seven-centimetre gash on the man’s head.

Prosecutor Paul Lyons told the court Coyne intended to seriously harm the victim when he arrived at the units with ‘violence in his mind’.

The court also heard that Coyne used a hose to spray the victim with water to wash away the blood before leaving the scene.

Mr Lyons said the victim could have died if he had received more blows to the head.

The prosecutor did however note Coyne’s positive work in establishing the rehabilitation program.

Lawyer Bruno Illari said his client was apologetic and was willing to do his time for another chance. 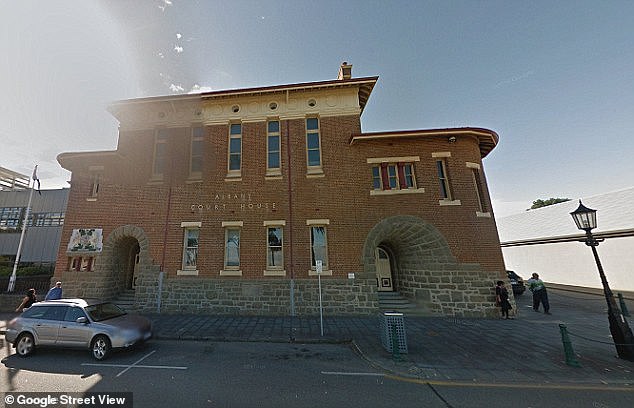 ‘He has expressed his desire to serve his time and try and rehabilitate himself the way he showed back in 2017 when he applied himself,’ Mr Illari said.

The court was told Coyne apologised to his victim in a letter.

She said the differences between the man in CCTV footage during the assault and the positive man described in references was ‘quite stark’.

Judge Gillan noted the offender had a difficult past and struggled to beat his drug addiction but did not diminish the seriousness of the assault.

‘He had fallen off that path by the time of this offending,’ Judge Gillan said in sentencing.

‘I accept when you are not using methamphetamine you are a caring and contributing member of society.’

Coyne will be eligible for parole in 21-months after his jail term was backdated to November.