The icy blast said to be bringing ‘the coldest air in five years’ to the US is already being felt as freezing temperatures wreaked havoc on boats in Upstate New York, hinting at the kind of issues that 200million Americans could face as a ‘polar vortex’ blows through.

Rising water levels and ice jams on the Hudson River resulted in six boats breaking free from their moorings near Troy, New York, and floating down the river towards Albany on Friday.

The Captain JP III cruise ship that broke away from its winter moorings in Troy, New York, and floated down river. It stopped after getting wedged against a bridge in Albany on Friday 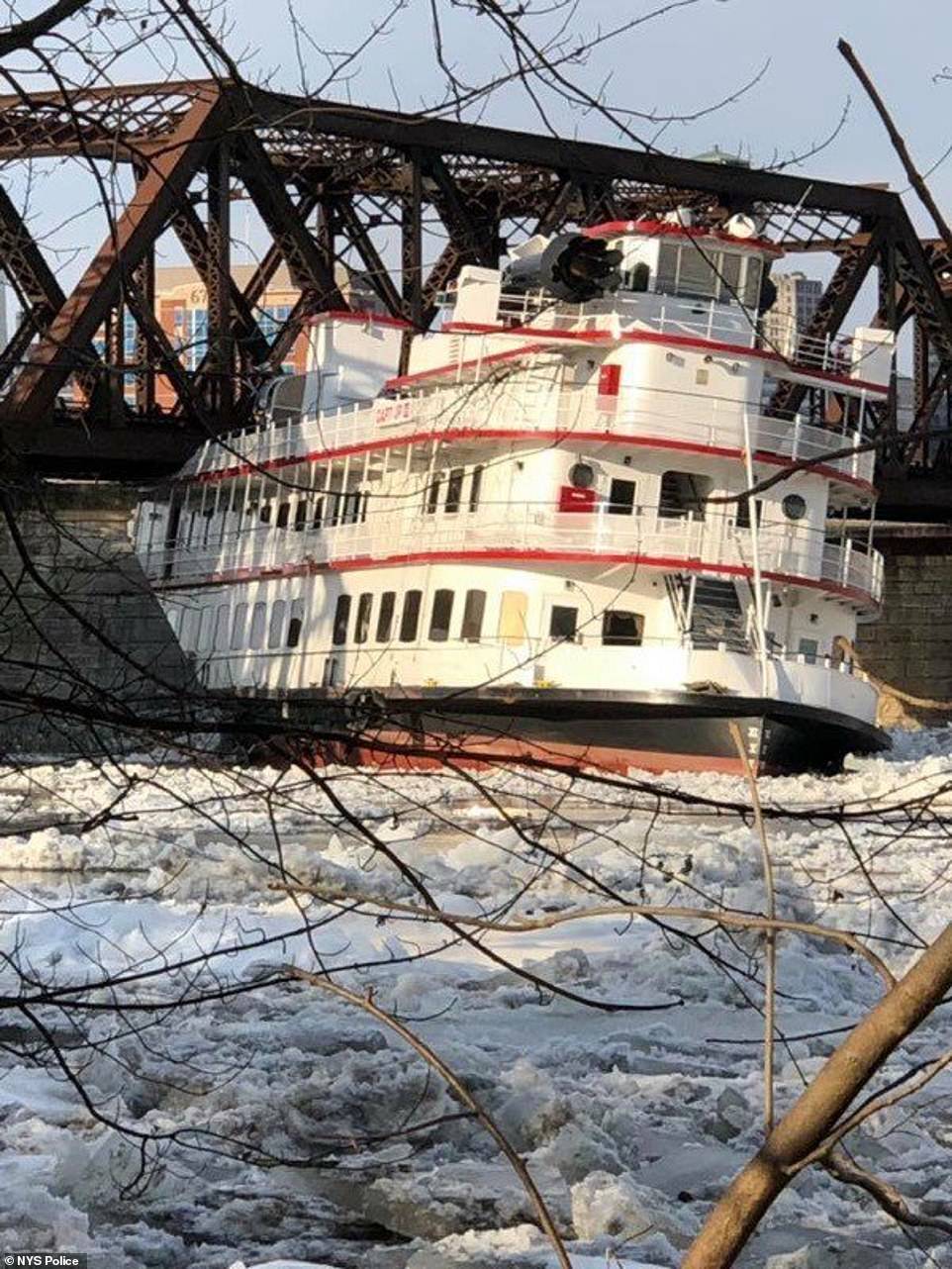 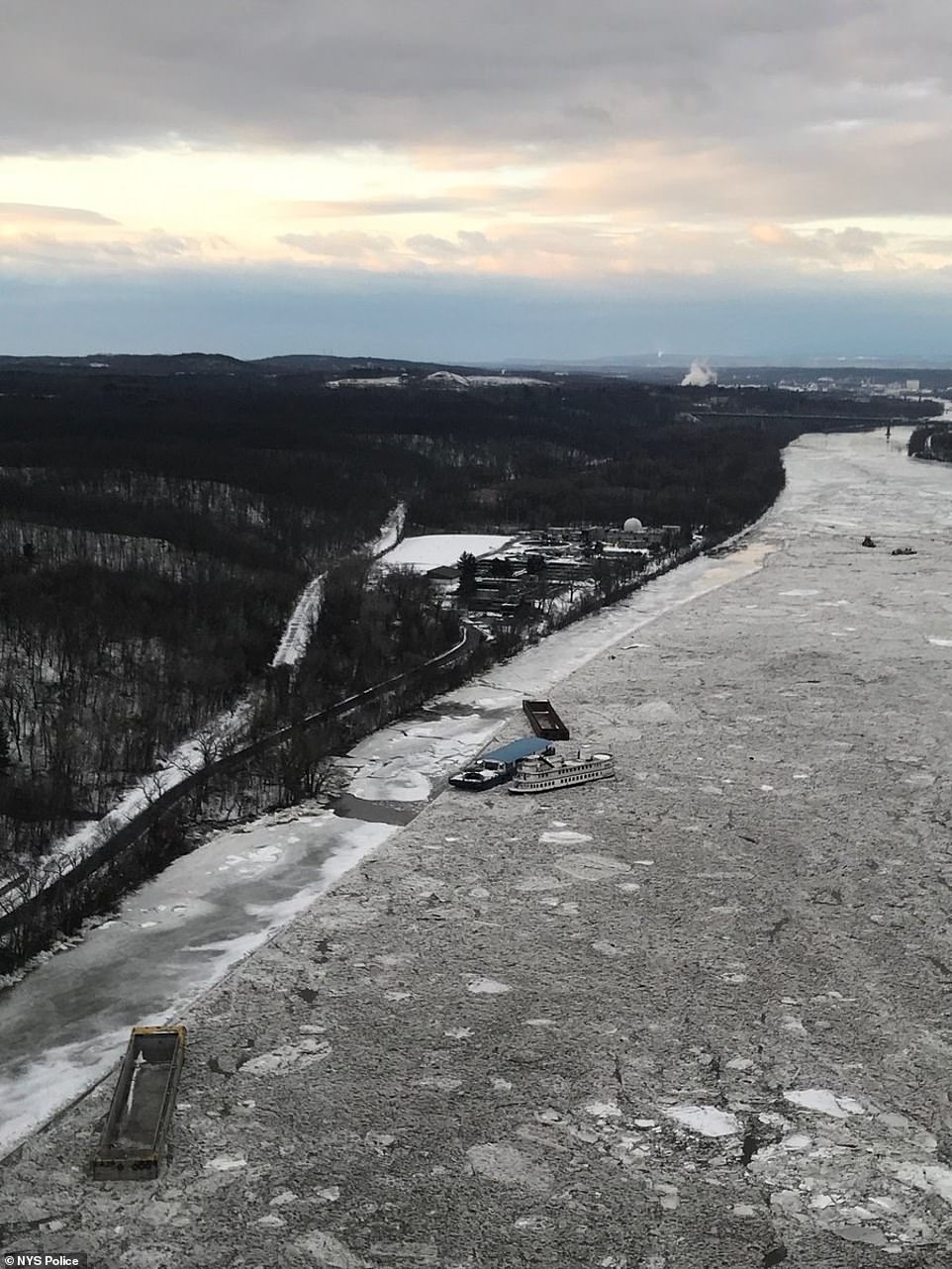 The breakaway boats led to temporary closures of the Rensselaer, New York’s Dunn Memorial Bridge, Albany’s Patroon Island Bridge and Troy’s Menands Bridge, among others, during Friday morning’s commute. All the bridges were reopened later in the day.

As it floated on the Hudson, the four-deck, 300-foot-long Captain JP Cruise Line crashed into the Congress Street Bridge before coming to a stop when it got wedged against the Livingston Avenue Amtrak bridge, police said.

Amtrak trains were forced to reduce speeds as they approached the bridge.

Two Coast Guard ice-breaking cutters and a pair of commercial tug boats worked throughout the day to dislodge the cruise ship, eventually freeing it at 3.30pm and then towing it back to its starting point in Troy, according to CBS 6 Albany.

The Coast Guard said that the other four boats that floated downriver were also tracked and secured by Friday afternoon.

The incoming polar vortex is expected to cause temperatures to plummet in some areas to as little as minus 60 degrees below Fahrenheit when windchill is factored in. 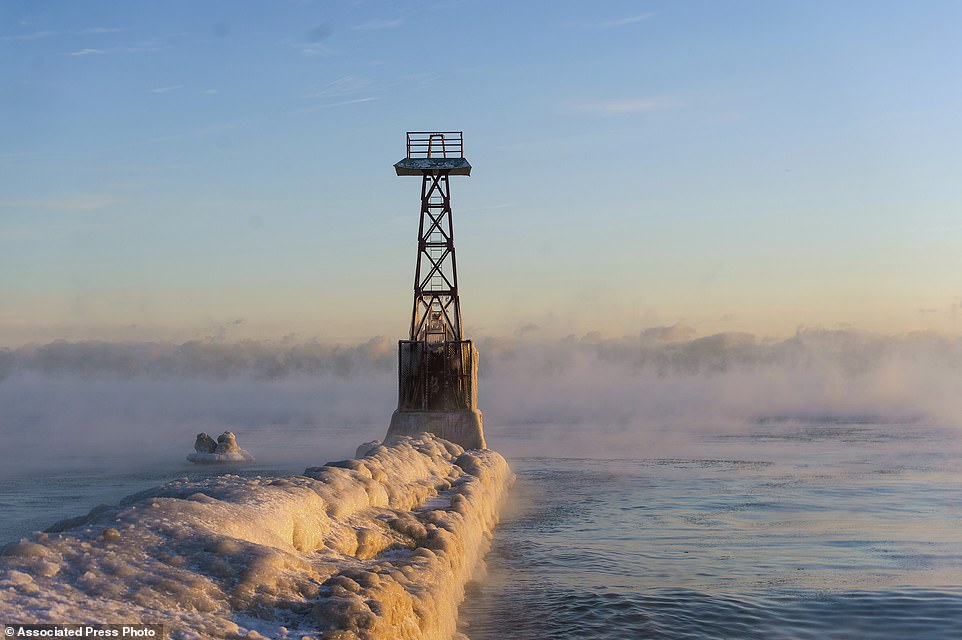 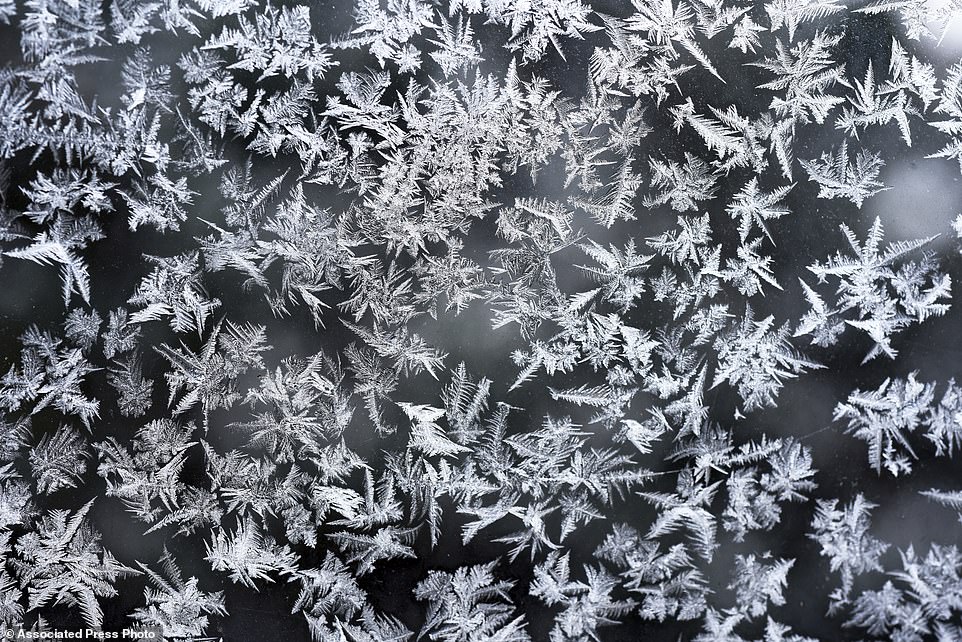 Frost forms patterns on the window of a St. Joseph, Mich., home  on Friday. Bitterly cold temperatures are expected to arrive in Southwest Michigan in the next several days with lows falling below zero 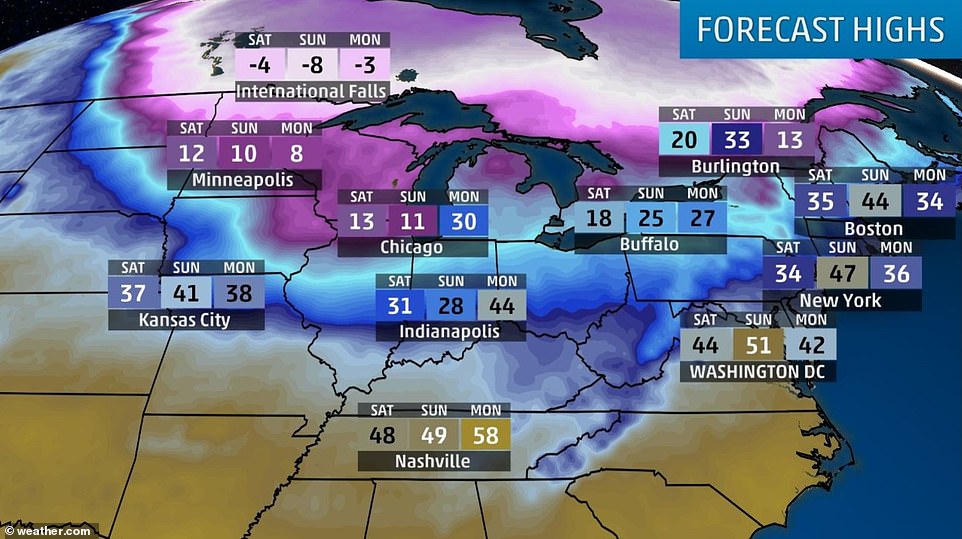 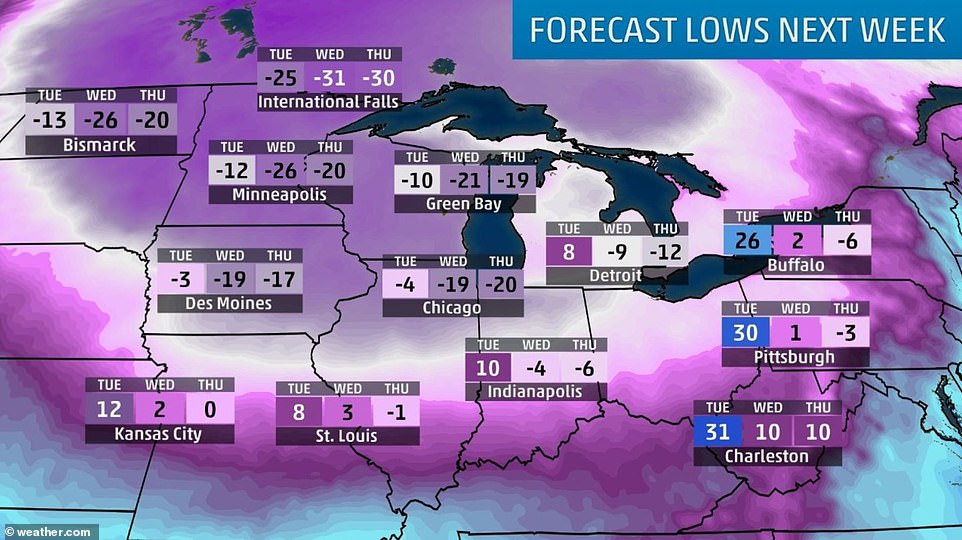 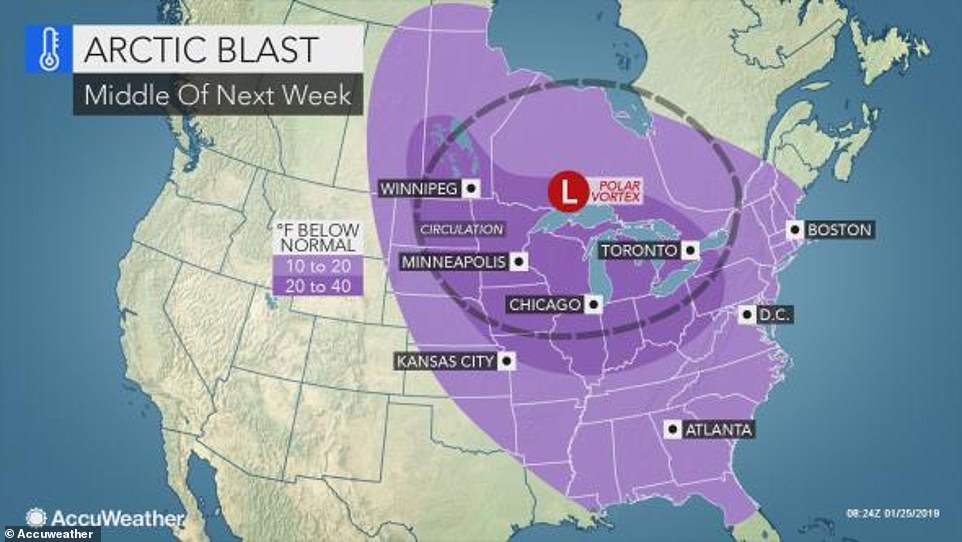 By midweek the wind chills will feel as low as 45 below in Chicago, forecasters have warned 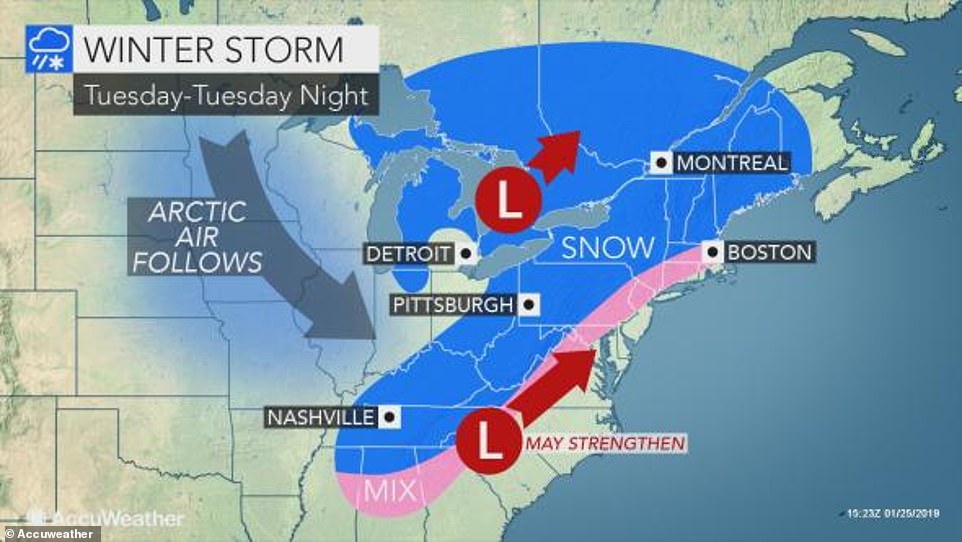 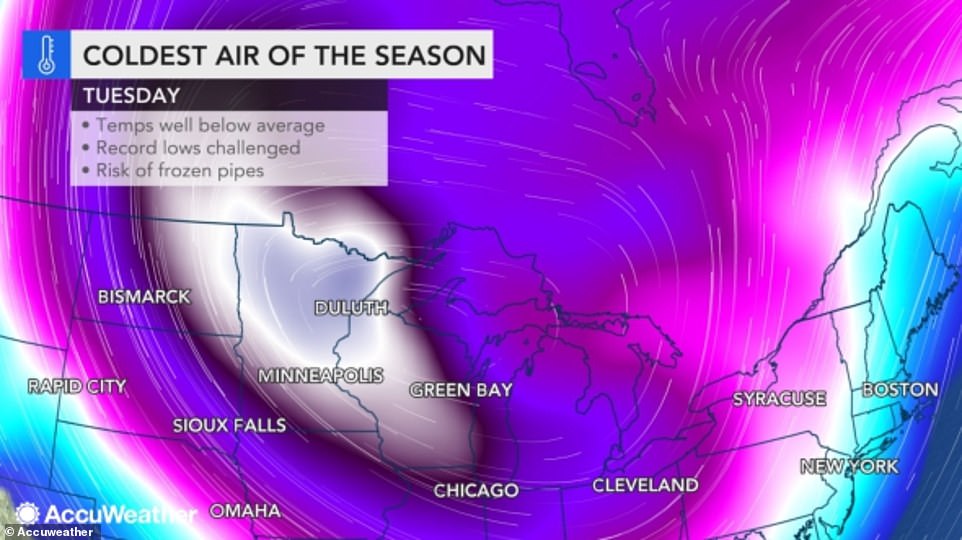 As the country gears up for a bitterly cold weekend, forecasters have warned there is worse to come as a replay of the ‘polar vortex’ that bludgeoned the U.S. in 2014 hits.

Jeff Masters, meteorology director at the private Weather Underground, said: ‘We’re going to be feeling it big time. It’s going to be the coldest air in five years.’

Forecasters said it could be even colder this time round with wind chills by midweek reaching as much as 45 degrees below Fahrenheit in Chicago.

Meanwhile, in Wisconsin, forecasters as much as a foot of snow to fall from Sunday to Monday, with temperature lows of minus 20 degrees, which would feel like anywhere from minus 40 to minus 60 degrees with windchill, according to the Wisconsin State Journal.

Friday’s arctic blast, which spread painful cold across the Midwest on Friday, resulted in school closures and the opening of warming centers.

Cold weather advisories were in effect Friday from North Dakota to Ohio, with dangerously cold wind chills predicted to dip to as low as 45 below zero in northern Wisconsin and Minnesota and to 35 below in parts of northern Illinois and Iowa.

Meteorologists said when the polar vortex plunges into the U.S., it will be warmer in parts of the Arctic — Greenland, northern Canada and Alaska — than in Chicago and Minneapolis. 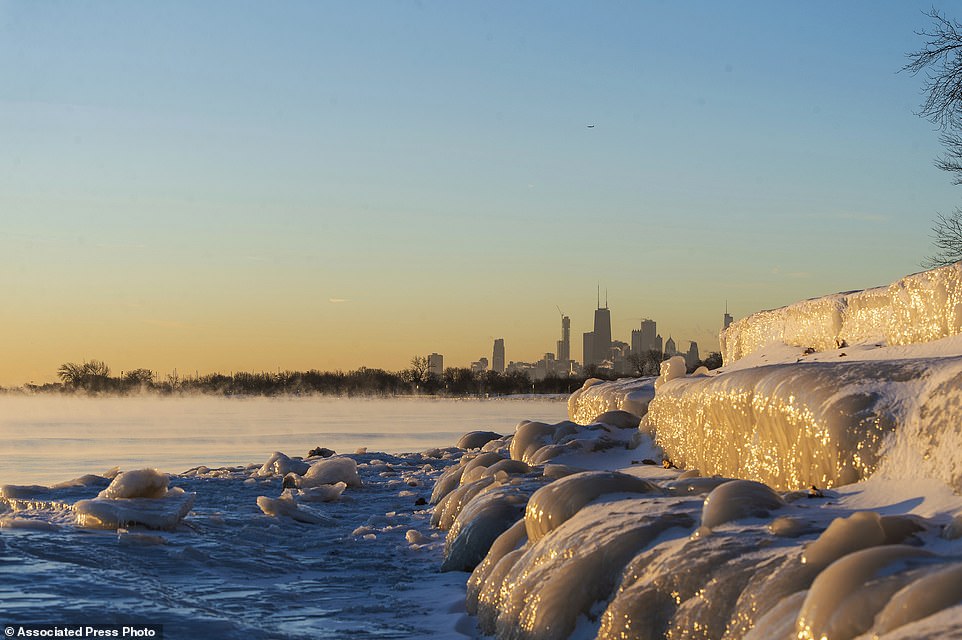 Chicago’s lakefront is frozen over Friday. The National Weather Service had a wind chill warning in effect until 12pm Friday for counties in Illinois 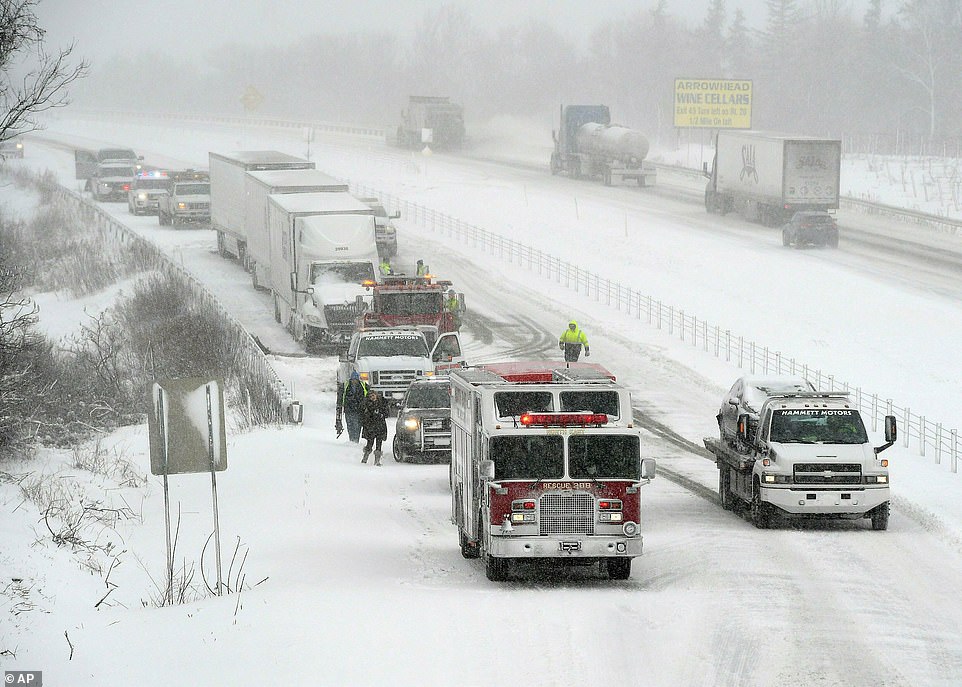 The westbound lanes of Interstate 90 in North East Township, Pennsylvania, were shut down for almost two hours following a series of crashes just east of the Bort Road overpass on Friday 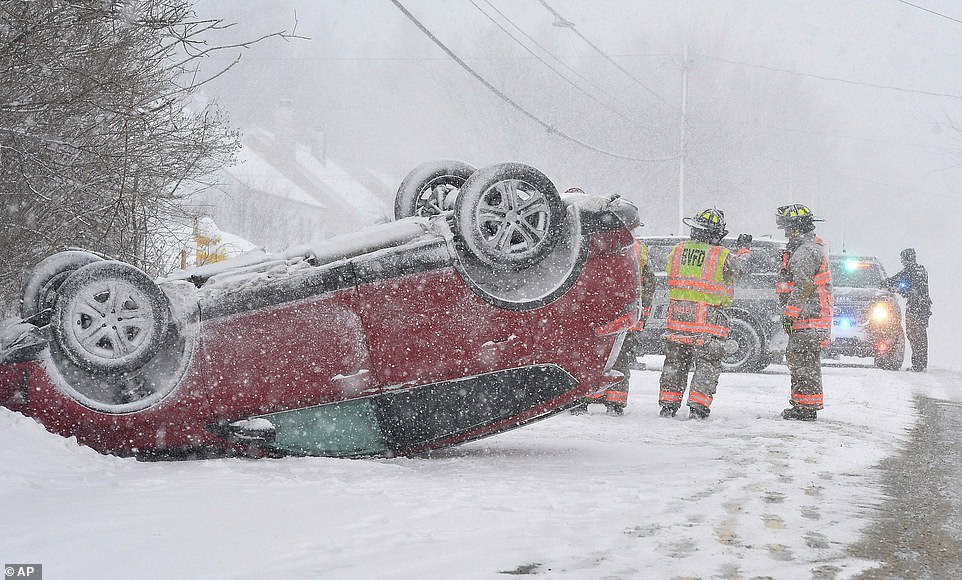 A woman was transported to the hospital after a one-car accident in Millcreek Township, Pennsylvania Friday. Her SUV flipped during white-out conditions and heavy lake-effect snow 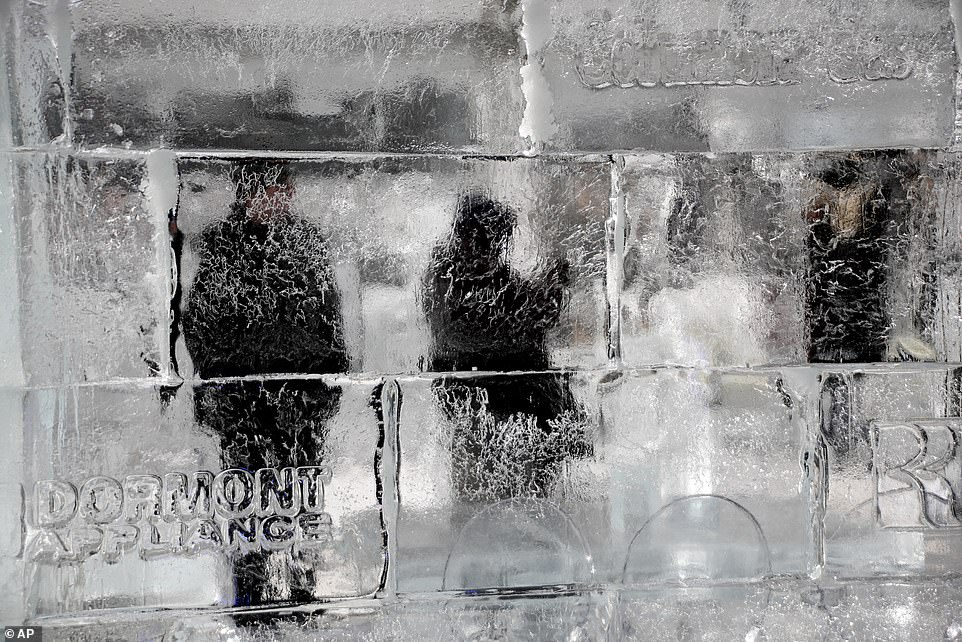 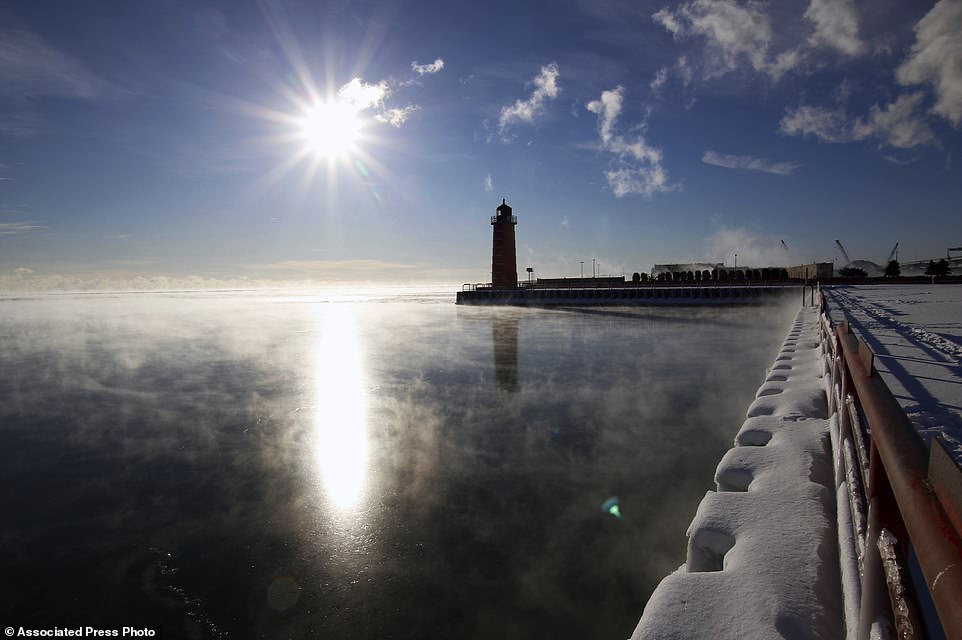 Steam rises from Lake Michigan on Friday morning in Milwaukee. An arctic wave has wrapped parts of the Midwest in numbing cold, sending temperatures plunging and prompting officials to close dozens of schools Friday, but forecasters say the worst may be yet to come 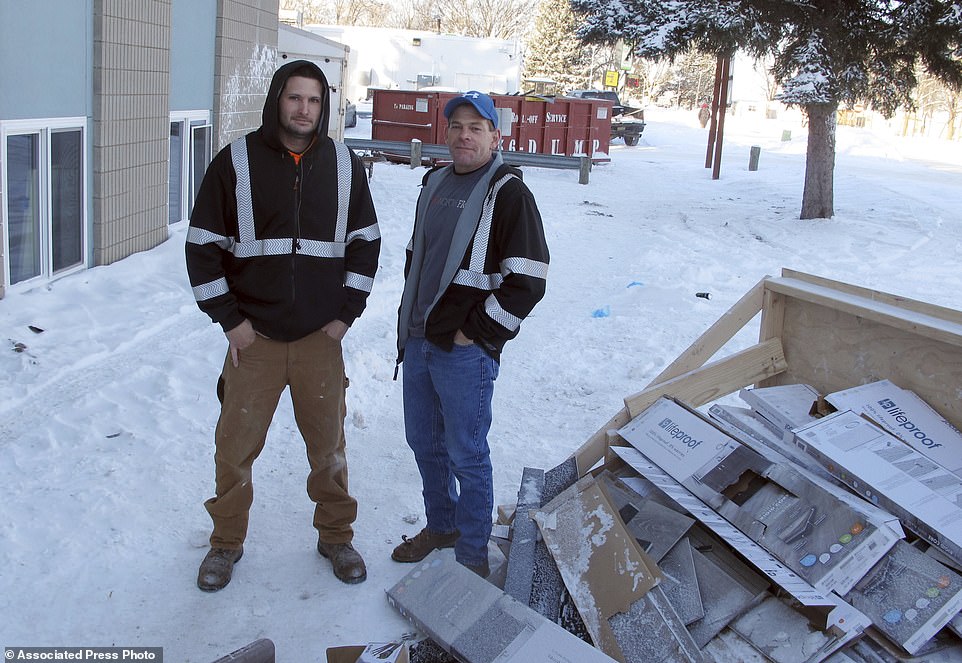 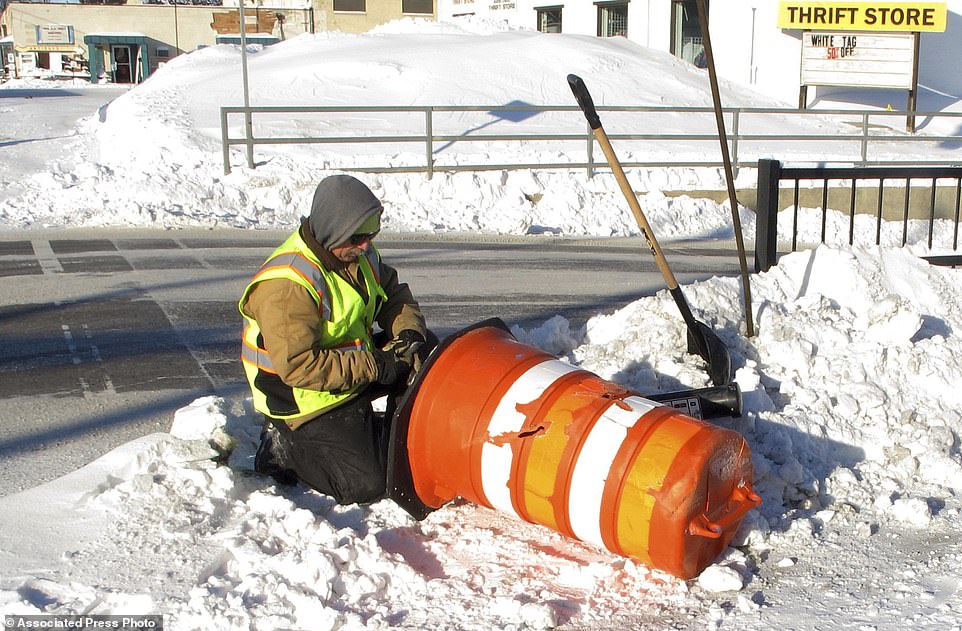 Jason Gion, an employee for the city of Fargo, N.D., works in 15-below temperatures

Masters said the cold snap is due to the polar vortex, the gigantic circular upper air weather pattern in the Arctic region enveloping the North Pole, splitting into three pieces in late December because of an occasional weather condition called ‘sudden stratospheric warming.’

One chunk of that trapped cold air went to Siberia, another to Scandinavia, and the third piece is heading through Canada. On Wednesday, it will be over northern Michigan somewhere, he said.

The polar vortex rarely plunges as far south as the U.S., maybe every few years or more, Maue said. The last big plunge was Jan. 6, 2014, when Chicago’s temperature dipped to minus-16.

In northern Michigan, residents of islands in the river connecting Lake Superior and Lake Huron were warned to stock up on supplies in case ferry service was cut off. In Chicago, warming centers opened.

Kenny Blackwell and his son, Corey, moved from Virginia to North Dakota to help build low-income housing projects. Outside their current project on Friday, they chuckled at a cellphone showing the temperature at minus-10 and said it felt more like Alaska.

‘The money here is great but the weather here is so nasty it made my dad’s hair freeze,’ Corey Blackwell said. ‘We had to go out and buy some North Dakota clothes!’

Ice fishing guide Bryan Lang acknowledged that extreme cold was part of his job in northern North Dakota, but he said he felt lucky to have taken Friday off work: the morning temperature was negative 21 degrees (negative 29 Celsius) with a wind chill of minus 42 (negative 41 Celsius).

‘I’m glad to be in the house drinking coffee,’ he laughed. 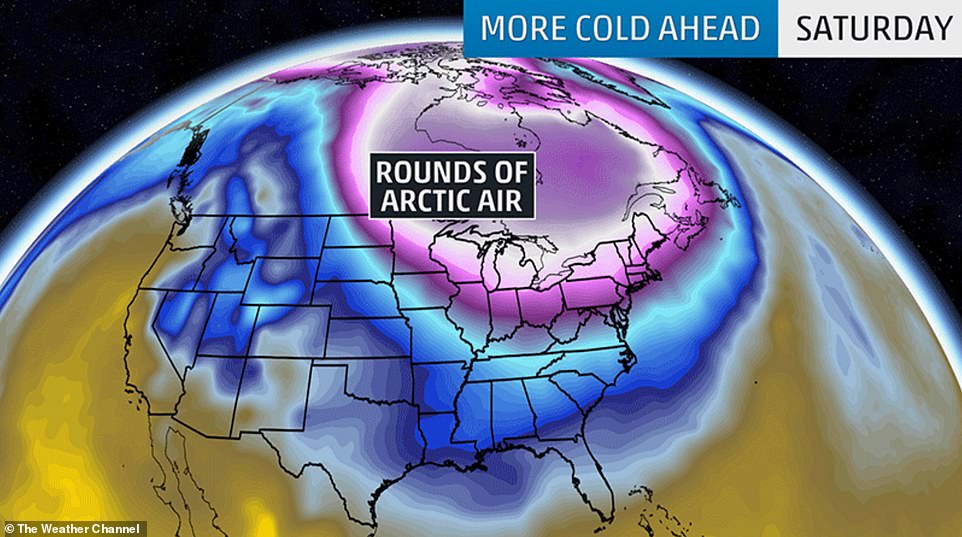 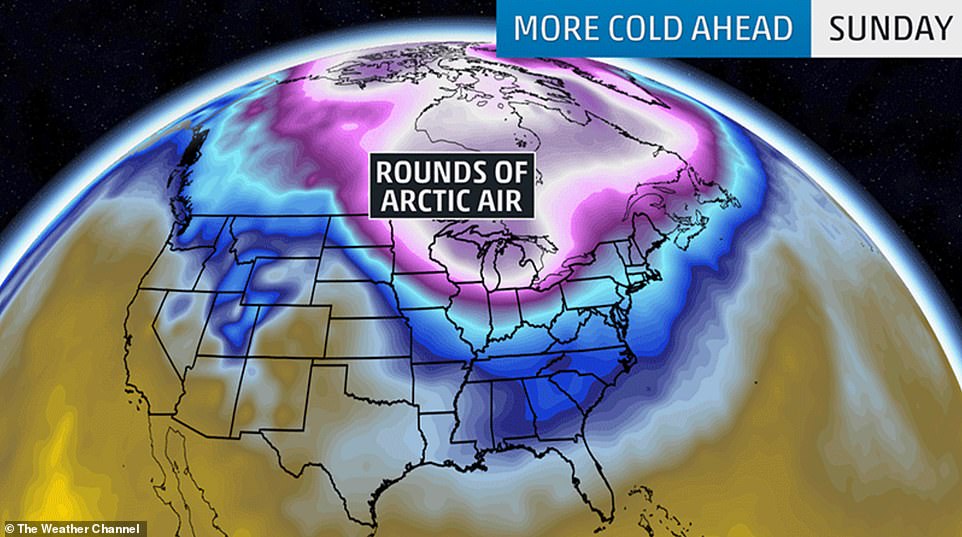 When the polar vortex plunges into the US, it will be warmer in parts of the Arctic than in Chicago and Minneapolis 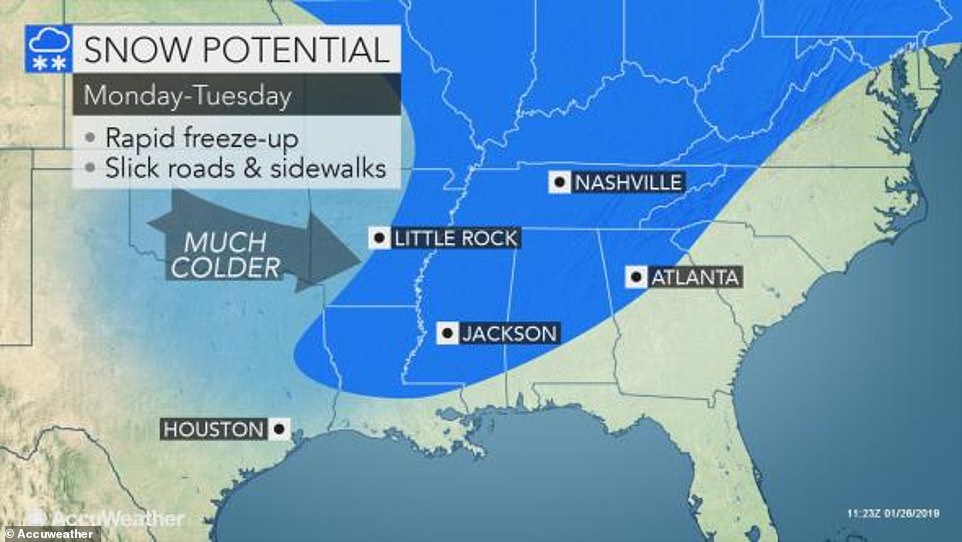 Colder than normal temperatures are expected to hit the South as far as the Gulf Coast, too

The deep freeze caused organizers of the Winter Carnival in Minnesota to cancel several events, including Thursday night’s parade through downtown St. Paul.

The low temperatures also forced the cancellation of events in the Fargo Frostival, a celebration of winter activities in North Dakota’s largest city. Organizer Charley Johnson joked that the Undie Run will go on Saturday as scheduled, but that long underwear was encouraged.

‘We’re going to persevere no matter what with most of these events,’ Johnson said. ‘We know they’ll be smart about it. The people will bundle up and not stay outside too long.’

The Midwest and Northeast won’t be the only parts of the country potentially impacted by the polar vortex, though.

The Arctic front is expected to pass through the South, as far down as the Gulf Coast, according to AccuWeather.

In Little Rock, Arkansas, temperatures on Monday are expected to peak at 60 degrees Fahrenheit, before plummeting to the low 20s. New Orleans, meanwhile, si expected to see temperatures reach the freezing point for the first time since January 2018.

Despite daylight hours usually posting warmer temperatures, AccuWeather Meteorologist Rob Richards said that ‘many locations across this part of the country will be about 15-20 degrees below average.’

Some southern areas are also likely to see rainfall turn into snow as the chill settles in, with snow beginning to accumulate on Tuesday.