People heading out on Sunday morning have been warned of a risk of icy conditions in parts of the country after Storm Deirdre swept through bringing heavy snow, freezing rain and gales.

The storm hit one of the last major shopping days before Christmas on Saturday, causing havoc on the roads and misery on the high street for retailers hoping for a festive sales boost.

A series of weather warnings is due to expire as the morning progresses, with improved conditions expected as Sunday goes on, providing a welcome boost to high street retailers.

A man clears snow from the driveway of a hotel today in Dalwhinnie, Scotland, where several inches fell overnight. Despite the chilly conditions today is set to be brighter and drier than yesterday, providing a welcome boost to the high street 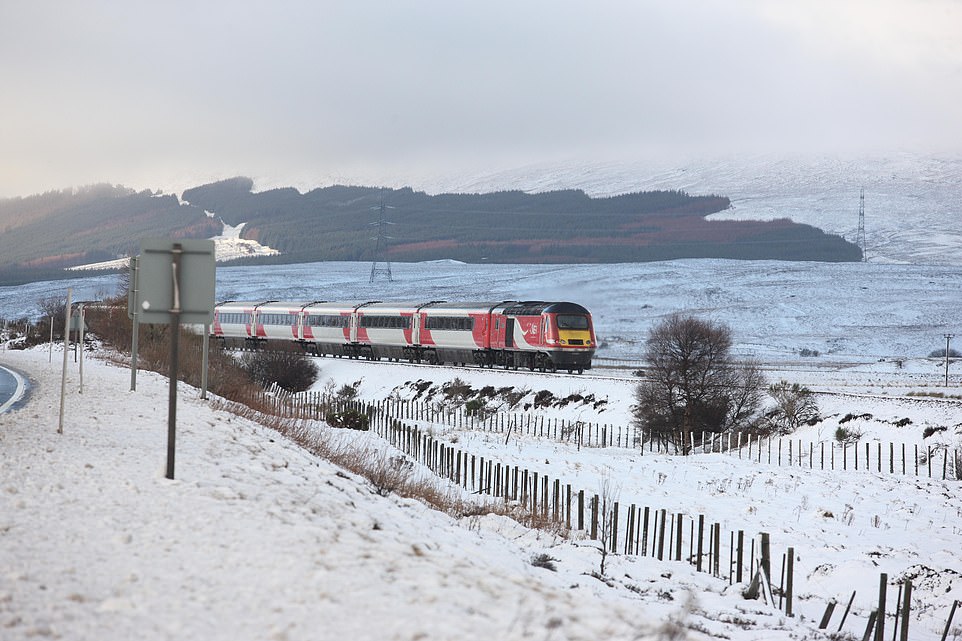 The rail service from Inverness to Perth moves across a snowy landscape this morning, as forecasters said several ice warnings remained in place 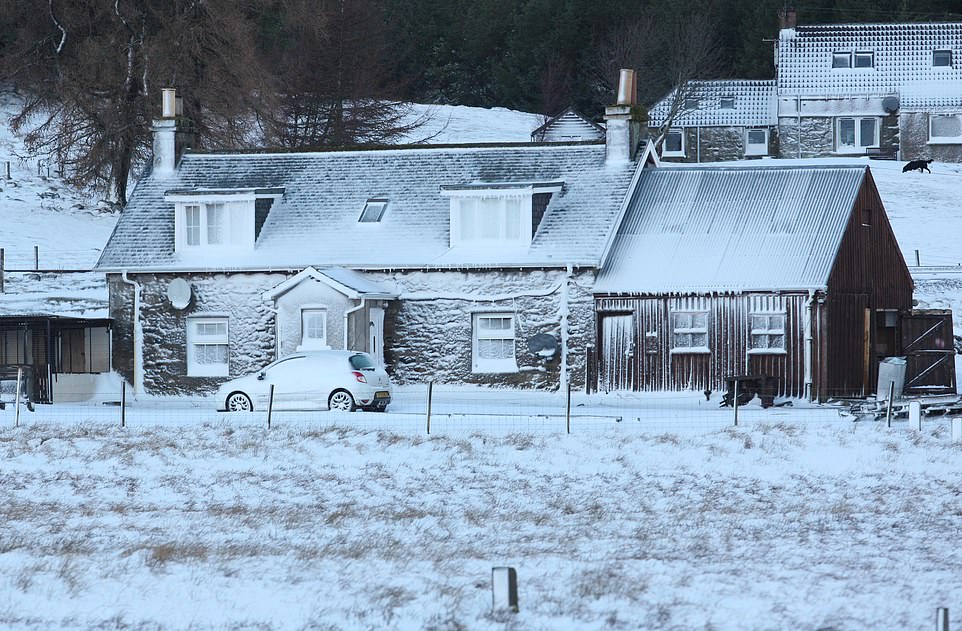 A snow-covered house in the Scottish Highlands village of Dalwhinnie this morning. Falls are expected to be confined to high parts of Scotland and northern England 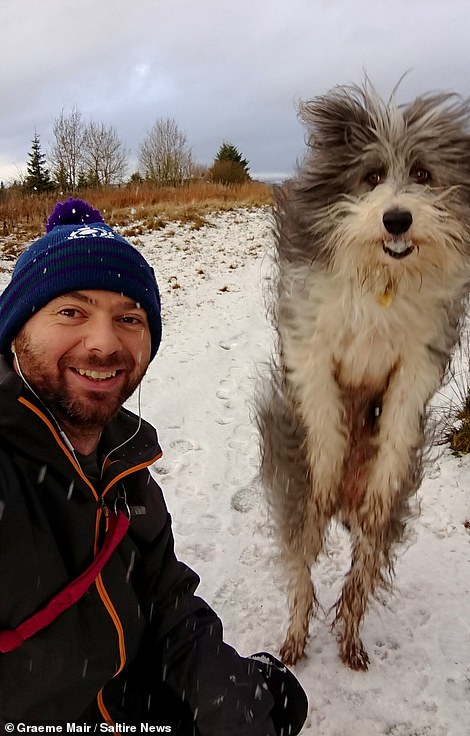 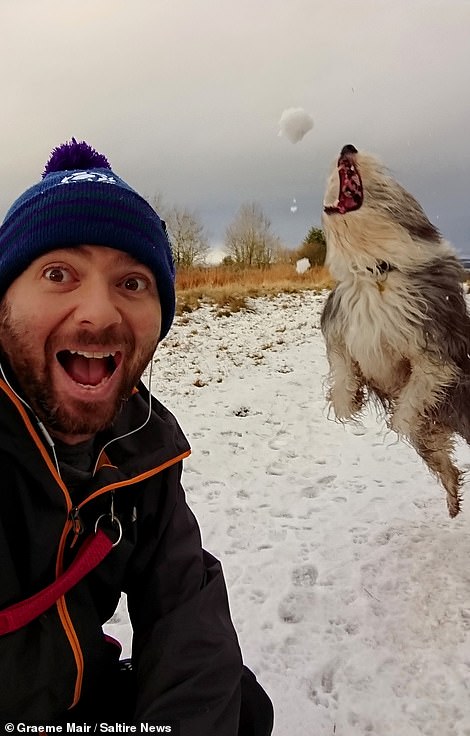 Dempsey, a bearded collie, was clearly enjoying the snow as he showed off to the camera with owner Graeme Mair near Dublane

Figures suggested the number of shoppers hitting UK high streets was down more than 9% compared with the same time last year, dealing a blow to struggling retailers relying on a festive bounce in sales.

On what is usually expected to be the peak trading weekend before Christmas, overall footfall for shopping centres and retail parks, combined with high streets, was down 7.3% up to 3pm on Saturday, retail intelligence experts Springboard said.

However, after Storm Deirdre brought gales, heavy snow and freezing rain to large parts of the UK, the weather on Sunday is expected to be more favourable to those heading out to shop.

Met Office forecaster Simon Partridge said: ‘Everywhere will be drier and much less windy on Sunday.

‘Just be wary if you are heading out early, there could be some icy stretches in the north-east of England and Scotland.

‘Other than that, just be aware if you are in England and Wales, there could be spells of rain and wind in the afternoon. If you didn’t head out to the shops yesterday, you could get most of it done today.’

Forecaster Steven Keats said that there was a ‘reasonable amount of uncertainty’ about the weather leading up to Christmas, with rain at times but also sunny intervals. He said any significant snowfall was unlikely.

Despite the generally more positive outlook, the Met Office said Britain could be hit by gales of up to 60mph on Tuesday.

Diane Wehrle, Springboard marketing and insights director, said: ‘If people are presented with really terrible weather, they then have the choice to shop online, and they can make other choices about what to do with their time.

‘That unfortunately offers them sometimes better alternatives than trailing around a town centre or a high street in freezing cold or rainy weather.’ 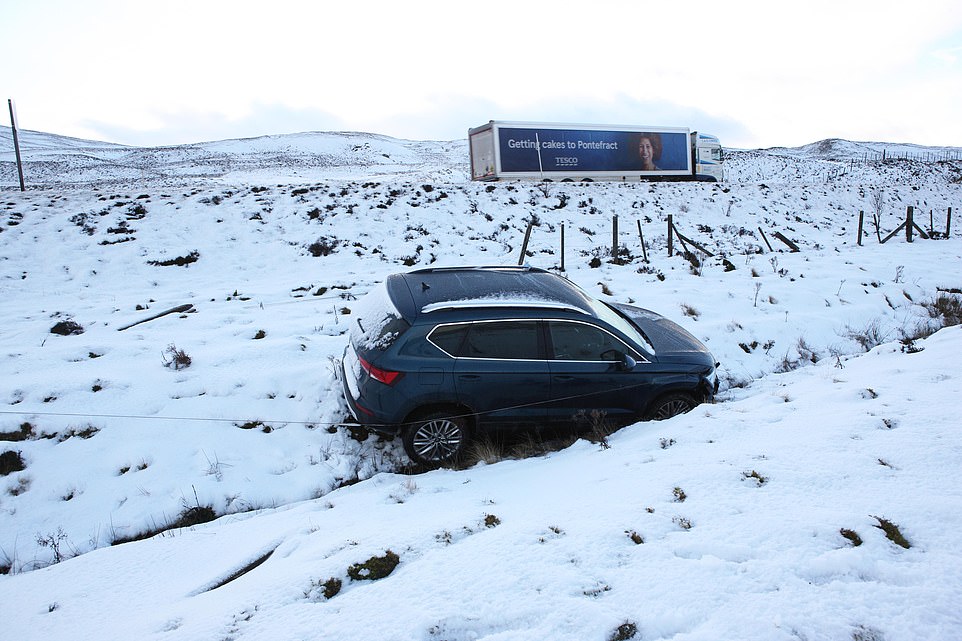 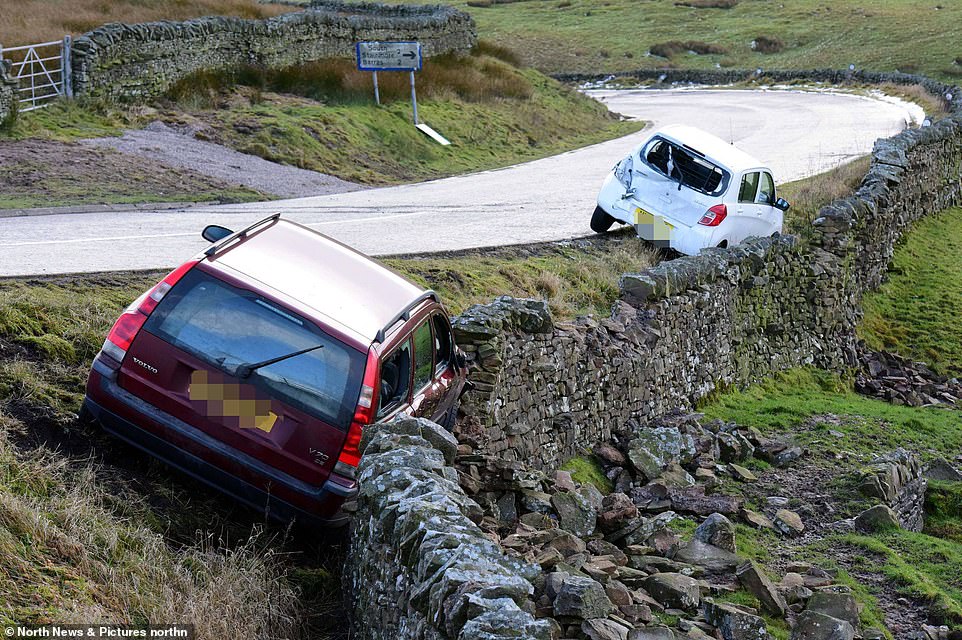 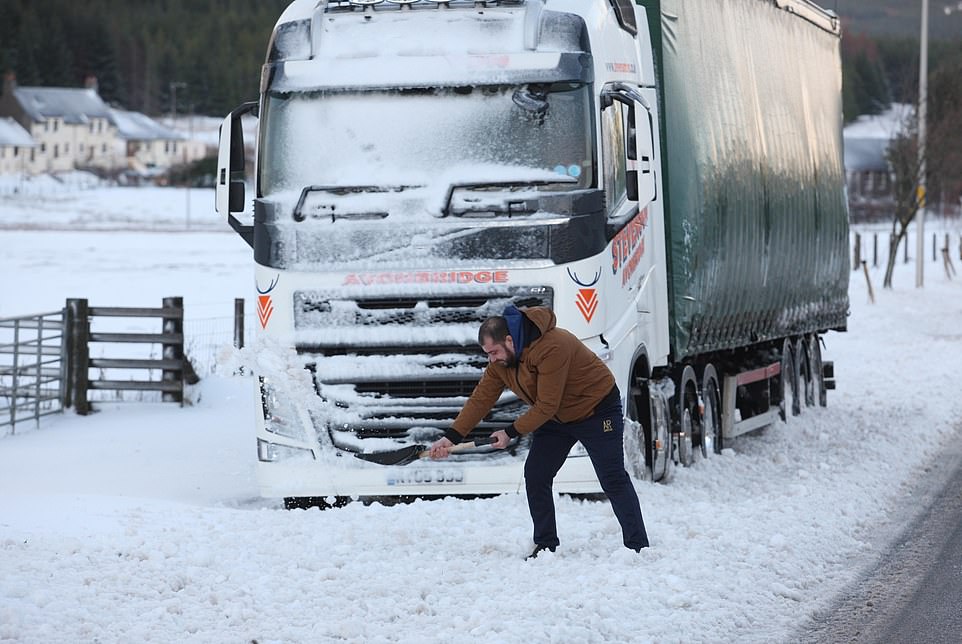 A series of weather warnings is due to expire as the morning progresses, with improved conditions expected as Sunday goes on, providing a welcome boost to high street retailers. Pictured: A man clearing snow from around a lorry in Dalwhinnie 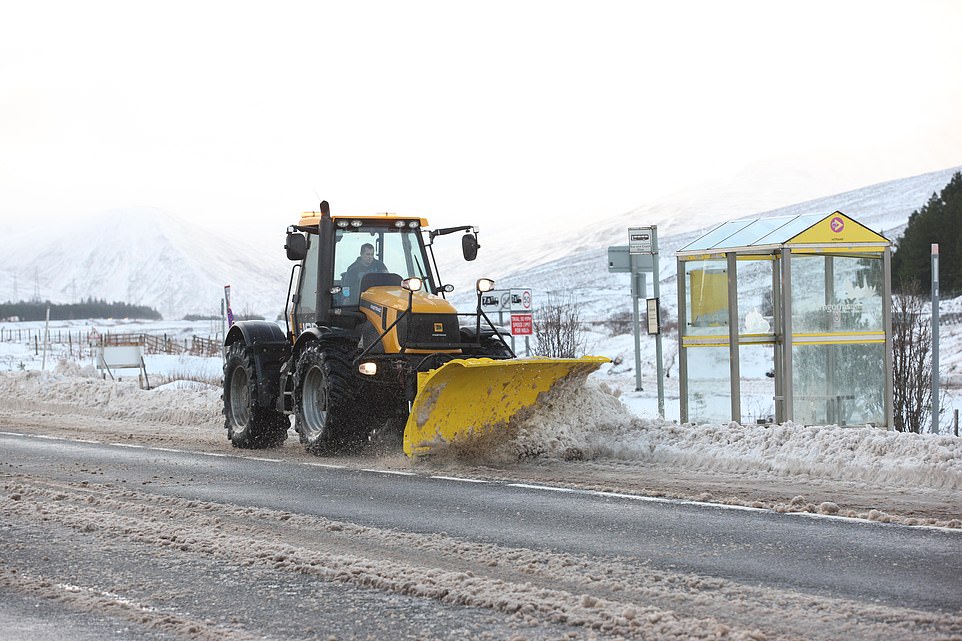 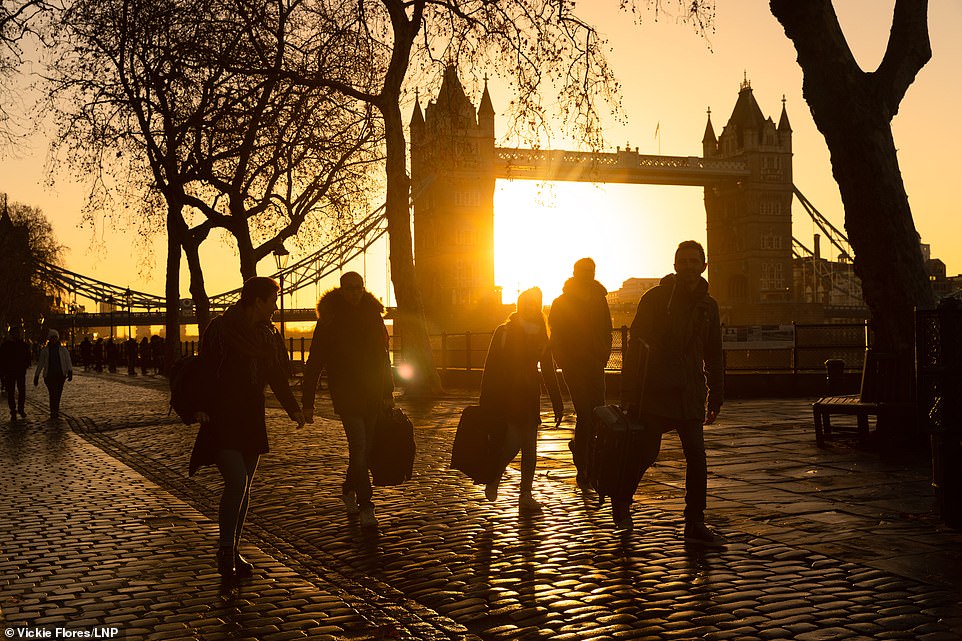 Brighter weather today, particularly in the south, should be a boon for Britain’s high streets, which saw footfall down by 7.3% up to 3pm on Saturday due to the inclement weather. Pictured are people walking on the River Thames path next to Tower Bridge this morning

Ms Wehrle said while footfall appeared to have picked up for the early part of the week – with a year-on-year increase of 6.1% in high streets, shopping centres and retail parks – it was a false positive as snow last year meant figures were already low.

She said Saturday’s figures were ‘severely down’ on last year, on what she described as a ‘peak trading weekend’.

Many shoppers may not venture out next weekend as it is so close to Christmas Day, she added, saying they could have already travelled to wherever they are spending the holidays, and may feel discouraged by unfavourable weather forecasts.

Predicting a difficult week ahead, she added that retailers will have been hoping for a last festive lift after what has been a difficult year.

Figures in September showed the UK to be suffering its worst year on record as in-store sales declined for the eighth month in a row.

The bargain bonanza of Black Friday last month also disappointed, with data showing the biggest drop in footfall for that week in three years. 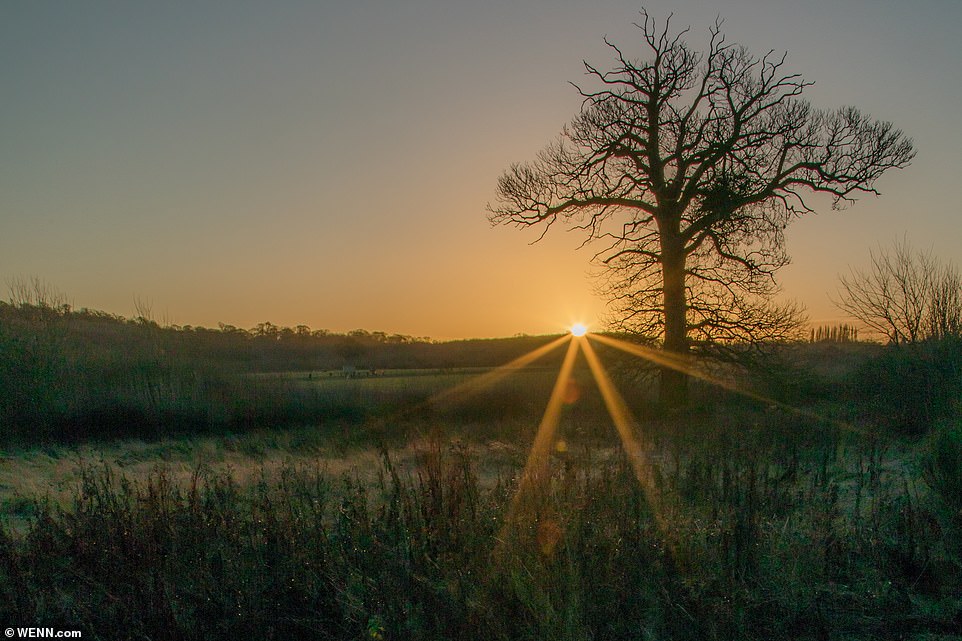 It was a beautiful start to the day at this country park in Cobham, Kent. Met Office forecasters said conditions will be better today after the passing of Storm Deidre, which was still lingering this morning over parts of northern Scotland 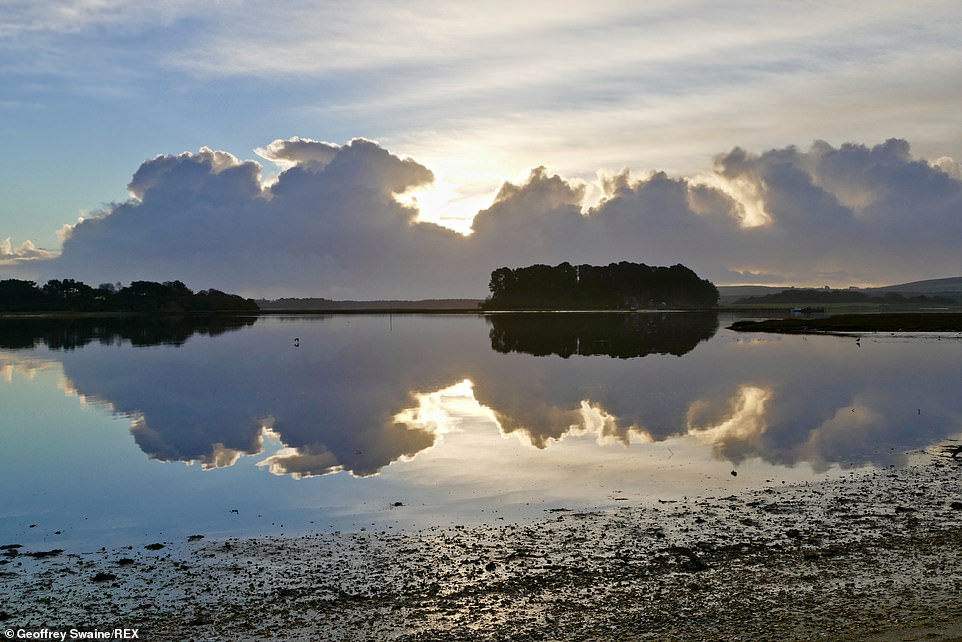 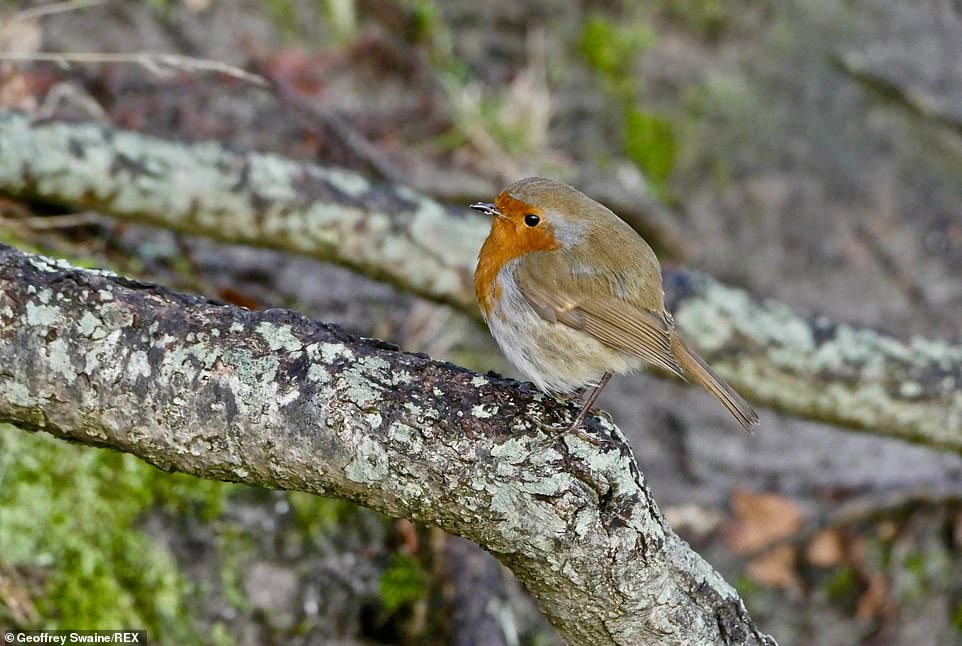 Forecaster Steven Keats said that there was a ‘reasonable amount of uncertainty’ about the weather leading up to Christmas, with rain at times but also sunny intervals. Pictured: A robin perches on a branch on Shipstal Beach 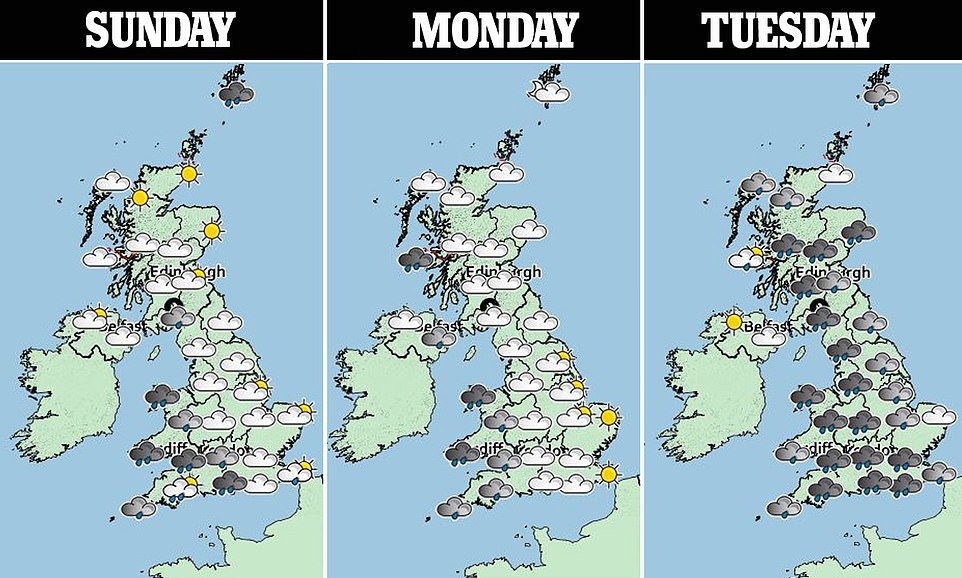 Rachel Lund, head of insights and analytics at the British Retail Consortium, presented a more positive picture, suggesting shoppers may still turn out for the final few days before December 25.

She said: ‘While we have seen a slow start to the Christmas period, changing technology and shopping habits means that many consumers will be leaving their shopping to the last week before Christmas – historically the most important for retailers.

‘Nonetheless, given the challenging year on the high street, retailers will be hoping for strong sales this weekend and next as consumers buy both food and presents before Christmas Day.’ 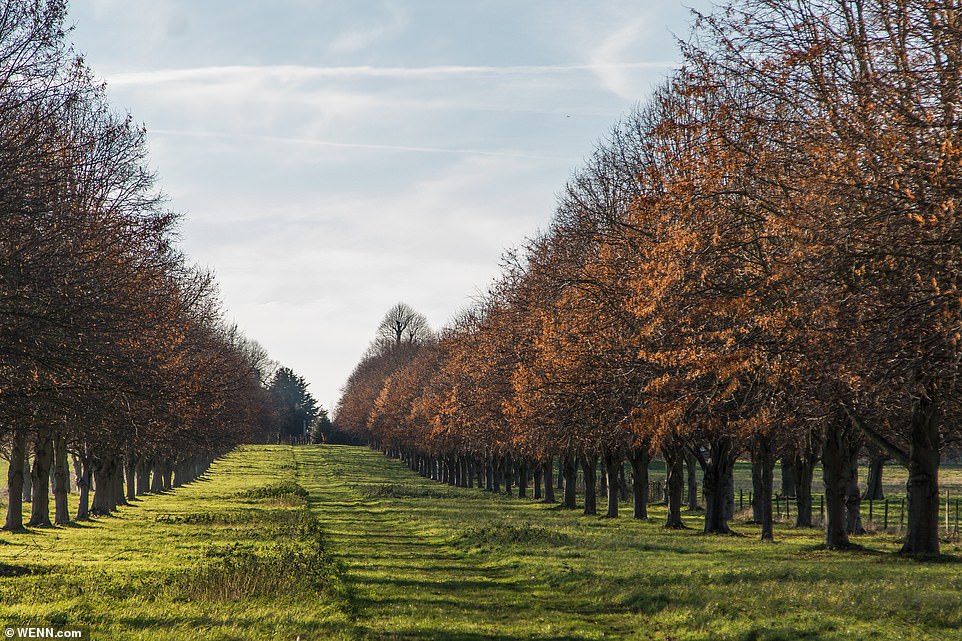 Met Office forecaster Simon Partridge said: ‘Everywhere will be drier and much less windy on Sunday.’ Pictured: A row of illuminated by the morning sun at a country park in Cobham, Kent 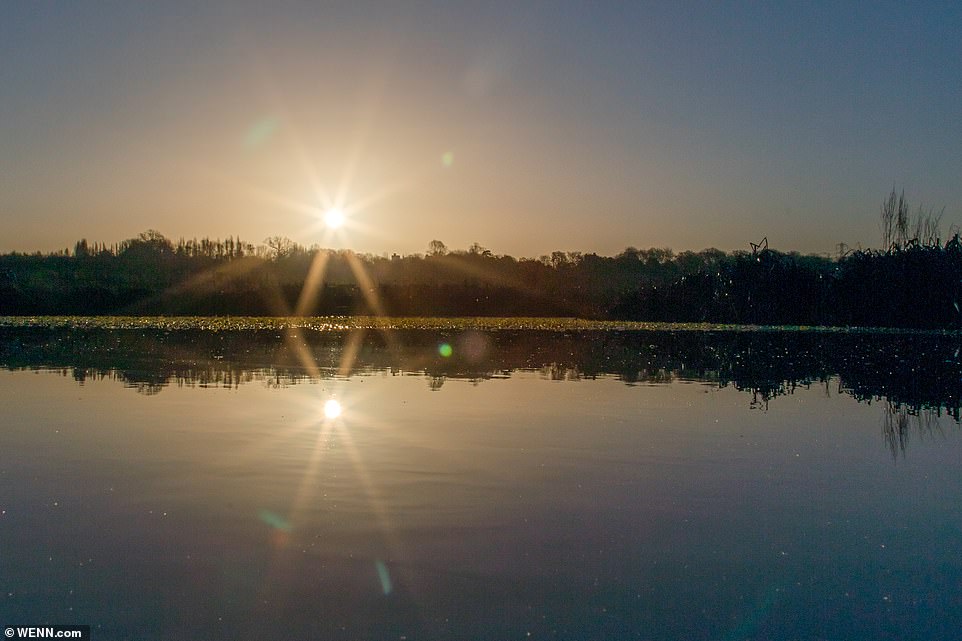 The rising sun glints off the surface of a lake at a country park in Cobham, Kent, where conditions were much improved following yesterday’s washout