Smooth as a berg’s bottom! Iceberg in Argentina flips over in freezing ocean to reveal shimmering blue underside

This is the rare moment an iceberg in an ocean flipped on itself to reveal its shiny blue underwater bottom.

Italian filmaker Stefano Tiozzo was on a tourist boat filming the stunning view of Los Glaciares National Park, in Argentina, when the floating body of ice suddenly turned on itself with a massive roar.

As the other passengers were shouting with excitement, Stefano captured some shots of the iceberg’s previously hidden base as it rolls above the surface.

Italian filmaker Stefano Tiozzo was on a tourist boat filming the stunning view of Los Glaciares National Park, in Argentina, on November 26, 2018, when the floating body of ice suddenly turned on itself with a massive roar. 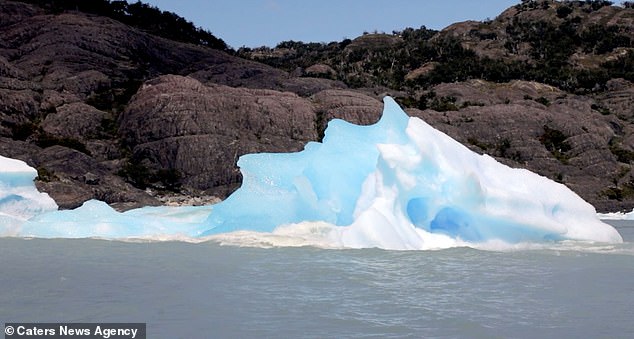 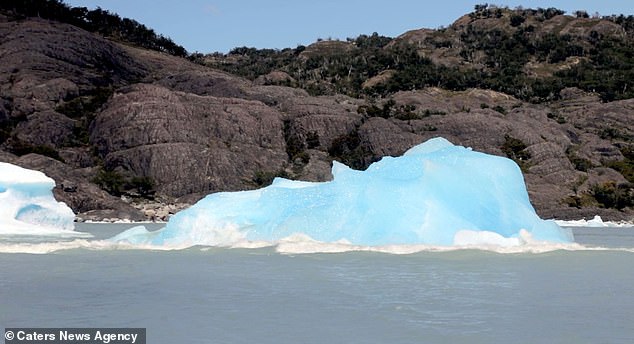 As it settled, the iceberg appeared to glow bright blue under the midday sun

As it settled the glacier appeared to glow bright blue under the midday sun.

Stefano said: ‘I was lucky to have my camera switched on before the iceberg started spinning.

‘That way I was able to film the whole transition of colours and shapes which was exceptional to see.’

The boat from which Stefano filmed was cruising on Lago Argentino, the biggest lake in the country, which gets its waters from the melting glaciers close-by.

He said: ‘Most likely, the iceberg had detached from the Spegazzini glacier a few weeks before.

‘Icebergs flip over a number of times during their lifespan, because their underwater surface melts faster and becomes lighter than the one above, causing their centre of gravity to switch.

‘However, it happens once every few months, and it’s a very rare thing to be able to see.

‘Even the guide on the boat said it was the first time he had seen something of this kind.’