States across the Southern and Eastern United States are facing freezing temperatures with icy winds, frost, snow and…iguanas expected to fall in parts.

The unusual reptilian addition to the usual list of wintry weather elements was issued in Miami, southern Florida, – home to a booming iguana population.

The National Weather Service in Miami issued its forecast for iguanas on Twitter. ‘Don’t be surprised if you see iguanas falling from the trees tonight,’ it tweeted.

The weather forecaster said because iguanas were cold-blooded they slowed down, or became immobile when temperatures dropped below 45F.

As a result the iguanas appear to fall from the sky, onto streets, cars, pools, or even people walking around.

This poses a risk to people and property as iguanas are not small creatures. The adult male can grow up to 5 feet in length and weigh up to 20 pounds.

The reptilian creature, which is native to parts of Mexico, Central America, South America, and the Caribbean, generally does not handle cold very well. 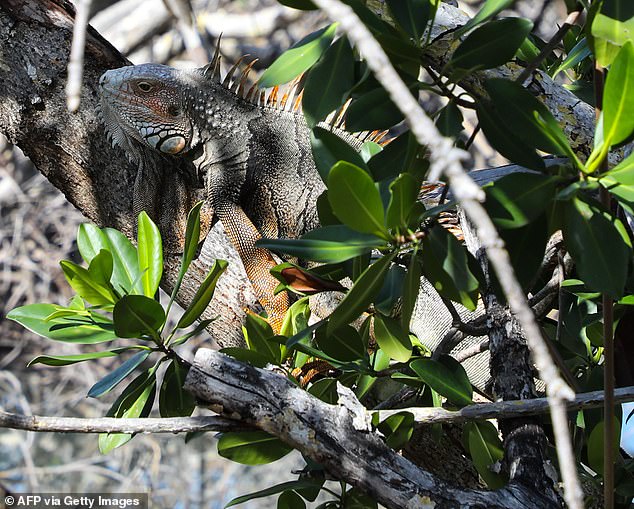 The green lizard is native to parts of Mexico, Central America, South America and the Caribbean. It tends to go into a dormant state – that causes them to appear dead – at temperatures below 45F. The fear is those sleeping in trees, like the one above, could then fall from the sky

They tend to get sluggish and lethargic in temperatures below 50F and go into a dormant or stunned state below 45F.

This gives the appearance the reptile is dead. However, as communications director Ron Magill for the Miami Zoo told CNN it is the body’s way of protecting the iguanas till temperatures are warmer.

‘The temperature threshold for when iguanas begin to go into a dormant state depends greatly on the size of the iguana,’ explains Ron Magill, communications director for Zoo Miami. ‘Generally speaking, the larger the iguana, the more cold it can tolerate for longer periods.’ 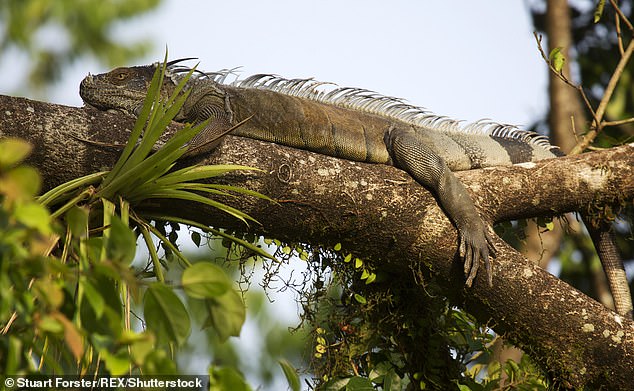 Iguanas (like the one pictured above) are considered an invasive species in South Florida. However, over the winter period when temperatures cool the reptiles can become sluggish and immobile making it easier for their numbers to be culled

He said if temperatures remain in the 40s for an extended period of time a large number of iguanas will die, in particular the smaller ones.

However, Magill said because it was an invasive species not all would mourn the loss of a number of the reptiles.

‘I do know that there are several iguana hunters that are looking forward to this upcoming cold front as it will certainly facilitate them removing these invasive reptiles from the South Florida environment as they will not be able to run away.’