President Donald Trump’s pick to become the next attorney general said Tuesday that he would ‘not go after’ marijuana companies in states where cannabis is legal, even though he personally believes the drug should be outlawed.

In his testimony before the Senate Judiciary Committee, William Barr said he would not use limited government resources to target cannabis businesses that are complying with state laws.

Businesses in the marijuana industry relied on Obama-era guidance that kept federal authorities from cracking down on the pot trade in states where the drug is legal, but those guidelines were rescinded by former Attorney General Jeff Sessions last year.

Pointing to the growing marijuana industry and investments in cannabis companies, Barr said he didn’t want to ‘upset settled expectations.’

Personal view: Bill Barr, Trump’s pick to be attorney-general, said his own view was that marijuana should be criminalized everywhere 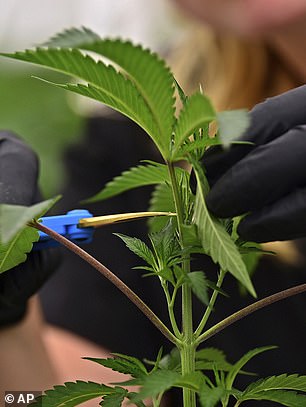 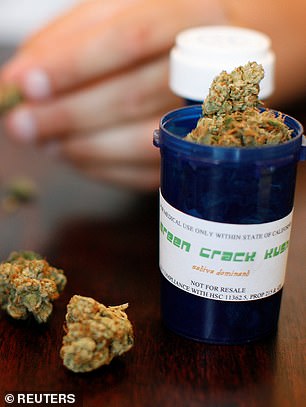 Big business: Legalized marijuana for both medical and recreational use has become a booming commercial enterprise in states which have legalized one or both

‘To the extent that people are complying with the state laws, distribution and production and so forth, we’re not going to go after that,’ Barr said.

Despite his affirmation that he would not target cannabis businesses, Barr said he would personally support a federal law that ‘prohibits marijuana everywhere.’

The largely hands-off approach to marijuana enforcement set forth during former President Barack Obama’s administration allowed the marijuana industry to flourish into a sophisticated, multimillion-dollar market that helps fund some state government programs.

Days after California’s broad marijuana legalization went into effect, Sessions rescinded the Justice Department’s guidance – known as the Cole Memo – and decried it as allowing a ‘safe harbor’ for marijuana by allowing states to flout federal law. 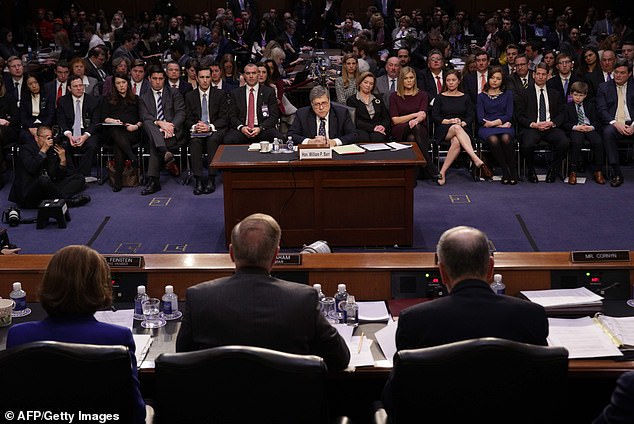 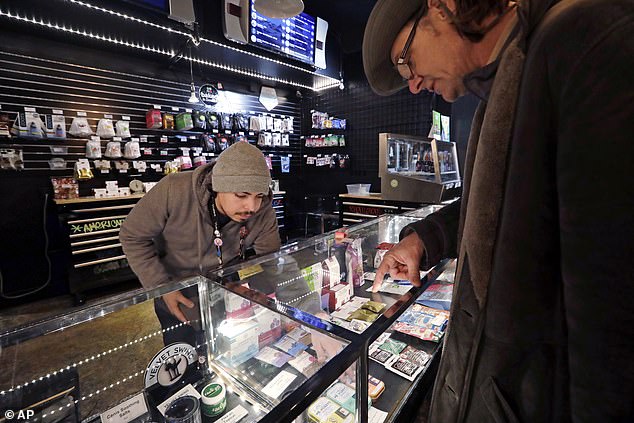 ‘Backdoor nullification’: Federal law still prohibits the possession and sale of marijuana but the DoJ adopts a hands off approach in states such as Washington where it is legal under state law

Since the guidance was rescinded, there has been concern about the future of the growing cannabis industry.

Despite medical and so-called recreational cannabis legalization in dozens of states, federal law prohibits the possession and sale of marijuana.

But Barr said the current system is ‘untenable’ and ‘almost like a backdoor nullification of federal law.’ He called for members of Congress to come up with a way to handle marijuana enforcement across the U.S.

He practices law at the firm of Kirkland & Ellis and served as a counsel to corporate boards and amassed an estimated $37 million fortune.

Barr penned an unsolicited memo about the Mueller probe and gave it do Deputy Attorney Gen. Rob Rosenstein.

He wrote that the probe of Special Counsel Robert Mueller’s probe was ‘fatally misconceived’ by going after obstruction of justice.

Barr is longtime friends with Mueller and the two men’s wives attended bible study together.

He attended Columbia University and did a stint in the CIA.

‘I think it’s incumbent on the Congress to make a decision as to whether we are going to have a federal system,’ he said. ‘Because this is breeding disrespect for the federal law.’

The intervention on marijuana came on the first day of a confirmation hearing overshadowed by Robert Mueller’s special counsel prone.

Barr told senators he would resist pressure to ax Mueller, including from the president, unless there was good cause to do so.

Asked if he would fire the special counsel – or if he would change Justice Department regulations and then fire him if asked to do so by the president without ‘good cause,’ Barr responded: ‘I would not carry out that instruction.’

He was pressed by Delaware Democratic Sen. Chris Coons and multiple other lawmakers on how he would handle Mueller, his longtime friend who President Trump has accused of overseeing a ‘witch hunt’ against him.

‘I don’t believe Mr. Mueller would be involved in a witch hunt,’ Barr said under questioning.

He revealed he met with President Trump in June 2017 when the president was seeking to expand his legal team, and who asked him at the time how well he knew Mueller.

‘I said Bob is a straight shooter and should be dealt with as such,’ Barr said he told the president.

The comments were among multiple markers of independence Barr put down during the hearing, where he also praised fired Attorney Gen. Jeff Sessions’ decision to recuse from the Russia probe and praised deputy attorney gen. Rod Rosenstein, another favore target of the president’s.

He also offered explanations for the unsolicited memo he sent to Rosenstein arguing Mueller’s probe was ‘fatally misconceived’ by going after possible obstruction of justice by the president.

And he refused to give Democrats commitments they sought repeatedly that he would yield to ethics professionals if they advised him to recuse himself from the Mueller probe.

‘I’m not surrendering that responsibility. I’m not giving it away,’ he said.

Asked by Democratic Sen. Kamala Harris of California under what scenario he would not follow the advice of career ethics officials, he said curtly: ‘If I disagreed with them.’

But on other matters, Barr told lawmakers he didn’t need the high-level job he has previously held, would not be ‘bullied’ by anyone, and stated explicitly several instances of interference in prosecution that would be improper or illegal.

Barr said the president would violate his oath of office if he ordered the Justice Department to take an action in which he had a ‘stake.’

Barr made that statement as part of a hypothetical example during his first day of high-stakes testimony before the Senate Judiciary, when asked about his views on executive power and whether the president could intervene in political cases.

He made the comments as on a day when he backed up his friend Mueller, and said longtime Trump foil former Attorney Gen. Jeff Sessions was probably right to recuse himself from the Russia probe.

But he also repeatedly refused under questioning by Democrats to state that he would relinquish powers he said were established in the office.

‘I am not going to surrender the responsibilities that I have,’ he said.

On the president’s powers, he said: ‘The other category of cases –and let’s pick an easy bad example – would be if a member of the president’s family or a business associate or something was under investigation and he tries to intervene.’

‘He’s the chief law enforcement officer, and you could say well he has the power, but that would be a breach of his obligation under the Constitution to faithfully execute the laws,’ Barr said.

‘So in my opinion, if a president attempts to intervene in a matter that he has a stake in to protect himself – that should first be looked at as a breach of his constitutional duties. Whether it also violates a statute depending on what statute comes into play and what all the facts are,’ he said.

Such pronouncement would ordinarily be boilerplate, but takes on extra significance while a probe President Trump has labeled a ‘witch hunt’ continues to examine Trump associates and family members who had contacts with Russians during the campaign.

Barr spoke as Senate Democrats pressed him on his views of the Mueller probe – including its investigation of any obstruction of justice by Trump, something Barr has criticized in writing.

Trump fired FBI Director James Comey early in his term, and according to Comey asked if he could relieve pressure on his former national security advisor Mike Flynn.

Research on public health outcomes in states where recreational use is legal has yielded a mixture of positive and negative outcomes.

As they were early adopters, much of this research focuses on Colorado and California.

Colorado saw a six percent drop in opioid overdose deaths in the two years following the legalization of recreational cannabis there, according to a study published in 2017.

Perhaps unsurprisingly, more adolescents use marijuana in any other state in the US.

But, since weed was legalized for recreational use in 2014, teens have actually been drinking less alcohol, using other drugs less and even using cannabis at the lowest rates in a decade.

There has been an uptick in hospitalizations for marijuana exposure in states where the drug is legal for recreational use.

So-called ‘drugged-driving’ has climbed sharply in states where marijuana is legal.

In fact, in 2016, half of all people who died in car accidents had marijuana, opioids or both in their systems at the time of death, according to a Governors Highway Association study.