Idaho university students have been given a choice: buy costly private health insurance, take up a church-backed plan that doesn’t cover birth control, or drop out of college.

While most universities require medical coverage, Brigham Young University-Idaho announced it will no longer accept Medicaid in a surprise statement last week.

The unique policy will come into effect the same day Medicaid is expanded across the state, to include Madison, where the university is based.

Local hospital officials have rubbished the university’s suggestion that an increase in students on Medicaid would hamper the local medical community.

For students wishing to continue their studies, they can buy their own private healthcare plan or sign up with the university’s Deseret Mutual Benefits Administration, a health insurance plan owned, like the university, by the Church of Jesus Christ of Latter-day Saints.

Casey Wilson and her husband Tanner, both students at BYU-Idaho with two sons, say Tanner is closer to graduating so Casey will be forced to drop out of school so their family can keep their Medicaid coverage

Deseret’s plan does not cover birth control, a violation of the Affordable Care Act that is legal due to a clause that allows university-funded healthcare plans to stipulate their own policies.

Most universities that fund their own plans comply with the ACA policies – including access to birth control.

But in 2015, Brigham Young University, with campuses in Utah, Idaho and Hawaii, broke the mold by refusing to provide free contraception.

‘It’s just an individual choice,’ BYU spokesman Todd Hollingshead said. ‘We leave it up to the individual to make that choice.’

The move drove thousands of students to shop around for other insurance, many choosing Medicaid, which is free for low-income people. Students who are not working, or have children to support, are often eligible.

But BYU-Idaho is trying to reign students back in.

The university announced the move in a statement: ‘Due to the healthcare needs of the tens of thousands of students enrolled annually on the campus of BYU-Idaho, it would be impractical for the local medical community and infrastructure to support them with only Medicaid coverage.’

Doug McBride, executive director for business development at Madison Memorial Hospital, the only hospital within 30 miles of the university, told Fox 13 that he saw no reason why a Medicaid expansion would be a problem.

‘We do not feel like the new Medicaid expansion is going to be an overburden for our community’s medical needs in the area,’ McBride said. 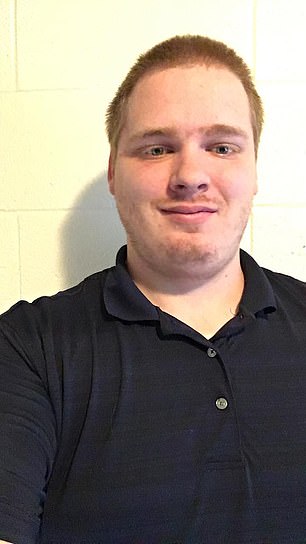 Andrew Taylor, a recent BYU-Idaho graduate whose wife still attends the school, said he is now trying to find a well-paid job to afford the new, expensive healthcare plan. He accused the university of forcing students to take the church-backed plan.

‘We feel we have the ability to handle those needs… We do not feel that that will be an overburden to us in any way.’

A spokesman for LDS said questions about the new policy should be referred to the university. BYU-Idaho has yet to respond to requests for comment.

Dismayed students have hit back at the policy, urging the school to reconsider.

Casey Wilson, a 24-year-old BYU-Idaho student and mother-of-two, wept as she told the Salt Lake Tribune she will be forced to drop out.

Her husband, and father of their sons, Tanner, is closer to graduating than she is, so their plan is for him to continue with studies, while Casey reverts to being a stay-at-home mom so they can keep their family’s Medicaid coverage.

‘I am devastated,’ Wilson told the newspaper.

‘I love school. I want to graduate. But we’re a struggling family, and we don’t have the money for [private insurance].’

She added: ‘There’s just not $500 sitting around for us to buy insurance from the school.’

Andrew Taylor, a recent BYU-Idaho graduate whose wife still attends the school, said he is now trying to find a well-paid job to afford the new, expensive healthcare plan.

He accused the university of forcing students to take the church-backed plan.

‘They are not giving us any reasons, so I’m led to believe probably the worst-case scenario,’ Taylor told Fox 13. ‘I am frustrated that I have been forced into this position.’