This is the horrifying moment an impatient ‘idiot boy racer’ almost wiped out two vehicles as he sped across a roundabout because he ‘couldn’t be bothered’ to wait in traffic.

Plumber David Jones, 39, sat in traffic jam as a Golf turned back on itself at the roundabout in Bradford on January 3.

Moments later, a silver BMW driven by ‘three young males’ raced around the lane intended for right hand turns at ‘around 50mph’ in the 30mph zone.

A silver BMW driven raced across a roundabout and smashed a car out of the way in Bradford, Yorkshire. David Jones, 39, filmed the terrifying moment and claimed the car was driving at around 50mph in a 30mph zone

Shocking dash-cam footage shows the ‘idiot boy racers’ failing to give way and try to squeeze through the gap between the two vehicles ahead of it – failing miserably.

The Golf driver is smashed out of the way – with enough force to remove the bumper and scatter debris across the road.

David, of Leeds, believes the trio driving the BMW are lucky there were no fatalities as he claims it was close. 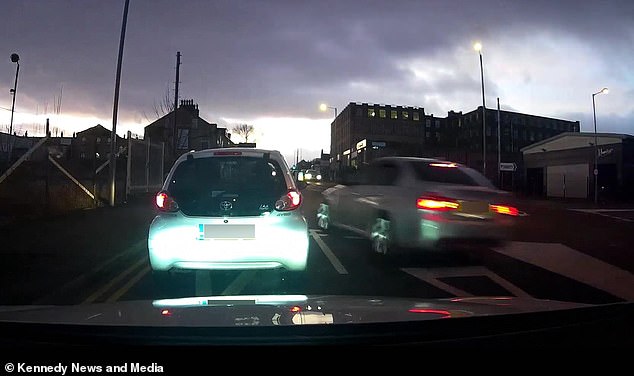 The silver car, pictured approaching on the right-hand side, ‘couldn’t be bothered waiting in stationary traffic’ and squeezed through a gap between two vehicles 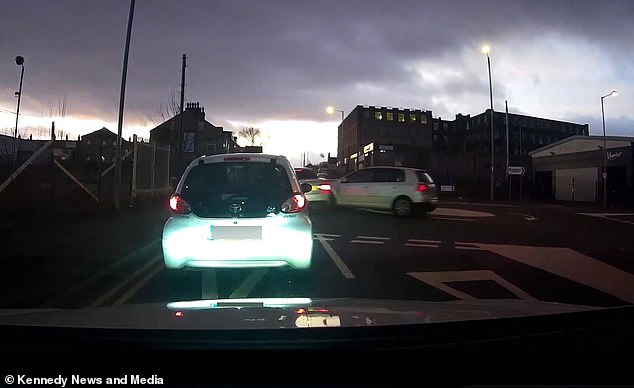 He said: ‘The driver is an absolute idiot, it’s dangerous driving and it could have caused death.

‘I think they acted in this way because they couldn’t be bothered waiting in stationary traffic, they are a queue jumper.’

Do you know anyone involved in the incident?

People ‘rushed to help’ the Golf driver whilst the people in the other car hesitated. They eventually saw sense and decided to stop.

No injuries were reported during the incident.

David later shared the footage to Facebook to make an example of the reckless driver.