If motherhood was so great, men would have swiped the job

My husband was away on business and it was October half term. I was on my own with three children under eight. I decided to swap London for a friend’s empty cottage in Kent.

I thought long nature rambles in the Weald. Apple scrumping. Picnic teas. It would be perfect.

So I loaded the car with the clothes, the medicines, the hair-detangling sprays, the eczema creams, the asthma inhalers, the special blankies, the nit shampoo, and all the things Coco the puppy needed, and drove to Canterbury.

Bikini-clad Liz Hurley, who lives in endless summer and her own-label swimwear, has delighted her legions of drooling fans yet again, this time with this snap of Her Hotness in a hammock in the Maldives during her half-term break

This took all day.

In the morning I was shaken awake. The rain was drumming loud on the roof. It was still dark. ‘We can’t get the TV to work,’ Milly whispered. ‘Yes you can,’ I said, ‘You’re a small child. Don’t ask me! Go away I’m trying to sleep!’

Five minutes later she was back. ‘The video’s not working either,’ she said. ‘Please Mum!’

I heaved myself downstairs and my three children were sitting in silence in front of a small, snowy screen in a cold, dark, strange room. 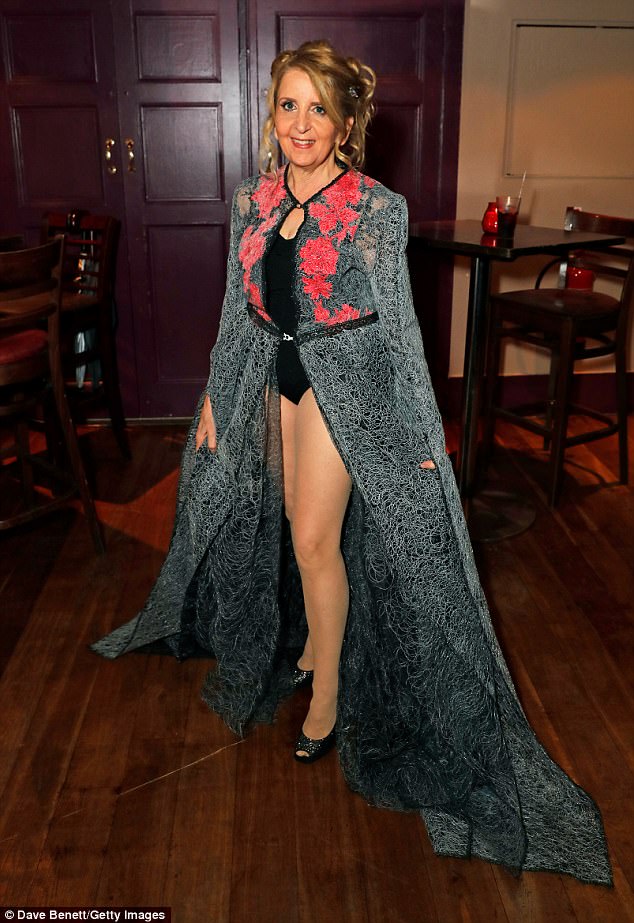 I literally have no words for this photograph of telly nutritionist Gillian McKeith at a premiere in London last week. It is not merely not age-appropriate. It is not appropriate in any way at all. I know it’s nearly Halloween, but who or what on earth did Mrs McKeith think she had come as?

Reader, it was at this point I knew I couldn’t do it. It was only 7am in the morning on the second day of half term, and I was a broken woman.

I knew I couldn’t hack it in a tiny, damp, borrowed cottage in the rain without the television and video as mother’s little helper to get through the long hours till the following Monday.

LIZ… A LADY WHO DOESN’T LUNCH

Bikini-clad Liz Hurley, who lives in endless summer and her own-label swimwear, has delighted her legions of drooling fans yet again, this time with this snap of Her Hotness in a hammock in the Maldives during her half-term break.

‘Wondering what’s for lunch,’ she teases us.

Stop it, Liz! With abs as taut as that, we all know what’s for lunch.

We went back home to London. I only tell you this because it’s been half term again – and at long last, more women are coming out of the woodwork to admit they find motherhood lonely and existentially boring.

‘I lost myself,’ Louise Redknapp, wife of former footballer Jamie, who has left the nest, told Hello! ‘It happens to a lot of women when they get married and have children.’

Last week Marina Fogle, wife of adventurer Ben, also confessed she ‘wanted more’ than looking after small children, and said it turned her into ‘a bored mother and a bolshie wife… and more than that, I was lonely’.

For some reason I don’t understand, in the developed world it seems to be only here and in the US that we expect mothers to be so child-centric that they spend every waking minute either with our kids, or in their service.

In Scandinavia there’s a far higher provision of wraparound childcare from the word go. Motherhood is not fetishised as a full-time vocation, and as a result in no other country I can think of is there this regressive cult of – or even words for – the cupcake-baking, ever-smiling, slim and satisfied ‘yummy mummy’.

It is just taken for granted that looking after small children is repetitive, dull and exhausting, and that not all women are completed by this important work alone, and the state must at times play a part. So well done Marina, and Louise, for coming out with it. We can’t say it often and loudly enough.

We love our children, it goes without saying. But if housework, childcare and cleaning were so damnably exciting and fulfilling, men would have elbowed us out of the way years ago.

STUCK IN A SEEDY GROOVE

It’s a tale as old as time. Man falls in love with woman, marries her, the years pass… and then his fancy is caught by a younger woman who looks exactly like his wife did.

I give you Ewan McGregor, who has been getting cosy with American actress Mary Elizabeth Winstead, 32, the very spit of his wife Eve Mavrakis, 51.

Some even repeat this for a third, even fourth time. I give you Billy Joel, 68, who’s been through at least three iterations of model Christie Brinkley and has just had his third daughter by his fourth wife, Alexis.

The Joels have announced that ‘everyone is thrilled’ with the new baby etc. Yeah, right. Not nearly as thrilled, I bet, as they would have been if the old dog had stayed on the family porch in the first place.

➤➤ I literally have no words for this photograph of telly nutritionist Gillian McKeith at a premiere in London last week. It is not merely not age-appropriate. It is not appropriate in any way at all. I know it’s nearly Halloween, but who or what on earth did Mrs McKeith think she had come as?

➤➤ Much squirming at the news that George Bush Snr has had to apologise to women who have called him out for ‘sexual assault’.

Now, Cate Blanchett, the actress, is something of a self-appointed authority on the Weinstein era and what constitutes abuse.

She says: ‘Any man in a position of power or authority who thinks it’s his prerogative to threaten, intimidate or sexually assault any woman he encounters or works alongside needs to be called to account.’

Well, on this basis I find Mr Bush, aged 93, innocent of ‘sexual assault’. He’s been wheelchair-bound for five years. Yes, he’d admitted he goes a bit Benny Hill during photo opps, but this should not be a hanging offence for a disabled President in his tenth decade.