If romaine killed as many as e-cigs have, it would be pulled from stores, mom tells Congress

The mother of an Illinois teenager who fell ill from vaping slammed Congress for failing to issue a nationwide ban on vaping products.

Ruby Johnson, from New Lennox, testified before the House Committee on Oversight and Reform on Tuesday as the number of lung illnesses and deaths related to vaping continues to increase.

As of Wednesday morning, at least 530 people – mostly young adults – across 38 states have been sickened or hospitalized with lung diseases linked to vaping.

One of them is Johnson’s 18-year-old daughter, Piper, who was hospitalized last month with respiratory problems linked to e-cigarettes.

‘These products flooded the market without anyone knowing how they would cause damage and now we’re trying to clean up a mess that involves a cocktail of mystery toxins in the proprietary flavors,’ Johnson testified.

‘People continue to get sick, and teens continue to vape. If this was romaine lettuce, the shelves would be empty,’ referencing the E. coli outbreaks that sickened 272 last year – almost twice as many as have fallen ill from e-cigarettes.

Ruby Johnson, from New Lennox, Illinois, testified before Congress on Tuesday (pictured) after her daughter, Piper, was hospitalized last month with respiratory problems from e-cigarettes 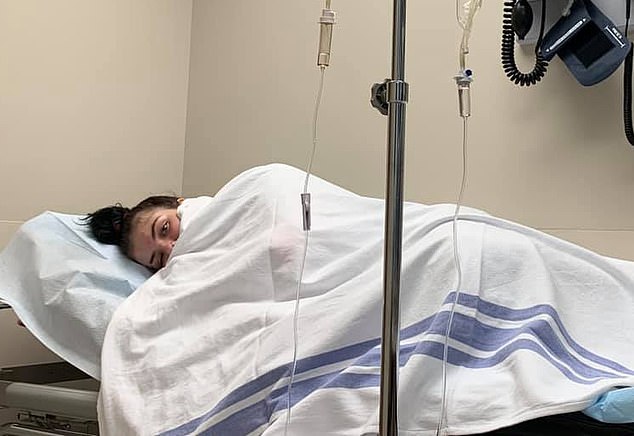 Piper 18, complained of struggling to breathe in August while her parents were driving her to college. Pictured: Piper in the hospital

Late last fall, 62 people in 16 states contracted E. coli after eating romaine lettuce, which led the US Food and Drug Administration (FDA) to warn people to avoid romaine ahead of Thanksgiving.

That romaine was later traced to an irrigation canal near a massive cattle lot in Arizona; the fall outbreak was linked to a water reservoir in California. In both cases, regulators never confirmed how the water became contaminated.

By comparison, nine people in seven states have died after using e-cigarettes in the last year.

More than half the 530 cases of severe lung disease have occurred in people under age 25.

The FDA issues recalls for products it regulates, such as romaine lettuce. While it has had a chance to regulate e-cigarettes, it cannot do more than issue warnings against their use.

Johnson told Congress that Piper’s health problems emerged while driving her to start her freshman year of college at Northern Colorado University.

Shortly into the drive, the 18-year-old started coughing and told her parents that it hurt to take deep breaths, according to a Facebook post.

They took Piper into an urgent care clinic, where doctors diagnosed her with an ‘early pneumonia’, but advised her to go the ER the next day.

At the hospital, she was diagnosed with diffuse pneumonia, meaning it had spread to both lungs.

Doctors told Piper’s parents that if she had been brought to the hospital a day or two later, she would have likely been on a ventilator. 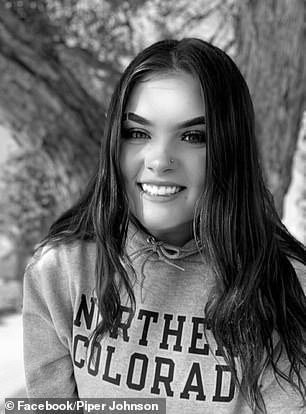 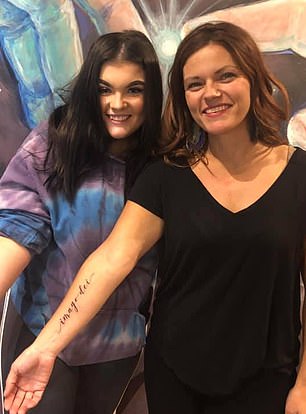 Her parents took her to an urgent care clinic, which referred her to a hospital. Piper was hospitalized with diffused pneumonia, which doctors linked to her use of e-cigarettes. Pictured: Piper, left, and with her mother, right 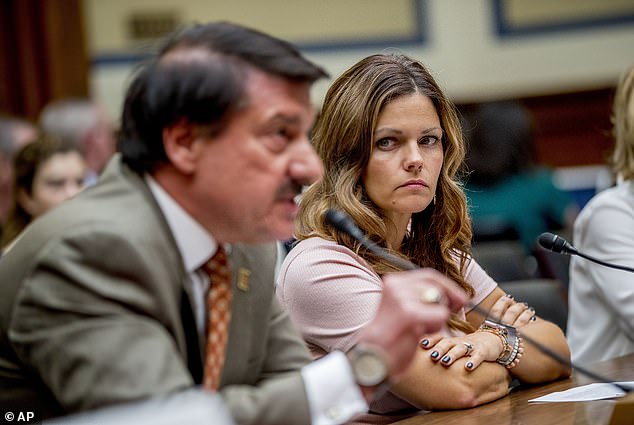 Her mother called for a ban on vaping products and said if the culprit in the outbreak was ‘romaine lettuce’, it would already be banned. Pictured: Johnson, right, listens as American Lung Association Chief Medical Officer Dr Albert Rizzo, left, testifies on Tuesday

She said her daughter had vaped THC – the main psychoactive compound in marijuana – but was mainly using nicotine e-cigarettes such as Juul in the weeks before she became sick.

Use of e-cigarettes has surged since they were introduced to the US marketplace in 2007, according to the Centers for Disease Control and Prevention (CDC).

And they continue to be the most used tobacco product among US teens.

A 2017 report from the US Surgeon General found a 900 percent increase in e-cigarette use among young people between 2011 and 2015.

It is estimated that this equates to around three million high school students.

‘We desperately need our legislators to help us by banning the flavors that have drawn in youth like my daughter – including mint and menthol,’ Johnson said.

‘What happened to my daughter was indicative of this outbreak but points to the bigger crisis- our kids are being hooked by flavors…The FDA has allowed these markets to proliferate, flourish and remain for purchase and consumption -without pre-market review.’