IGA staff leave a blunt note explaining why the store is charging $3.47 for rolls of toilet paper

IGA staff leave a VERY blunt note explaining why the store is charging $3.47 for single rolls of toilet paper

An IGA store left a blunt note revealing why they were charging $3.47 for a single roll of toilet paper.

Customer Colin Ahearn shared a picture of the explanatory note attached to the toilet paper section of Corfield IGA in Perth.

The sign read: ‘This is our cost price on this product as we are shocked how much we were being charged.’

An IGA store in Western Australia left note (pictured) explaining they were charging $3.47 for a single roll of toilet paper because their supplier had increased the price 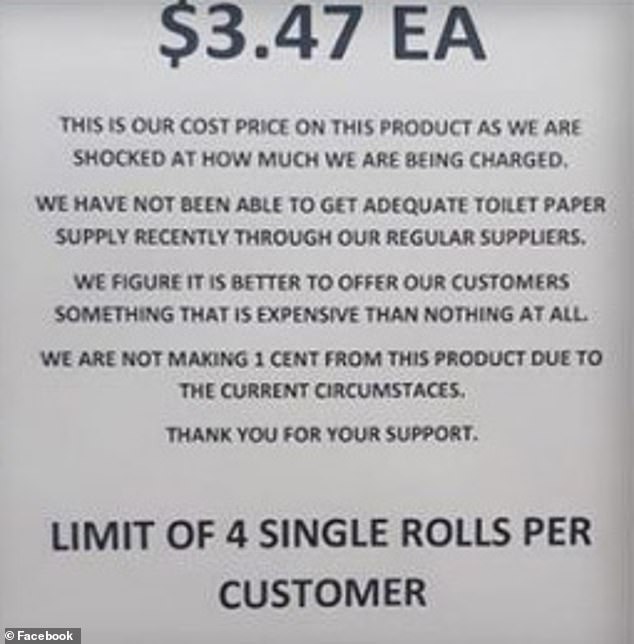 The store explained they were forced to increase their toilet paper prices as they were having trouble with their supplier.

‘We have not been able to get adequate toilet paper supply recently through our regular suppliers,’ the note read.

The IGA store said they decided to forego their profits in order to provide customers with toilet paper.

‘We figure it is better to offer our customers something that is expensive than nothing at all.

‘We are not making one cent from this product due to the current circumstances,’ the note explained.

A notice at the bottom said there was a limit of four single rolls per customer.

Mr Ahearn said he was taken aback when he saw the price of the rolls.

‘Our local IGA do a great job. The reason I took the picture was purely the price, I have to say I was shocked.’

‘My frustration was certainly geared towards the wholesalers versus our local store,’ he explained.

He noted the store had provided free items such as potatoes, mince and milk to pensioners and Centrelink card holders in the last week.

Facebook commenters said they had seen similar high prices for single loo rolls at other stores.

One user wrote: ‘Our IGA were selling two rolls in a plastic bag for $3.50 about three weeks ago.’ 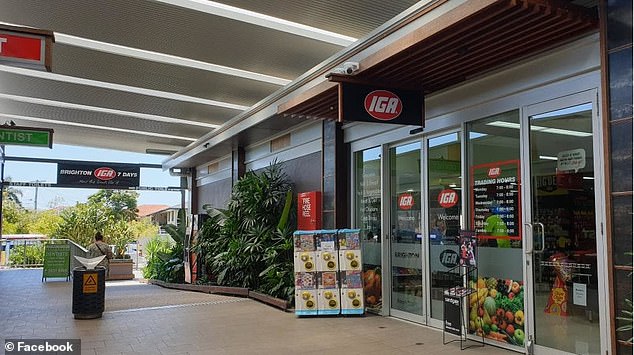 An IGA in Brighton, Brisbane (pictured) separated 24 packs of toilet paper into four packs  to allow more customers to buy the products

Another commenter said: ‘It’s criminal! Good on IGA for doing their best to get toilet paper.’

Users also questioned the high mark up that was made by the supplier.

A commenter wrote: ‘Who is the supplier. That is disgusting. Needs to be reported to your local MP. This is called profiteering!’

Another IGA supermarket owner has been forced to defend separating 24 and 48 packs of toilet paper into four packs.

Kerry Sheaff owns the IGA store in Brighton in northern Brisbane and has been running low on supply since the outbreak began.

‘We had a customer complain about the way we are selling toilet paper in lots of four, they said we were stockpiling,’ Mr Sheaff said on the store’s Facebook page.

The owner explained the rolls were separated so more customers could buy the highly sought after product.

‘The reason we are doing this is because on our deliveries we are receiving 24 and 48 packs. If we put these on the shelf and sell them then that only looks after one household.

‘If we split them into four packs then we can allow a lot more customers to get toilet paper,’ she said.

Mr Sheaff said the store was ‘doing their best’ and urged anyone with issues to shop elsewhere.

It comes after supermarket shelves were stripped bare of toilet paper and other products by panic buyers.

Grocery stores across the country have been forced to introduce restrictions on products to ensure every customer could get what they needed. 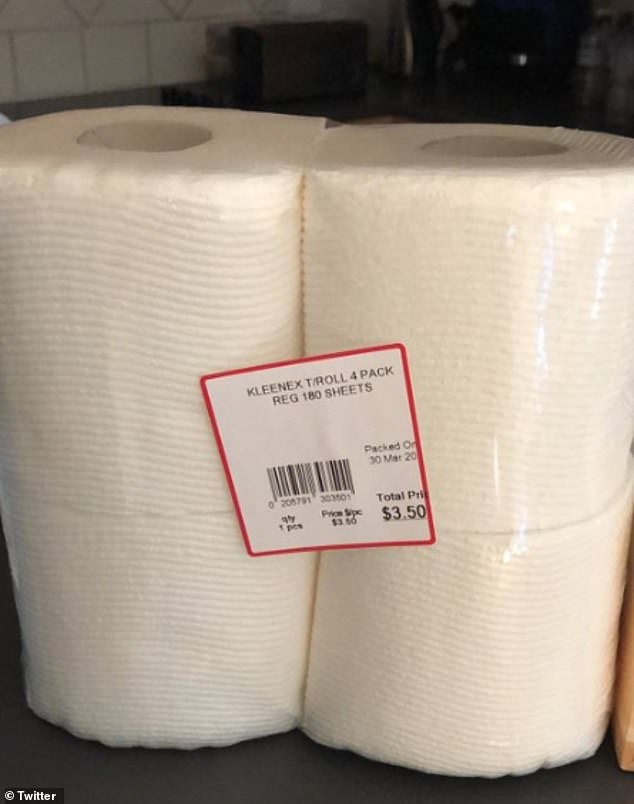