Iggy Azalea has been pictured standing beside an ambulance while her back up dancer was cared for after suffering a seizure on stage.

The Australian rapper was spotted looking on as emergency personnel tended to the young woman following the performance in Brazil.

The scary event happened on Thursday while Iggy performed her song Black Widow, with the singer saying she initially kept performing and requested a medic to the stage, not realizing the severity of the situation.

The incident: Iggy Azalea looked on next to an ambulance as her back up dancer was cared for by a medical team in Brazil after suffering a seizure on stage during a performance

The back up dancer could be seen shaking on the ground as other dancers rushed to her side.

After the incident, emergency services were called and the rapper was spotted off to one side as a hoard of professionals cared for the dancer.

Crew members and fellow dancers were also spotted on hand as the young woman received medical attention. The name of the dancer is unknown.

In the background of the shot, a crowd of concert goers looked on from their seats. 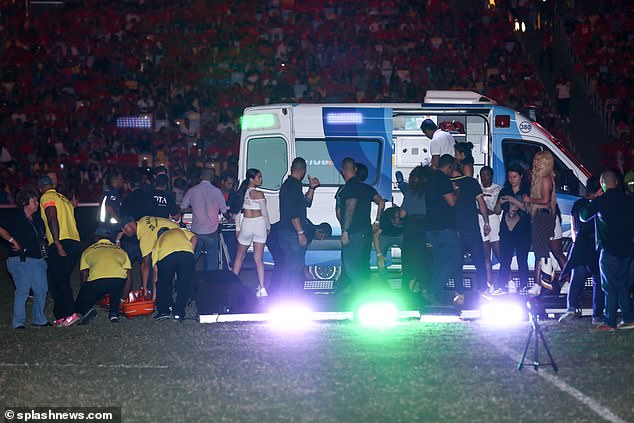 The scene: Medical personnel were on the scene following the scary incident 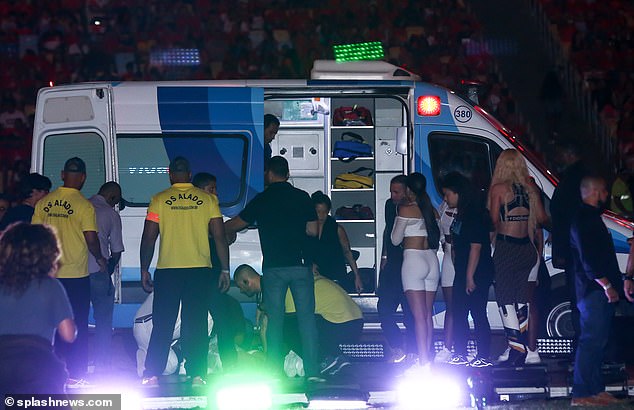 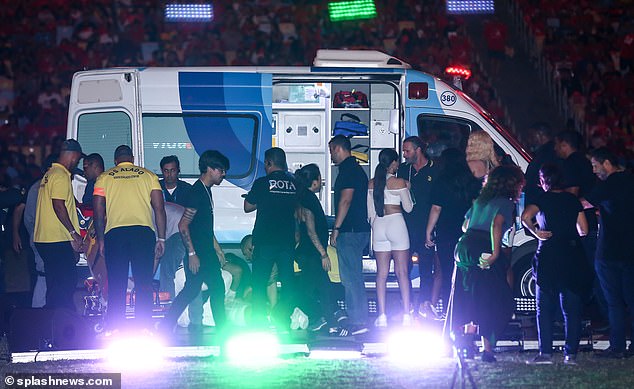 Huddled: The group gathered together beside the emergency vehicle 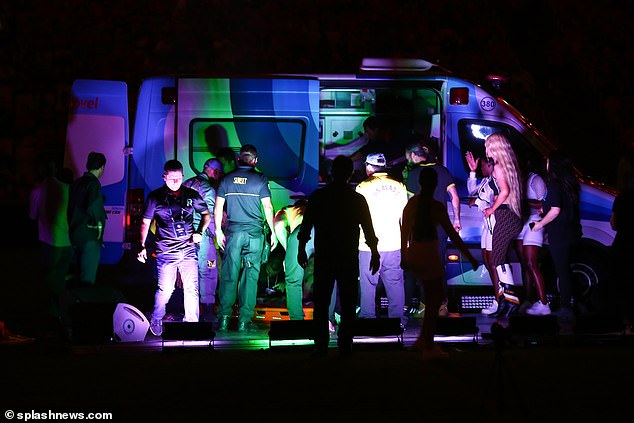 Taking care: Azalea watched on as the scene unfolded 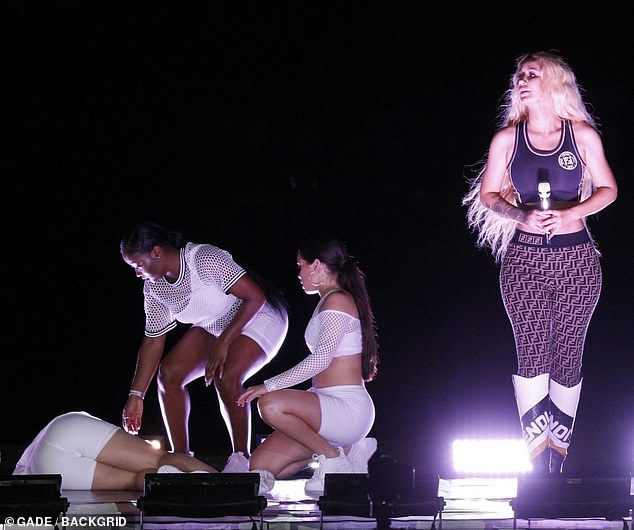 Scary: Iggy kept singing as the dancer went down during the song Black Widow

Following the harrowing incident, the Fancy singer was slammed for continuing her performance on stage despite noticing her backup dancer had collapsed on the floor and began suffering a seizure.

And on Friday, Iggy cut a solitary figure as she shared her first post on Instagram since the shocking incident.

Posing by the ocean in her activewear, the hit-maker shared ‘I love Brazil’, but some fans were not willing to share the love back.

Explanations: Iggy initially kept performing and requested a medic to the stage, not realizing the severity of the situation.

Iggy was blasted by fans after her seemingly callous reaction to continuing on with her show when the dancer collapsed to the floor and suffered a seizure.

While Iggy appeared to pose solo on a ledge by the seaside, her dancers were spotted enjoying a fun-filled day at the beach – seemingly without her.

While a flood of support came in for the 28-year-old songstress under her post, some fans were still angered by what they had seen. 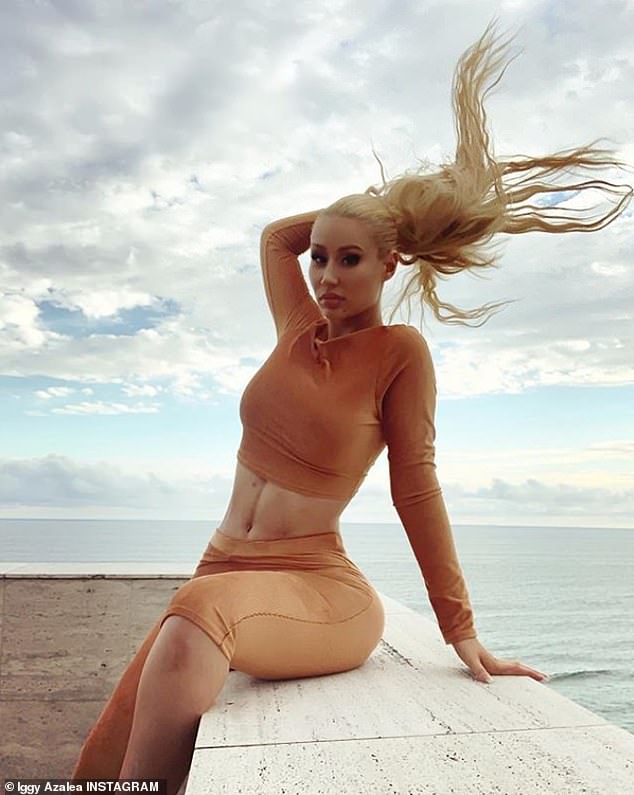 Life’s a beach! Iggy Azalea shares first post since fan backlash in Brazil for singing while her backup dancer had seizure onstage… as her crew are spotted by the sea without her

Iggy was labelled ‘horrible’, ‘irrelevant’ and a ‘bad person’ in comments on her feed, while other fans pleaded for her to show more love to her dancers and asked for more details about the dancer’s wellbeing.

Following the incident, Iggy took to Instagram to reassure her fans that the dancer was in fact going to be alright.

‘Hey guys, Just want to let everyone asking know my dancer is OKAY! The lights & heat caused her to have a seizure,’ she explained, before stating that ‘she is backstage feeling much better’. 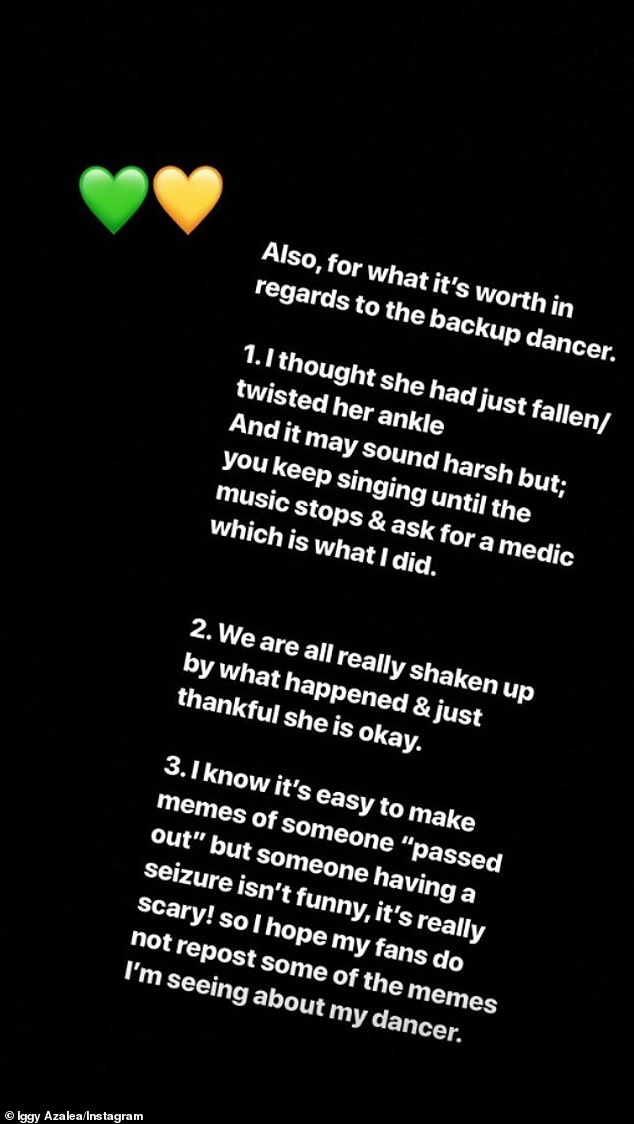 ‘It may sound harsh, but you keep singing until the music stops’: Iggy claimed she thought the dancer had only ‘twisted her ankle’ and kept singing as per usual until help arrived

The Pretty Girls singer also used the social media site to clear up some misconceptions that arose from the incident.

‘I thought she had just fallen/twisted her ankle,’ the Trouble singer said. ‘And it may sound harsh but; you keep singing until the music stops and ask for a medic which is what I did.’

Iggy went on to say her camp were ‘really shaken up by what happened’ and later claimed she personally felt the backlash from the incident had made her feel ‘worn down’ and ‘exhausted by the world’. 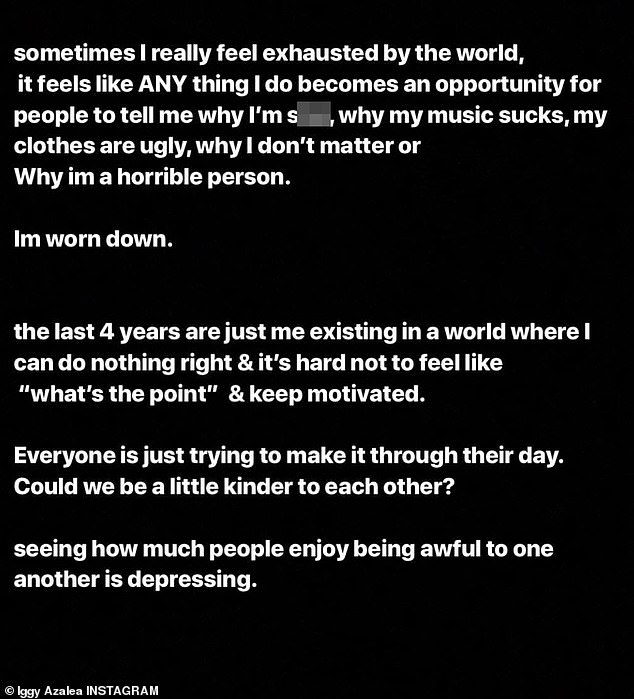 ‘I’m worn down’: Iggy later shared a post to Instagram explaining she personally felt the backlash from the incident had made her feel ‘exhausted by the world’