IKEA in Atlanta is under fire after its management team devised a ‘racially insensitive’ menu for Juneteenth which featured fried chicken and watermelon.

Bosses purportedly sent out the menu to employees in an email last Friday, saying they wanted to serve the foods to customers as a way to ‘honor’ the federal holiday.

However, the management team – which allegedly featured no black employees – failed to realize that many of the food items have been derogatorily associated with black Americans for more than a century.

According to NPR, both fried chicken and watermelon were common foods fed to slaves in the South, and have been ‘a mainstay in racist depictions of black Americans’ ever since they featured in the 1915 film Birth of A Nation.

‘It’s [also] food you eat with your hands, and therefore [it was considered] dirty,’ University of Missouri professor Claire Schmidt explained to the publication about the origins of the racist trope.

‘Table manners were a way of determining who was worthy of respect or not.’

Dozens of disgruntled employees at the Atlanta called out of work on Juneteenth, angered by the menu.

‘It caused a lot of people to be upset. People actually wanted to quit, people weren’t coming back to work,’ one anonymous worker told CBS46 on Monday.

Other items on the menu included collard greens and mac ‘n’ cheese. 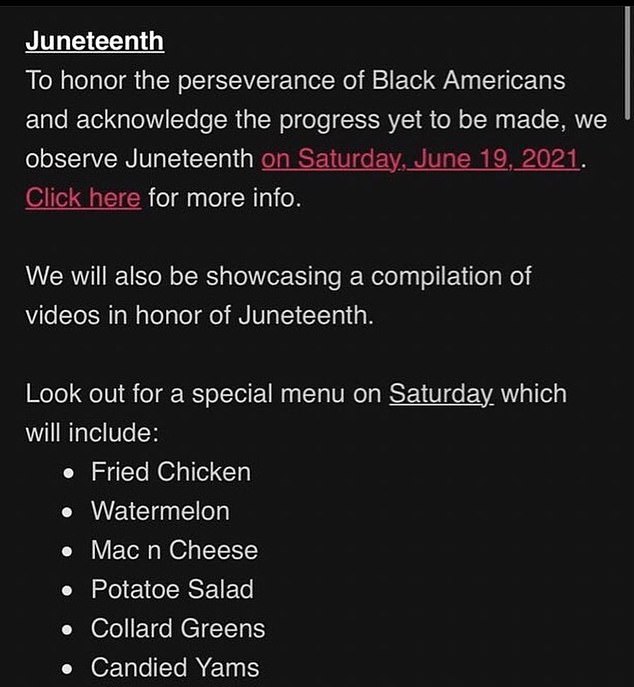 Bosses purportedly sent out the menu to employees in an email last Friday, saying they wanted to serve the foods to customers as a way to ‘honor’ the federal holiday

On Saturday, one manager sent out an email to staff apologizing for their insensitivity.

‘I truly apologize if the menu came off as subjective. It was created with the best of intentions… We value your voice and feedback and have changed the menu so all can enjoy this day,’ they wrote.

However, some staff say it is still not good enough, and have urged managers to become more educated.

‘You cannot say serving watermelon on Juneteenth is a soul food menu when you don’t even know the history, ‘ another anonymous employee told CBS

‘They used to feed slaves watermelon during the slave time.’

On Twitter, others concurred, including actor Iman Crossman who wrote: ‘Who thought this was a good idea? IN ATLANTA’.

Another chimed in: ‘C’mon man, stick to those yummy Swedish meatballs’.