Ilhan Omar said Sunday morning that violent protests all over the country need to come to an end as demonstrators took to the streets to protest race injustices in the wake of the killing of George Floyd.

‘The unrest we are seeing in our nation isn’t just because of the life that was taken. It’s also because so many people have experienced this,’ Omar said on ABC News’ This Week.

‘People are sick and tired of being sick and tired. And we need to really step back and say to ourselves, where do we actually from here?’ she continued, adding that much of the destruction is not coming from those who care about the Black Lives Matter movement.

New York Congresswoman Alexandria Ocasio-Cortez, part of the so-called squad, which includes her, Omar, Ayanna Pressley and Rashida Tlaib, appeared to strike a different tone on Saturday night when she condemned her city’s mayor’s comments regarding the riots as ‘unacceptable.’

New York City Mayor Bill de Blasio on Saturday defended officers in the city dealing with riots after video footage emerged of one running their police cruiser through a crowd of violent protesters.

Representative Ilhan Omar, whose district include all of Minneapolis, called on Sunday for the violent protests across the country to cease – claiming those causing the arson, looting and violence are not doing so in the interest of the Black Lives Matter movement 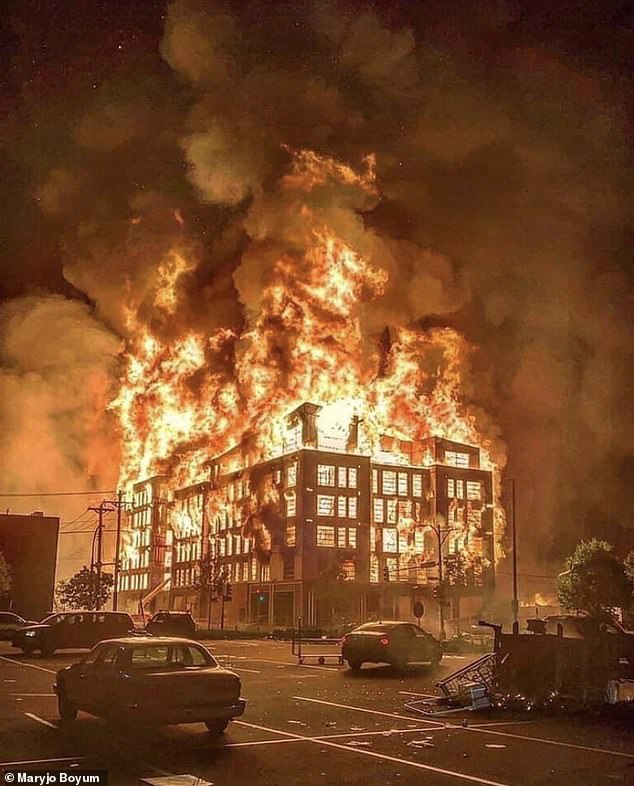 The violent riots broke out across the country in the wake of the killing of George Floyd, a black man who suffocated while being pinned down by four police officers during an arrest in Minneapolis, Minnesota 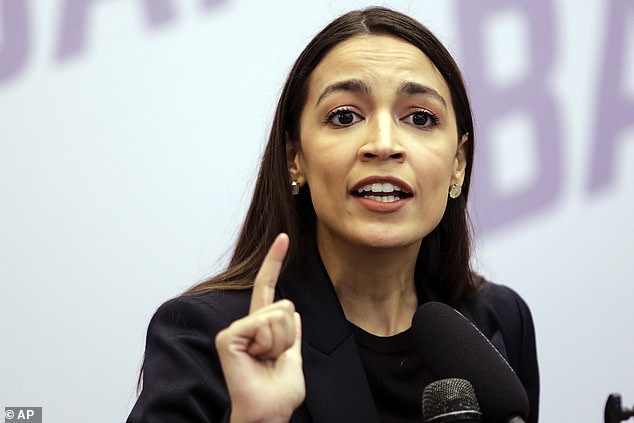 Alexandria Ocasio-Cortez, who represents part of The Bronx and Queens in the House, also weighed in on the events, condemning Mayor Bill de Blasio for defending law enforcement who ran through a crowd of violent demonstrators with a police cruiser 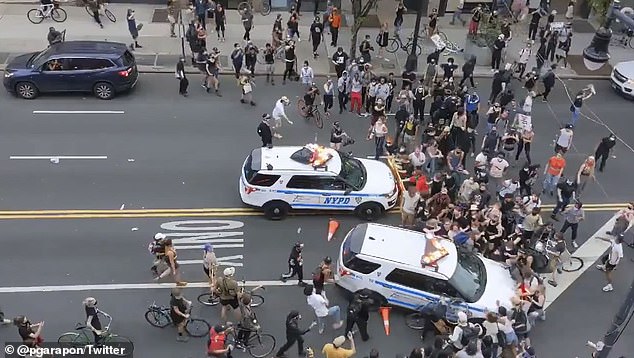 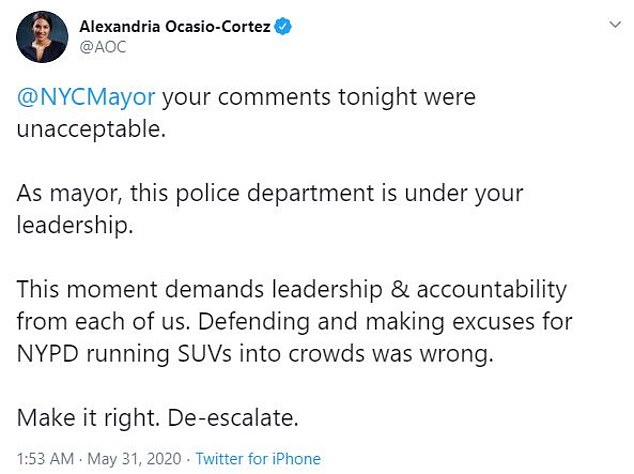 He said an investigation into the incident is underway, but asserted he won’t blame New york’s finest ‘who are trying to deal with an absolutely impossible situation.’

‘As mayor, this police department is under your leadership,’ she continued. ‘This moment demands leadership & accountability from each of us. Defending and making excuses for NYPD running SUVs into crowds was wrong.’

Omar, a progressive Democratic congresswoman for Minnesota, represents Minneapolis and some of its suburbs in the House of Representatives.

The violent protests in her district broke out this week after video emerged of George Floyd being killed by a white cop during an arrest in Minneapolis.

Floyd was held down by four cops while he was handcuffed and was pinned down at his neck by police officer Derek Chauvin’s knee for longer than eight minutes, cell phone footage of the incident revealed. The victim can be heard telling the officers that he could not breathe.

His death sparked nation-wide outrage leading to a slew of violent protests.

Chauvin, 44, was fired after demonstrators called for him to be reprimanded and arrested – and he was taken into custody on Friday and is being charged for third-degree murder.

The riots, which resulted in looting, arson and violence between protesters and law enforcement, broke out in cities all across the country, not just Minneapolis, including in New York City, Atlanta, Washington D.C., Los Angeles and many more.

Omar, along with others, have insisted that much of the protesters in Minneapolis, and other cities, have come from out of town, or even out of state to participate in violent riots that have caused businesses to shut down as they are burned to the ground and be looted. 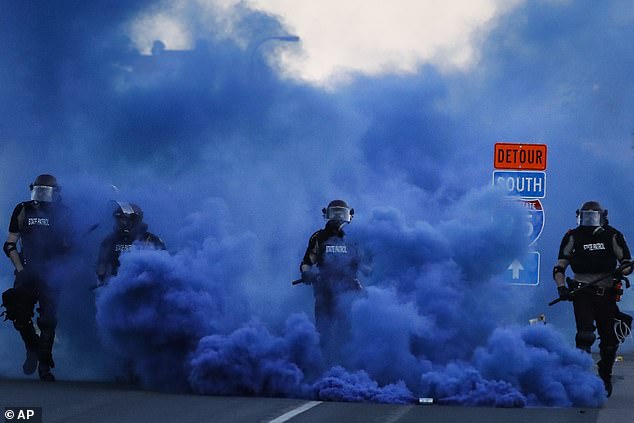 Violent protest broke out in cities all over the country after George Floyd, a black man, was killed during an arrest as four police officers held him down in Minnesota and one, a white officer, had his knee on his neck for more than eight minutes

Omar told ABC’s George Stephanopoulos on Sunday morning that setting fires risks the community that people claim to be standing for.

‘There are people who exploited the pain that communities are feeling and ignite violence,’ she continued.

Part of the riots on Saturday included the police car in New York City running through a group of protesters who refused to move for the car to make its way down the road.

‘Running SUVs in crowds of people should never, ever be normalized. No matter who does it, no matter why,’ Ocasio-Cortez posted in a Twitter thread in the early hours of Sunday morning.

Omar and Pressely, who represents Massachusetts in the House, proposed a resolution on Friday condemning police brutality after Floyd’s death.

‘For too long, Black and brown bodies have been profiled, surveilled, policed, lynched, choked, brutalized and murdered at the hands of police officers,’ Pressley said of the resolution. ‘We cannot allow these fatal injustices to go unchecked any longer.’