‘I’ll smash the f*** out of you’: Anti-masker’s disturbing rant at passenger on a Darwin bus

An anti-masker viciously abused a fellow passenger for following health advice to wear a face covering in front of shocked commuters.

Shocking video showed the woman blast another passenger on a Darwin bus with a stream of profanities for four minutes.

Masks are not mandatory on public in the Northern Territory, including on buses, but health advice across the country recommends it.

The woman threatened the other passenger with violence several times, slurring: ‘I’ll f**king get you off this bus and I’ll smash the f**k outta you.’

‘You’re lucky he’s holding me back,’ she tells the person filming her, referring to the man with her, who has an arm lazily draped across her.

Then again: ‘You’re lucky I’ve got an appointment mate, cos I’d kick your f**king arse as soon as you get off this bus.’

But in truth, the wannabe attacker was less ‘Ronda Rousey’ and more ‘Help Me Rhonda’.

Although she swore 30 times in about three minutes, that was the peak of her powers. 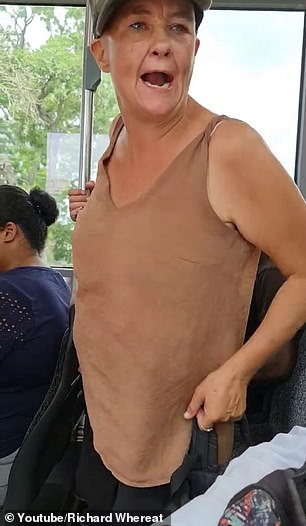 She looked more a danger to herself than anyone else, falling over twice – once in the aisle and again in the gutter after realising she missed her stop and got off the bus.

The person who filmed the sad scene told Daily Mail Australia what prompted the vile outburst.

‘I asked her to stop harassing an old lady who was wearing a mask, with the drunk woman’s constant attempts to get the old lady to take off her mask,’ they said 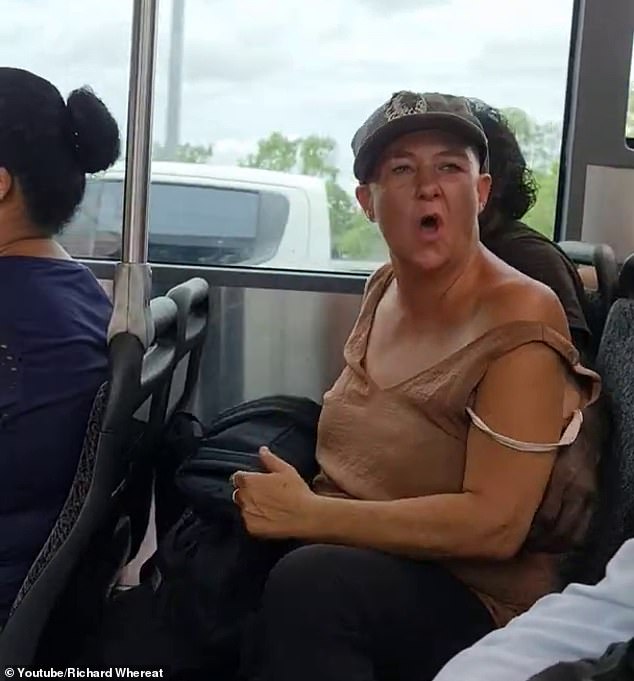 ‘She took offence to that, started getting verbally aggravated, attempted to assault me, and started making threats and asking me if I wanted to fight her.

‘I informed her that I wasn’t going to fight a woman, but she kept threatening to assault me.

‘It was at that point I started recording in case she actually did assault me, so I could have evidence for the police.’

Northern Territory Police told Daily Mail Australia: ‘Without a specific date/time of the incident it will be almost impossible to ascertain any complaints or charges.’