Nine people have been arrested for training dogs to savagely attack black bears which had been trapped using donuts and dog food, and then posting the gruesome maulings on social media.

Florida Attorney General Pam Bondi said Wednesday the seven men and two women were arrested after a year-long investigation conducted by her office and the Florida Fish and Wildlife Conservation Commission.

They now face felony and misdemeanor charges including animal cruelty, illegal taking and baiting of black bear, as well as violations of Florida’s RICO (Rackeeter Influenced and Corrupt Organization) Act. If convicted, they could face up to 30 years in prison.

William Landrum, 39, of Millboro, Virginia, and Mark Lindsey, 26, of Moultrie, Georgia, were also taken into custody in the case. 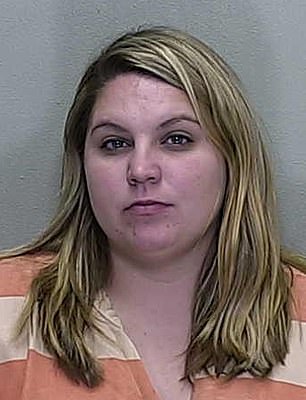 The Florida Attorney General’s office revealed nine people were arrested and accused of training dogs to illegally hunt black bears. Among those taken into custody were husband and wife Dustin and Haley Reddish, of Lake Butler, Florida 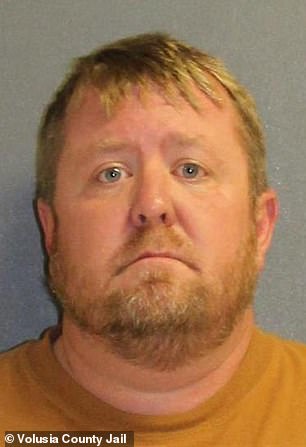 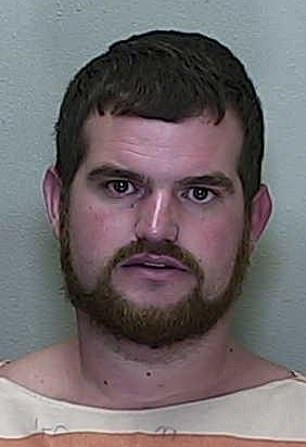 Christopher Elliot Haun, 42 (left), of Ormond Beach, Florida, and William Tyler Wood, 29, of Lake Butler were also taken into custody after the investigation 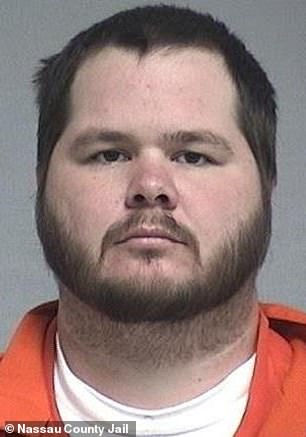 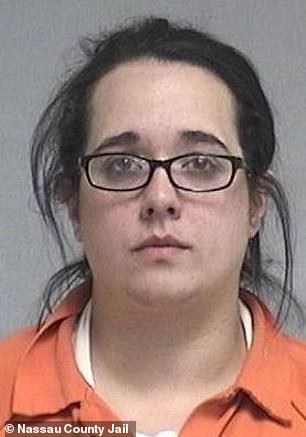 Investigators also seized 53 dogs, although its suspected that ‘a lot more dogs’ were involved in the illegal bear hunting scheme.

During the press conference announcing the arrests, Bondi said the nine people were ‘training dogs to pursue and attack the bears,’ calling it one of the ‘most horrific’ violations she’d ever seen, The Daytona Beach News-Journal reported.

Bondi noted that the accused ‘proudly recorded and posted some of these vicious attacks on Facebook, Instagram and Snachat.’

‘This is not hunting, this is not a sport,’ Bondi went on to say, calling it instead ‘cruelty to animals, the worst of the worst. Of course it was for profit, but I believe it was for their sick pleasure.’

Bear hunting in Florida is currently illegal, although hunts could soon be allowed again as part of a bear population management tool. 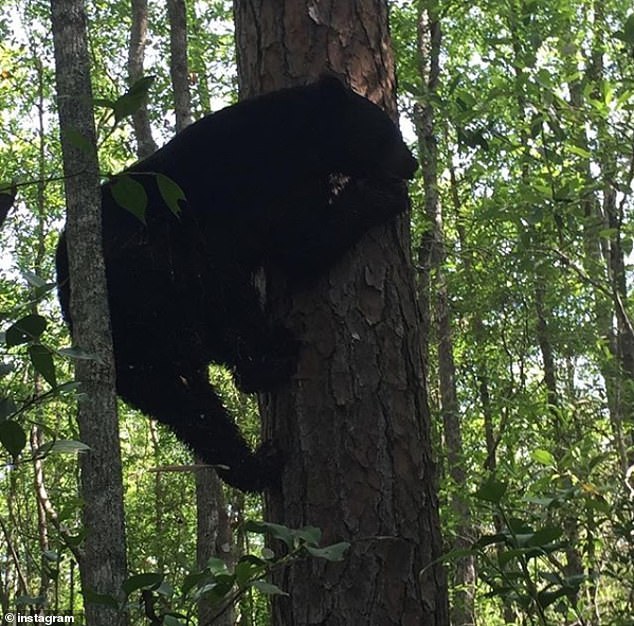 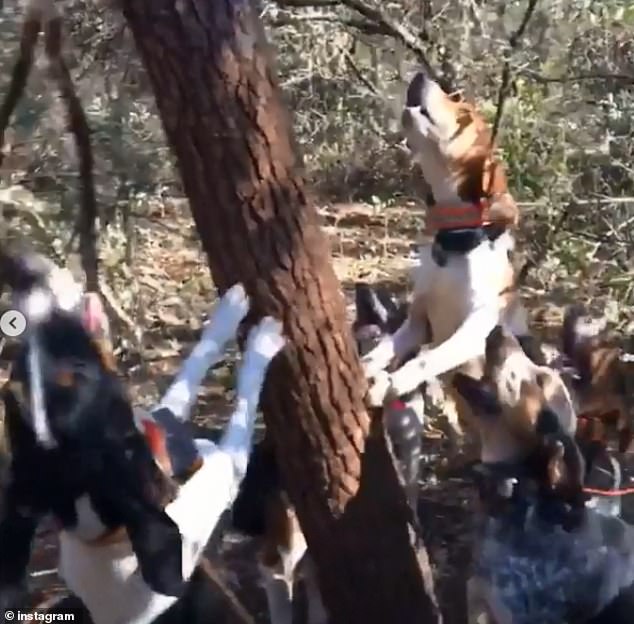 Dustin’s Instagram account is also littered with photos and videos of dogs surrounding trees, barking at the presumed bears that are trapped in the branches 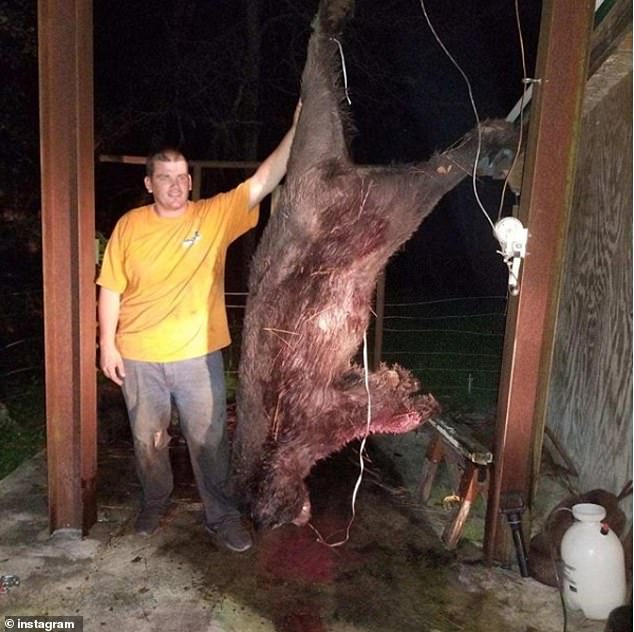 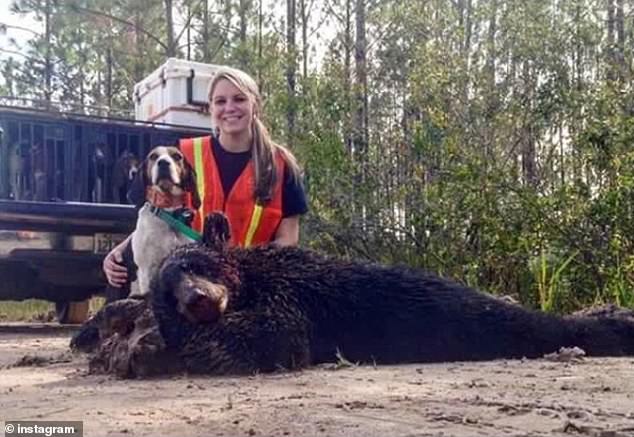 Dustin posted this picture of his wife, Haley Reddish, with a dog and a dead bear in 2016

A 45-page affidavit was filed, documenting multiple violations by the nine people, which occurred on both private and public lands, including Ocala National Forest, in six counties. Investigators reported that they observed some of the accused using dog food, pastries, doughnuts and peanut butter to bait, abuse and kill the bears, in addition to finding two dead bears.

The dog and human foods were said to have been placed in wooded areas for the bears to eat. Then, when the bears showed up, the trained dogs were let loose to chase and maul the bears.

The attacks were videoed by the accused and then posted on social media. The social media posts also included discussions of breeding, selling and training dogs.

Dusty Reddish and Instagram page is filled with pictures of bears clinging to the tops of trees and videos of dogs ferociously barking up and pawing at trees which presumably have bears in them.

On September 19, he posted a night-vision image of a bear, captioned ‘Tomorrow is the day hopefully this fella dies.’ About a week and a half later, on September 30, he posted a photo of himself smiling next to a bloodied, dead bear that is strung up by one leg. 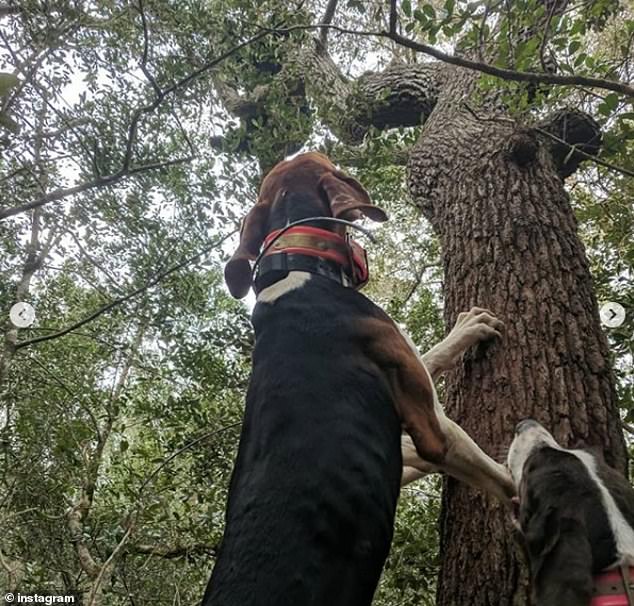 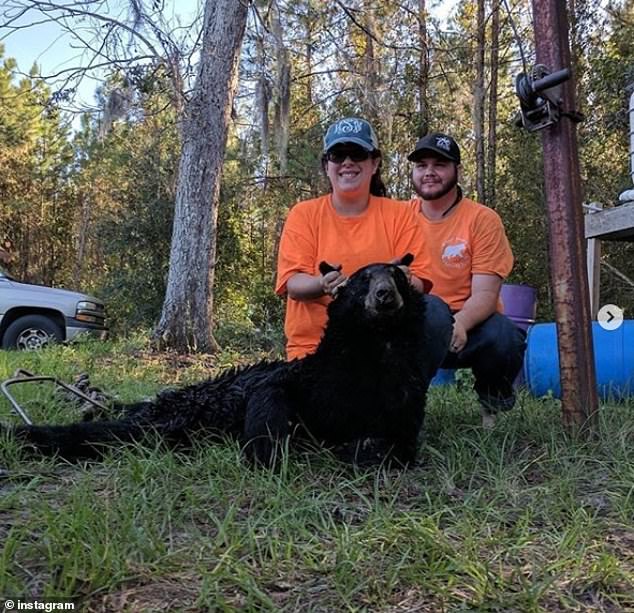 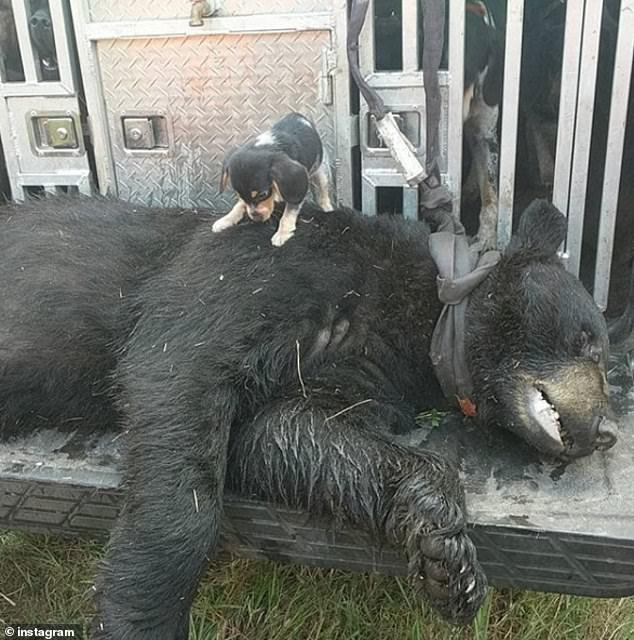 Charles Scarbrough captioned this photo of a puppy and a dead bear: ‘Henry decided he wants to get in on the action now #beardogs’

Charles Luther Scarbrough III — posting under the name Buddy Scarbrough — also filled his Instagram page with pictures of bears on trees and images of his wife, Hannah Weiner Scarbrough, smiling next to bear corpses. Many posts were tagged with the phrase ‘#beardogs’ and ‘#bearhunters.’

Authorities said that the group would monitor the dogs though GPS and use them to track down the bears. The dogs would then chase the bears up into trees, waiting on the ground until the bears jumped or fell, and then would attack them, the Gainesville Sun reported.

One video collected during the investigation allegedly showed the group cheering as dogs attacked a bear that had fallen out of a tree after William Tyler Wood banged a stick against the tree.

Another video, which had been uploaded by Mark Lindsey, according to authorities, showed a bear being mauled by a pack of dogs, at one point having its ears held by dogs, while others bit it.

Troy Travis Starling, meanwhile, was said to have been seen skinning a large bear in a video with an unidentified party.

Investigators also said that they observed Dustin Reddish, Charles Scarbrough and Lindsey stealing donuts from a Krispy Kreme garbage dumpster in Jacksonville, Florida, and putting them in Dustin’s truck.

A few days later, Dustin and wife Haley Reddish were then seen releasing their dogs in an area that had been bated with donuts, pastries and peanut butter. On a different date, Dustin was seen at an different area where decaying donuts and peanut butter were later found in barrels.

‘Not only were these gruesome acts of violence repulsive and cruel, they were recorded and posted to social media for the amusement of the defendants. I doubt they are laughing any longer, now that they have been arrested for serious crimes,’ Bondi said in a statement obtained by the Gainesville Sun.