Dozens of migrants were given coronavirus tests before being detained by the Border Force on entry to the UK today, as 169 people were intercepted trying to cross the English Channel, despite the state of national lockdown.

It is understood 95 people, including nine who identified as children, were taken into the Port of Dover and handed over to immigration officers, after being tested for Covid-19.

Natalie Elphicke, the MP for Dover, has now called for any migrants coming into Kent to be taken straight into quarantine for 14 days.

She said it is ‘not right’ that migrants are reportedly being tested for the virus using British resources – which she believes should instead go to frontline workers. 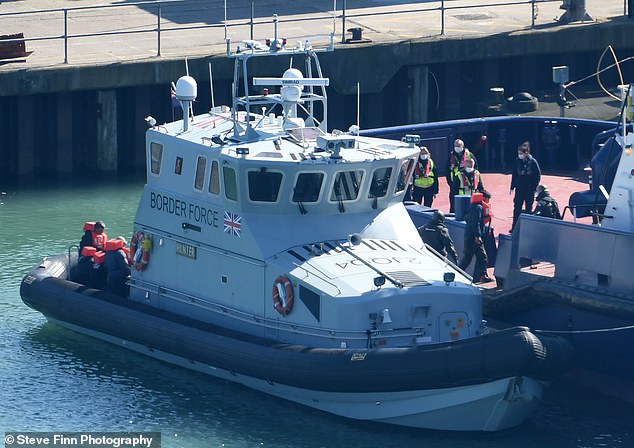 In one of the busiest days for migrant crossings, Border Force dealt with six incidents in the Channel.

As well as the 95 taken to Dover, French authorities have detained ‘around 74’ people, making a total figure of 169 migrants.

At 5.20am, 42 people were found on a single inflatable boat, the Home Office said.

They presented themselves as Iranian and Iraqi nationals.

A spokesman for the Home Office said: ‘All the cases from today will be dealt with according to the immigration rules, with detention used where appropriate.

‘Coronavirus is not having an impact on our operational response to clandestine incidents and we still have the resources to deal with it.’

The other incidents included 10 men presenting as Iraqi and Iranian nationals on a boat at 1am, 13 males who said they were Iranian and Afghan nationals at 2.30am and 11 believed to be from Iraq, Iran and Kuwait at 4am.

A further eight claiming to be Iranian nationals were rescued at 5.30am, with 11 more intercepted at 7.30am,  with those on board presenting themselves as from Iran and Kuwait.

The MP added that the Port of Dover is a vital supply line for the nation which ‘can’t be risked’ and that the migrants should be isolated at other ports upon arrival. 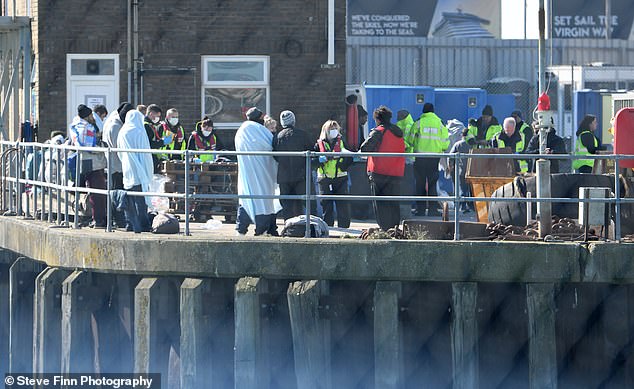 Natalie Elphicke, the MP for Dover, has now called for any migrants coming into Kent to be taken straight into quarantine for 14 days

She said: ‘It’s vital the Home Office and the French authorities take immediate action to stop these illegal crossings.

‘If people break into the country illegally, whether by small boats or lorries, they should be immediately quarantined for 14 days for the protection of our community and our country.

‘There have been reports that illegal migrants are being tested on arrival and then released to the immigration authorities.

‘If so, that’s simply not right. We have a serious shortage of testing kits for frontline nurses and doctors and other key health workers.

‘There is a national need to prioritise and that’s where the testing resources need to go – not on testing illegal entrants. Illegal entrants must be placed into quarantine for 14 days.

‘The Port of Dover, the ferry companies, lorry drivers and other local workers are a key part of the vital supply line of food, medicine and goods.

‘These illegal crossings cannot be allowed to put any part of our national operation at risk.

‘Illegal migrants picked up at sea must be taken to other smaller ports.

‘Now more than ever, we need to put a stop to these illegal crossings across the English Channel.

‘We must protect the nation. We need to be fully focussed on beating the virus at this time.’