Trading standards were so pleased with their seizures of illegal tobacco, worth over £10,000, that they produced a YouTube video.

Sadly for them, the closing shot gave thieves the vital clue they needed to locate the haul, inside a shipping container – and steal it.

The video clearly shows two vehicles parked next to the container, in the distinctive red and yellow livery of Cumbria Fire and Rescue Service.

Clues: A shipping container on the Carlisle estate that thieves worked out contained £10,000 of illegal tobacco

That may have proved to be enough of a hint for thieves cut a 3ft by 2ft hole in the side of the container at Carlisle East Fire Station and make off with the entire haul.

At the time, Cumbria trading standards said the seizure had sent out a clear message that illegal tobacco would not be tolerated in the county.

Their video showed bags full of the cigarettes and tobacco in a shipping container awaiting destruction.

HOW THE ILLEGAL CIGARETTE TRADE COSTS UK AT LEAST £2BN

How many illegal cigarettes are in the UK? Border officials in 2015 said that close to 50 million cigarettes are seized each month – but the overall figure is much higher

What do they cost? Illegal packets of cigarettes can cost between £3 and £4 – less than half the price of legal packs

How much revenue is lost? £2.1 billion was lost between 2014-2015 because of illegal tobacco trade

Of the average pack of fags, how much of the price goes to the government in tax and duty? On a typical pack of 20 cigarettes the total tax burden is £6.17 on typical £7.98 pack

It also illustrated how Mollie, a Border collie cross spaniel, could sniff out the illegal substances and was crucial to the success of the operation.

A spokesman for Cumbria Police said: ‘A burglary occurred at Carlisle East Community Fire Station. A container was broken into and cigarettes were stolen. The value of the tobacco is estimated to be in excess of £10,000.’

A Cumbria County Council spokesman added: ‘I can confirm the cigarettes that were stolen were the ones seized during the Trading Standards and police operation just before Christmas. The container is no longer in use for storage of seized goods.’

Intelligence given to Trading Standards suggested some takeaways and shops in the Carlisle street were potentially selling illegally imported or counterfeit cigarettes and hand-rolling tobacco. 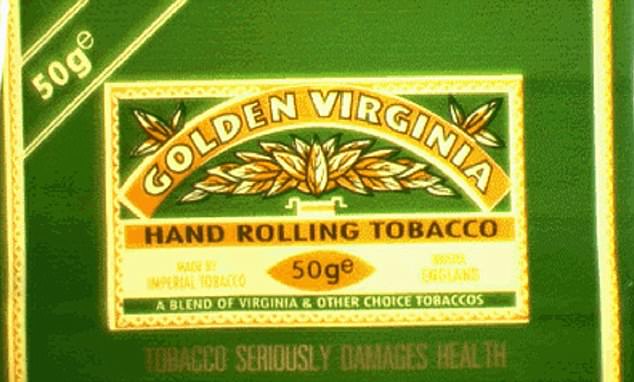 In the last year more than 70,000 counterfeit cigarettes and 1,600 pouches of hand rolling tobacco have been seized from the streets of Cumbria (file picture)

The operation, on 14 December, was deemed to be a success but the haul was lifted sometime between 5.30pm on December 23 and 10.30am on Christmas Eve, sparking a police investigation.

Counterfeit cigarettes are illegally manufactured and sold by a party other than the original trademark or copyright holder.

Trading Standards regularly target illegal tobacco sales across the county. In the last year more than 70,000 counterfeit cigarettes and 1,600 pouches of hand rolling tobacco from the streets of Cumbria.