Illinois is ‘going it alone’ because the White House have made too many ‘promises not delivered’ in its coronavirus testing response, its Governor has said.

Governor JB Pritzker ‘has not been counting on the White House’ to provide a plan for testing, he told CNN‘s State of the Union with Jake Tapper on Sunday.

President Donald Trump has previously indicated the country would be conducting five million COVID-19 tests ‘very soon,’ while the government official in charge of the testing said ‘there is absolutely no way on Earth’ it could happen.

Gov. Pritzker said: ‘I have not been counting on the White House because there have been too many situations in which they’ve made promises not delivered.’

Illinois Gov. J.B. Pritzker on his state’s plan forward: “What we’re doing is we’re going it alone, as the White House has left all the states to do. And we’ve done well spinning up testing. We will continue to grow our testing. We have the ability to do that on our own” #CNNSOTU pic.twitter.com/4Y6n7nTcLa

Governor JB Pritzker ‘has not been counting on the White House’ and is instead planning his state’s individual response to the Covid-19 pandemic, he told CNN ‘s State of the Union with Jake Tapper on Sunday

President Trump has promised to send swabs to Illinois by Sunday, which Gov Pritzer said he was ‘looking forward to’.

‘What we’re doing is we’re going it alone, as the White House has left all the states to do,’ he added.

He added that he plans to ‘eradicate’ the virus by gradually increasing the number of people in the state being tested.

On Friday a new record was reached when 20,671 people were tested for coronavirus in the previous 24-hour period.

Illinois needs to test 64,000 people a day if it wants to safely lift lockdown measures, according to analysis by Harvard Uni and STAT, an online medical publication. 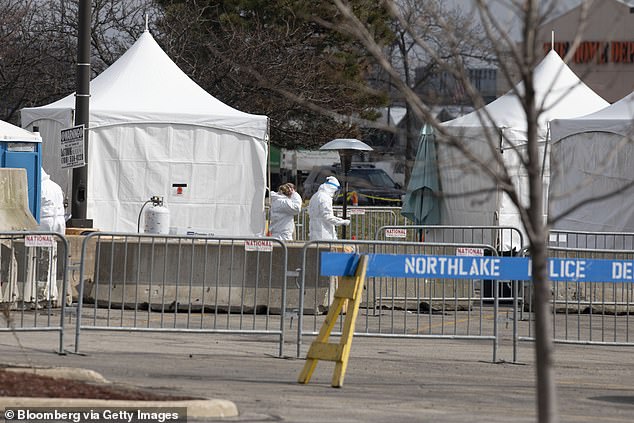 Medical personnel walk between tents at a drive-thru Covid-19 testing location in the parking lot outside a Walmart store in Northlake, Illinois 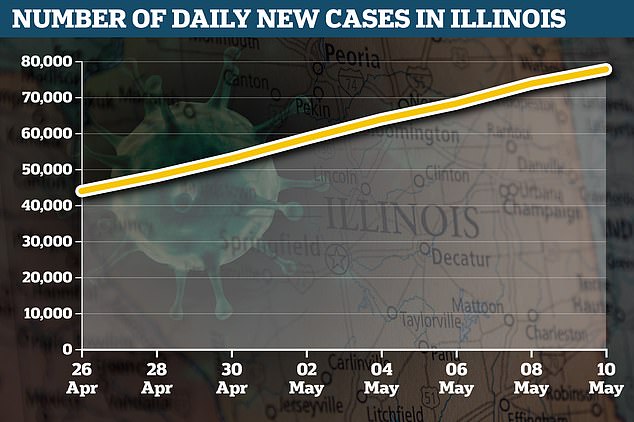 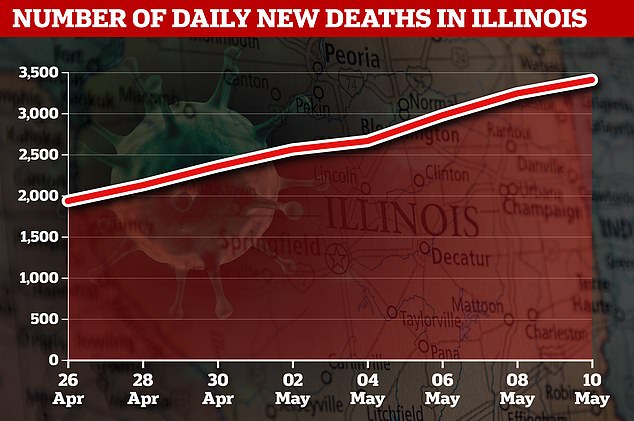 Gov. Pritzker also revealed he would be ‘mimicking one of the great collaborative efforts’ by copying Massachusetts’ contact tracing response.

There have been 77,741 confirmed Covid-19 cases and 3,406 deaths due to the virus since the outbreak began in the state. 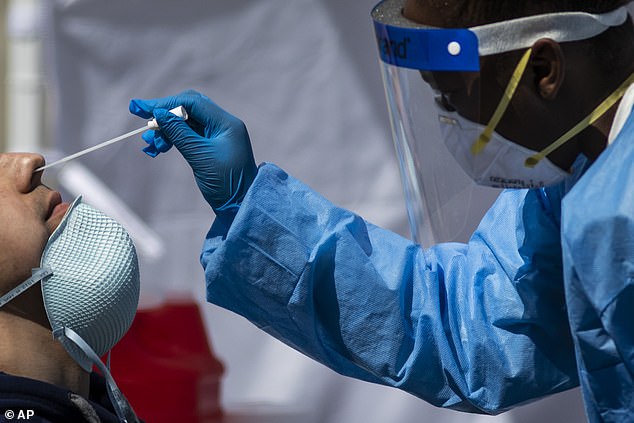 Phlebotomist Crystal Bovan, with Simple Laboratories, collects a nasopharyngeal swab sample to test for the coronavirus for a man at the lab’s drive-thru testing site in the parking lot of St. Rosalie Catholic Parish in Harwood Heights, Chicago, on Friday, May 1

Last month Mr Trump continued to send mixed messages on the country’s COVID-19 testing capabilities, saying a benchmark of five million tests per day was ‘unnecessary,’ but that the country would also hit it ‘pretty easily.’

‘I heard the five million is totally unnecessary, now that doesn’t mean we’re not going to hit it pretty easily – but, again, I think it’s a media trap,’ the president complained to reporters from the Oval Office on Wednesday, April 29.

The five million mark came from the Harvard University study. It said the US needed to be able to carry out at least five million tests a day by early June and ramp that up to 20 million per day by late July in order to reopen the economy.

Admiral Brett Giroir, whose responsible for testing, characterized that assessment as ‘an Ivory Tower, unreasonable benchmark.’

He also said it couldn’t happen with current technology.

NBC News’ Kristen Welker asked the president about the five million figure and mentioned the study.

She mentioned that the administration’s current plan doesn’t increase testing to get to that number. ‘Why not? And can you get to that benchmark?’ 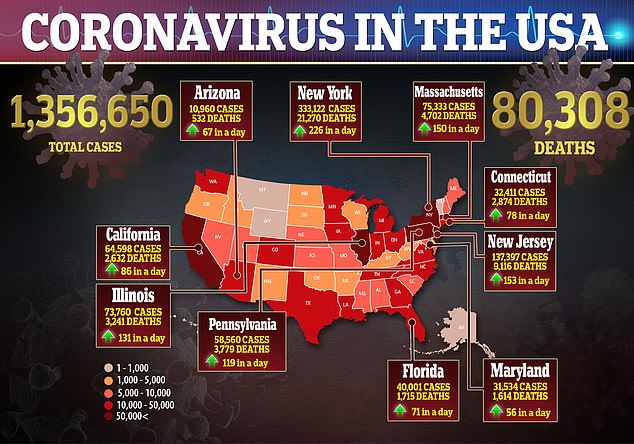 The latest death count stands at 80,308 as of Sunday morning, with more than 1,356,650 infections confirmed across the US 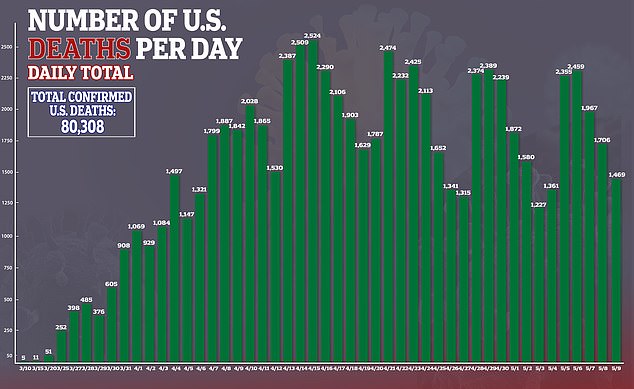 The president then boasted about the country’s testing capabilities.

Welker next asked to clarify if he meant that the country would surpass the five million tests per day mark.

‘Oh, well, we’re going to be there very soon,’ the president responded.

‘If you look at the numbers, it could be that we’re getting very close. I mean, I don’t have the exact numbers. We would’ve had them if you asked me the same question a little while ago because people with the statistics were there,’ he added.

One day later, a reporter quoted his ‘very soon’ comment back to him and asked about meeting the 5 million tests per day goal. 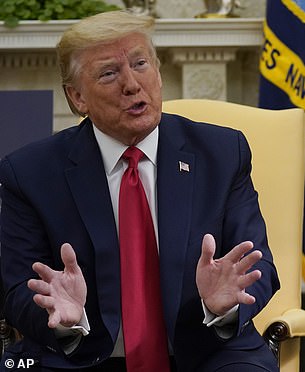 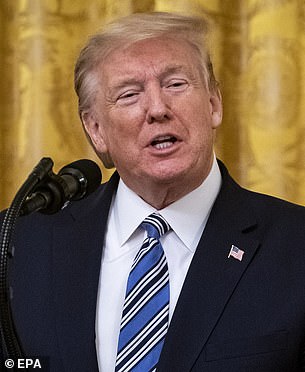 A TALE OF TWO TRUMPS: President Trump said in the Oval Office Wednesday that he ‘didn’t say five million’ a day after he said in the East Room that the U.S. testing capacity ‘very soon’ would get to five million tests per day

‘I’d like to refer to these two people,’ he said, motioning to Drs. Deborah Brix and Anthony Fauci who were seated nearby. ‘Because I don’t know where it came up. Everybody kept saying, you said there’s be five – that was a study that came out, somebody came out with a study of five million people.’

‘We will be there, but I didn’t say it,’ the president added. ‘We are going to be there at a certain point.’

Trump then complained that the demand for greater testing amid the coronavirus pandemic was a ‘media trap’ only meant to catch him. 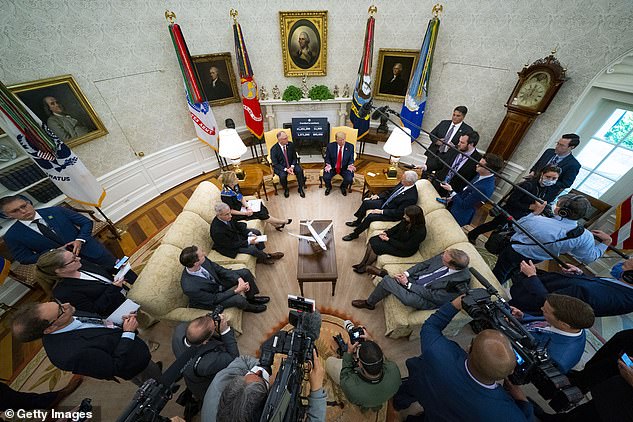 President Trump said he was a victim of a ‘media trap’ when asked about previous boasts he had made about American testing capacity for COVID-19. ‘It pertains to me, it doesn’t pertain to other people, but it’s what I’ve had to experience for five years,’ Trump said

‘In other words, it’s sort of a set-up because no matter what – and by the way when we hit five million, when are we going to hit 10 million,’ he continued.

‘It’s a little bit of a trap – it’s called the media trap – it pertains to me, it doesn’t pertain to other people, but it’s what I’ve had to experience for five years,’ he said.

It comes after Billionaire Gov. Pritzker dodged a question about the whereabouts of his wife during a press conference after it was reported she had left the state to ride out the stay-at-home from their $12.1million Florida equine estate.

Gov. Pritzker refused to answer the question stating his family should not not be brought into politics, slamming the story as ‘reprehensible’ despite his wife M.K. Pritzker having an office in the Illinois Capitol and a full-time staffer.

In contrast, answering the question immediately after about businesses in the state disobeying the stay-at-home order, Pritzker warned that there were many ways they could be punished for reopening too soon.

The report that the first lady had left the state came after the governor extended ‘All Illinois’ stay-at-home order through May 30 and faced several legal challenges for doing so. The stay-at-home order is the second longest in America.

The governor is a member of the Pritzker family who own the Hyatt hotel chain.

Gov. Pritzker was asked a direct question about the whereabouts of his wife Wednesdayy, April 29, by Patch reporter Mark Konkol who had first reported that she may have left the state to go to one of their second homes.

‘What is your response to people who say the stay-at-home order and non-essential travels bans aren’t abided by your family?’ Konkol asked.

‘The first thing I’d like to say is that in politics it used to be that we kept our families out of it,’ said Pritzker. 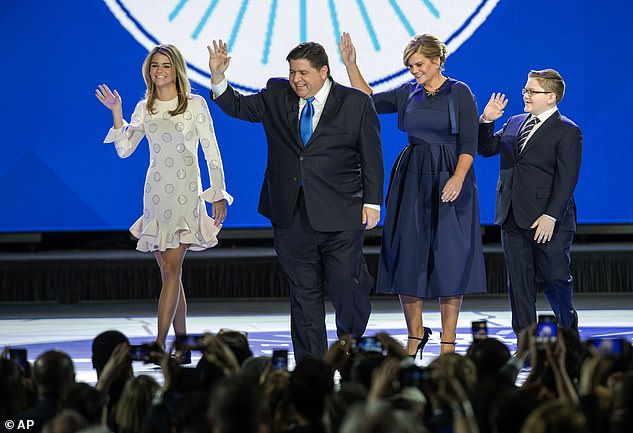 Illinois Gov. J.B. Pritzker with his wife M.K. and their two children. The governor refused to answer a question about whether his wife had gone to Florida despite the stay-at-home order he has now extended in the state until May 30. He called the story ‘reprehensible’

‘My official duties have nothing to do with my family. So, I’m not going to answer that question. It’s inappropriate and I find it reprehensible, honestly that that a reporter wrote a story about it.’

In a follow-up question about parties being held and small businesses opening up in defiance of the order, Gov. Pritzker warned that there were penalties that could be used to ensure that didn’t happen.

‘We have enforcement methods that can be used. Their permits can be taken away, the state can take action, local government can take action,’ he said, urging them to stay closed for the safety of themselves and their patrons.

Gov. Pritzker has received push back on his decision to extend a modified stay-at-home order in the state to May 30 with a church in northwest Illinois filing a federal lawsuit contending that Pritzker’s executive actions have demonstrated ‘illegal and discriminatory hostility to religious practice, churches, and people of faith’. 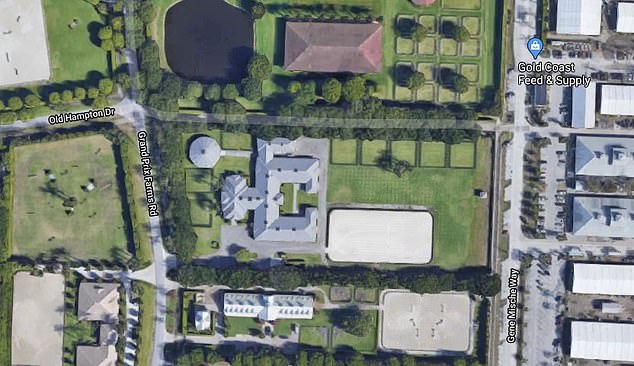 Illinois’ first lady is reported to have traveled to this $12.1million Florida estate the family owns

The modified stay-at-home order came into effect Friday, May 1.

Employees and customers must wear a face covering.

Retail stores may re-open to fulfill telephone and online orders through pick-up outside the store and delivery.

The new order also called for face masks to be worn when in a public place where a six-foot social distance can’t be maintained.

WHAT THE PRESIDENT SAID ABOUT 5 MILLION TESTS

NBC’S KRISTEN WELKER: Thank you, Mr. President. Some health experts say the U.S. needs 5 million tests per day by June in order to safely reopen. You unveiled a plan yesterday that will increase testing, but not by that much. Why not? And can you get to that benchmark?

THE PRESIDENT: Well, it will increase it and it’ll increase it by much more than that in the very near future. We’re way ahead of everyone on testing. We haven’t been given the press – in terms of, I think, fairness of the press – but that’s okay. And that’s why I appreciated the – the statement before by Yahoo.

We are way ahead on testing. We are the best in the world on testing. We’ve tested much more than anybody else, times two — or every country combined. We’ve tested more than every country combined. And they keep talking about South Korea, and I’m very friendly, as you know, with President Moon, who just had a great victory — a new victory — as we’re very happy about. But he will tell you how well the United States has done on testing. And he told me that very strongly. The quality of our tests is the best and the number is the best. Now, with all of that being said, we will be going to an even higher number, and it goes up exponentially.

Now, with that being said, not everybody feels as strongly about testing as others. We have some governors that are very strong on testing. We have other governors, frankly, that aren’t nearly as strong on testing. Their test is much more modest. And their real test is when people stop getting sick, and they’ll be able to do that too. And I understand both systems very well, but we’re going to maximum testing, even though some people won’t even want to use it.

WELKER: Did I hear you saying you’re confident you can surpass 5 million tests per day? Is that –

THE PRESIDENT: Oh, well, we’re going to be there very soon. If you look at the numbers, it could be that we’re getting very close. I mean, I don’t have the exact numbers. We would’ve had them if you asked me the same question a little while ago because people with the statistics were there.