An Illinois homeowner has been forced to remove a Halloween decoration from her front yard that appeared to depict a black man being lynched from a tree.

Toya Griffin, 37, was on the phone with her 15-year-old daughter Wednesday when she says the teen noticed the visual in Lansing, Illinois.

‘My daughter suddenly said, “Oh, my god,” and tried to explain what she saw,’ Griffin, told Yahoo Lifestyle.

Toya Griffin, 37, was on the phone with her 15-year-old daughter Wednesday when she says the teen noticed the visual in Lansing, Illinois 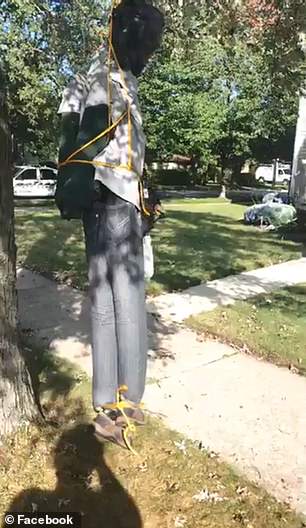 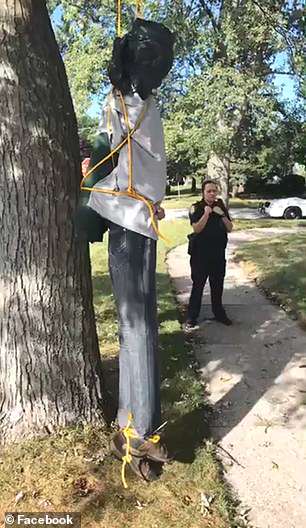 The teen, who is a sophomore at Thornton Fractional South High School, told her mother that she saw a black mannequin with his hands and ankles tied. The figure was hanging in a tree near the sidewalk.

Griffin instructed her daughter to snap a photo and take down the address for the home. The pair noted that the house was decorated for Halloween.

The concerned mother called the Lansing Police Department and an officer was dispatched to the scene.

Returning Griffin’s call, however, the officer said that ‘he doesn’t see anything wrong with it’. 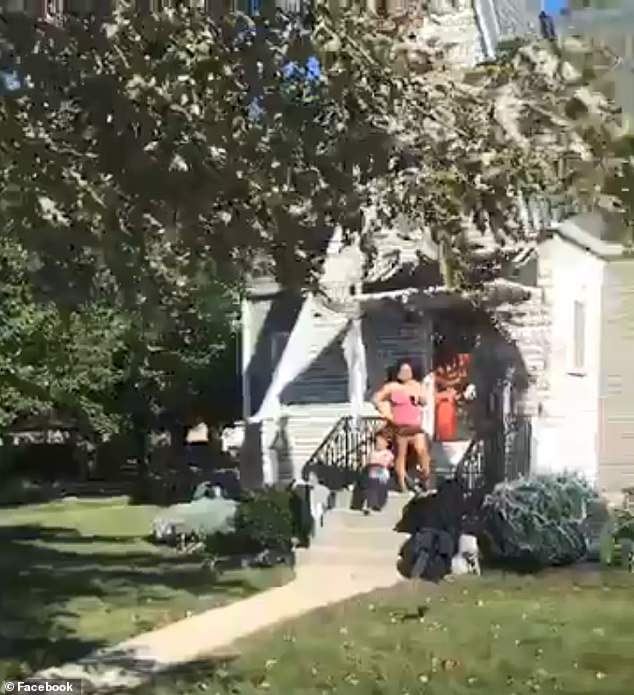 A group of angry neighbors confronted the police and the homeowner, who said that there was a Jason mask on the mannequin that was stolen

Griffin’s sister then went to the tree and a group of irate neighbors gathered at the scene, filming a Facebook Live video.

‘The owner came outside, and my sister asked her, ‘Do you see anything wrong with this?” Griffin added. ‘She refused to take it down and said, ‘I have friends who are black.”

Arriving at the scene a second time, police learned that there was allegedly a Jason mask on the mannequin before ‘somebody stole it’.

‘Once the mask was removed, all that remained on the head was a plain black plastic bag,’ the police said in a statement on Wednesday.

‘It was verified with several neighbors that the mannequin originally had on a Halloween mask. The Halloween decoration has since been taken down.’ 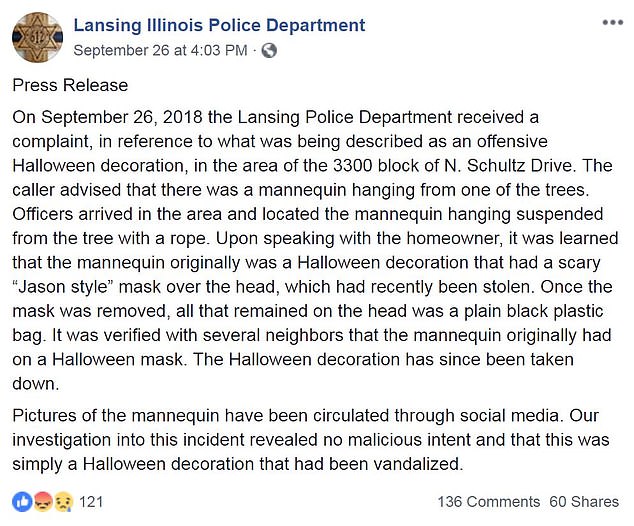 ‘It was verified with several neighbors that the mannequin originally had on a Halloween mask. The Halloween decoration has since been taken down,’ the police said in a statement

Thornton Fractional High School District 215 sent an email to parents, calling the visual ‘disturbing’ and offering counseling services to students who were traumatized by the image.

Griffin’s daughter is still upset with the images and asserts that ‘she’ll be taking a different route.’

‘It took three phone calls, a crowd of neighbors, and a Facebook Live video before this was removed,’ Griffin added.

‘The police are supposed to represent the best interests of the community — which consists largely of African-Americans whose ancestors have a history of being lynched. Slavery and racism affect people every day.’