A massive snowstorm, coupled with winds reaching 70 mph and large 2.5-inch hail stones, hit Illinois on Friday in a ‘freak’ weather system that was expected bring 50 inches of snow to Western Montana and deliver an early winter to states as far as California.

Temperatures in the Midwest were plummeting unusually early this year, with forecasters warning of trees falling to damage power lines, damaging waves on Flathead Lake in Montana, and dangerous travel conditions all the way to the West Coast lasting until Monday.

As a thunderstorm frontal ripped through Illinois, in Chicago, four people had to be rescued from Lake Michigan and high winds hit during a thunderstorm in Manteno, knocking down tents and ruining an Oktoberfest event, ABC News reported.

It came as approximately 70 reports of severe weather emerged from Kansas to Indiana, that latter which was under a flash flood warning as six inches of rain fell in the northwest area Saturday morning.

A video filmed from a home in Mossville, Illinois show the severe weather that came with a travel warning 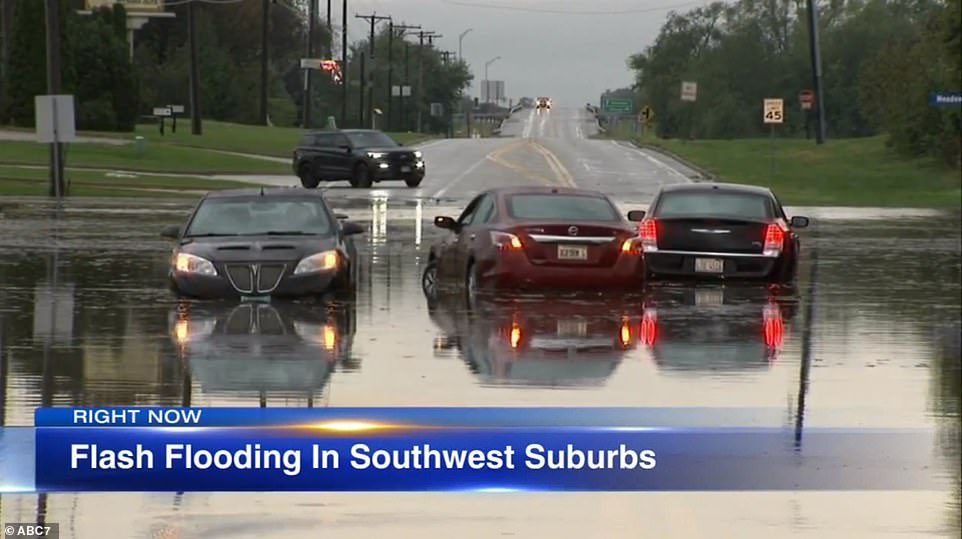 During the wet weather in Chicago, a 20-year-old man was rescued by four firefighters who took a boat to reach him 400 feet out in Lake Michigan near Pratt.

The thunderstorm stopped them from reaching him in a helicopter but the man was eventually taken to hospital to be treated.

‘The waves were high. The water temperature, I believe, was 58 degrees,’ Battalion Chief Frank Cambria told CBS News. ‘We were worried about hypothermia setting in. The victim was just about under water when Capt. Finnegan got to him.’

‘He was in trouble. He was yelling. He was drowning. We went in,’ Captain Michael Finnegan added about himself and colleague and two others stayed on the boat for Friday’s rescue mission.

Three divers were also rescued from the lake in the city where 959 flights had been cancelled at O’Hare Airport and 134 were cancelled at Midway International, while both travel hubs had delays nearing one hour where flights went ahead.

At the same time predictions of a low pressure system causing severe storms in the Northern Rockies caused Kansas and Missouri to brace for tornadoes and other harsh storm behavior.

The strange September weather is caused by cold air from Canada dragging west from the Rocky Mountains, where residents were warned to brace for crop damage and treacherous roadways. 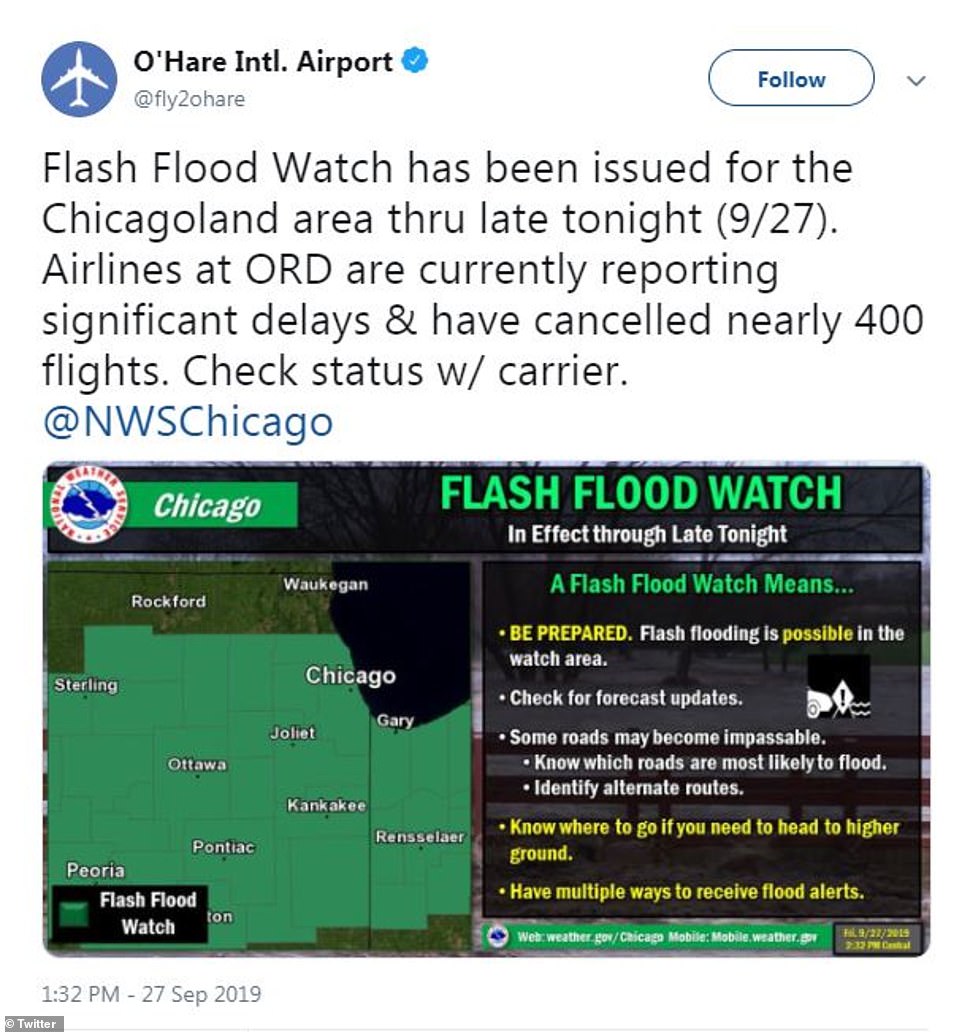 Flights cancelled between Chicago O’Hare and Midway International together reached more than 1,000 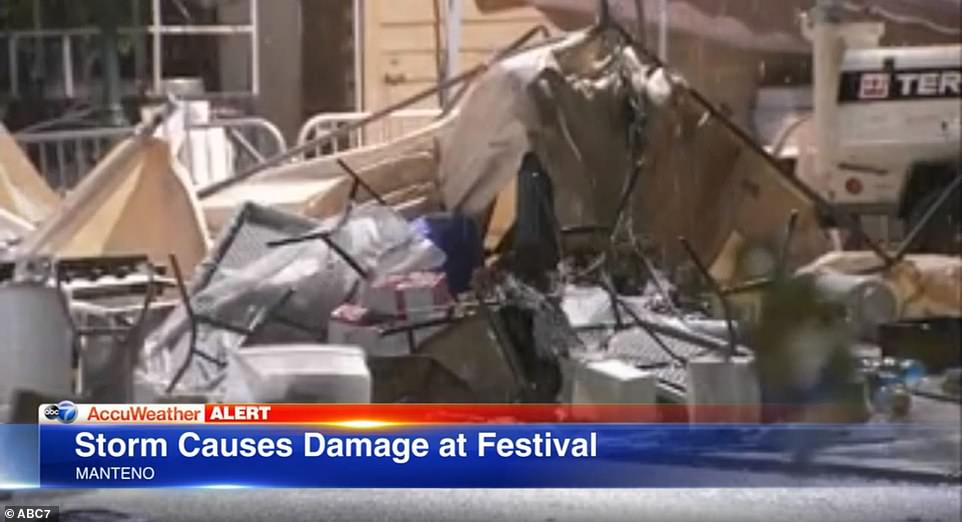 High winds hit during a thunderstorm in Manteno, Illinois, knocking down tents and ruining an Oktoberfest event

In Missoula, Montana, which has not received snow in September since 1983, state Department of Transportation officials were preparing snowplows and sanding trucks and putting up ‘watch for ice on bridge’ signs, maintenance chief Steve Felix told the Missoulian.

The warm roadbeds will probably melt most of the snow during the weekend, Felix said, but the cold temperatures forecast for Monday could create black ice while drivers likely haven’t put on their snow tires yet.

‘I’m concerned people will not be ready for this,’ he said. ‘They shouldn’t take this storm lightly.’

While up to four feet of snow could cover the Rocky Mountain Front and Glacier National Park in Montana, northern and central parts of the state are more likely to receive 6-12 inches.

If snowfall does occur in Missoula over the weekend, it could very well lead to a record-setting event, according to AccuWeather, as the greatest single-day September snowfall in the Missoula Valley was just 1.5 inches in 1934.

‘It’s Montana, and this is kind of the characteristic of Montana, freak snowstorms. Our seasons are short except for winter,’ Rebecca Connors, public information officer for the City of Helena Public Works, told AccuWeather. 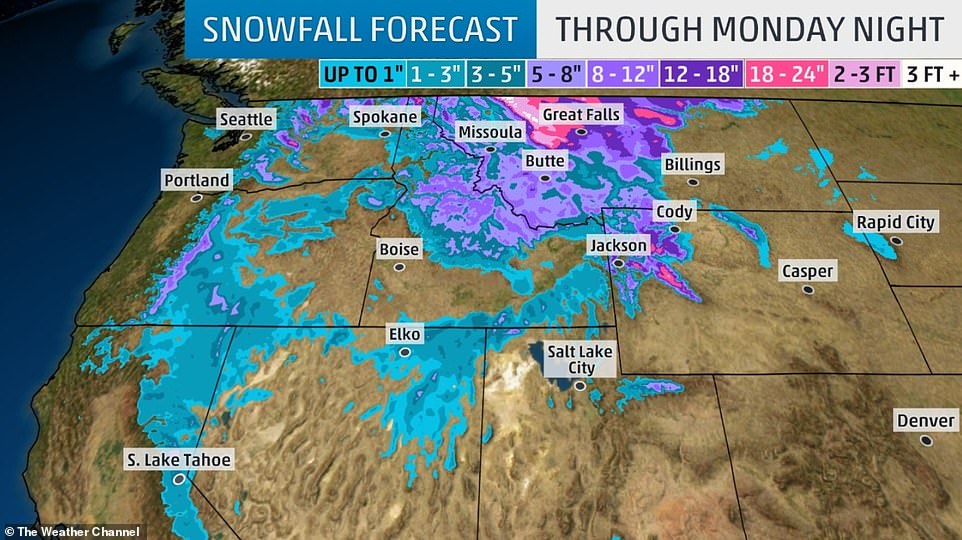 Up to 50 inches of snow are expected to fall in Western Montana, while winter storm watches have been issued in eastern Washington, the Idaho panhandle and northwestern Wyoming 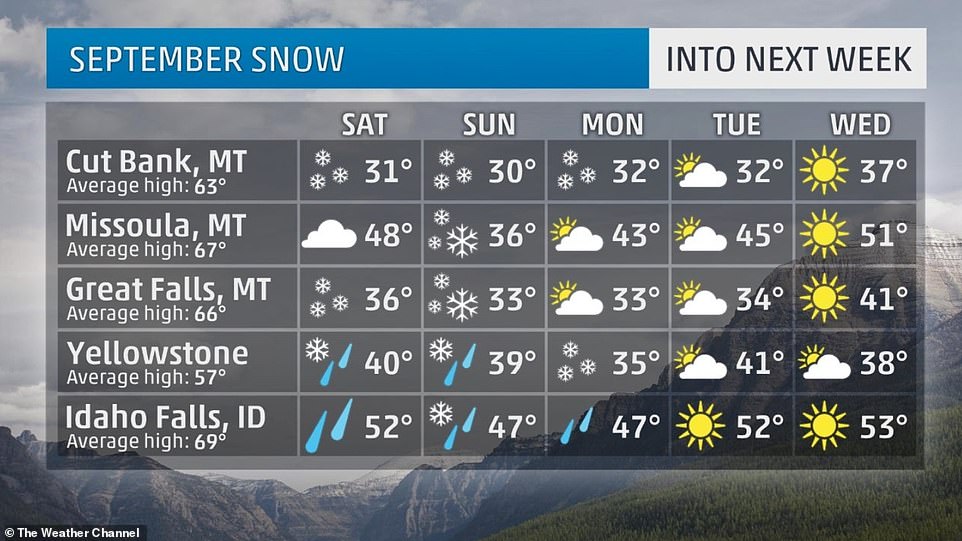 If snow falls in Missoula, Montana, as expected, it could be a historic event. It hasn’t snowed in the city in September since 1983 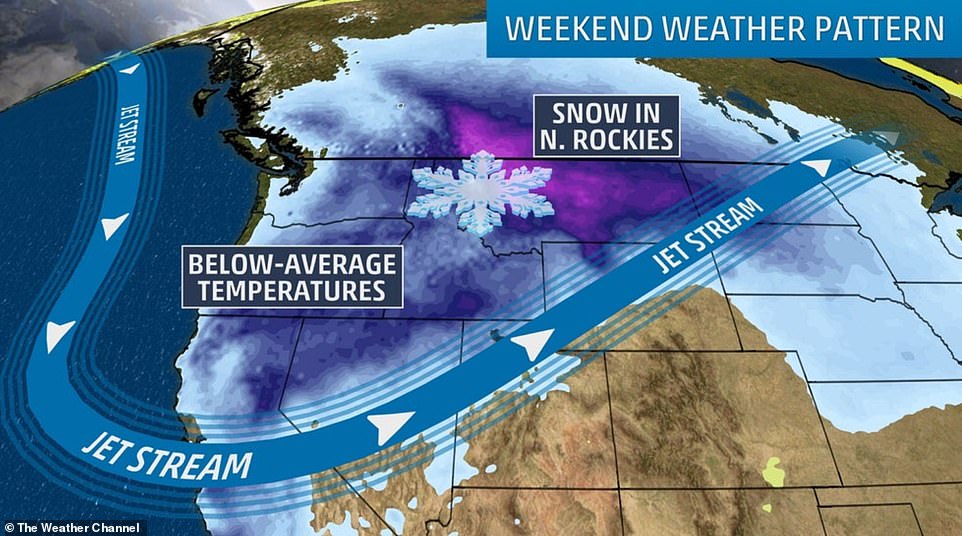 It could see the Sierra Nevada mountains in California covered in a one-inch blanket of the white stuff.

That will be followed by temperatures plunging to unseasonably cold levels early next week, with the coldest spots dropping to the teens and 20s.

Cities that haven’t seen September snow in decades canceled sporting events and readied their street plows, while residents brought in their garden vegetables and covered plants ahead of the hard freeze.

The brunt of the storm is expected to hit Montana with one community in storm warning area, Cut Bank, was expected to break its 15-inch (38.1-centimeter) snowfall record for September with this single storm. Great Falls’ 13-inch (33.02-centimeter) September record may be threatened, too, Nutter said.

Winter storm watches also have been issued in eastern Washington, the Idaho panhandle, western Montana and northwestern Wyoming, where lesser amounts of snow were expected to fall. 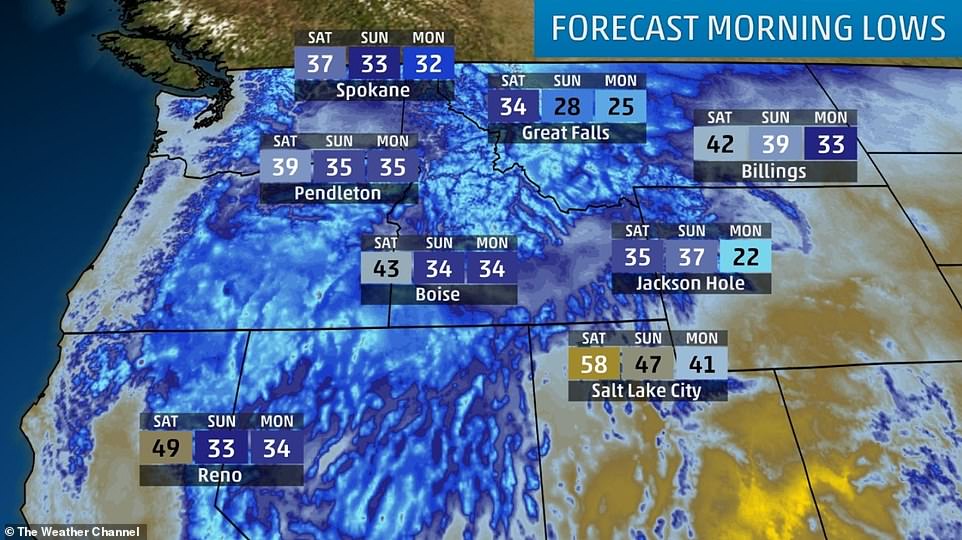 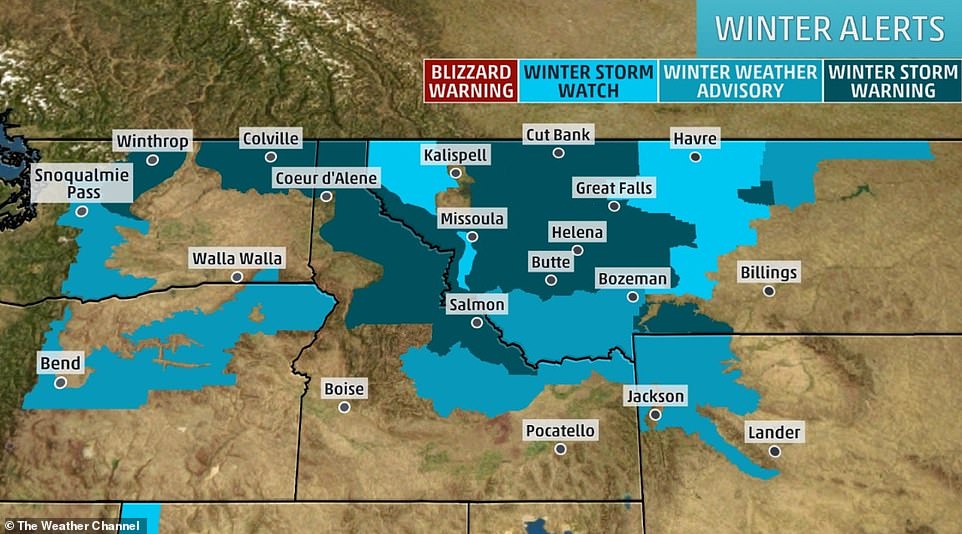 Isolated snowstorms in the mountains aren’t unusual for September, but the amount of snow being forecast and the storm’s vast area make it a potentially historical event, Nutter said.

Nutter said it was too early to link the storm to the effects of climate change, and that meteorologists are instead focused on what the storm will do.

‘In general, scientists are seeing with a warmer planet that individual weather systems are becoming a little more energized,’ he said.

Glacier National Park instituted some temporary road and campground closures ahead of the storm. Elsewhere, Montana wildlife officials and avalanche centers warned hunters and other outdoor recreationists to be careful in hazardous backcountry conditions.

NorthWestern Energy was increasing staffing at its customer service centers and preparing equipment to respond to power outages, said spokeswoman Jo Dee Black, but cautioned that call wait times might be longer if the outages are widespread.

The large amounts of fresh snow expected could also lead to record low temperatures next week, as the thermometer is expected to drop into the single digits over the high country. Intermediate elevations, meanwhile, could see temperatures in the teens and 20s.