White House counselor Kellyanne Conway revealed she, too, is a victim of sexual assault, in an emotional interview on CNN Sunday morning.

Conway was talking about what was happening with Brett Kavanaugh’s Supreme Court nomination when she said she, too, was a victim.

‘I feel very empathetic, frankly, for victims of sexual assault and sexual harassment and rape. I’m a victim of sexual assault. I don’t expect Judge Kavanaugh or Jake Tapper or Jeff Flake or anybody to be held responsible for that,’ she said, her voice choking up.

‘You have to be responsible for your own conduct,’ she told CNN’s Jake Tapper on ‘State of the Union.’

White House counselor Kellyanne Conway revealed she, too, is a victim of sexual assault 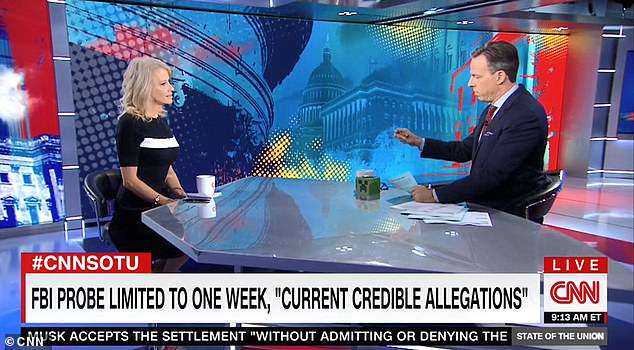 She went on to say Kavanaugh was no Bill Cosby, who was convicted of drugging and raping a woman.

‘This is not Bill Cosby. Those comparisons on your network are disgrace and the anchor should have called them out. This is not even Bill Clinton,’ she said.

She also showed sympathy for the victims of sexual assault who confronted Republican Sen. Jeff Flake in an elevator on Friday, which he cited as part of the reason he asked for an FBI investigation into the allegations against Kavanaugh.

‘This is partisan politics. I want those women who were sexually assaulted and confronting Jeff Flake, god bless them, but go blame the perpetrator. That’s who is responsible for the sexual assaults,’ Conway said.

Tapper expressed his sympathy to Conway, who offered no further details on her assault.

‘This is the first time I’ve ever heard you talk about something personal like that and I’m really sorry,’ he said.