Here goes: I am a man who likes housework. There, I’ve said it. As rare as a unicorn. One life lesson I’ve learned in middle age is that it is perfectly possible to do the washing-up and be a man who watches the Premier League. They are not mutually exclusive.

I do have an advantage: I’m a neat freak. I get genuine happiness from tidiness. I follow my wife all day straightening the cushions. It drives her mad, but I also like doing the tidying. Marie Kondo can teach me nothing.

There are few things in life more satisfying than running a Karcher condensation vacuum over steamed-up windows. Don’t get me going on ironing. The joy of a crisp pleat. Preferably on a Sunday night in front of Antiques Roadshow. I know how to live.

I write and make TV programmes about architecture and design, so the home is important to me. But I’m not alone. There are more of us out there than you might think.

Tom Dyckhoff, pictured with his wife Claire, says he’s proof husbands can love housework. He says he gets genuine happiness from tidiness, and that few things in life are more satisfying than running a Karcher condensation vacuum over steamed-up windows

Last week, an Oxford University study found that men prefer doing household chores to going out to work. The university’s Centre for Time Use Research asked more than 4,000 people to rate the activities they did all day, from commuting to putting the bins out. On average, it found that men rated housework higher than their paid job. For women, it was the exact reverse.

Men tend to see housework as an escape from the drudgery of work; women find the opposite. Admittedly, this is like choosing between the devil and the deep blue sea. Which would you prefer: scrubbing the rim of the loo or inputting data for ten hours next to sweaty Geoffrey, before standing on a train with your face in an armpit?

The study’s Dr Pierre Walthery observed that the results may be because women tend to do the drearier chores, while men tend to do household jobs they slightly enjoy.

In our home, I do the cooking and washing-up every night. My wife Claire, who works in PR, packs the school bags. I water the plants, she changes the oil in the car. I work full-time, while she works part-time, so does more of the childcare (we have two children under six). She bakes cakes. I do not. We both put the washing on. We both take the rubbish out.

I won’t say we don’t sometimes argue about who exactly is going to cobble together a Despicable Me-themed costume for school the next day, when the chore is sprung upon us at 7pm, but we parcel out the jobs as best we can.

All very smug. But I don’t know any other way. It’s hardwired into me. In the Seventies, I grew up in a home with two older sisters and a mum who was definitely not going to scrub the floor while I sat watching Hong Kong Phooey with my nose in a packet of Monster Munch.

Mum loved being at home, and she made sure we all felt the same. While feminism was emerging in the Sixties, she did a most unfeminist thing for the time: she gave up a place at university and then a promising legal career because she wanted to be a homemaker.

As a child, I never understood it. As I’ve got older, though — and the joy of employment fades after 25 years at work — I understand it a little more.

She’d divvy up the housework among us for pocket money. 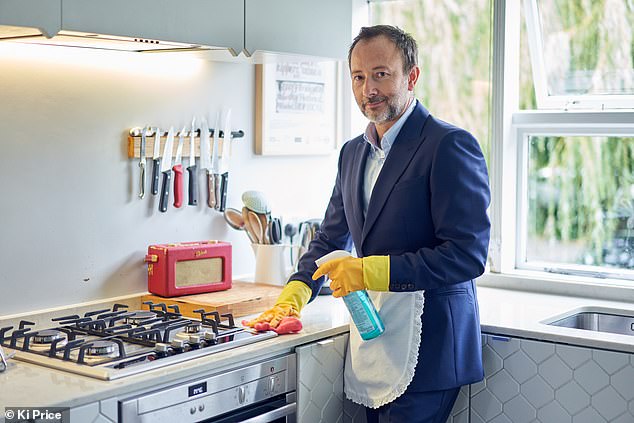 Tom says that his love of housework is ‘hardwired’ into him after his mother would get him to complete chores for pocket money. Both his parents taught him the skills needed to run a household – his mother had him cooking as soon as he could walk, and his father taught him how to put up shelves and wire plugs

I cleaned the doorknobs, emptied the bins, wiped the tables down after meals and took the plates to the kitchen. She got us all cooking as soon as we could walk. We all did the washing-up.

Dad taught us how to wire plugs, pot plants and put up shelves. Looking back, we basically had training in running a house.

No, Mum was not a feminist, but in a way she was. And, let’s face it, doing housework is deeply political — for men and women.

In The Second Sex, Simone de Beauvoir called housework Sisyphean. In Greek mythology, King Sisyphus was punished by having to haul a boulder up a mountain only for it to tumble back down again, for all eternity. De Beauvoir thought the same about housework. It never ends.

We wake up. The home is tidy. One hour later, the place, emptied for work, school or nursery, is transformed — there are ketchup streaks on the kitchen table and handprints smeared on windows, and a tornado appears to have passed through, redistributing every single book and toy to the furthest corners of the flat.

We come home. We tidy, we clean, we go to bed. Repeat. I accept the endlessness of housework, just like I accept I have to floss and vaguely attempt exercise. I like flossing and exercising because you feel better having done it. 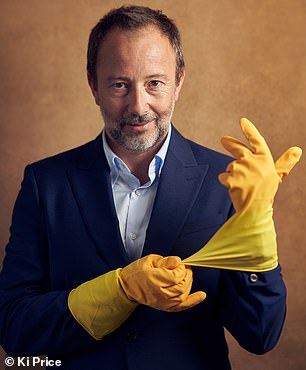 Tom says that in 2018, men and women aren’t so easily stereotyped, so the important thing is to divvy up the household chores fairly – even if that means women are putting up shelves, and men are putting on their Marigolds

But I actually enjoy housework. I get into the zone like a zen master.

The world may be in chaos, but at least my magazines are in a neat pile on the coffee table.

I have a weakness for Mary Berry’s Household Tips And Tricks: Your Guide To Happiness In The Home. Who but my surrogate mum Mary will tell me how often to turn my mattress (answer: every six months)? But, as we’ve established, I’m a bit weird. When I flat-shared in my 20s, my room was the only one not carpeted in underpants and old pizzas. That’s when the neat-freak name stuck.

Uptight? No, just prematurely middle-aged (OK, maybe a little uptight.) In my heart, I knew messy or dirty homes make us more unhappy. A report from the University of California, Los Angeles found a relationship between high levels of cortisol, the stress hormone, and the clutter and disarray of our homes.

Only here’s the rub: men generally feel that stress far less than women. Women get more anxious as dishes increasingly pile up in the sink. Men want the house tidy(ish), they just don’t want to do the tidying. Much of this is because of learned habits.

Gone are the days when it was drummed into a woman from an early age that she will look after the home; and into a man that he won’t. For years, if a woman was depicted in film or TV in a messy home — Bridget Jones, for example — her life was in crisis.

In 2018, though, men and women aren’t so easily stereotyped. Married or cohabiting, we need to divvy up the labour. The secret of every relationship is compromise. Decide among yourselves, but do it fairly and honestly. Women, feel free to put up shelves and put out the rubbish. Men, if you truly prefer housework to work, put on your Marigolds — and pick up your own damn pants. Who knows, you might even enjoy it.