‘I’m scared for the lives of children’: Hospital warns of FAKE car seats

Parents, beware: ‘fake’ car seats that are so flimsy they can be bent with your bare hands are being sold online, an Idaho hospital is warning.

St Luke’s Hospital in Boise investigated a number of child car safety seats and told KTVB that a number are so weak and poorly constructed that a child would almost certainly die if they were riding in one during a crash.

More children under 15 die of unintentional injury than by any other cause of death in the US, and the majority of those injuries occur in car accidents.

Effective car seats are life-saving, but parents must be careful to choose the real thing – not temptingly cheap ones.

A car seat technician at St Luke’s warned against buying car seats on Craigslist or Facebook market place and explained how gibberish on labels and ‘deals’ are dead giveaways of a dangerous, counterfeit seat.

Every year in the US, thousands of children die needlessly in car accidents.

The single best preventative measure parents can take to make sure their children are properly buckled up and strapped in.

For infants under a year, that means a proper baby carrier, a toddler car seat through age four and a booster seat until they are 4′ 9″.

A infant good car seat is a steep but crucial investment for new parents.

Modern car seats may look simple, but effective ones are engineering marvels and not a purchase worth cutting corners on.

Sites like Amazon make it easy to compare prices and models, but pictures and descriptions can easily be misleading, specialists at St Luke’s Pediatric Education and Prevention Program warned on Wednesday. 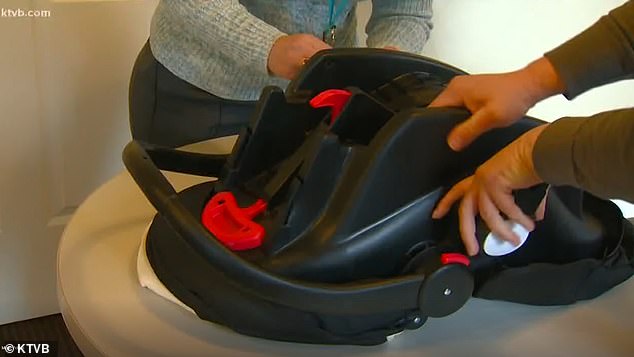 There were tell-tale signs – if the parents knew what to look for.

At St Luke’s Boise location, a woman being discharged with her newborn brought her baby out to a car seat that was all wrong.

Immediately, technician Brittany Joplin saw that the shoulder straps were positioned far too high on the seat. There was a great deal of space above where the baby’s shoulders would be, a flaw that could let the child easily slip up and down. 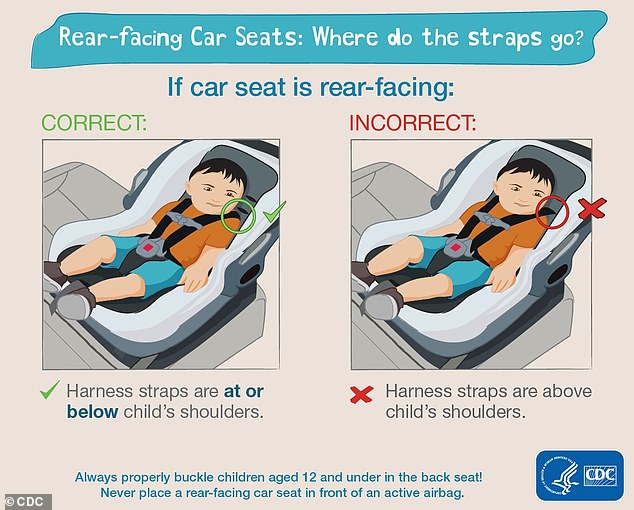 The CDC warns that straps need to be at or below a child’s shoulders (left). If they are too high, as they were on the fake seats St Luke’s found, the child won’t be adequately held in place

A more damning detail: there was no chest clip to keep the baby from jolting forward. These clips are required on all seats in the US.

Worst of all, the base of the seat was made of such thin, weak plastic that Joplin could bend and nearly break it with her hands – not to mention what the force of a car crash could do to it.

Plus, it sat on a piece of metal on the bottom, failing US standards.

‘There’s no way a child would survive a crash in a seat like this.’

The woman said the seat had been a gift from family members, and she had no idea it was insufficient to keep her new baby safe.

Joplin encountered another woman who brought two seats to a safety check event. One was real, but the other was a bogus product.

The counterfeit seat had many of the same alarming weaknesses as the first woman’s. Jopling noted that the seat was bare of warning labels, certification stickers or federal labels.

HOW TO SPOT A FAKE CAR SEAT: FLIMSY CONSTRUCTION AND NONSENSICAL OR MISSING LABELING ARE DEAD GIVEAWAYS

Joplin advised parents to look at the physical construction of the seat, the labeling and contents of the box for signs that a seat might be counterfeit.

If a car seat lacks a chest strap and doesn’t have metal harness components, it probably isn’t real.

US federal standards also require a series of warning labels or stickers on the seat.

There should be label confirming that the seat has passed muster for performance and design for children up to 80 lbs. A certified seat also has to have a label indicating the maximum weight that the anchors of the seat are functional up to. The date the seat was manufactured must also be clearly indicated by a sticker or label.

You can also look to the language used on any tags, instructional or warning labels on the seat. 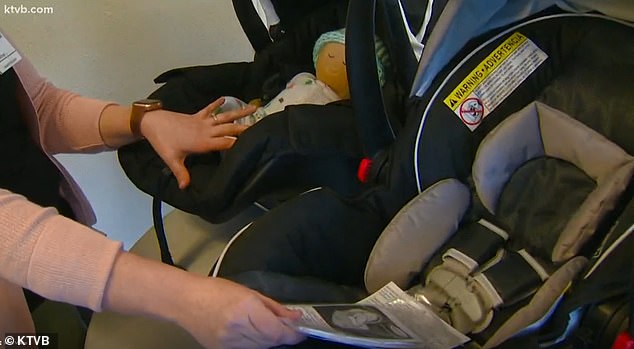 Legitimate, tested car seats have obvious warning labels and user manuals (right), unlike the counterfeit seat that was completely bare of stickers and labeling (left)

One of the fake car seats that the St Luke’s team found had a ‘warning’ label that was utter nonesense.

It read: ‘Warning: Please use safety belts immediately after your baby can sit by himself.’

‘If the English used to explain the car seat or any features is jumbled or doesn’t use proper grammar it’s another big red flag that it’s likely not a legitimate car seat,’ said Joplin.

Real car seats should also come with an owner’s manual and registration card.

‘It scares me. It scares me for the lives of little children that they have no idea and these are life-saving devices and if they need to work that one time, you need it to work 100 percent,’ Ellis said.

WHAT A GOOD CAR SEAT LOOKS LIKE: SAFE SEATS HAVE STRONG STRAPS AND CONSTRUCTION

There are three general types of car seats: rear-facing, front-facing and booster seats.

For the youngest children, a rear-facing car seat is safest.

Often, babies outgrow these within their first eight to nine months, but they shouldn’t use front-facing seats until about age two.

Some seats can convert from rear- to front-facing, and others can also be changed into booster seats.

Car seats must have a harness with sturdy metal components, a secure way of being fastened into the car and are best when they can move with the child’s body weight and reduce the chances of whiplash or spinal cord and neck injury.

THE DO’S AND DON’TS OF CAR SEAT SAFETY

Over 100,000 children die in car accidents in the US in a year, but using a proper car seat correctly can save lives.

The Centers for Disease Control and Prevention (CDC) advises that infants use a rear-facing car seat until at least age two, depending on their weight.

Up until age five, children should be in front-facing car seats. After age five and until they are 4’9″, kids should ride in booster seats.

Equally important to buying a safe, tested car seat is using it properly. 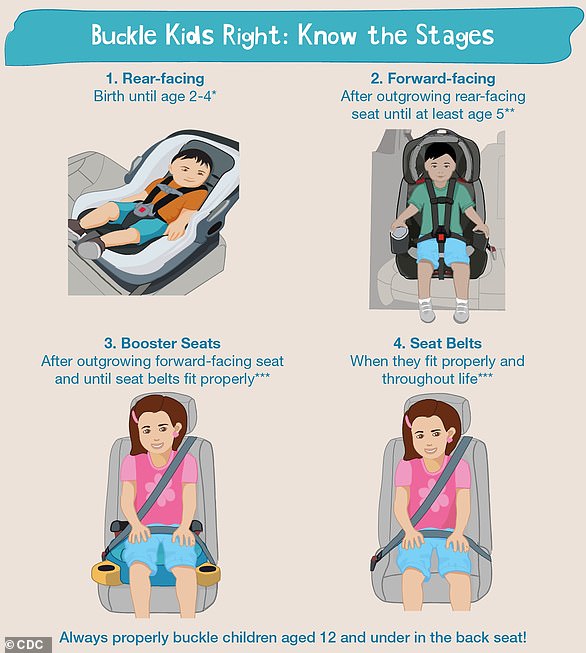 As children grow, the proper kind of car seat for them changes, but children under 12 should always sit in the back seat 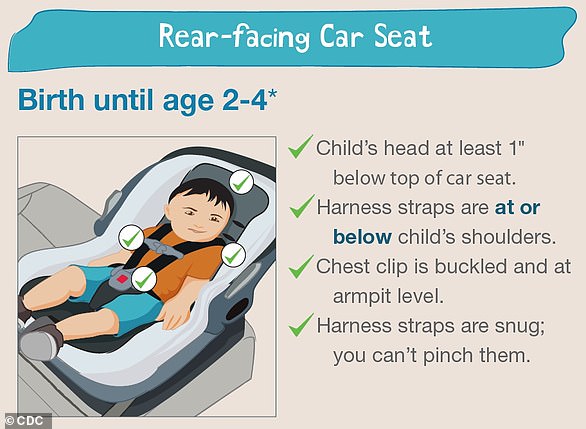 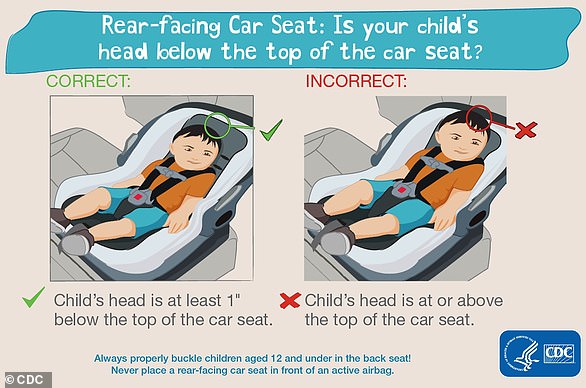 Make sure that the baby is not sitting up too high or is too big for the seat. Properly designed seats have sufficient cushion for the back of the child’s skull 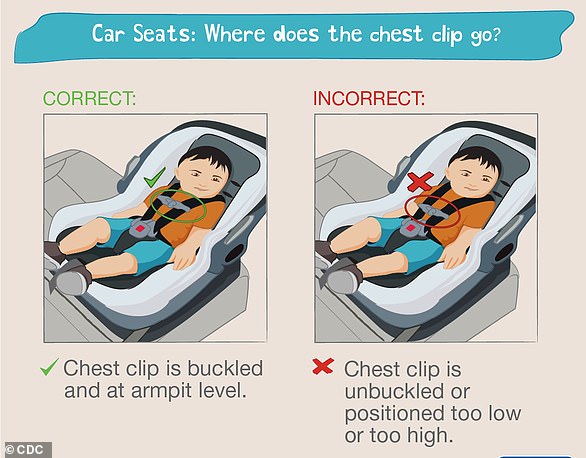