SEN reporter Sam Edmund Tweeted that there is also video footage circulating that allegedly shows Smith at a party.

‘A photo appearing to show Bulldogs superstar Bailey Smith with a bag of white powder has surfaced,’ he Tweeted.

‘A video is also in circulation of Smith at a party where he leans away from the camera before returning. It’s unclear when they were recorded. Dogs have been contacted for comment.’

The Dogs have released the following statement: ‘The Western Bulldogs are aware of images of Bailey Smith circulating on social media. The Club is investigating the legitimacy of these images and is not in a position to comment further at this time.’

Daily Mail Australia does not insinuate that Smith has done anything illegal. Smith has been contacted for comment. 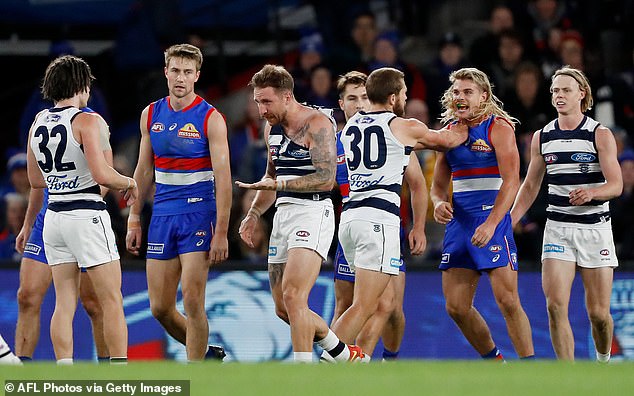 Earlier this week Smith expressed his remorse for the headbutt incident and said he had let his emotions get the better of him,

‘I’m disappointed to be missing the next two matches, and regret that I won’t be able to help my teammates on the field during that period,’ he said.

‘I understand what happened was outside of what’s expected of AFL players. Unfortunately, I let my emotions get the better of me, which is out of character for me.

‘I am determined to come back in a couple of weeks to continue giving 100 per cent for my teammates and the club.’

Smith was at the centre of another social media incident following the Western Bulldogs AFL grand final loss to the Melbourne Demons last season.

Video appeared on social media platform TikTok of Smith at a nightclub boasting about being awake for 48 hours and his desire for female attention.

A complaint was also made against Smith by a 22-year-old Gold Coast man who accused Smith of pushing him outside of a pub last October. No charges were laid by Queensland Police.

‘The club has conducted its own investigation and is satisfied that no further action is required at this point in time,’ the club said in a statement at the time.