Social media users are sharing photos of school lunches around the US — compared to those in other countries — to make the case for redirecting police funds toward education.

On Jun 9, Twitter user Erv from San Diego, California tweeted that the San Diego Police’s new annual budget is $566 million. Alongside this staggering sum, Erv included a photo of a lunch served at a San Diego public school, showing an unimpressive spread of chicken nuggets, macaroni and cheese, and carrot sticks that leaves much to be desired by way of nutrition and cuisine.

The tweet has prompted other Americans to shared pictures of unimpressive public school lunches that could benefit from more funding — while others shared snaps of lunches from Germany, France, and Spain to show how much better it could be.

Where the money is spent: Twitter user Erv from San Diego, California tweeted that the local PD’s new annual budget is $566 million — but this is what school lunches look like 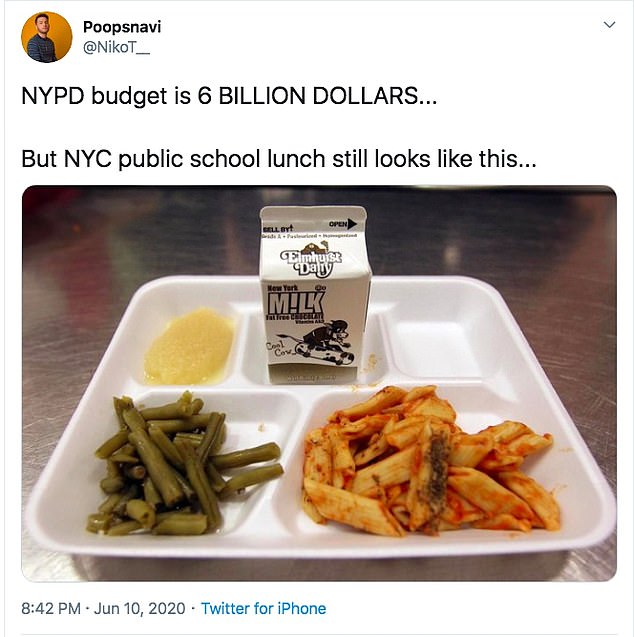 Yikes: Others responded with their own comparisons of local school lunch and local PD budgets 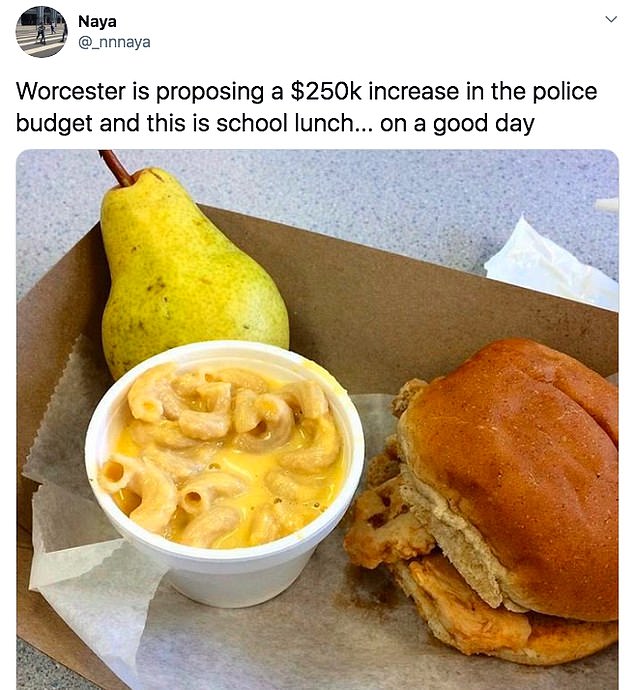 San Diego’s new $566 million budget will go into effect on July 1, a $27 million increase that was announced last week.

The funding boost was met by outrage from locals in light of widespread protests calling for American cities to defund police departments.

Advocates for defunding the police aren’t demanding the abolition of police departments in general. Rather, they’re arguing that police departments are over-funded while many other programs — like education, healthcare, and housing — are hugely underfunded.

The argument is that a large portion of the money spent on police should be redirected to other areas of need. 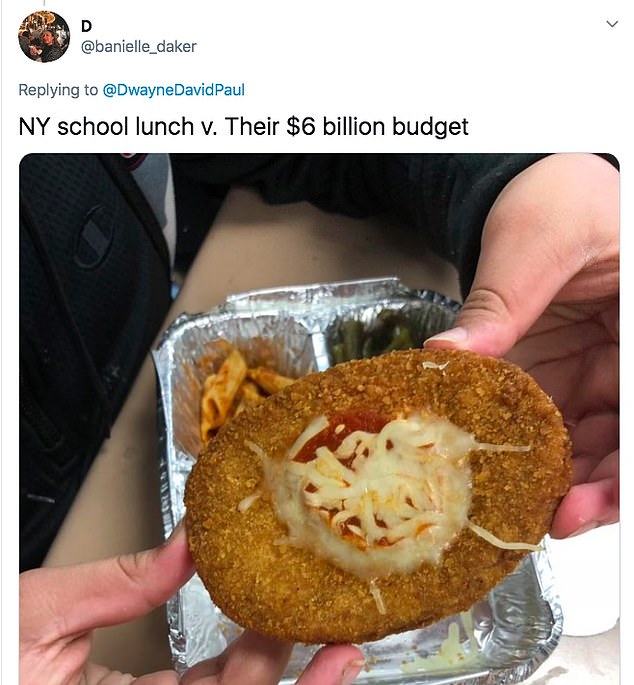 Guns over food: The NYPD has a staggering $5.6 billion police budget 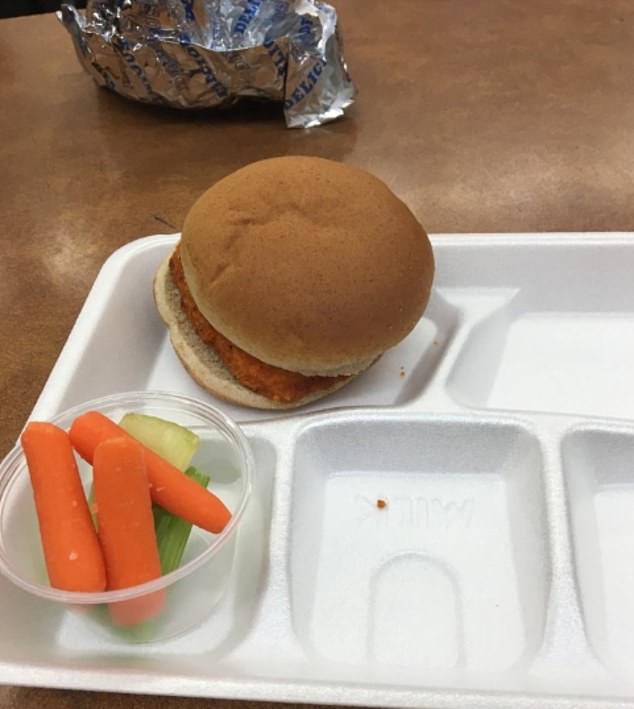 Yikes…Twitter user @shraq_kill_o_ne posted this school lunch photo of a slider, three mini carrots, and a bit of celery 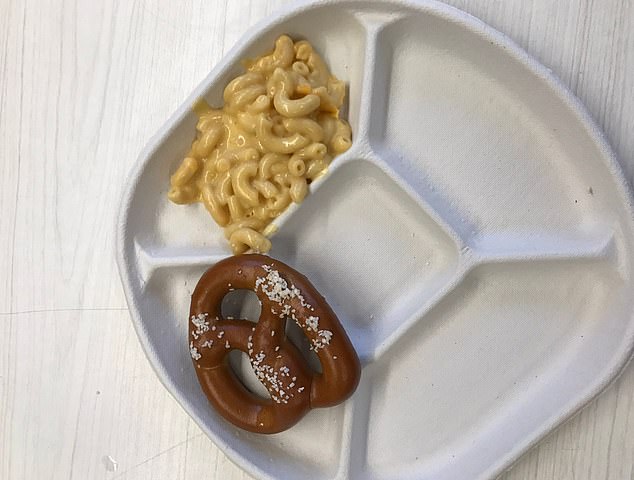 Where’s the veggies? While this New York City plate posted by @TiredinBrooklyn looks like a nice snack, it’s certainly not a nutritious meal 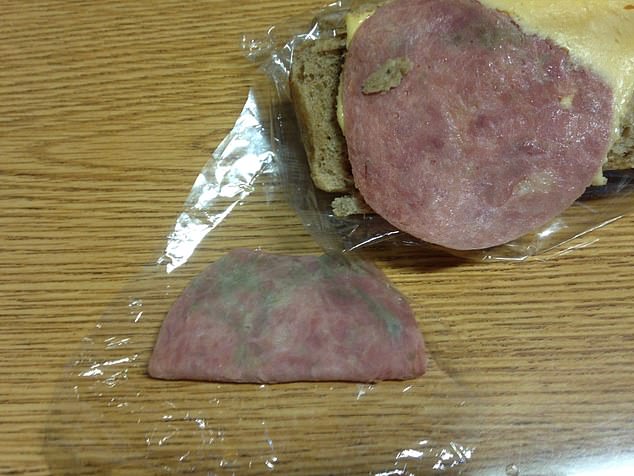 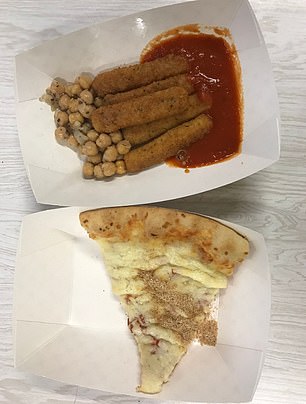 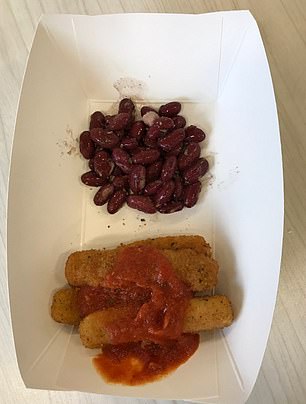 One of those areas of need, as the Twitter thread points out, is school lunches — which many children living in poverty rely on.

After Erv shared an example of a San Diego school lunch, others replied with images of their own.

One posted four photos of lunches from a school in Bed-Stuy in New York City — all of which look unappetizing and lack nutrition.

The images show mozzarella sticks and pizza, a moldy sandwich, and mac and cheese with a pretzel. 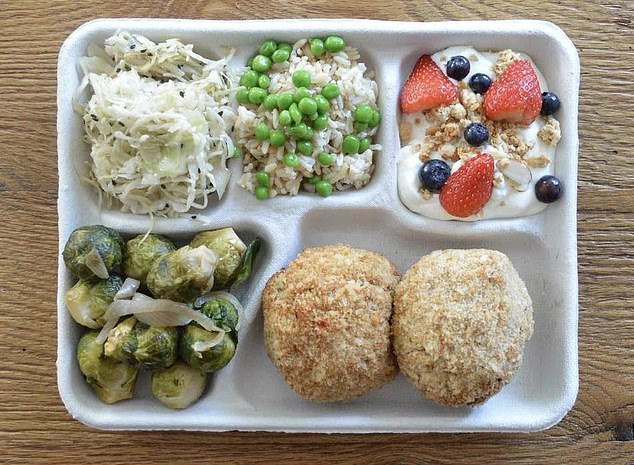 Comparison: Meanwhile, people shared other photos of what school lunches look like around the world (pictured: UK) 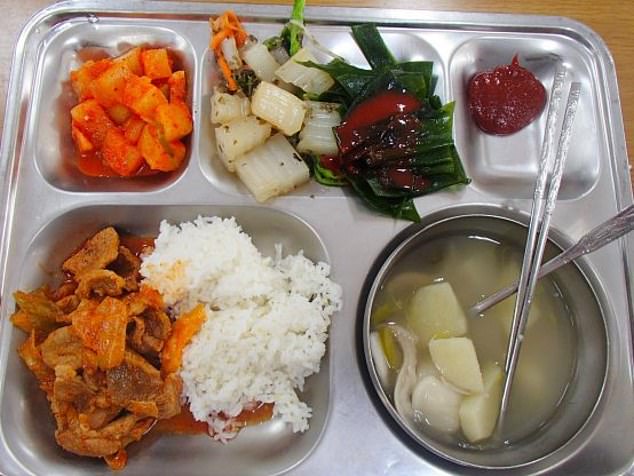 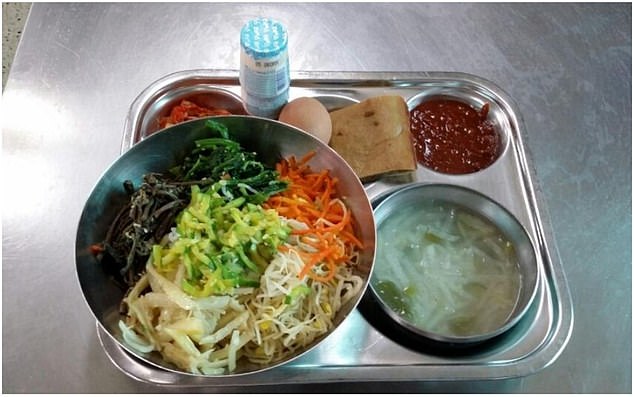 Mixing it up: The lunches (like this one, also from South Korea) have more variety 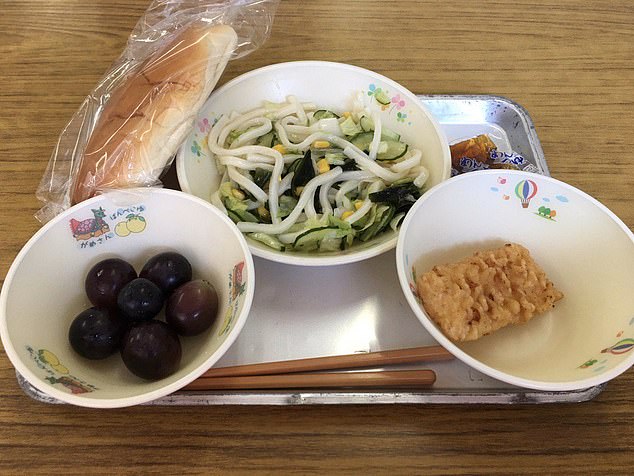 A bit of this, a bit of that: This Japanese lunch is small but covers several food groups 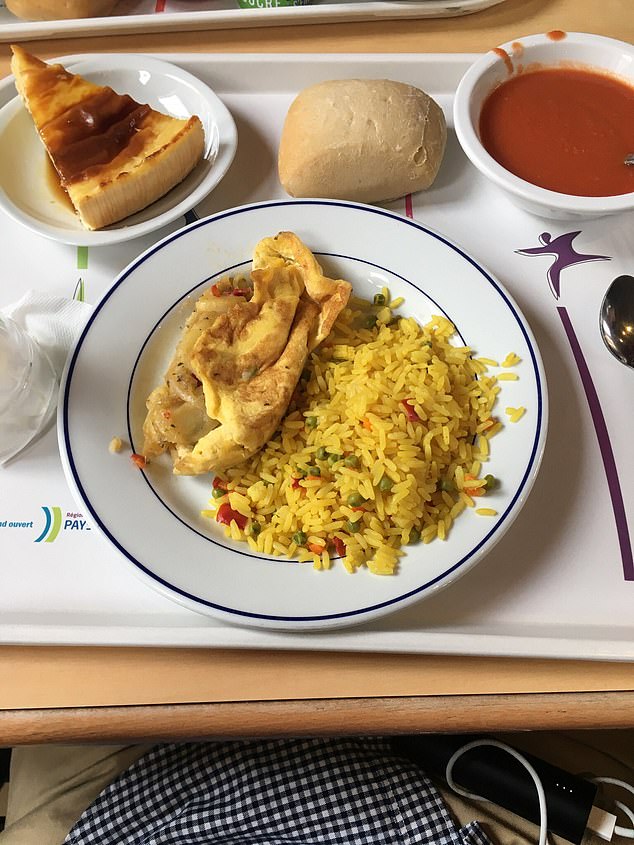 Yum! This school lunch from France has several courses (including a tasty dessert) 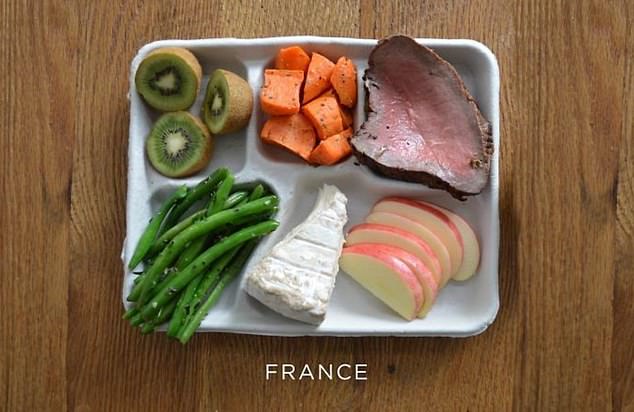 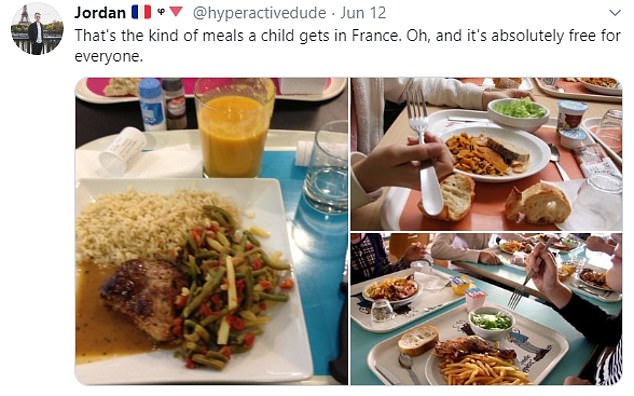 In comparison, photos of school lunches from other countries appear to include more food of higher quality and nutritional value.

A photo of a school lunch from France shows steak, carrots, asparagus, cheese, apples, and kiwi.

One from Brazil included salad, rice, beans, and plantains, while a lunch from Spain included rice, shrimp, soup, salad, and a hearty roll.

A tasty lunch from Italy was made up of a piece of salmon, salad, pasta, a large serving of grapes, and a piece of bread, and and a Finnish school lunch was comprised of carrots, beets, soup, and a fruity crepe.

One Twitter user even shared photos of what he said was food served at a German refugee camp, which looked miles better than the American school lunches in the thread. 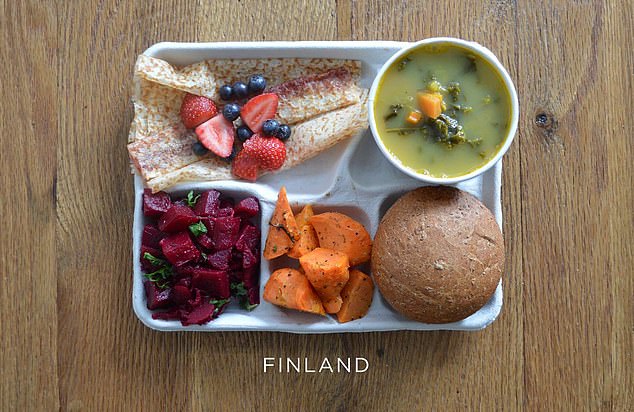 Colorful A Finnish school lunch was comprised of carrots, beets, soup, and a fruity crepe 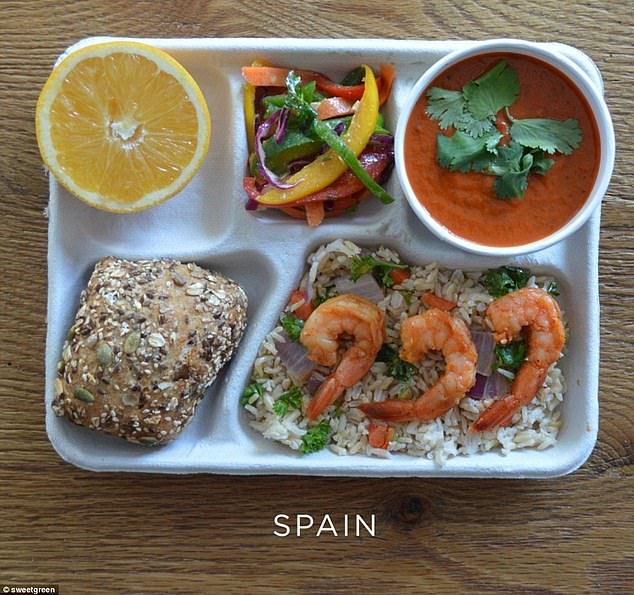 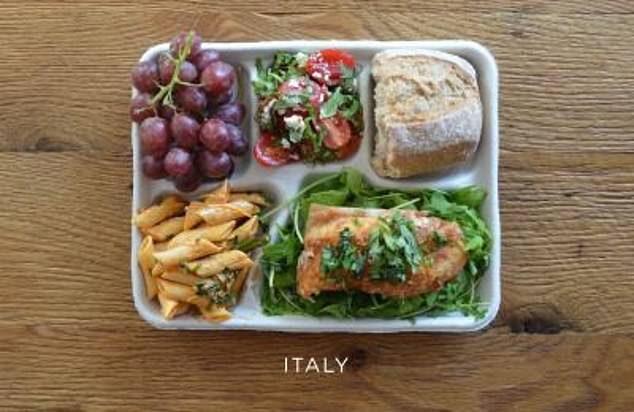 Looks good! A tasty lunch from Italy was made up of a piece of salmon, salad, pasta, a large serving of grapes, and a piece of bread 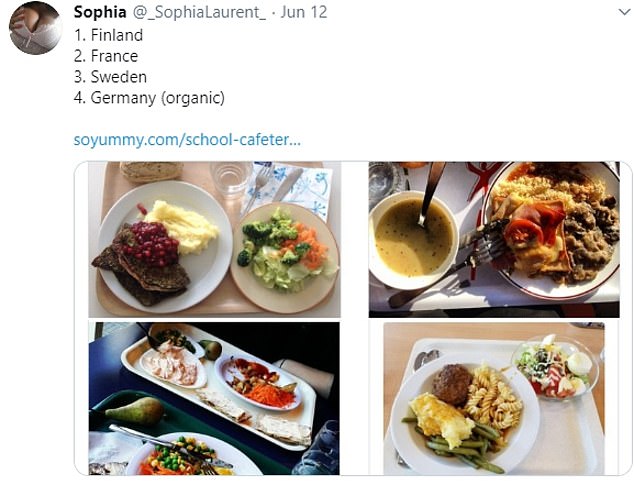 Pricey: The US spends billions of dollars on policing every year 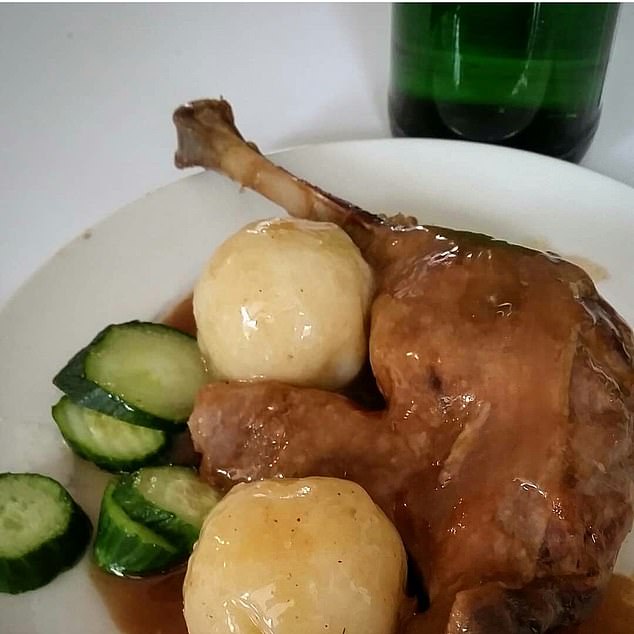 Impressive: One user shared a photo of food served at a German refugee camp to compare it to the less-than-appetizing meals offered in the US