Emotional pictures issued on Twitter by Bush’s spokesman Jim McGrath show his children walking behind the coffin to the burial plot where he was laid to rest beside his beloved wife Barbara and daughter Robin who died of leukemia aged 3.

The flag was then presented to Bush’s daughter, Doro Bush Koch, who was visibly overcome with grief and she took the flag from a solider.

The flag that was draped over George H.W. Bush’s coffin was was presented to Doro Bush Koch 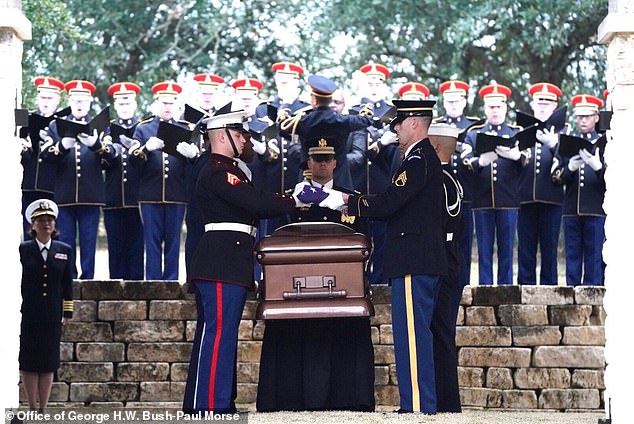 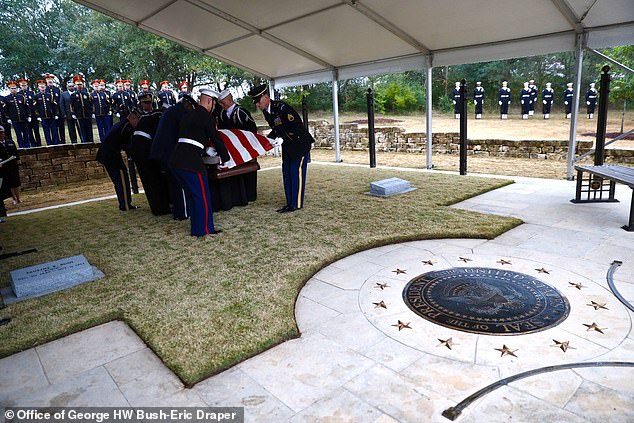 Texans turned out all along the 70-mile route to pay tribute to Bush, whose flag-draped casket was borne in a glass-sided train car pulled by Union Pacific locomotive 4141.

For nearly three hours, crowds waved US and Texas flags, placed their hands on their hearts, saluted and took photographs and video, while firetrucks hoisted large flags on bridges over the tracks.

American flags were hung on buildings and a large sign read: ‘President George H.W. Bush Thank You For A Lifetime Of Service.’

The 41st president’s son George W. Bush and his wife Laura, along with other members of the Bush family, watched somberly as a military honor guard carried his casket off the train.

His flag-draped casket was wrapped with a plastic cover due to the rainy conditions. 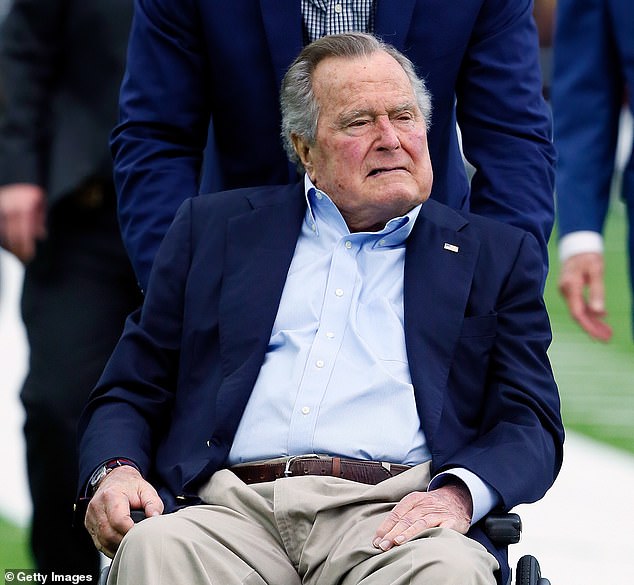 The 41st president passed away late Friday at age 94, eight months after his beloved wife Barbara 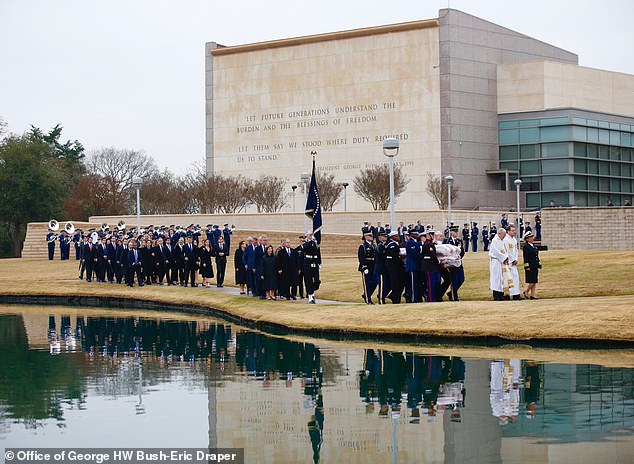 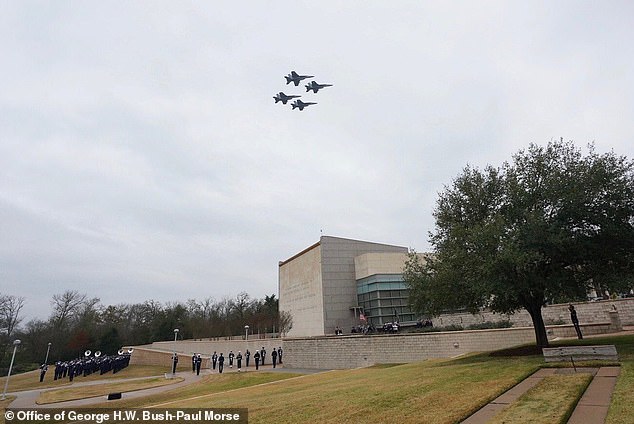 Following the service, a hearse took the late president to the Union Pacific train station in Spring, Texas, where a special funeral train, with a locomotive painted in the colors of Air Force One and named 4141, journeyed two and a half hours to College Station.

The 41st president’s son George W. Bush was so moved by the thousands of Texans who braved the gloomy weather to pay their respects to the former president that he posted a photo of himself waving to the crowds, writing: ‘Thank you for making 41’s last ride so special.’ 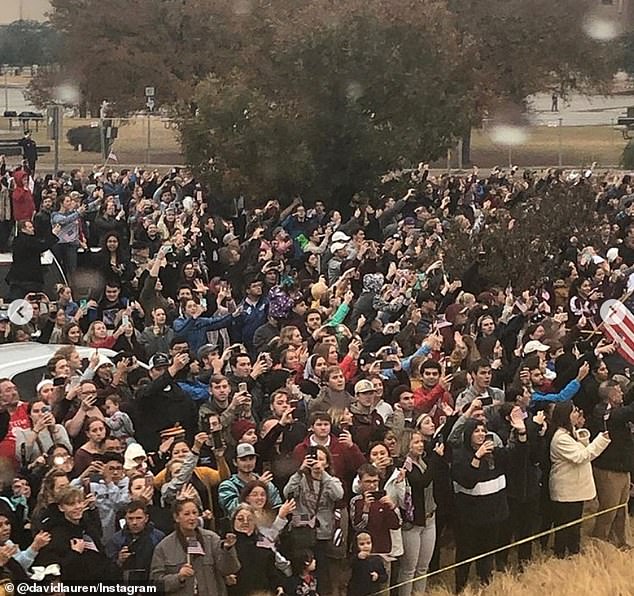 Texans turned out all along the 70-mile route to pay tribute to Bush, whose flag-draped casket was borne in a glass-sided train car to his final resting place 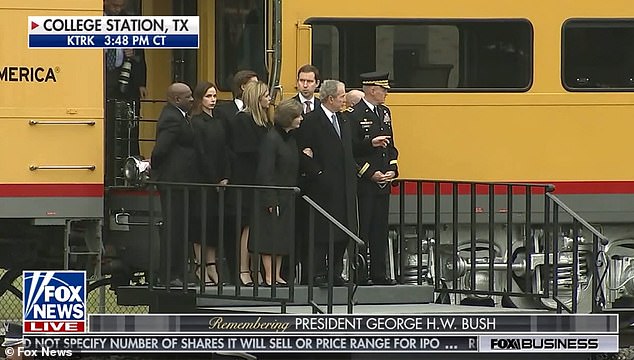 Bush’s family, who left St. Martin’s Episcopal Church in Houston following his funeral and escorted the former President’s remains to his burial plot 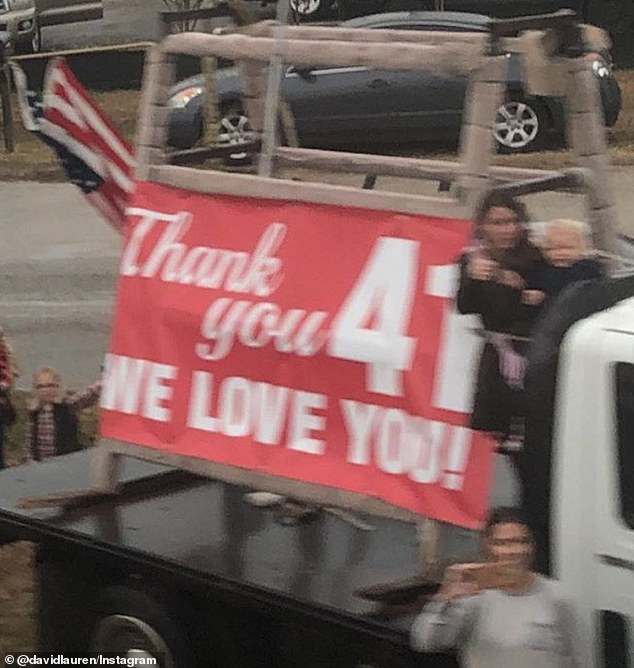 Bush’s body was later loaded onto a special train fitted with clear sides so people could catch a glimpse of the casket as it rumbled by. David Lauren, Lauren Bush Lauren’s husband posted the photos from inside the train 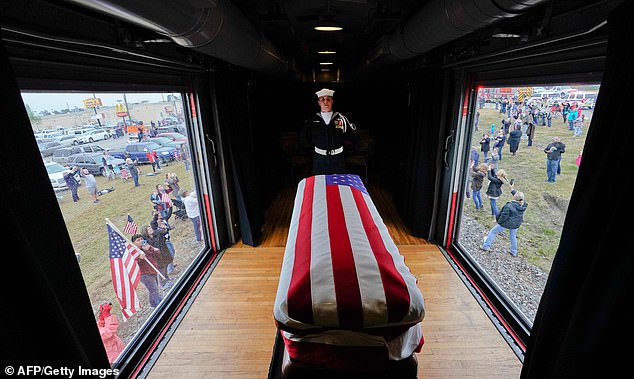 The flag-draped casket of former George H.W. Bush passes through Magnolia, Texas,  in a glass-sided carriage along the route from Spring to College Station

Bush was then taken to his presidential library at the university, where he was laid to rest at a private ceremony next to his wife, Barbara, who died in April, and his daughter Robin, who died at age three in 1953.

About 2,100 cadets in their tan dress uniforms with jackets and ties and knee-high boots waited for hours on the cold, gray day to line the road -known as Barbara Bush Drive – to the Bush library’s front doors.

The US Navy conducted a 21 strike fighter flyover, a salute to the World War II Navy pilot, followed by a 21-gun cannon salute on the ground. 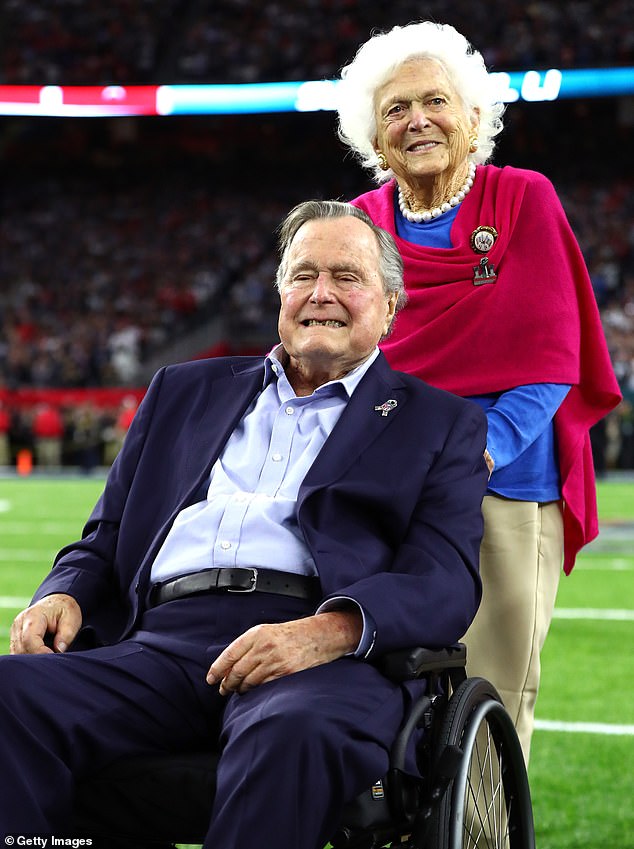 Bush was buried alongside his beloved wife of 73 years Barbara, who died six months ago 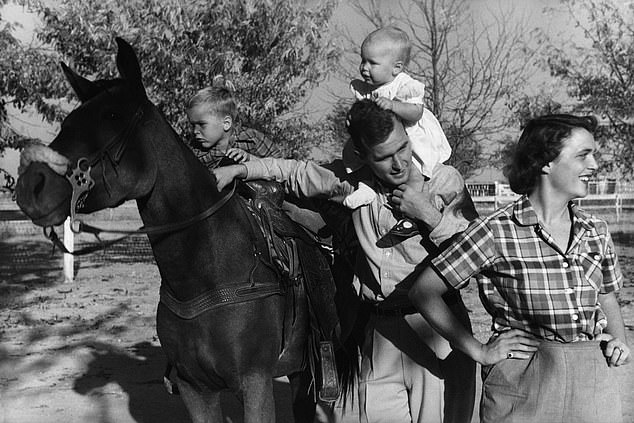 The flyover was performed as an honor guard, close friends and relatives accompanied Bush’s casket to his family’s burial plot.

Baker choked up as he delivered a moving tribute to his friend, saying ‘he’s been my friend and he’s been my role model.’

Baker served Bush as White House chief of staff and secretary of state.

Bush, who died last week at his Houston home at age 94, was eulogized Wednesday at a funeral service at the National Cathedral. By evening, his casket was at St. Martin’s Episcopal Church in Houston.