Images show the U.S. being battered by storms in 2017

The past 12 months have been intense for the stormchasers of the United States as 2017 brought a myriad of hurricanes, tornadoes and thunderstorms.

Jason Weingart has been an avid storm chaser for more than eight years, but says 2017 has been a particularly challenging year, especially due to the hurricanes that have devastated various countries.

Between April and May alone, Mr Weingart witnessed an incredible 14 tornadoes as he chased storm after storm, and said this year has been one of his toughest.

Thunderbolt and lighting: A cloud-to-ground lightning captured on June 24 at the U.S.-Mexico border 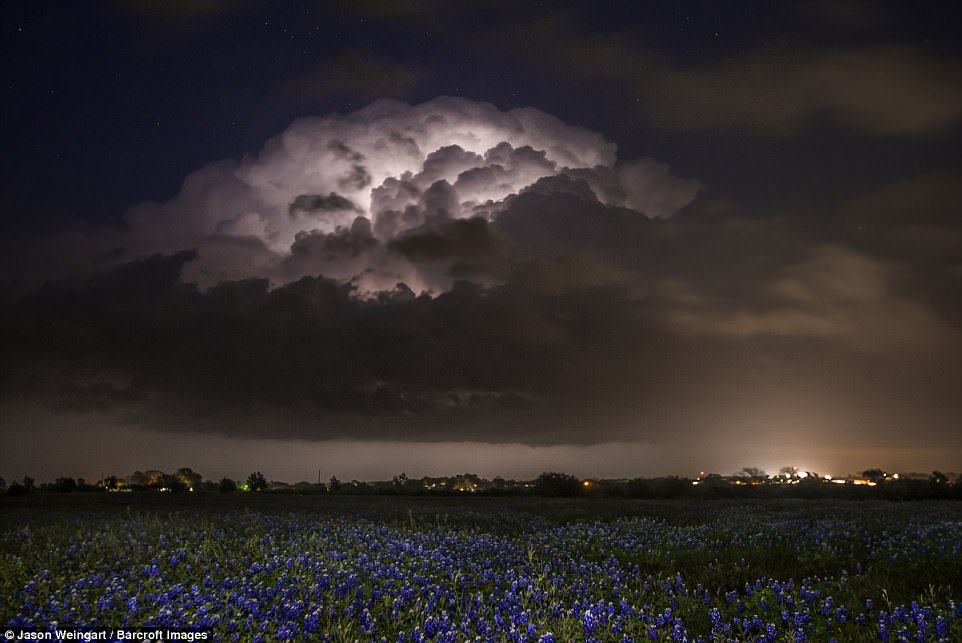 Very, very frightening: An intra-cloud lightning – a lightning that takes place between the top and bottom clouds of a thunderstorm is pictured on March 24 in Brenham, Texas 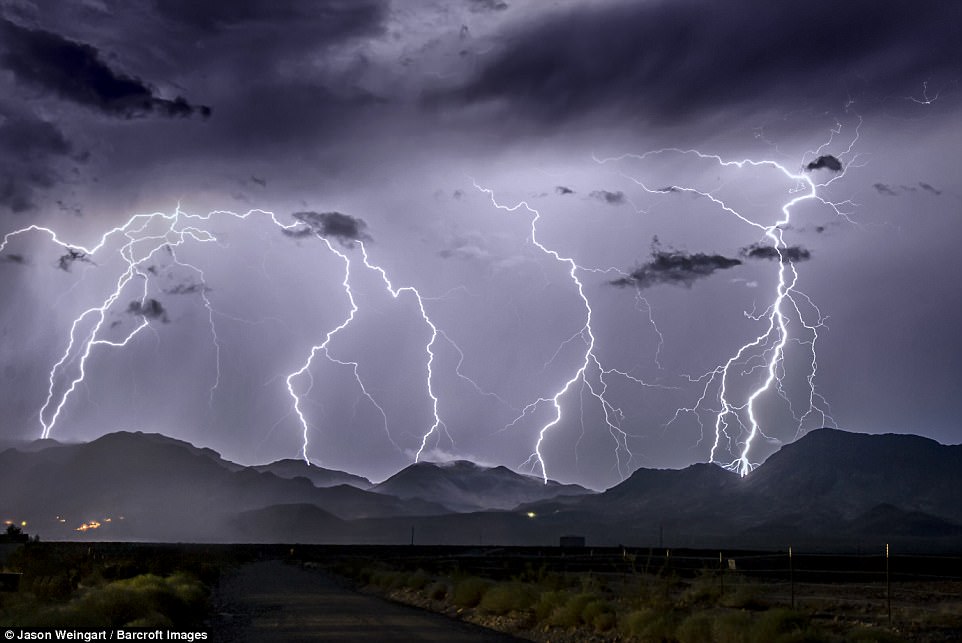 Top to bottom: A cloud to ground lightning captured during a thunderstorm on July 31 in Safford, Arizona

He has captured these stunning images which include breathtaking lightning at the Mexico-US border, intra-cloud lighting in Texas and a thunderstorm over Lake Powell, Arizona

Mr Weingart said: ‘The most memorable storm of the year was the swarm of tornadoes that occurred on April 29th near Canton, Texas.

‘It was one of those days that looked very marginal in the morning but as the day progressed, everything came together to create a prolific localized tornado outbreak.’

In the month of May, the storm chaser saw a supercell in New Mexico, a mesocyclone in Colorado and some breathtaking lightning in Oklahoma.

Hurricane Harvey, which formed on August 17 and dissipated on September 3, hit Texas and Louisiana with devastating effect and caused billions of dollars worth of damage. 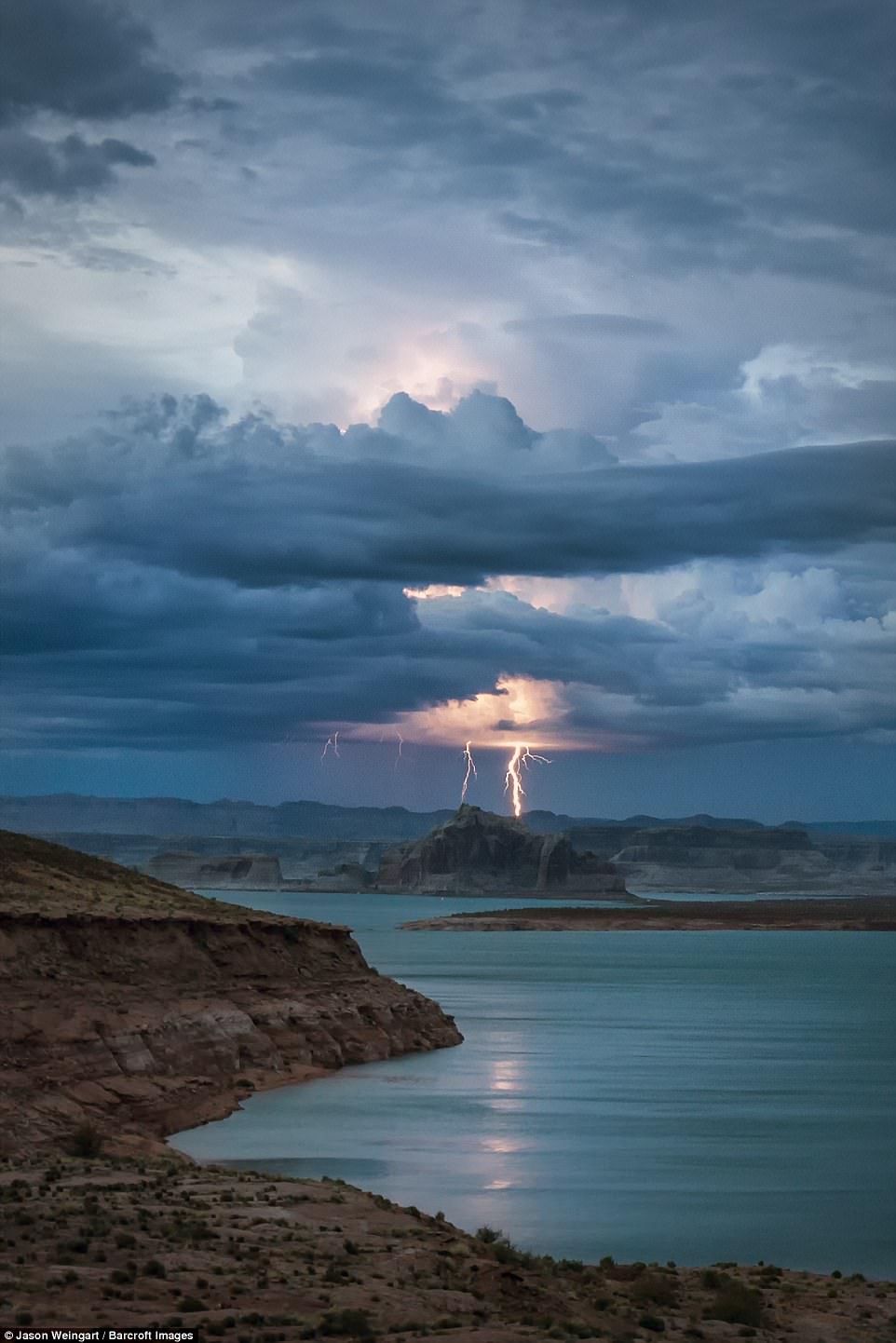 Beautiful danger: A thunderstorm can be seen in the distance over Lake Powell on July 29 in Arizona 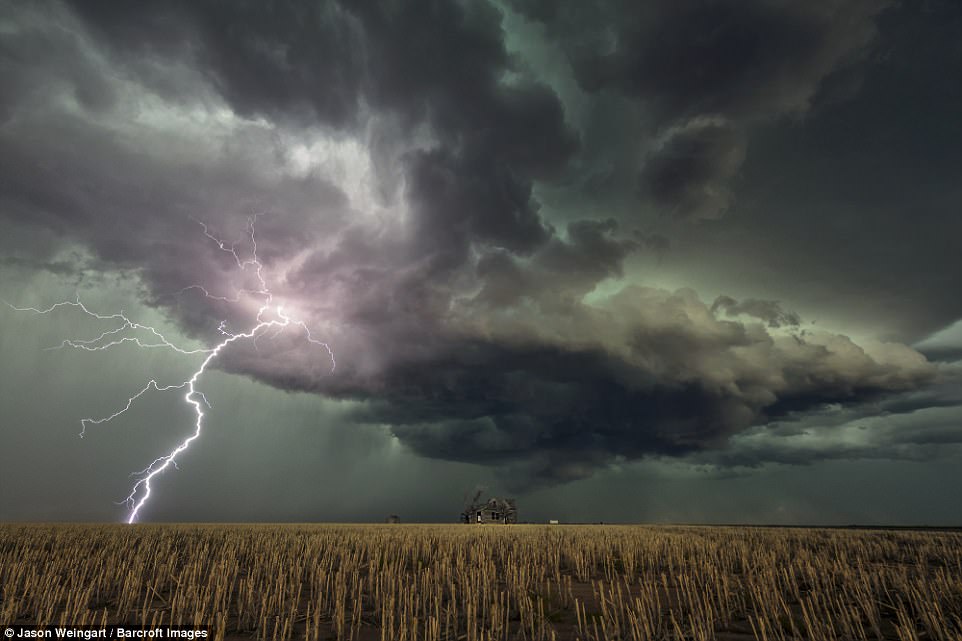 Capturing the moment: This stunning photograph shows cloud to ground lightning captured during a May thunderstorm that took place in Boise, Oklahoma. 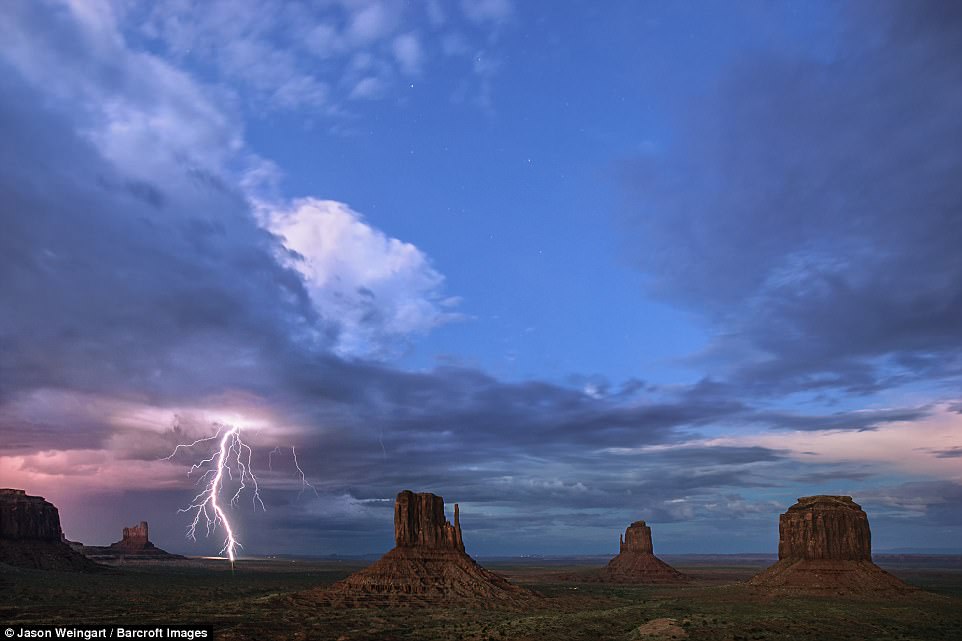 Like magic: A powerful lighting bolt strikes the ground in the famous Monument Valley on a July day in Arizona 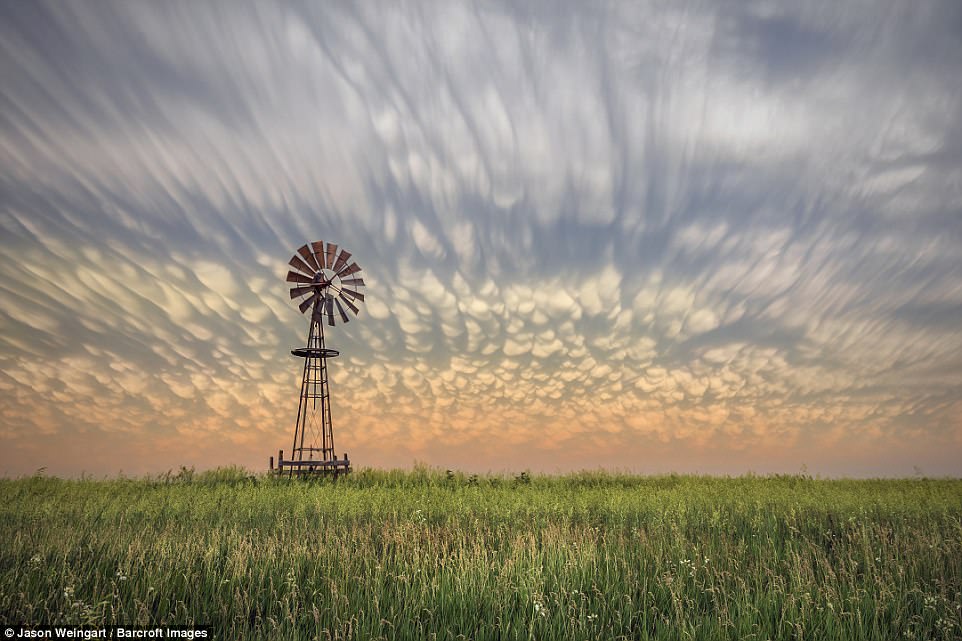 The best one: This timelapse photo of mammatus clouds in O’Neill, Nebraska is storm-chaser Jason Weingart’s favourite 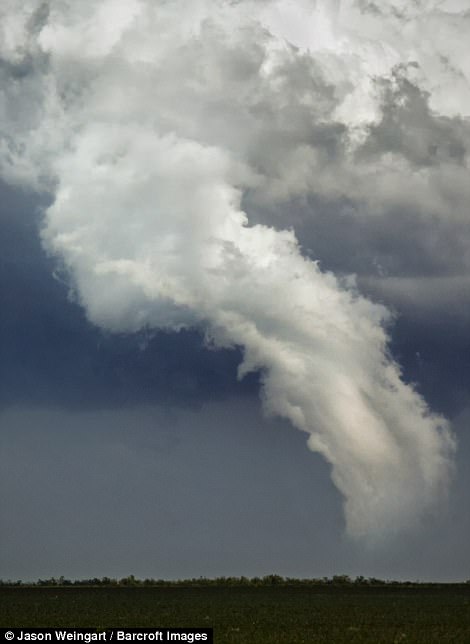 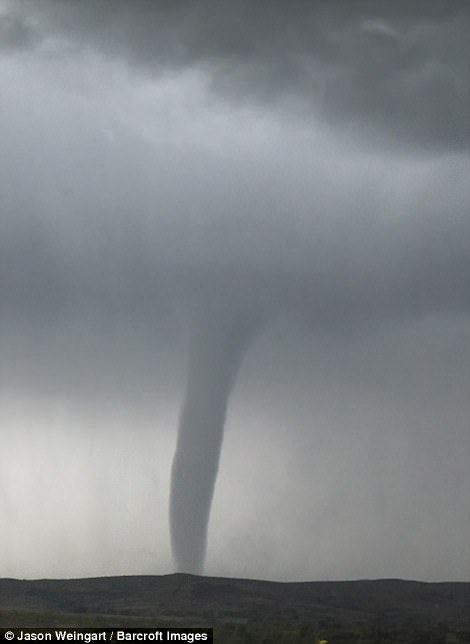 Havoc: A landspout tornado in Elk City, Oklahoma, and an elephant trunk tornado in McLean, Texas, both pictured in May 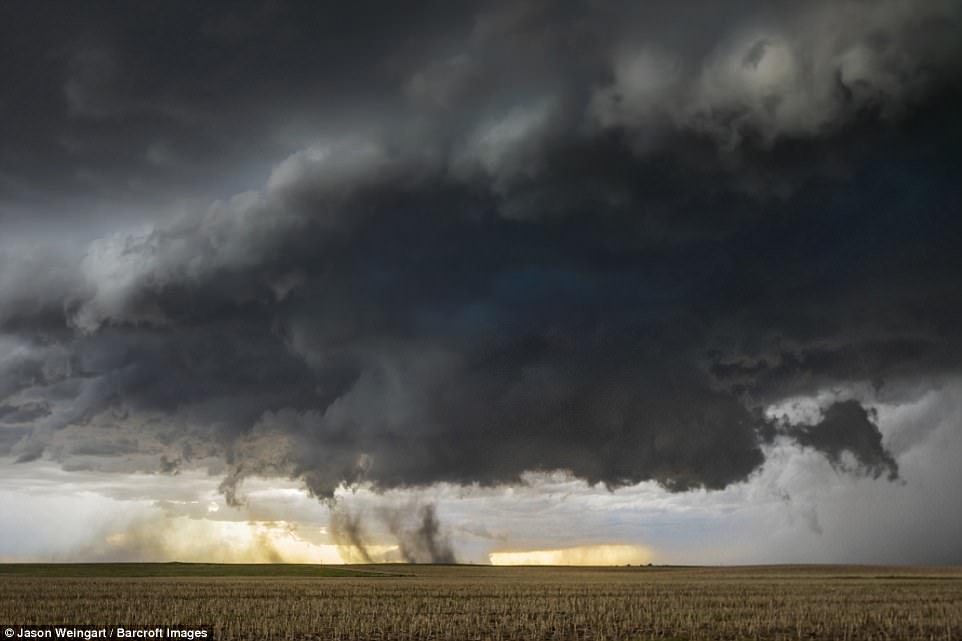 Short and powerful: A Gustnado – a ‘gust front tornado’ that looks like a tornado but is a thunderstorm – is pictured by Mr Weingart on May 26, in Kirk, Colorado 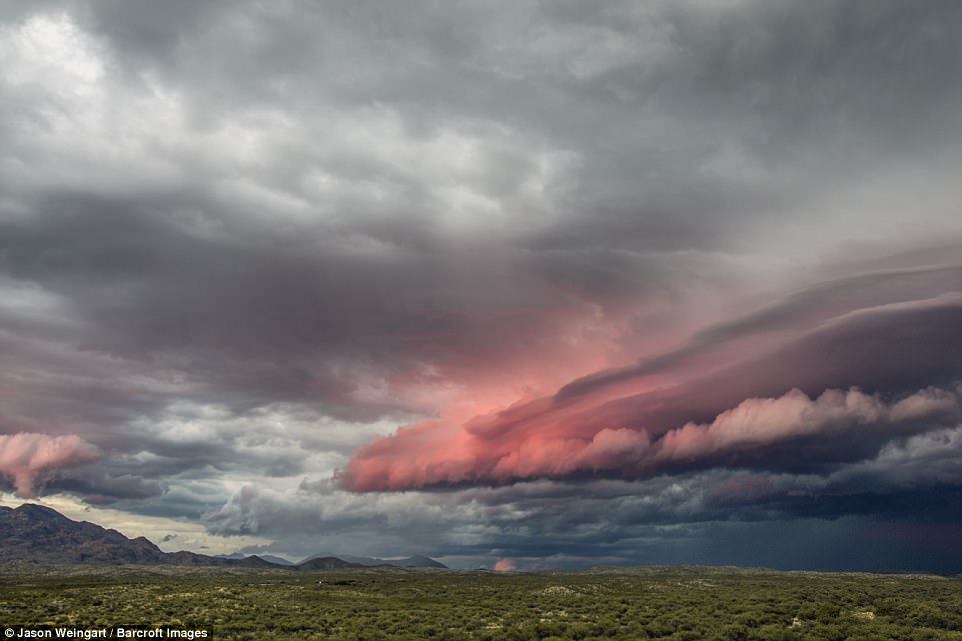 Mr Weingart attempted to follow Harvey’s path but struggled to keep up with seemingly unstoppable storm.

He said: ‘Chasing Hurricane Harvey was especially difficult. It was just one of those storms that never ended.

‘Intercepting the eyewall of a Category 4 hurricane was intense, but nothing prepared me for assisting in high water rescues in Houston.

‘Venturing into those flood waters was the scariest moment of my life. Way worse than any tornado I have seem, including the largest in recorded history.’

Although 2017 has been a tough year in storm chasing, Mr Weingart says has also seen some stunning displays of nature’s fiercest weather. 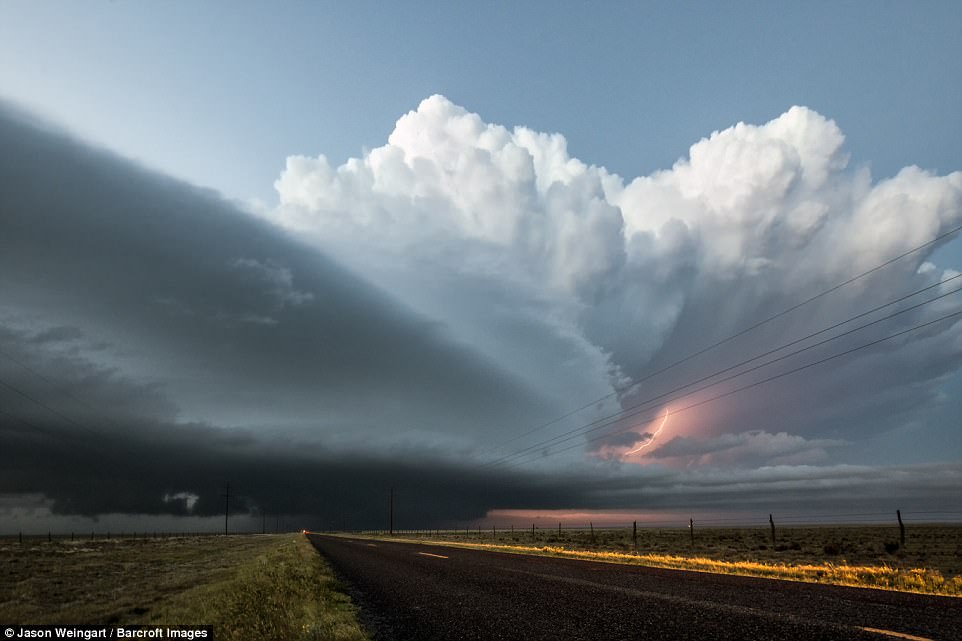 Superpowers: A supercell – a rare but very powerful thunderstorm – is pictured on May 09 in Tatum, New Mexico 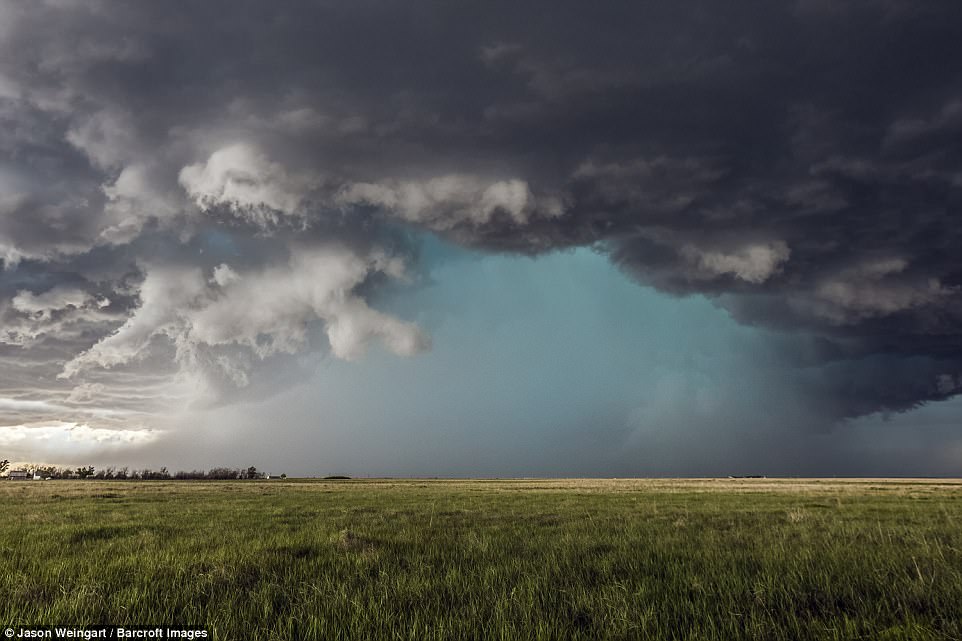 All hail the storm: A large hail is seen falling in the core of a thunderstorm on May 26, in Cope, Colorado 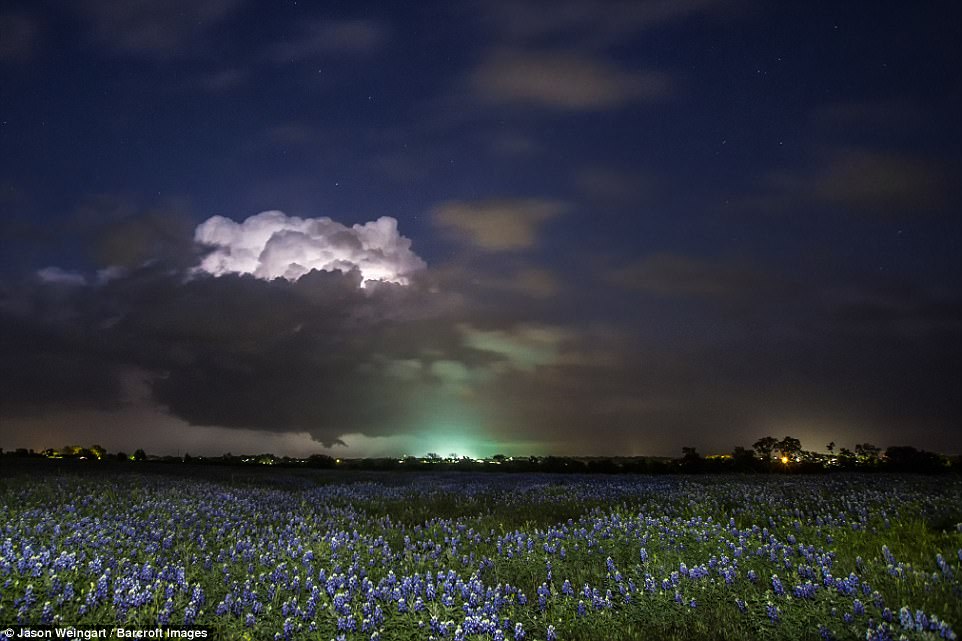 Big fan: Jason Weingart has been an avid storm chaser for more than eight years, capturing weather events such as this  supercell with wall cloud in March, in Brenham, Texas 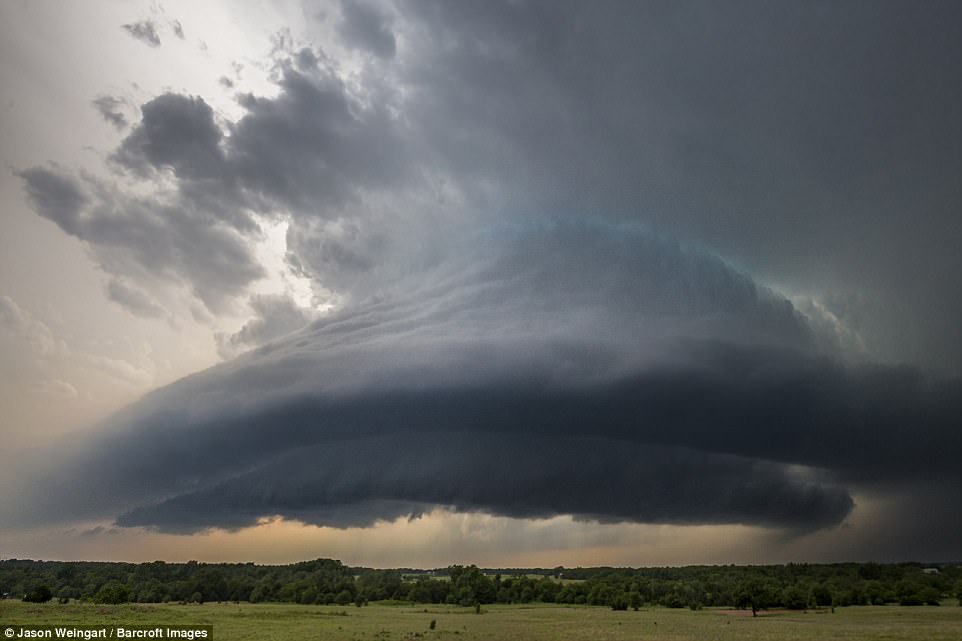 Identified flying object: A mesocyclone – a vortex of air within a convective storm – seen on May 18, in Enid, Oklahoma 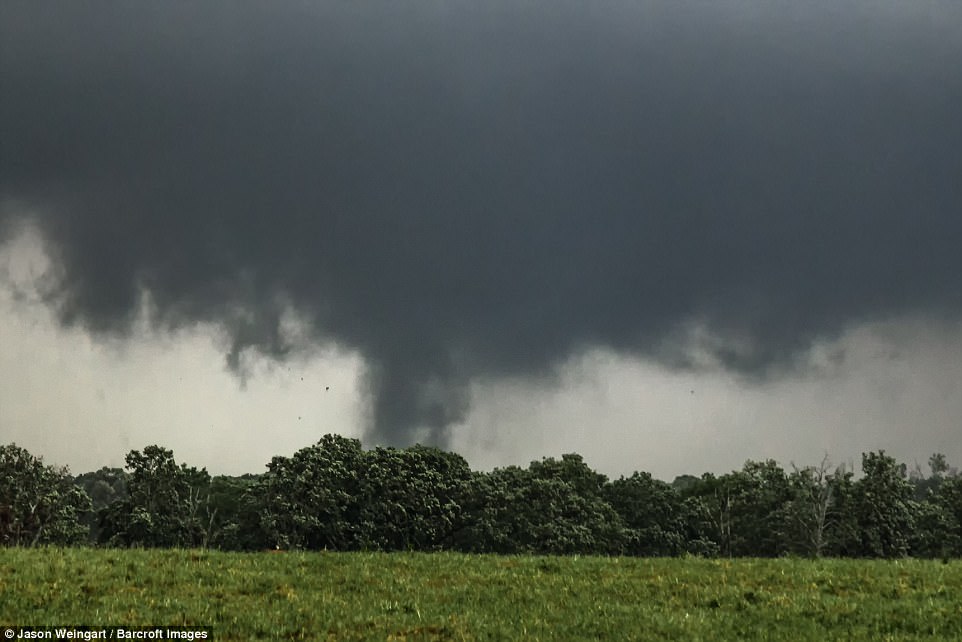 Tornado coming through: A strong tornado is seen lofting trees  in Canton, Texas in April this year 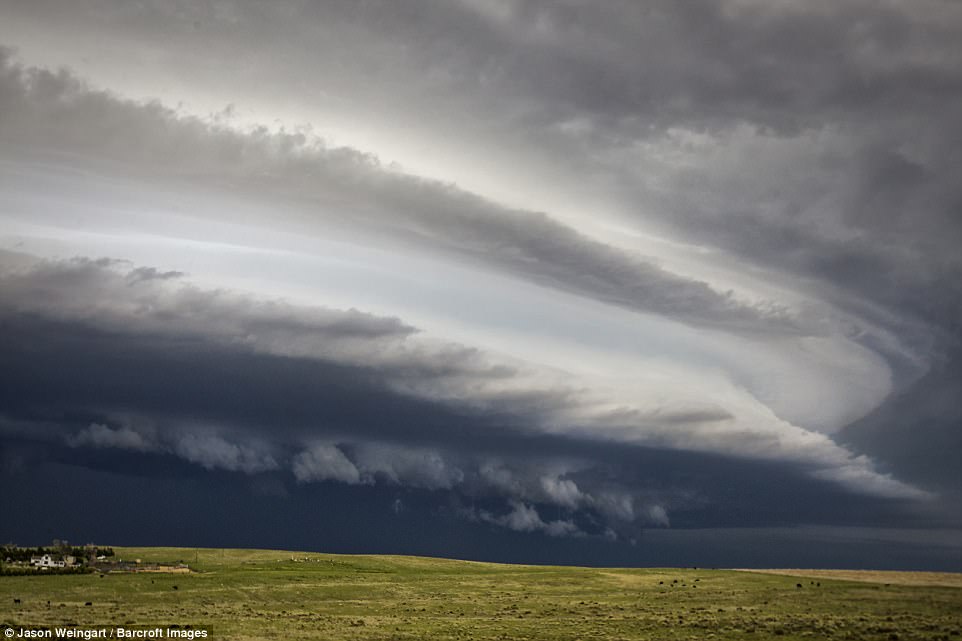 Incoming: A Mesocyclone storm cell is pictured on May 26, in Kirk, Colorado. The size of the storm becomes clear when compared to the farm pictured bottom left

He said: ‘My favourite timelapse is the mammatus clouds on June 13th in O’Neill, Nebraska.

‘It was an especially tough chase day, very long drive. We called it quits a few hours before as storms were congealing into a line and the tornado threat was diminished.

‘We noticed the mammatus, barely visible lit by the bright sun, but once the sun got near the horizon, the true beauty of the sky was revealed.

‘It was a perfect scene; no danger, no fear. Just cameras and an incredible sky, to me that’s what storm chasing is all about.’ 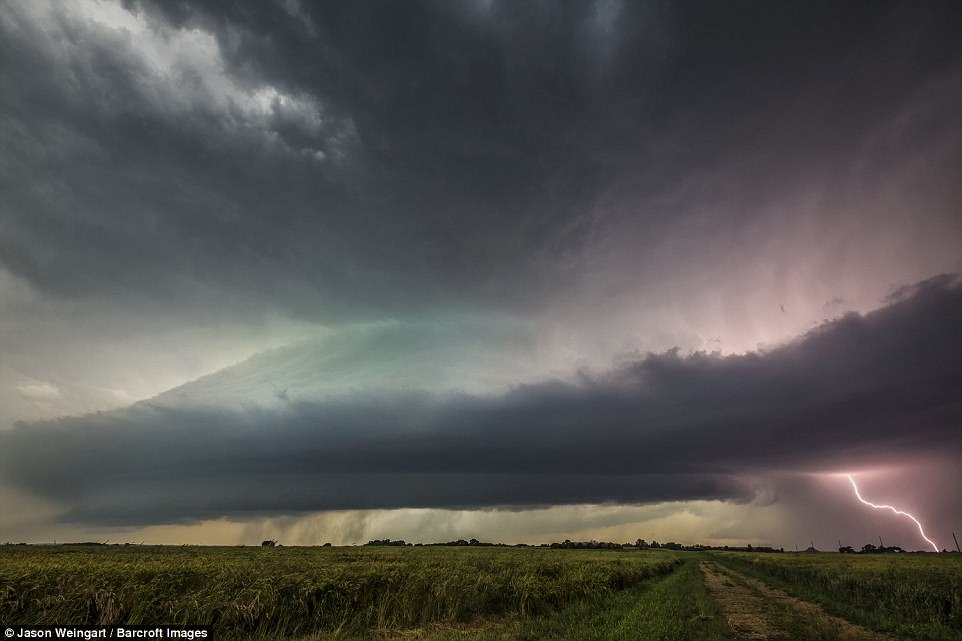 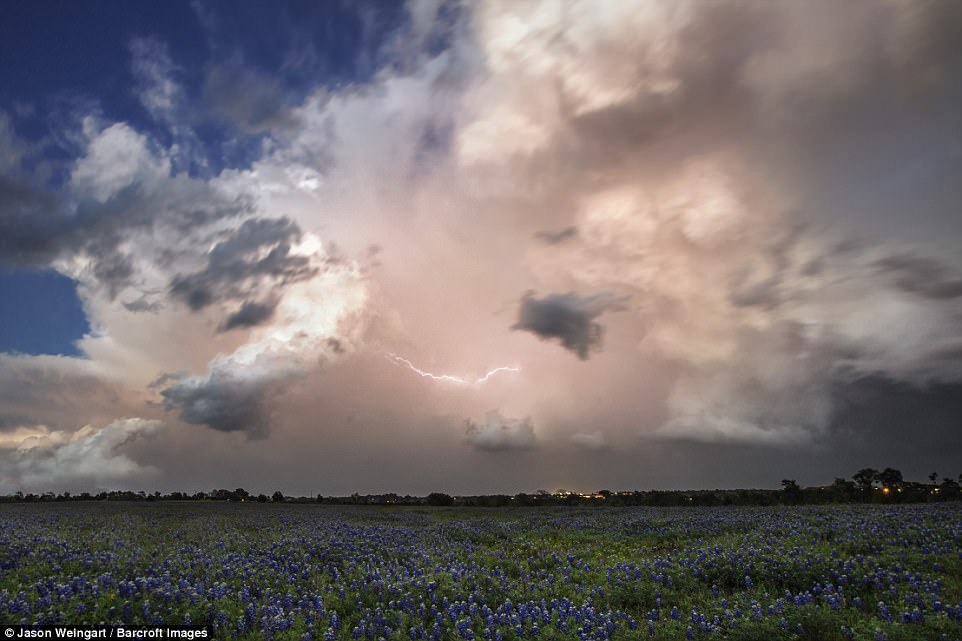 Pretty picture: A Supercell thunderstorm pictured in the sky over a field of bluebonnets on March 24, in Brenham, Texas 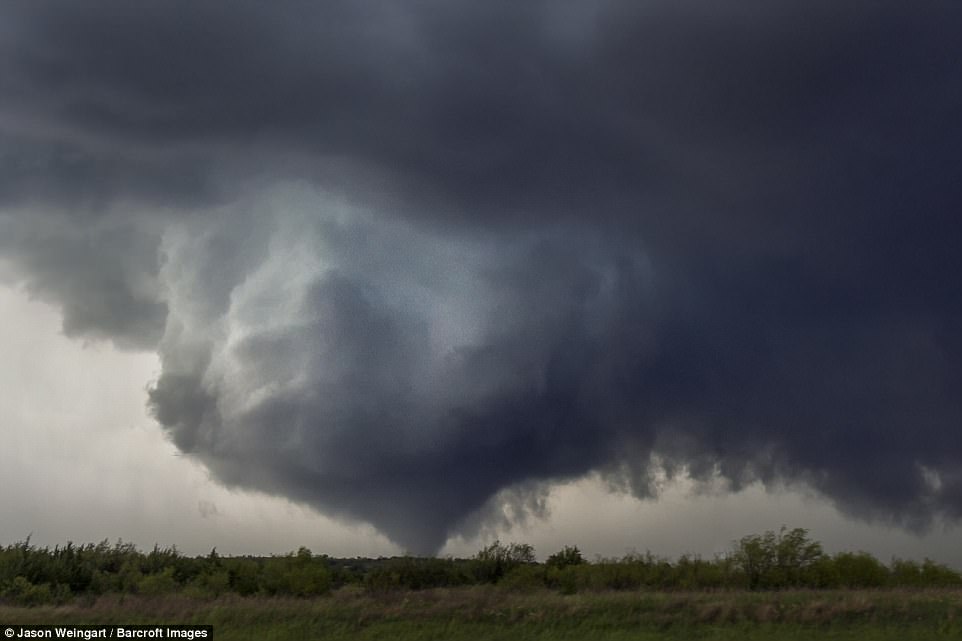 Chasing the dream: Mr Weingart witnessed an incredible 14 tornadoes in April and May, such as this collar cloud and cone tornado pictured on May 18, in Waynoka, Oklahoma 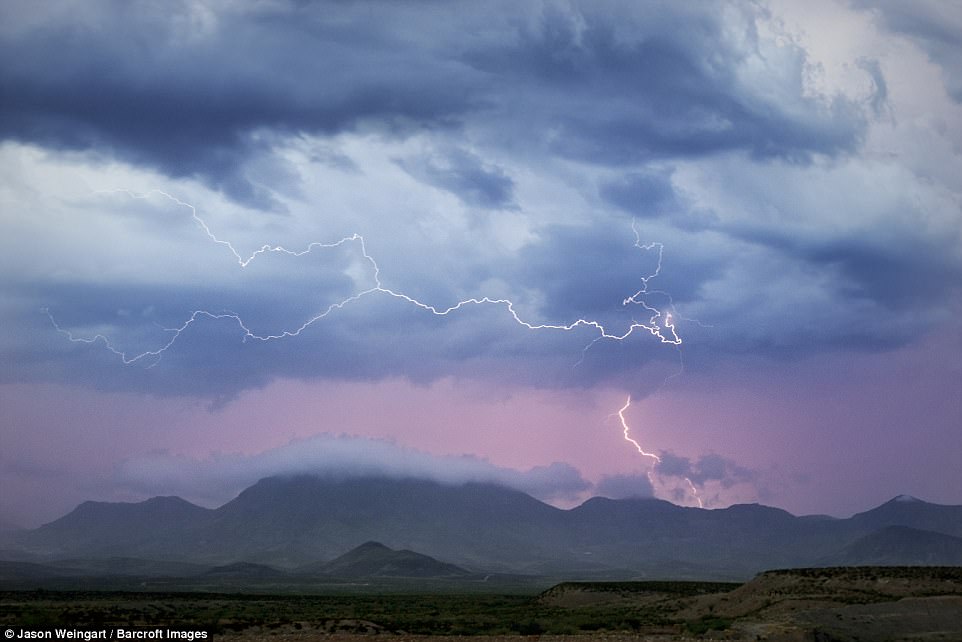 Come rain or shine: A monsoon thunderstorm is pictured on July 29, in Safford, Arizona 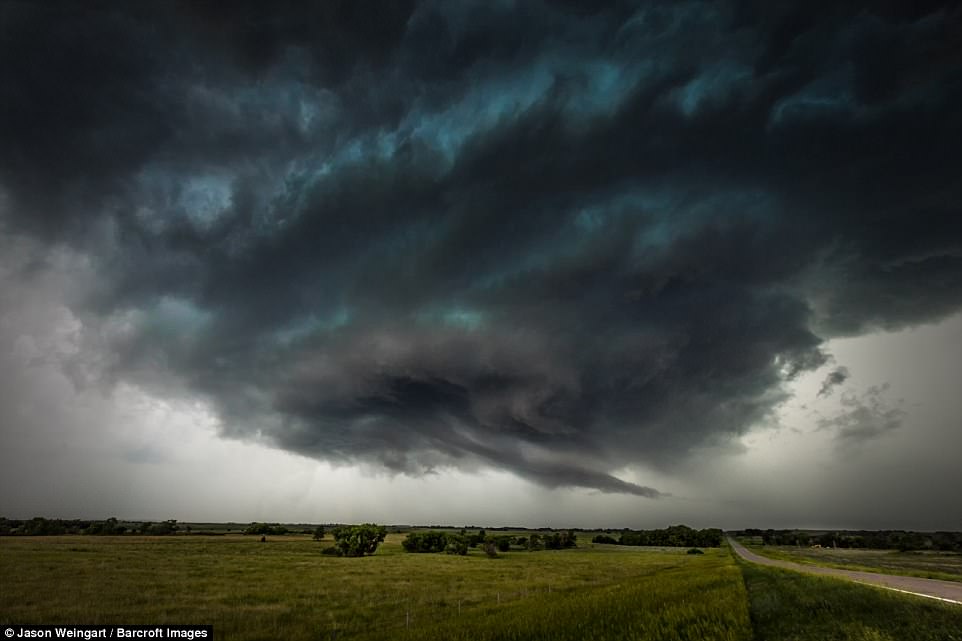 Electrifying: A cloud wall pictured in Naper, Nebraska, in mid-June this year 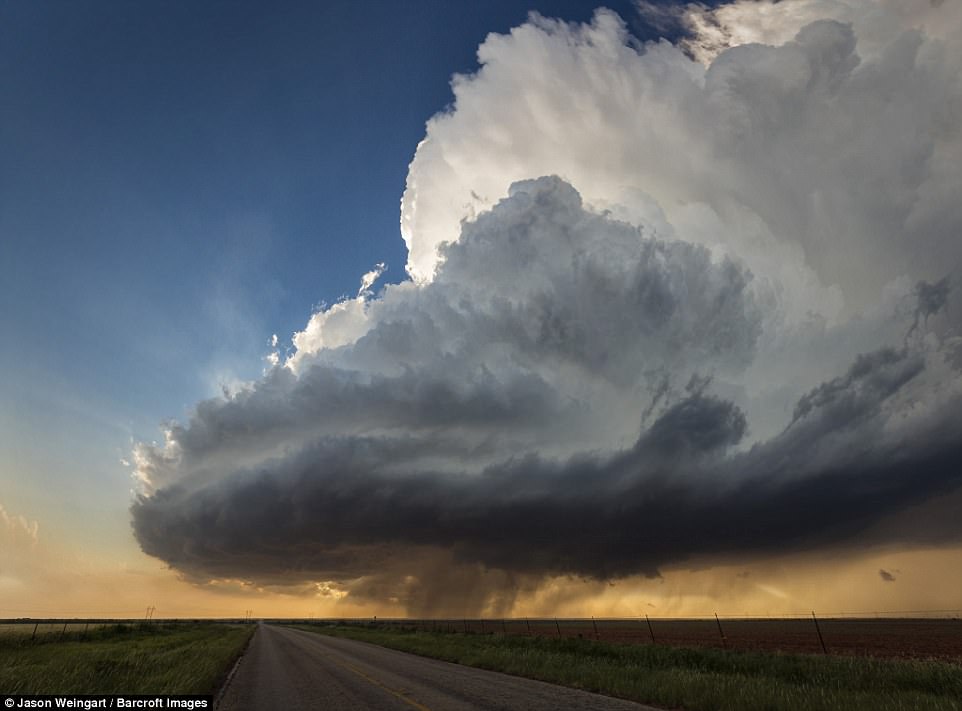 Colourful display: A white clouded Mesocyclone pictured on May 10 in Vernon, Texas