The effects of Tropical Storm Harvey – which brought 19 trillion gallons of rain to the continental US – are made horrifyingly clear in these startling images.

This before-and-after sequence shows how a Texas highway was completely submerged by water – so much so that waves can be seen rolling feet above the asphalt.

The photos, taken on the I-10 between Houston and Beaumont on Tuesday, are a chilling glimpse of how fragile our hold on this planet is. Photographer Logan Wheat also took pictures of cows up to their chins in the roiling water.

‘It’s scary to know there were still cows out there and alive,’ Wheat said, ‘but it puts a knot in my throat to know we couldn’t get them out.’ 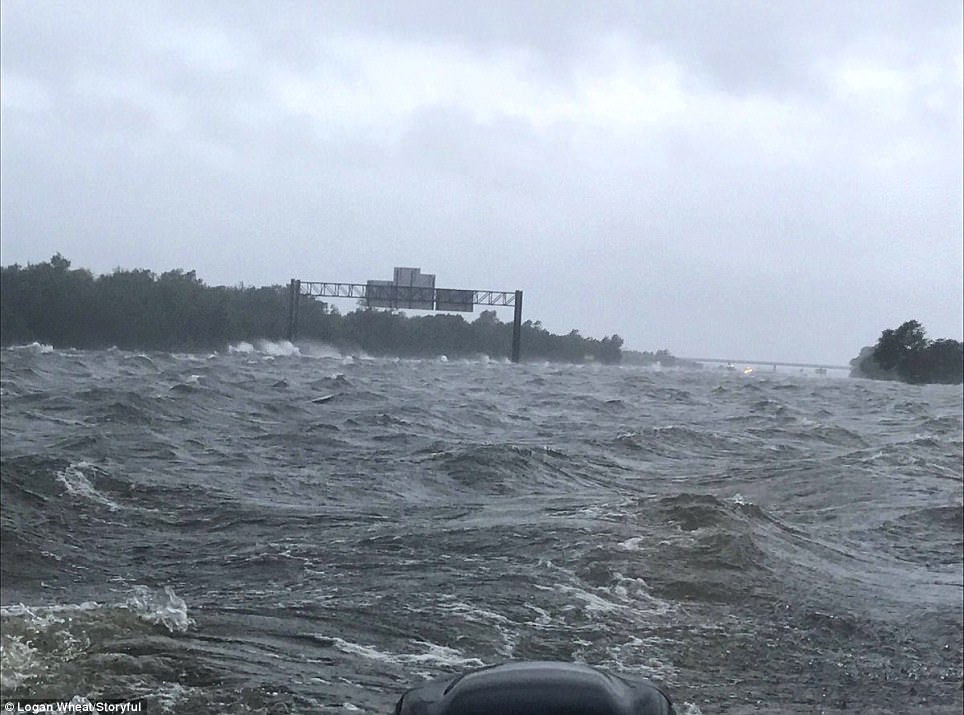 MOVE SLIDER TO COMPARE IMAGES: These photographs show how the I-10 between Houston and Beaumont was submerged during Tropical Storm Harvey on Tuesday – to the point that waves can be seen rolling feet above the asphalt 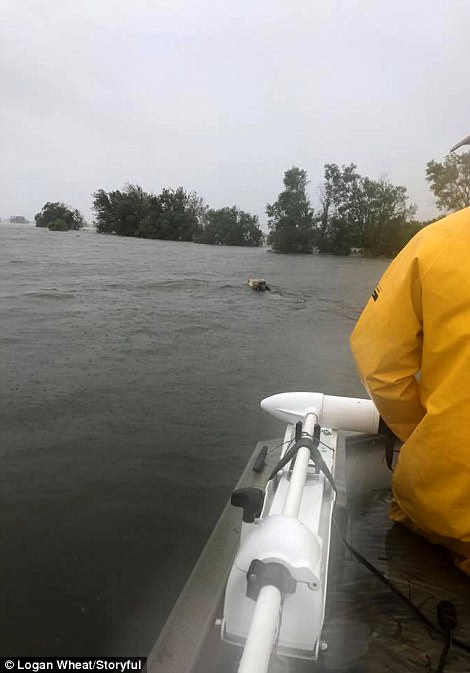 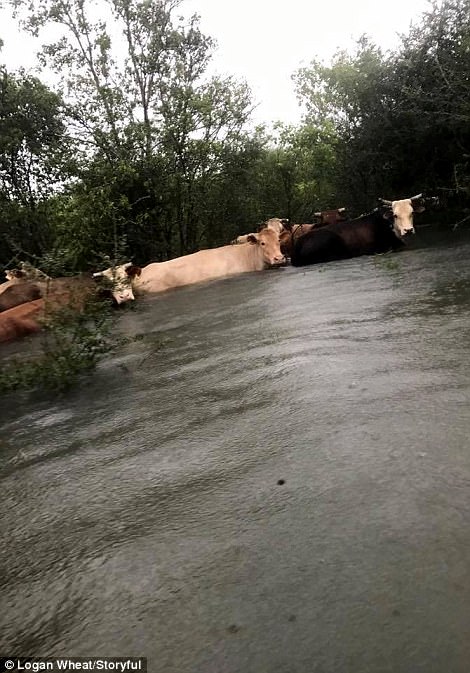 Logan Wheat, who took the photos, headed out onto the Interstate on a boat (left). He also noted what appeared to be doomed cattle (right). He later said ‘it puts a knot in my throat to know we couldn’t get them out.’

The first image, taken near Winnie, shows an otherwise unremarkable stretch of highway, rolling out into the horizon.

But the photograph taken Tuesday looks like it came from another world.

Although it’s hard to judge quite how deep the water is from this distance, it looks to be at least eight feet high – certainly over the roofs of most cars.

Not far from this spot, convention centers in Houston were overloaded with tens of thousands of evacuees.

More than half of those were crammed into the city’s convention center – which was only planned to take around 5,000 people.

The George R Brown Convention Center in downtown Houston, Texas, has a capacity of up to 5,000 people, but Monday night 9,021 people stayed in the center, many sleeping on chairs and on the floor because of a shortage of cots.

Others were being sent to the Toyota Center, the arena that is home to the Houston Rockets NBA team.

Houston mayor Sylvester Turner said the convention center would remain as the primary shelter in Houston. 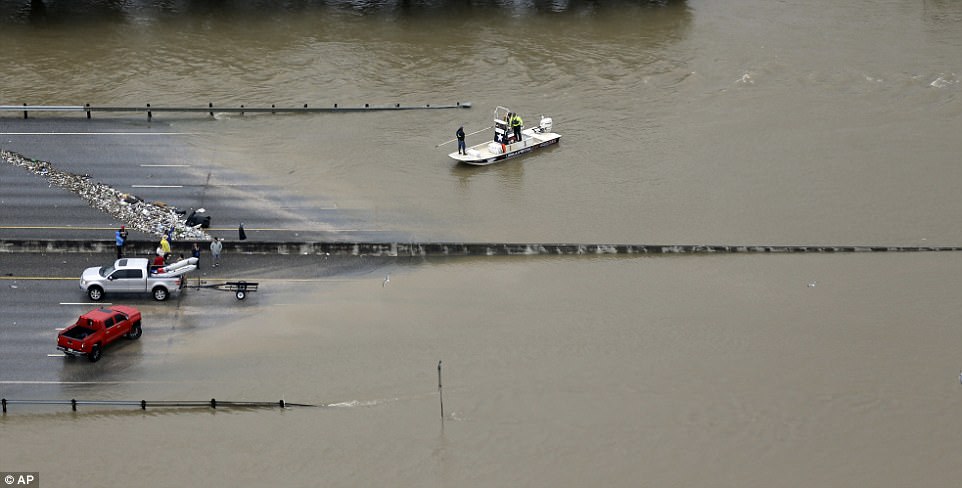 The I-10 can also be seen in this photo. A line of trash (top-left, above the trucks) appears to have been left behind after a little of the water has receded 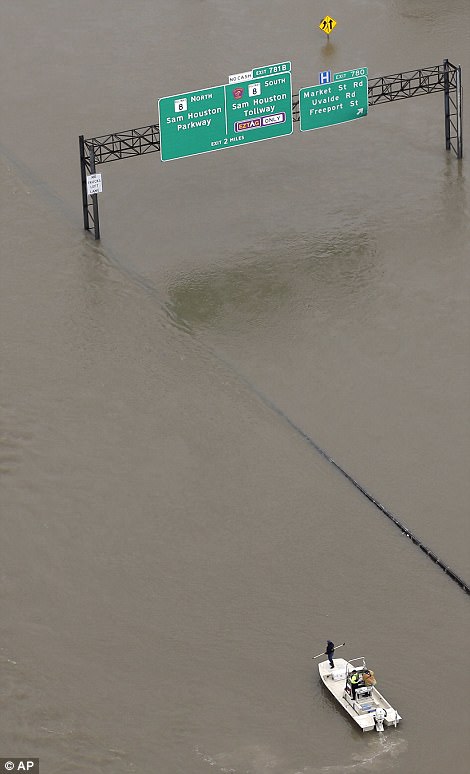 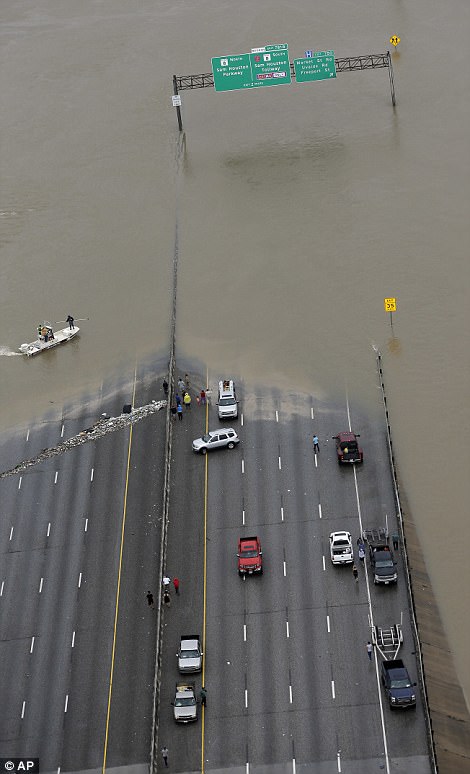 The devastation on the I-10 was immense – and stretched out into the wider area around it. Trucks with boat pulls were spotted at the scene – the only way to travel further down the road on Tuesday

The largely flat area around the I-10 has been devastated by the immense rainfall. In Houston alone, tens of thousands have been left in overcrowded  shelters set up in convention centers

That is the record for Texas and the continental US, but does not pass the record of 52 inches of rain that fell in Kauai, Hawaii, in 1950 during Tropical Cyclone Hiki.

That record was set before Hawaii became a state.

Previously, the largest amount of rainfall was the 48 inches that fell on Medina, Texas, in 1978, under Tropical Storm Amelia.

There are initial reports that at least 18 people have died from the storm and its aftermath.

However, the complete death toll can’t be fully counted until after the floodwaters recede.

And although the military has been limited in its ability to help in rescue and recovery efforts by weather and flooding, Air Force Major General James Witham said up to 30,000 National Guard troops could be called on to help in Texas.