Images that will restore your faith in humanity

Sometimes it seems as if the world’s generous and helpful people have done a disappearing act.

These photographs of acts of kindness and cute scenarios from around the world serve as a reminder that they’re actually all still out there.

There’s the passer-by who put an umbrella in the open sunroof of a stranger’s car to protect it from the rain, for example, and the high school student who bought Vans trainers for the kids in his school who need special assistance.

And your heart will leap when you see the letter some school children wrote to their city council to build a gingerbread community – and the reply they got granting them permission ‘on the condition the houses are cute and delicious’.

Equally adorable is the picture of a small dog curling up with a hot water bottle that his owner gave him.

Scroll down to have your faith in humanity topped back up.

A sunroof left open when it’s raining is enough to dampen any driver’s spirits – so the car owner who forgot to close his during a downpour and returned to find an umbrella had been deployed by a passer-by to keep the seats dry would no doubt have been very pleasantly surprised. They even got to keep the umbrella 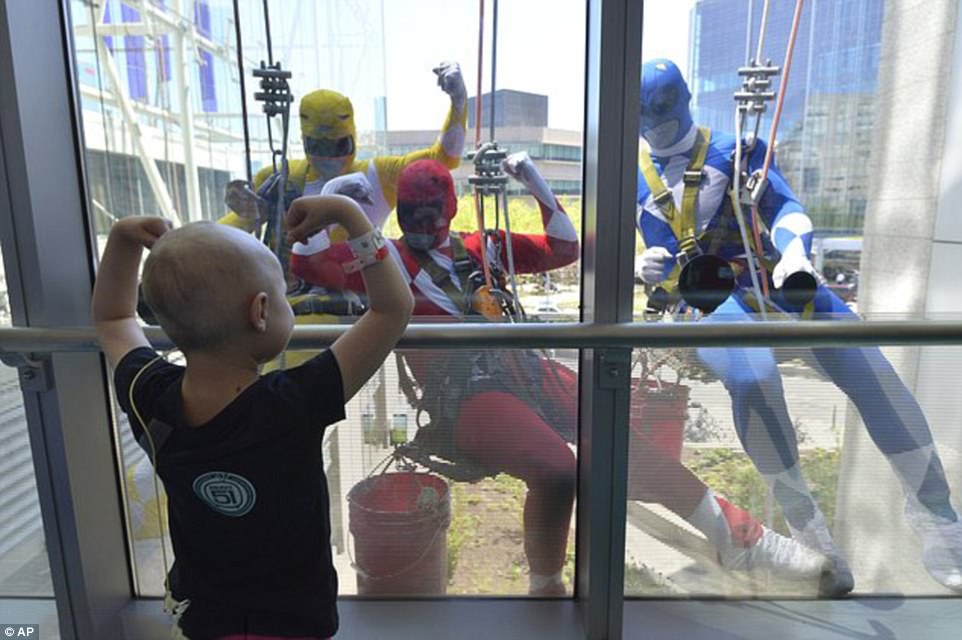 In April 2017 window washers dressed as Power Rangers dangled outside windows at the Children’s Hospital of Philadelphia, delighting the children. One girl battling cancer flexed her muscles for them through the windows of the oncology unit; the Power Rangers did the same 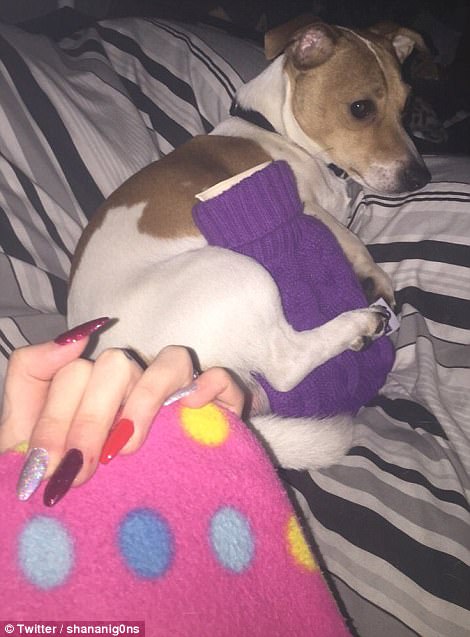 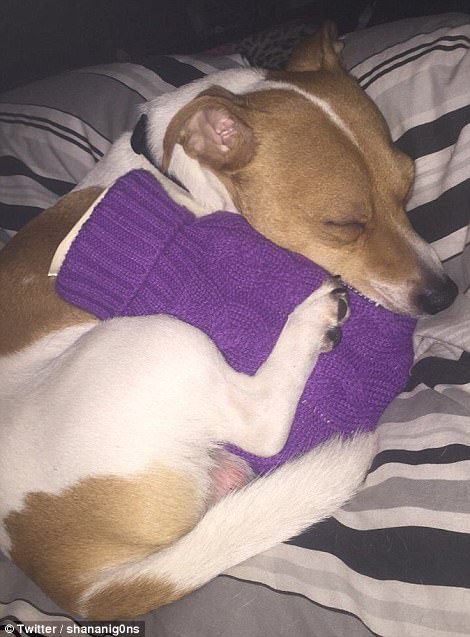 Freelance fine artist Shannon Russell, 21, from Angus in Scotland, posted these adorable pictures of her dog on Twitter, with the caption ‘I heated up my small hot water bottle for Charlie cause he’s been shivering all night and he’s so happy I want to cry’. Ms Russell said that Charlie ‘has always been a cuddly puppy and will jump on your legs so you will pick him up and cuddle him like a baby’ 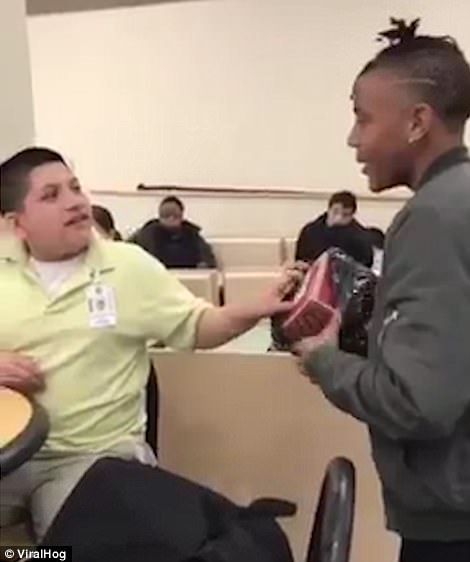 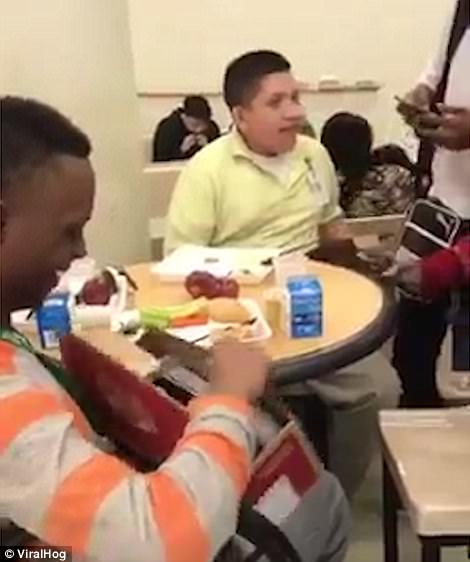 Roderick Mathis is a 17-year-old with a heart of gold. The senior at Lancaster High School in Texas is friends with the kids who need special assistance, and when they told him they liked his Vans trainers, he bought some for them, much to their delight (pictured). He said: ‘I speak and check on them everyday and make sure they’re doing good. I surprised them one lunchtime with the shoes’ 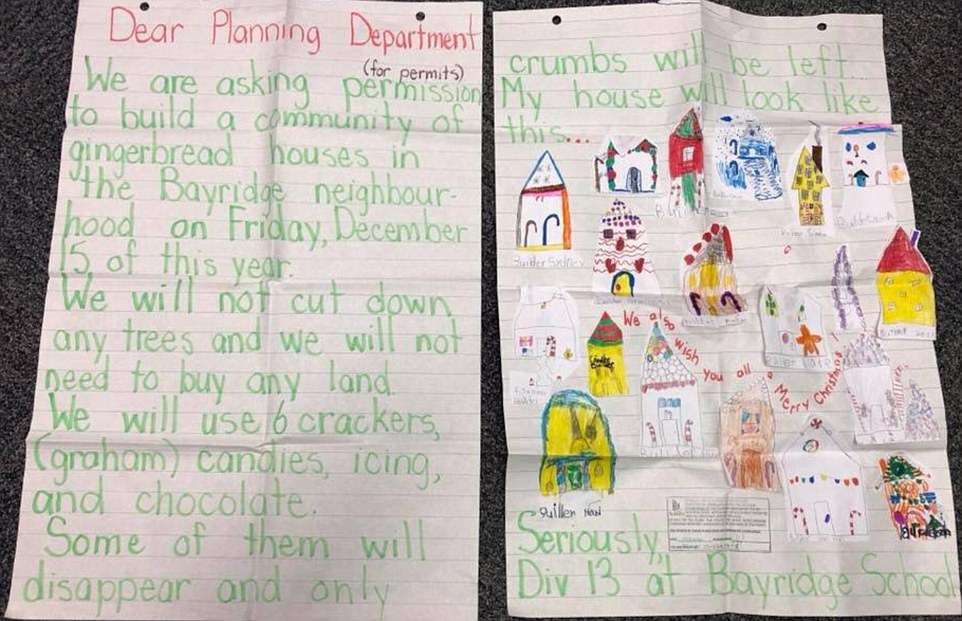 Last December a grade one class at Bayridge Elementary School in the Canadian city of Surrey, British Columbia, wrote a letter to the city’s building division, asking for permission to build  a ‘community of gingerbread houses’. And the reply from the planning department is wonderful… 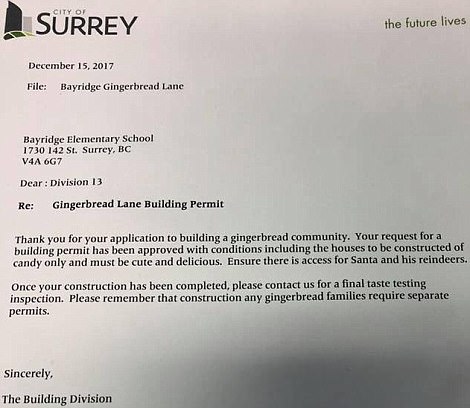 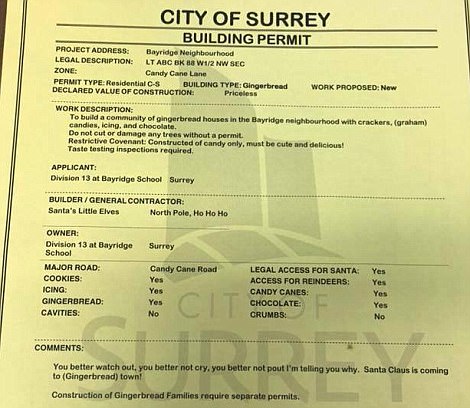 … because it not only granted permission (pictured), but it explained that there were certain conditions, which included that ‘the houses must be constructed of candy only and must be cute and delicious’. The reply added: ‘Ensure there is access for Santa and his reindeers. Once your construction has been completed please contact us for a final taste testing inspection.’ The children’s teacher, Monique van Teunenbroek, told MailOnline Travel that her ‘grade one class was making gingerbread houses on December 15 and I explained to them that it would be a good joke, to spread some Christmas cheer, and ask the planning department if we could build them’. She added: ‘I explained that people needed permission (permits) to build houses and chop down trees and that the planning department would enjoy the joke’ 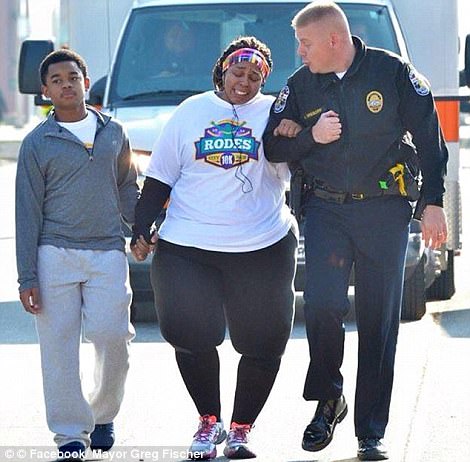 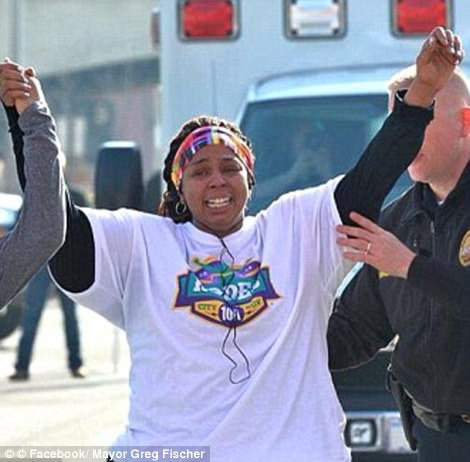 This is the touching moment in 2015 that a Kentucky police officer grabbed the hand of a woman who was struggling during a 10k race and helped her cross the finish line. Asia Ford was celebrating her 200lb weight loss by participating in the Rodes City Run in Louisville. But after hitting the fourth mile, she became dizzy and found it hard to breathe. Ford wrote on her Facebook that she had forgotten to eat that morning and was still recovering from a bout of pneumonia. But when paramedics checked on the mother-of-three she said there was no way she was going to quit. Her motivation inspired Lt Aubrey Gregory, who was working the race nearby

In 2015 photographs of a male surgeon calming a two-year-old girl emerged on Chinese social media. The young girl was said to have been sobbing uncontrollably before her heart surgery when the doctor stepped in. This heart-warming scene was captured on September 18 at a hospital in Zhejiang, eastern China, reported People’s Daily Online. The surgeon, Shi Zhuo, Deputy Director of Cardiac Surgery at the children’s section of Zhejiang University Hospital, scooped her up and started playing her favourite cartoons on his phone 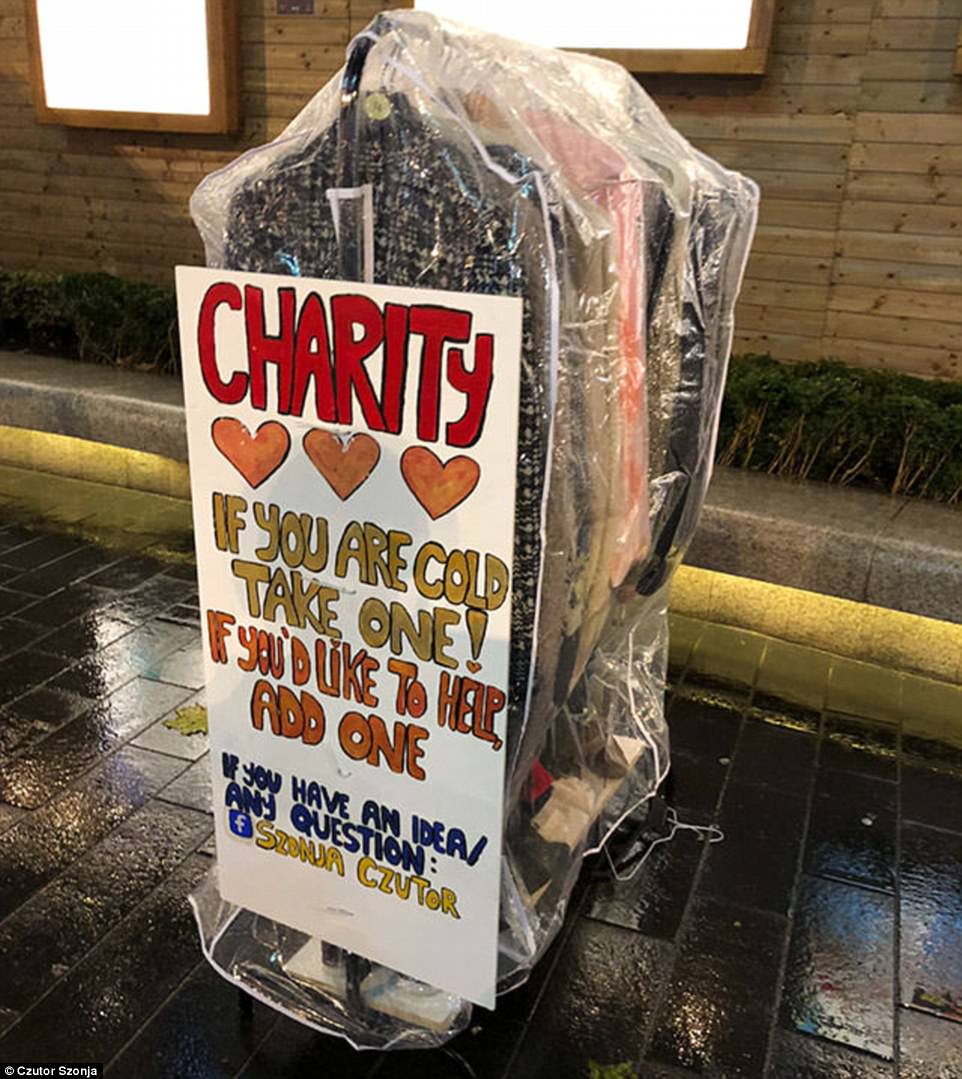 Czutor Szonja, from Szeged in Hungary, set up this charity clothing rail in London, where she now lives, for ‘anyone who’s cold’. The idea is that passers-by donate their coats 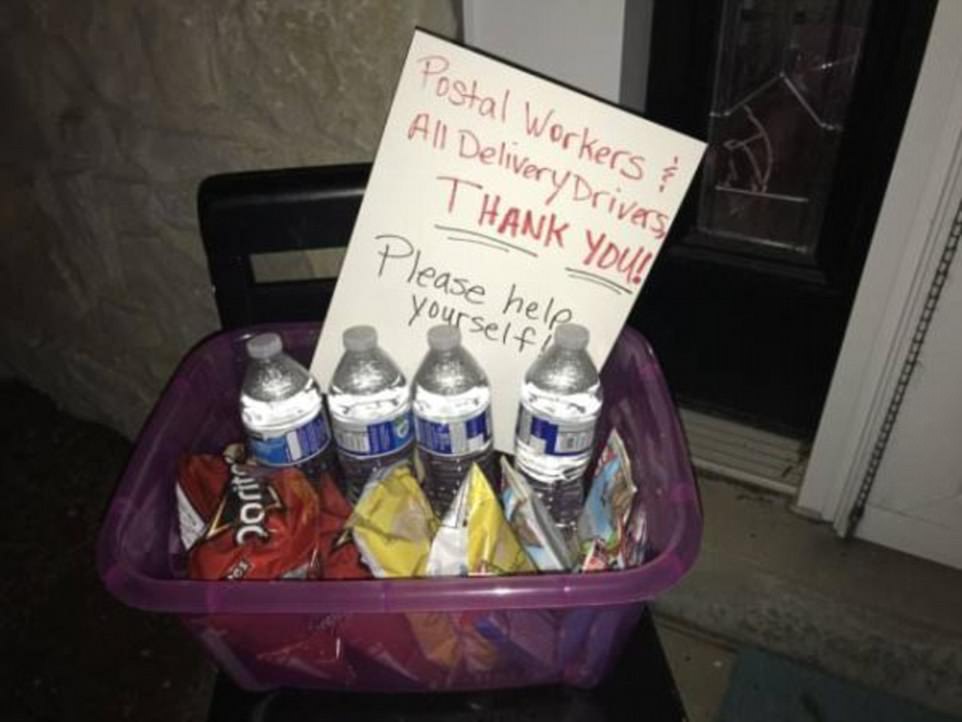 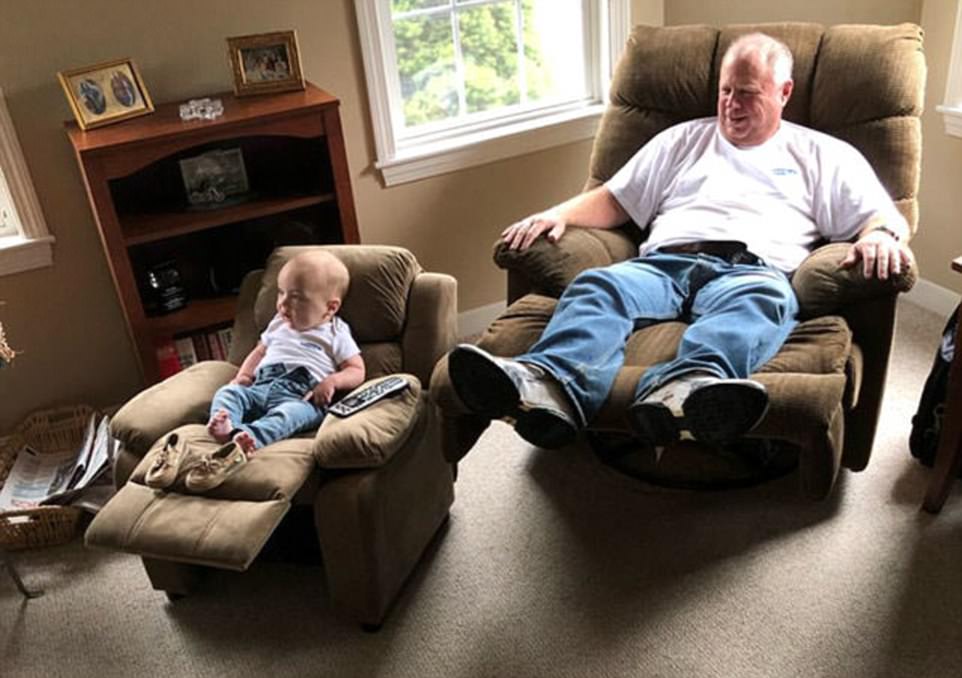 Aww-some: One family is ensuring that their way of dressing is passed down through the generations 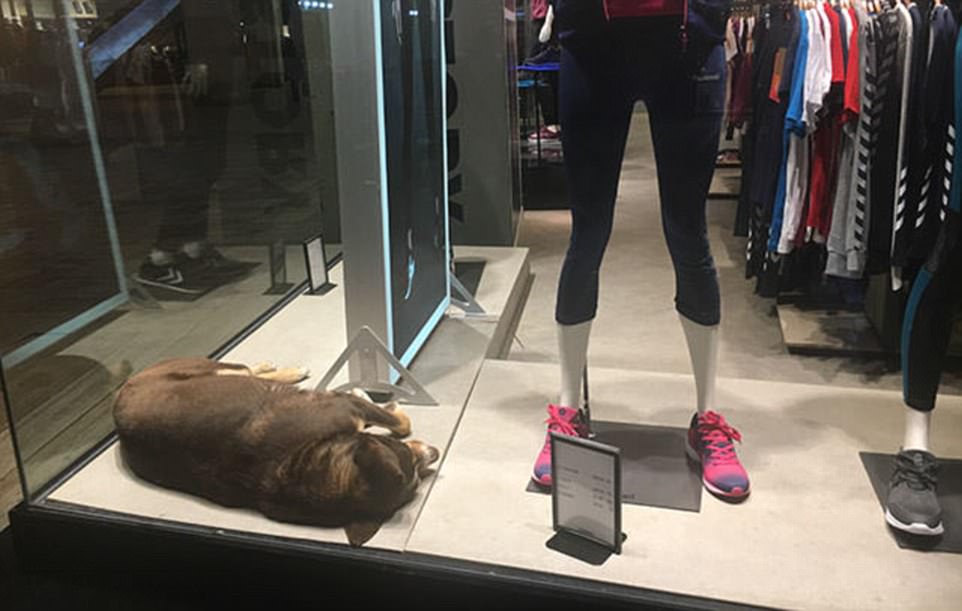