Immigration is a ‘serious problem’ but DACA OK says poll

DACA, the acronym for Deferred Action for Childhood Arrivals, allows so-called Dreamers, undocumented immigrants who came to the country as kids, to remain in the United States.

While 68 percent of Americans viewed illegal immigrants as a ‘serious problem,’ a similar percentage would like to see President Trump (pictured) keep DACA in place 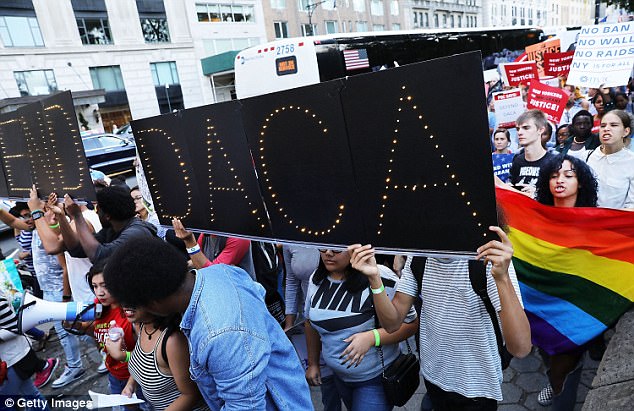 Immigration advocates took to the New York streets on Wednesday, passing by Trump Tower, in order to show support for DACA. Two-thirds of the country is with them, a new poll shows

Among the 68 percent who viewed undocumented immigrants as problematic, the biggest chunk of respondents, 40 percent, called them a very serious problem.

Another 28 percent called their existence in the country somewhat serious.

Twenty-two percent said the issue of undocumented immigrants it not too serious.

Just 8 percent said it wasn’t serious at all.

Despite such a large percentage of Americans voicing their concerns, a large percentage, 71 percent, said they believed undocumented immigrants working in the United States should have a pathway to a legal status.

Only about a quarter, 26 percent, thought those workers should be deported.

Additionally, a majority of respondents, 57 percent, said they thought immigration helps the United States more than it hurts the country.

On the flip side, 38 percent said it hurts the U.S. more than it helps.

Nearly half, 49 percent, said the immigrants living in their community don’t have much of an effect on Americans’ job opportunities.

Pollsters also asked Americans about President Trump’s controversial pardon of Sheriff Joe Arpaio, who faced prison time after blowing off a court order that demanded he stop the racial profiling of Latinos.

The poll found that 60 percent of Americans felt Trump did the wrong thing in pardoning the Arizona sheriff.

Another 34 percent were for Trump’s pardon.

While SurveyMonkey says it has access to a pool of nearly 3 million Americans, it may not be a representative sample of Americans’ views as less than 1 percent of the population will ever be sampled.

The organization says its sample is similar enough to the makeup of the larger pool of American adults.

They have assigned a plus or minus 1.4 percentage point error estimate to this particular survey.